When people think of Marvel movies, they usually think of the action-packed live-action films in the MCU. However, slowly but surely, Marvel has been expanding further into the realm of animated tv shows and films. The newest offering is MARVEL RISING, premiering on Disney XD. 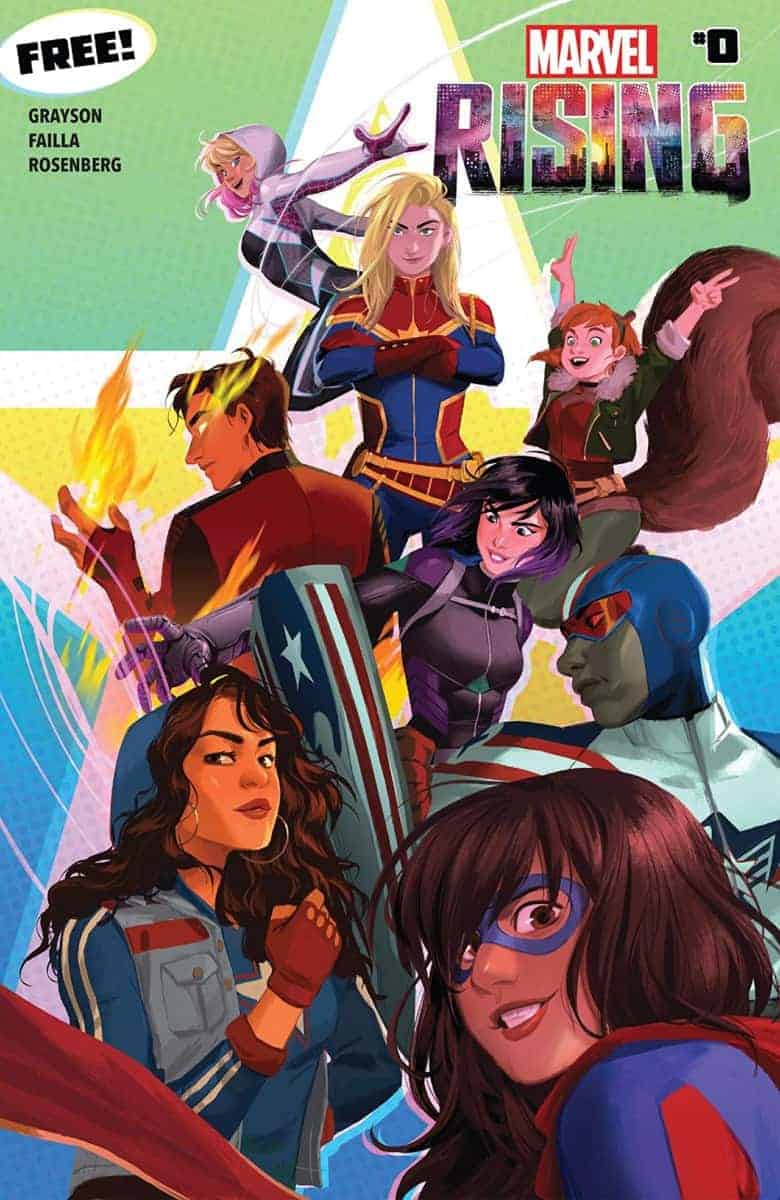 Directed by Alfred Gimeno and written by Mairghread Scott, MARVEL RISING’s aims to bring attention to newer and diverse characters. Unlike most superhero teams, the cast of MARVEL RISING features an almost entirely female crime-fighters. Though there’s not much precedent for most of these characters to join together in the comics, it’ll be interesting to see what stories they can have on screen!

What Is MARVEL RISING?

Back in December of 2017, Marvel announced the launch of a new animation initiative. The project is reported to be a multi-platform endeavor that will first consist of six four-minute animated shorts, followed up by a feature-length film. The shorts will focus on Spider-Gwen, on the run after being framed for the murder of her best friend, and the decision to change her in-universe name to Ghost Spider. Ms. Marvel, Squirrel Girl, and Patriot are sent to bring her to the authorities, highlighting their initial conflict before coming together as a team. A trailer went up on July 16th of this year.

This brief dip into the animated world will be titled MARVEL RISING: INITIATIVE, hitting Disney XD on August 13th. The feature film, titled MARVEL RISING: SECRET WARRIORS, will hit Disney XD later this fall. In addition to the shorts and the movie, a series of comic book tie-ins were released in May, depicting events such as the first team-up of Ms. Marvel and Squirrel Girl. 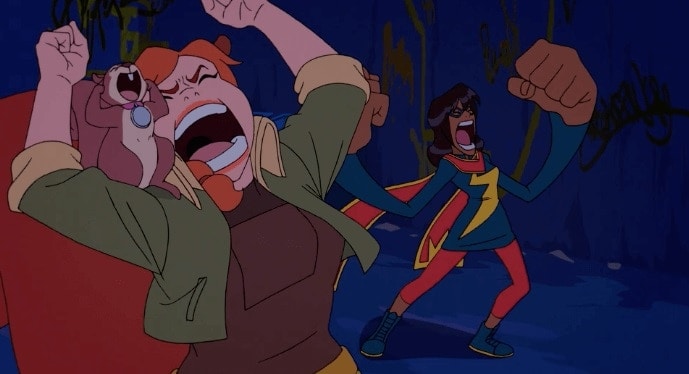 During the MARVEL RISING panel at San Diego Comic-Con, SVP of Animation and Family Entertainment Cort Lane cites female fandom as the primary motivation for creating the show and movie. “There’s been this exponential growth of fandom between women and girls… There was clearly this need, so we had lots of conversations with girls and they were dying for something like this,” Lane says.

This touches upon a theme seen pretty consistently throughout the SDCC panel and press for MARVEL RISING in general. In a Youtube video, co-executive producer and VP of Content and Character Development Sana Amanat says MARVEL RISING is

Who Are The MARVEL RISING Heroes?

The rag-tag group of heroes thrown together for MARVEL RISING is pretty uncommon. Spider-Gwen exists in an entirely different universe from her on-screen counterparts in the comics. Ms. Marvel was an actual Avenger, who now leads a different team called the Champions. Squirrel Girl single-handedly defeated Thanos and Galactus. If only she had been in INFINITY WAR!

A brief synopsis of the shorts tells us that Patriot will join Ms. Marvel and Squirrel Girl in the hunt to apprehend Ghost Spider. The version of Patriot used in MARVEL RISING will not be Eli Bradley, who originally appeared as part of the Young Avengers. Instead the newest incarnation of the character, Rayshaun Lucas will make his debut.

A teen activist, Patriot idolizes Sam Wilson as the Falcon. He obtains his own suit built by Riri Williams, later becoming Falcon’s sidekick and a hero in his own right. 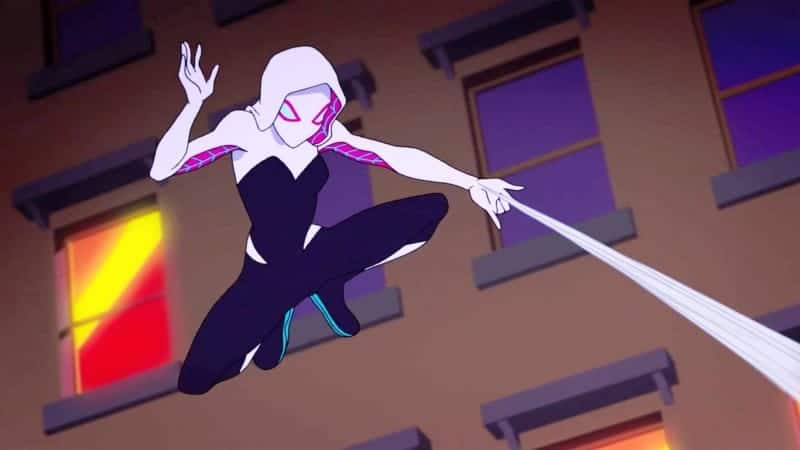 Miss America Chavez will also be joining the team. Miss America’s most popularly known for her run with the YOUNG AVENGERS, cementing herself as a hero who can literally kick portals into the universe and take names.

America Chavez: She’s Here, She’s Queer, Get Used To It

Like Ms. Marvel, teammates Quake and Inferno are also Inhumans. Inhumans are a separate species who, upon exposure to the Terrigen Mist, develop powers. MARVEL RISING will not, in fact, be Quake’s first appearance on screen. Quake appears in AGENTS OF S.H.I.E.L.D. portrayed by Chloe Bennett, who will also be voicing her on the show.

Since Quake already exists in Marvel television, the obvious question asked at San Diego Comic-Con was how much the two versions of the character might overlap. Bennett responded,

“There are actually certain things… there’s stuff being brought from both sides.” 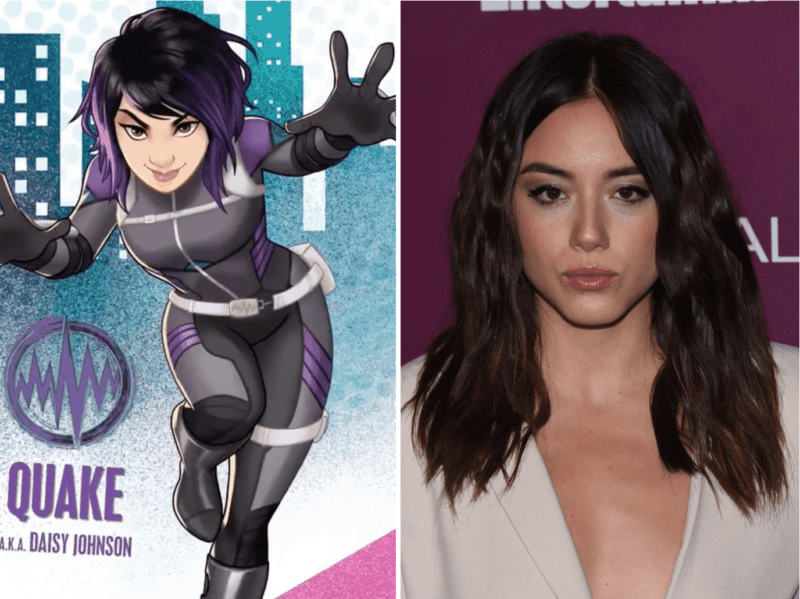 Similarly, Bennett likened MARVEL RISING’s Quake to season one AGENTS OF S.H.I.E.L.D. Skye. She’s aged down a bit for the animated series, taking on a more innocent and grounded persona. Dove Cameron, who voices Spider-Gwen, has also been on AGENTS OF S.H.I.E.L.D. as villain Ruby. Both Cameron and Bennett during the SDCC panel described the relationship between Spider-Gwen and Quake to be similar to the dynamic between Ruby and Daisy.

What Will MARVEL RISING Be About?

It appears that the six shorts preceding the film will draw heavily from Spider-Gwen’s origin. In Gwen’s universe, Peter Parker isn’t Spider-man. Instead, Peter’s just an intensely bullied kid who turns himself into the Lizard to get revenge. Despite being Gwen’s best friend, Peter doesn’t know about her fledgling spider abilities. After Gwen stops Peter in full Lizard mode, he dies. The community (and the authorities) pin Peter’s death on Ghost Spider, effectively ostracizing her and putting Gwen on the run.

Does Whatever A Spider Can: Comparing SPIDER-MAN and SPIDER-GWEN

Ming-Na Wen will join the cast for the animated film, voicing the main villain Hala. Hala is a Kree Accuser, functioning essentially as a Kree law enforcement officer. Ronan the Accuser appeared in a similar role in GUARDIANS OF THE GALAXY. However, it’s way less likely that Hala will be working for Thanos in the same capacity.

During the SDCC panel, show creators emphasized their desire to place focus on the characters, rather than getting bigger and better explosions every single time. In that way, MARVEL RISING becomes explicit character driven rather than relying on flashy action pieces. The panel aired the first four shorts of the animated series and uploaded a sneak peek of Ms. Marvel and Squirrel working together to apprehend Ghost Spider.

The Importance of Diverse Characters

The entire cast of MARVEL RISING during the panel emphasized how important they felt the show could be to a younger generation of Marvel fans. Milana Vayntrub, who voices Squirrel Girl, said

“When I was growing up, we got to see a lot of action-adventure series and films that starred lots of men. I had no problem putting myself in those characters shoes. Now it’s really exciting because we’ve made this exciting series and soon-to-be film with a nearly all-female cast. I’m really excited for young boys to see themselves in these characters.”

Men have a long history of dominating nearly all aspects of media production. It has only been in recent years that the industry has begun making the shift toward a more diverse and realistic representation of the world we actually live in. Mairghread Scott, who wrote the script for the series and film, told audiences at the SDCC panel, “It was very important to me that this was a girl show.” MARVEL RISING aims to provide new, positive role models for young audiences, a move that will hopefully garner them much success in the future.