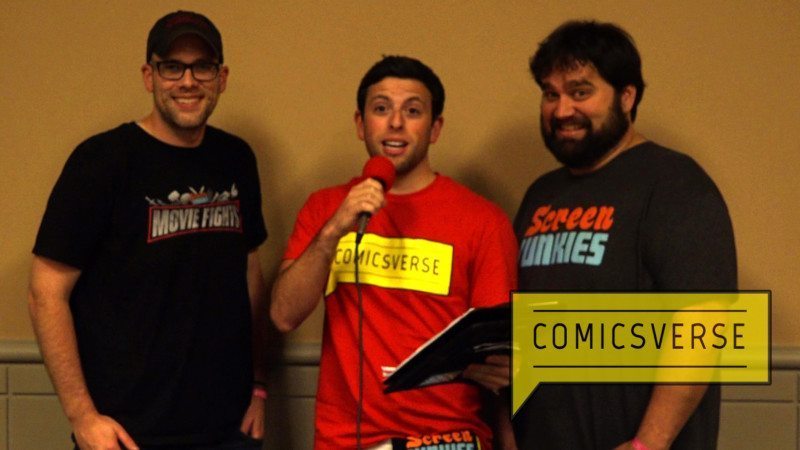 This year, at Wizard World Philadelphia, I had the pleasure of talking with the Screen Junkies. Their popular YouTube channel hosts their weekly Movie Fights, Screen Junkies Show and of course, their biggest hit, Honest Trailers. That being said, what many viewers may not know, is that these extremely talented gentlemen recently launched Screen Junkies Plus. SJ Plus hosts an insane amount of great content that can’t be seen anywhere else. As a member myself, I highly recommend that you should sign up.

1. Jay and Silent Bob host a hilarious show where they unwrap toys and play with them (Whats in the Box?).
2. Interns of F.I.E.L.D. is a very creative and funny spoof of the Superhero Genre.
3. You get a great BTS look at Honest Trailers (Honest Commentary).
4. HISHE and SJ teamed up for a fantastic After Credits series.
5. Jeremy Jahns has a fun movie trivia game show!
6. And so much more brilliant DAILY content.

During my interview with Andy Signore and Dan Murrell, we discussed their original online series, Interns of F.I.E.L.D., which spoofs Agents of S.H.I.E.L.D. and the superhero genre on the whole. This series is insanely funny and it was great to hear Dan talk about how the concept came to be. I also got the chance to ask both Andy and Dan about their future Movie Fights and what celebs they hope to one day feature. Additionally, we dove into the effect that Honest Trailers has had on their movie watching habits. I was happy to hear that they still can enjoy watching films recreationally without putting on their Honest Trailer hats…unless the movie is so bad that they cannot hold back from critiquing it.

Getting to interview the guys was such a great experience, mainly because the Screen Junkies are such nice and genuine people. While the interview only featured Andy and Dan, Spencer Gilbert was also present for the autograph signing and he happily engaged with everyone in line, even though he was at risk of missing his flight. The whole SJ team was so humble and I cannot say enough good things about them. Every fan was given individual attention, and that’s saying a lot considering the line was out the door. If you want amazing daily content, you must check out ScreenJunkies.com and sign up for ScreenJunkies Plus. I promise you, it is worth it.