Scooby-Doo, where are you? In the middle of an apocalypse in SCOOBY APOCALYPSE #22!

That’s right; the beloved characters from Hanna-Barbera have been revamped with an awesome new story by J.M. DeMatteis and Keith Giffen for a modern day audience. After a science experiment gone wrong, the world has been infected by a nanite virus that transforms humans into mutated creatures with enhanced primal instincts. So the Scooby-Doo gang has grown up and must survive in a post-apocalyptic world filled with real monsters.

So, SCOOBY APOCALYPSE #22 begins with the gang split up. Trapped in a war-torn mall, Daphne and Fred come across a monster massacre. Shaggy, Velma, and newcomers, Daisy and Cliffy, debate whether or not they should wait for their friends or rescue them. As Daphne goes off on her own to scout the area, she has this long inner monologue about possessing a sense of purpose in this horrifying world, having plans for the future and dreams for a restored humanity gives her something to live for. Also, she considers Velma’s plan to fortify the abandoned shopping center as their base. Shaggy and Velma infiltrate the mall and reunite with Daphne and Fred while Scooby-Doo is left behind to protect Daisy and Cliffy. The issue concludes with the team deciding to convert the mall into their hideout while a mysterious creature lurks in the sewers. 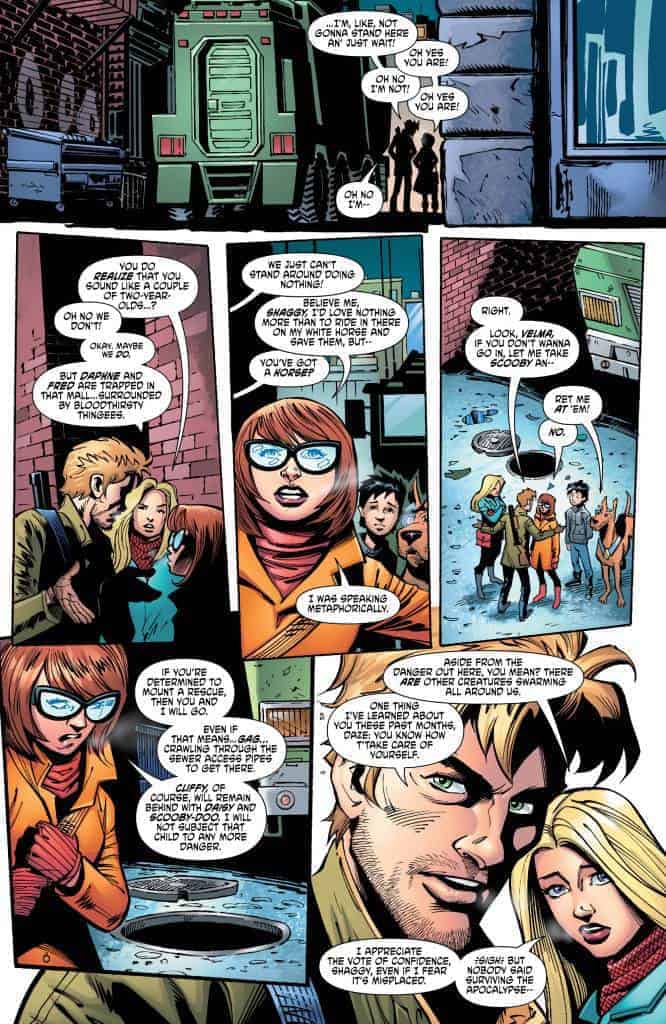 So I did like the fact that this rendition of Scooby Doo involves real monsters. This isn’t Old Man Jenkins in a Halloween mask. These are creatures with fangs and claws and the intent to kill. There’s a real threat of danger now. The meddling kids aren’t kids anymore; they’re adults fighting for their lives. It’s a slightly more mature storyline for a teen audience featuring mild blood and violence. With panels focusing on the gruesome slaughter of monsters in a blood-splattered mall, the artwork by Scott Kolins, Andy Owens, and Ron Wagner does a great job presenting a violent post-apocalyptic world to readers.

Daphne as A Leader

One difference between this series and the Scooby-Doo gang we know and love is that Daphne is now in charge. In the face of danger, she’s tough, determined, and can hold her own in a fight. This is much different from her past incarnations where she was often the damsel in distress. It’s a pleasant contradiction from the original source. However, in this issue, she has moments of being unnecessarily aggressive and too assertive to her friends. She barks orders, even when the others disagree with her. She even punches Velma in the head for the fun of it. So it’s a good thing she has Fred to act as her moral compass and make her more considerate. 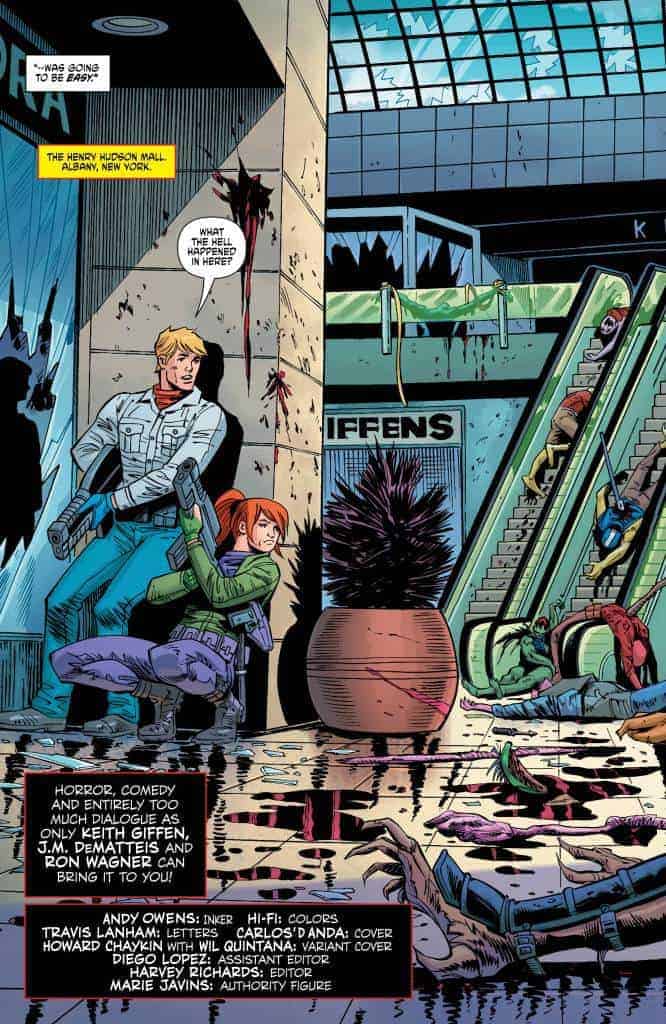 There are two new additions to the team. Daisy Dinkley, Velma’s sister-in-law, joins the group with the hope of finding a cure to the nanite plague her husband is partially responsible for. Previously treated like a pet by Scrappy Doo, Cliffy, a young boy orphaned by the apocalypse, finds safety with the Scooby-Doo gang. There is a sweet moment in this issue where they promise they will protect each other, like a family. To Daisy, the boy is a symbol of hope for the next generation of humans. For the characters, this faith in surviving the end of the world acts as their motivation. The inclusion of both of these new characters change the group’s dynamic and will factor into life-and-death decisions that affect all of them.

SCOOBY-DOO! WHERE ARE YOU? #89 Review: Classic Comfort Food

If you’re expecting to read the classic teenage mystery-solving hijinks for the nostalgia factor, then this might not be the comic for you. SCOOBY APOCALYPSE #22 is a far stretch from the original cartoons we all grew up on. Asides from the occasional “Ruh-Roh” and “Jinkies,” there’s not much tying this comic to the original series. That’s not necessarily a bad thing. So if you’re curious about seeing the Scooby-Doo gang in a completely new light, facing real monsters in a post-apocalyptic world, you should check it out.