Zoinks! DC Comics has unleashed a new comic book adaptation of Scooby-Doo and the Mystery, Inc. gang. The writers behind SCOOBY-DOO APOCALYPSE are J.M. DeMatteis and Keith Griffen as they put these classic Hanna-Barbera characters in an apocalyptic setting in the distant future. While it is interesting to see the Scooby-Doo gang with new backstories in an apocalyptic world, the structure of the comic brings down its quality.

READ: Speaking of apocalypse, check out our review of X-MEN: APOCALYPSE!

The comic opens with Dr. Velma Dinkley complaining about the ignorance of the masses, but despite this fact, Velma resolves to do her part to try and save humanity before it’s too late. Then we are introduced to a failing media journalist Daphne Blake and her cameraman, Fred Jones, who are at a festival to meet with Velma. Daphne hopes that Velma’s information will provide her with the scoop she needs to put her show, “Daphne Blake’s Mysterious Mysteries,” back on top. Nearby, dog trainer Norville ‘Shaggy’ Rogers and his dog Scooby leave the science base where he works to get some food. It’s not long before fate and coincidence brings these individuals together.  The comic starts to drag when Velma starts explaining the scientists’ plan to save the world, however. Unlike the previous Hanna-Barbera comic, FUTURE QUEST, this comic introduced the characters before giving us the comic’s backstory and plot. FUTURE QUEST was a far more engaging read because it managed to do both simultaneously. The planet was slowly dying, so these scientists believed that controlling the masses would help save the world by having them all work in unity. They would accomplish this by releasing nanites, microscopic machines which could alter the genetic makeup of anyone they touched. Once Velma finishes her explanation, the doors of the safe zone close and the nanites are released! 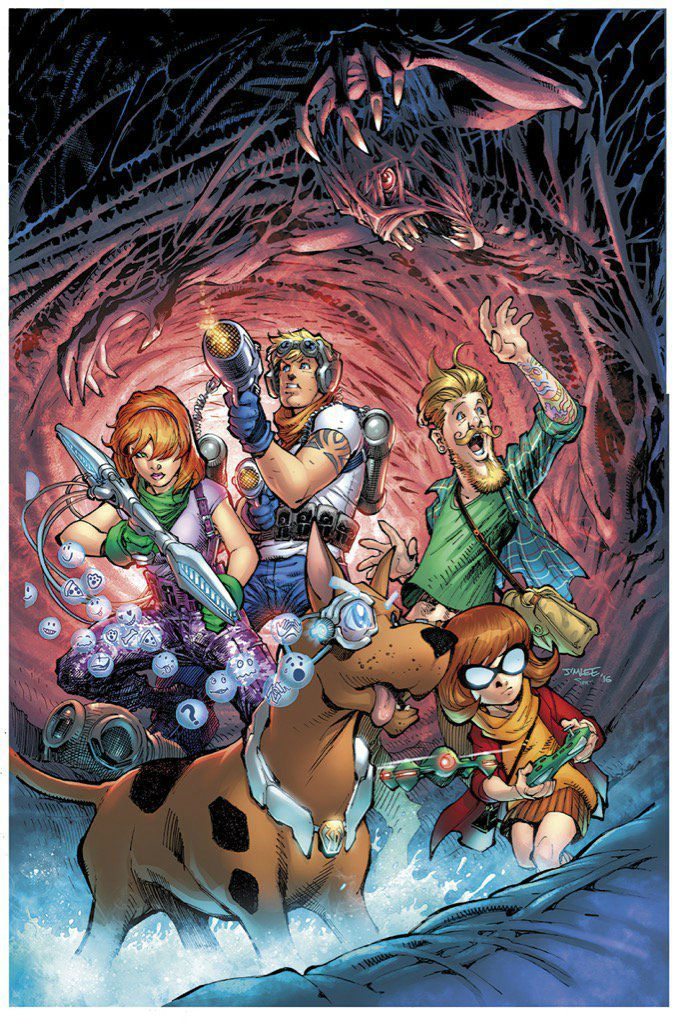 As mentioned previously, I find the idea for this comic to be very creative. Each of the characters’ backstories essentially makes their personalities exactly as they were in their previous incarnations, but in a new and inventive way. I appreciate that DeMatteis and Giffen didn’t completely throw away the usual personalities of these characters, making them seem to be knowledgeable about the distinctive characteristics of each member of the Mystery gang. They make Fred the level headed voice of reason, Daphne the overly sensitive emotional one, Velma the genius, Shaggy the slacker with a heart of gold, and Scooby the lovable talking dog. Now with all these positives, why does the comic fall short when compared to other modern adaptations of SCOOBY-DOO? The answer is the lack of a compelling mystery.

READ: Check out our review of the other comic based on Hanna-Barbera characters FUTURE QUEST #1

SCOOBY-DOO has always revolved around four friends and their talking dog solving mysteries. No matter what adaptation you look at, that has always remained the same. I understand that in this comic they are just meeting for the first time, which makes the lack of a central mystery a bit more excusable. However, this isn’t the first adaptation where we have the core characters meeting for the first time. In those adaptations, the characters have always had to solve some sort of mystery, or a string of mysteries. This first comic seems to be setting up these characters as superheroes rather than detectives. I could be wrong since this is the first issue, and there could be some mystery that the group will have to solve together in the future. For right now, the only mystery is what Velma is keeping secret from the rest of the group, which is painfully obvious to anyone who has ever read a mystery before. Although, based on Velma’s character, it makes sense why she would keep secrets from the rest of the gang. At this point in the story, they are strangers who are in the same predicament. I’m sure as the comic goes on and as Velma grows closer to the rest of the gang, she will reveal her secrets and hope that their newfound friendship will allow the others to look past it.

As for the art, Howard Porter’s work here is exceptional. It has a blue undertone along with some darker shades of color, which add to the otherworldly feel of the comic. These backgrounds make it feel like story is taking place on a distant planet, rather than Paris. The character designs are interesting to say the least. The comic seems to try extremely hard to make the Scooby-Doo gang look cool and modernized while still staying true to its roots. For example, the addition of Scooby wearing a device which releases emoticon bubbles allows for him to communicate better with the rest of the gang, since he is very limited in his speech. The character who stands out the most to me is Shaggy who looks like a hipster from Portland who shops at Whole Foods. He has a hipster mustache and beard, along with a sleeve tattoo which disappears and reappears several times throughout the issue. He isn’t the only one whose appearance is inconsistent; the size of Fred’s jawline seems to change depending on what angle the panel has him in. These nitpicks were noticeable enough that it took me out of the story. 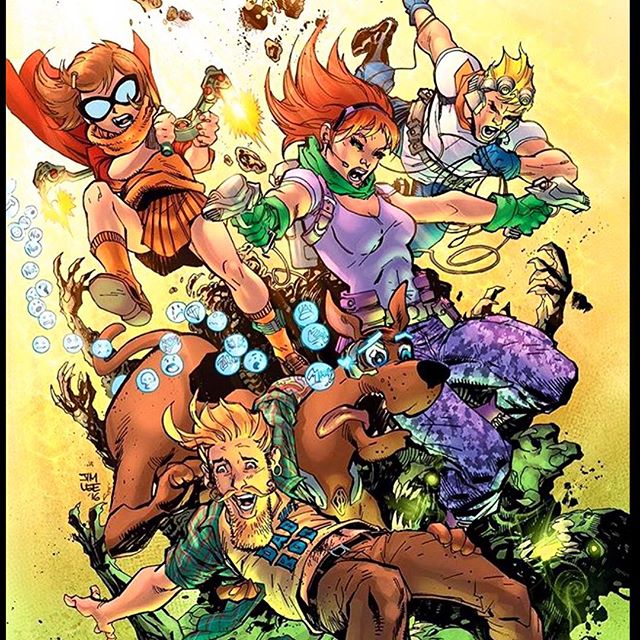 In the end, the comic certainly has a fascinating storyline with some great scenery. J.M. DeMatteis and Keith Giffen are definitely talented writers, and their story combined with Howard Porter’s artwork makes this comic worth checking out. However, if you read this comic expecting the Scooby-Doo gang to solve some sort of mystery, then you will be sorely disappointed.