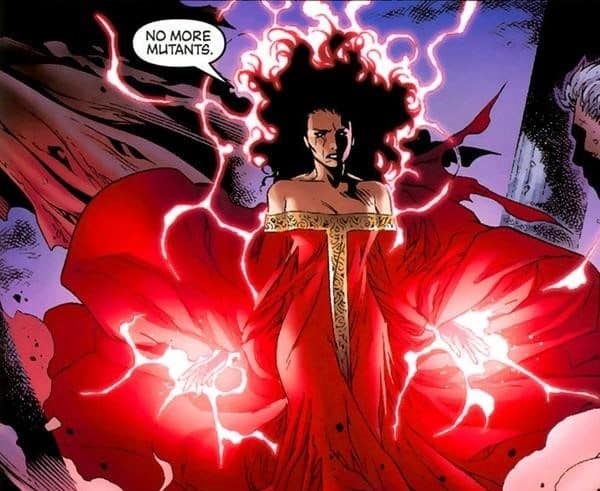 In “Avengers Disassembled”, the Scarlet Witch was Brian Bendis’ mechanism for nearly destroying the Avengers.  At the end of “House of M”, she was responsible for the decimation of the mutant race.  And yet, Marvel have just announced that their All-New, All-Different range will feature a new SCARLET WITCH series – penned by James Robinson!

But is she ready for a solo series?

The argument for a Scarlet Witch solo series

The Scarlet Witch is one of Marvel’s most iconic characters, a powerful sorceress with a history of mental illness.  She’s the kind of protagonist who can work on a number of levels and, right now, the House of Ideas seem to be flourishing at creating powerful female leads.  Her origin’s being rewritten over in Rick Remender’s UNCANNY AVENERS, and she’s gotten a massive popularity boost through AVENGERS: AGE OF ULTRON.

Marvel have put in solid effort to redeeming the character, with her playing a key role in repowering of the mutant race in “Avengers Versus X-Men”.

The argument against a Scarlet Witch solo series

For years, the Scarlet Witch has been more of a plot device than a character.  Brian Bendis used and abused the character in his pursuit of redefining the Avengers, and her power levels were upped dramatically.  Even UNCANNY AVENGERS has followed this trend, with the Scarlet Witch used as a plot device for Kang’s masterplans and for the events of ‘Axis‘.  With near-infinite power, her potential as a solo lead isn’t good – she’s just overpowered.

What’s more, many fans still haven’t forgiven her for the destruction of elements of Marvel continuity that they knew and loved, particularly X-Men fans.  There’s every possibility that many fans will purposefully avoid this series.