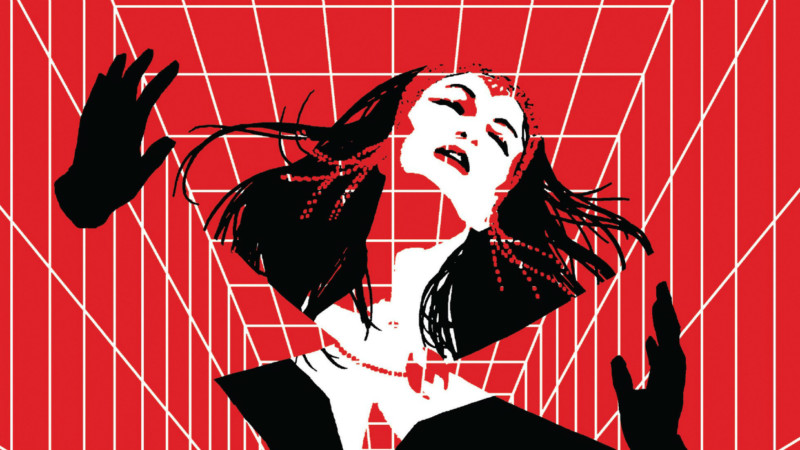 SCARLET WITCH: THE FINAL HEX may, on its surface, seem like a book about witches and warlocks using spells and hexes to defeat evil. Don’t worry; the book absolutely contains these elements in spades. However, what it’s really about is motherhood. It’s about a mother meeting her long lost daughter. It’s about a mother reuniting with her adopted daughter. Above all else, it’s about the bond between a mother and a daughter, no matter who the mother is.

In the previous two volumes of SCARLET WITCH, the titular character, Wanda Maximoff, discovered that witchcraft itself was broken. Spells weren’t working properly, and witches and warlocks died as a result. This led her to the Witches’ Road, a dimension where witches and witchcraft reside. Along the road, Wanda saw a woman who looked alarmingly like her. She soon learned that this woman was her biological mother, Natalya Maximoff, who also held the title of Scarlet Witch.

READ: Want to learn more about this series? Here’s a preview of the first issue of SCARLET WITCH!

FINAL HEX begins with Wanda traveling to a town in Serbia where Natalya was last seen alive. She visits a priest and soon reveals that she knows he was there when the High Evolutionary and the Knights of Wundagore ransacked the town in search of powerful children that the High Evolutionary could experiment on. The priest sold out Natalya, a known witch, and her children, Wanda and Pietro. This, in turn, led to Natalya’s death at the hands of the High Evolutionary when she went to get her children back. This priest started Wanda down a path that led Wanda to lose her mind, attack her Avengers teammates, and nearly wipe out all mutants on Earth in AVENGERS DISASSEMBLED and HOUSE OF M. Wanda would have had a different life if it wasn’t for the priest.

Writer James Robinson skillfully shows Wanda slowly lose her temper with the man who changed her life. She goes from calmly and politely inquiring about her mother’s band of travelers to coldly stating that she knows he played a part in her mother’s demise. The anger boils to the point where Wanda destroys the church with her chaos magic in a fit of rage. Artist Leila Del Duca and colorist Felipe Sobriero also beautifully capture the emotion of this meeting. The priest first appears as a dark shadow in a dark room devoid of all color except for Scarlet Witch’s costume. Del Duca initially draws the priest at the same height as Wanda, making them look like equals until Wanda reveals his true nature. He cowers as Wanda towers over him and asserts her dominance over this spineless fool.

READ: Seen AVENGERS: AGE OF ULTRON? Here’s an article about the MCU’s portrayal of Scarlet Witch.

The story continues with Wanda meeting her mother’s former sidekick, Dasha. She fought monsters with Natalya during a time she calls the “Age of Horrors.” Robinson brilliantly incorporates Marvel continuity into the book by making Natalya a hero during the 1950s, when Marvel was publishing almost exclusively monster books.  Not only are Wanda and Natalya Scarlet Witches, but they also both used their powers for good, to fight off ne’er-do-wells who threatened mankind. They’re both benevolent people, undeserving of the stigma of being called a “witch.” Dasha brings Wanda to a woman she never thought she’d see again: her aunt, Marya. Marya and her husband, Django, raised Wanda and Pietro until an angry mob burned down their wagon. Wanda long believed that Marya died. She actually survived. Unfortunately, the fire scarred her. She did not want Wanda to see her like that because her burned visage ashamed her.

The artist for this issue, Annapaola Martello, perfectly captures the look of a burn victim with Marya. She has noticeable scars, but she does not look horrific like Deadpool or Freddy Krueger. As a victim of both horrible trauma and intense prejudice, Marya’s self-image is lower than it deserves to be. The burns led Marya to believe that she was a monster. Robinson shows how Wanda sees her with a bit of dialogue. Marya says that she can’t imagine how she looks to Wanda. Wanda merely responds “You look… like the woman who raised me from a baby as if I was her daughter.” Much like Yondu and Peter Quill’s relationship in GUARDIANS OF THE GALAXY VOL . 2, Marya realizes that she was Wanda’s mother just as much as Natalya was. After this heart-to-heart, Marya suddenly changes form into a creature.

READ: Do you think the SCARLET WITCH ongoing series is a good idea? Take this poll!

A witch-demon followed Wanda and took over Marya’s body. After a short battle with the witch-demon, the ghost of Agatha Harkness, another maternal figure for Wanda, shows up and helps Wanda defeat the creature. This woman taught Wanda nearly everything she knows about magic. She spent more time with Wanda than Natalya or Marya. She is just as much Wanda’s mother as they are. Her appearance gives Wanda the courage and the power to defeat the monster that wears her aunt’s face.

In the monster’s wake, Natalya finally greets Wanda. Her ghost briefly takes possession of Marya’s body and reunites with Wanda. After telling Wanda to meet her on the Witches’ Road again for a final battle, Natalya finally thanks Marya for being Wanda’s surrogate mother with a gift. Marya’s burns magically disappear. She can finally look at herself the same way Wanda sees her.

On the Witches’ Road, Wanda meets her mother’s spirit again. She explains to Wanda that Chaos, who usually shares power with Witchcraft in order to make hexes and spells work effectively, became greedy and wanted the power all to itself. So it overpowered and bound the Goddess of All Witches, the physical embodiment of Witchcraft. The Goddess works as yet another motherly figure for Wanda. She is essentially the mother of Witchcraft and, as her name implies, witches themselves.

Wanda knows what she must do: defeat Chaos and, this time, save her mother. Wanda sees this as a way to redeem herself. She could not save Natalya from the High Evolutionary since she was still a baby. She thought Marya died, so she could not save her from the angry mob, but she can at least try to save the Goddess. If she saves the goddess, then perhaps she can make up for what she thinks are two failures.

With the help of her mother and Agatha, Wanda weakens Chaos. Natalya calls in Wanda’s brother, Quicksilver, to deal the finishing blow. Without Wanda or Natalya even saying a word, Pietro knows that Natalya is his true mother. Unfortunately, the Goddess was severely weakened by the attack and is in need of a new soul to recharge her. Natalya sacrifices herself to save Witchcraft.

Wanda loses her mother yet again, or so she thinks. Since her mother’s soul now embodies the Goddess, she will always be there with Wanda. While the popular “parent sacrificing themselves for their child” trope shows up a lot in literature and film, Robinson adds a unique touch to the tale: Natalya sacrifices herself so she can become yet another motherly figure for her daughter. The story ends with a cliffhanger since Natalya never revealed the identity of Wanda’s biological father. Before she died, Natalya told her daughter that Wanda’s father killed her, not the High Evolutionary. Perhaps Wanda will have a reunion again with her mother, in her new role as the Goddess of All Witches. For now, she still has Agatha and Marya.

One of the biggest draws for the SCARLET WITCH book is each issue having a different artist. Jonathan Marks-Barravecchia draws an issue that takes place solely on the Witches’ Road. Much like Jack Kirby’s interpretation of the Negative Zone in early issues of FANTASTIC FOUR, Marks-Barravecchia gorgeously uses a combination of hand-drawn art and photo collage to create the bizarre, otherworldly setting of the Witches’ Road. Shawn Crystal draws the climactic battle between the witches and Chaos. He captures Wanda’s heartbreak in her facial expressions as she sees her mother sacrifice herself. Vanessa Del Rey brings the book to a close with a single issue featuring Wanda exorcising a monster from a young boy. She draws the creature, a hawk-human hybrid, with impeccable detail, creating the horrific sight of a giant, winged creature clutching the shoulders of a small, scared child.

FINAL HEX brought Robinson’s tenure on Scarlet Witch to a close in a heart-warming and gut-wrenching way. He told an immensely relatable tale about a child being reunited with a lost parent, and a parent-figure learning that they’re not a disappointment. This series will be remembered as one of Wanda’s best stories, because of these themes of motherhood and reunions as well as the amazing art within its pages.