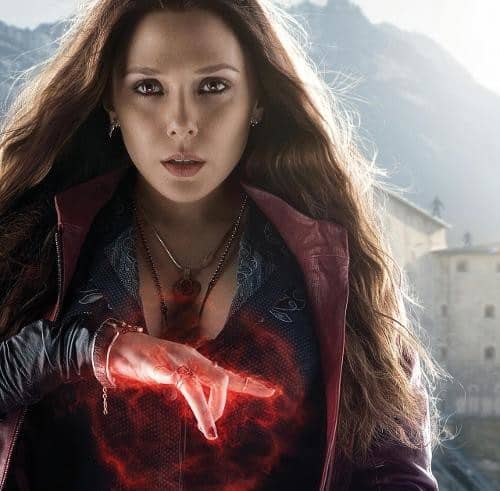 Up till now we’ve only had vague images, but now it’s finally out – the Scarlet Witch poster for Avengers: Age of Ultron!  So this seems like a good time to cast my eye on a few of her old looks, both in comics and other media, and see just what’s inspired Joss Whedon’s design…

Just a heads-up: this is by no means a definitive assessment of every look the Scarlet Witch has ever worn.  It’s just a look at some of the major ones, and some that I feel may have impacted the design! 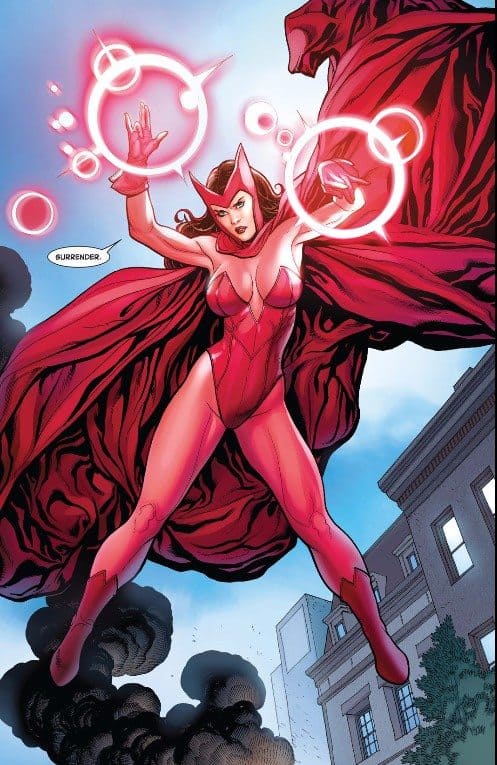 This is the classic Scarlet Witch costume, one she shifted into shortly after joining the Avengers; it’s cropped up time and again.  Unlike many super-hero designs, the pink bodysuit and the compartmentalisation – visible seams, for example – actually make it look halfway to real.  As with many of the Scarlet Witch’s designs, everything about it either emphasises her curves – or contrasts with them, using triangles (right down to the boots).  In the hands of the right artist, the colourscheme is really effective – the hair can actually seem to billow out into her cape, a rather cool effect. 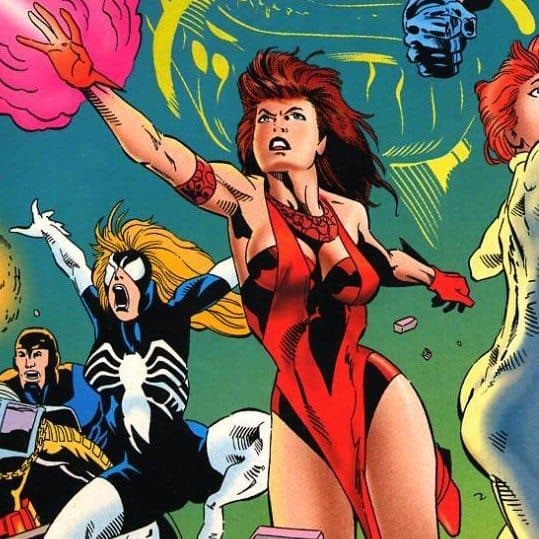 Fans of the 1990s Marvel Action Hour series will recognise this costume – she wore it as a member of Iron Man’s back-up cast.  In actual fact, the Scarlet Witch donned this look as a member of Force Works, Iron Man’s personal team of Avengers.

There are a few touches that makes it seem almost a homage to Xena: Warrior Princess, and there’s an interesting contrast between curves and sharp angles.  Her hair is usually drawn as much wilder, very out-of-control, but the main criticism is the front drape – it’s just impractical.

If you browse this look on the Internet, you most definitely get the impression Rob Liefeld penned it a lot.  The drapes are increasingly impractical and out-of-control, but the greyish-black of this art – along with the sort of ‘dusty’ red – works much better than black and sharp-red as sometimes coloured.  It features one of the few tops that’s actually practical, and not just a corset that’s somehow magically defying gravity.

The costume was redesigned for the game X-Men Legends II. 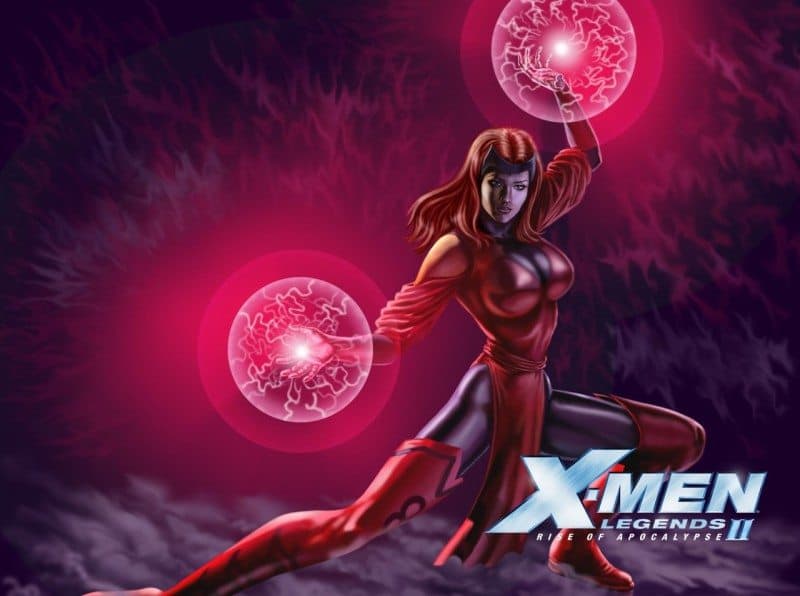 In this redesign, the look is almost Oriental, and the sleeves actually work.  The V-neck is a much better look, and the drape problem is resolved by changing the material into something a lot more solid.  The headpiece is a nice homage to the traditional design, but doesn’t really work too well.  Essentially, the game took a costume that was nothing too special, and turned it into something rather cool. 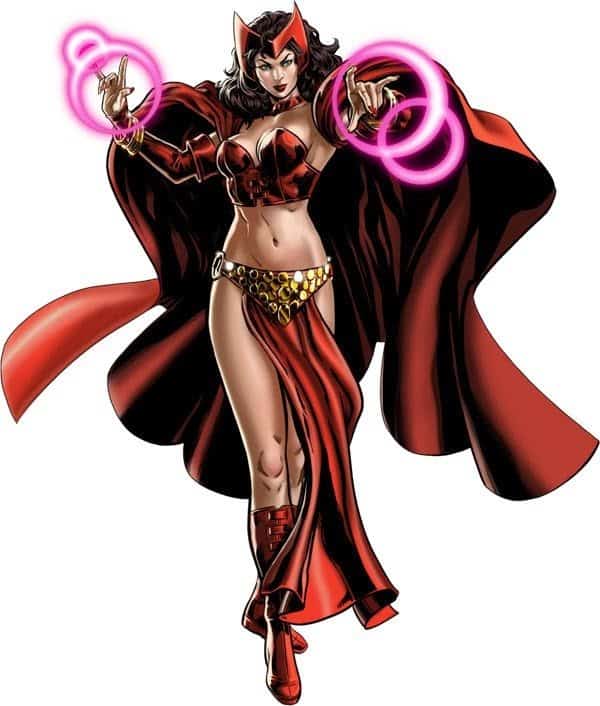 One of the Scarlet Witch’s more surprising looks is the Gypsy one, which plays to her Gypsy heritage with a feel of flowing movement.  There’s a beautiful satin feel to this costume, with the first hints of a regal character – through the long, flowing cape. 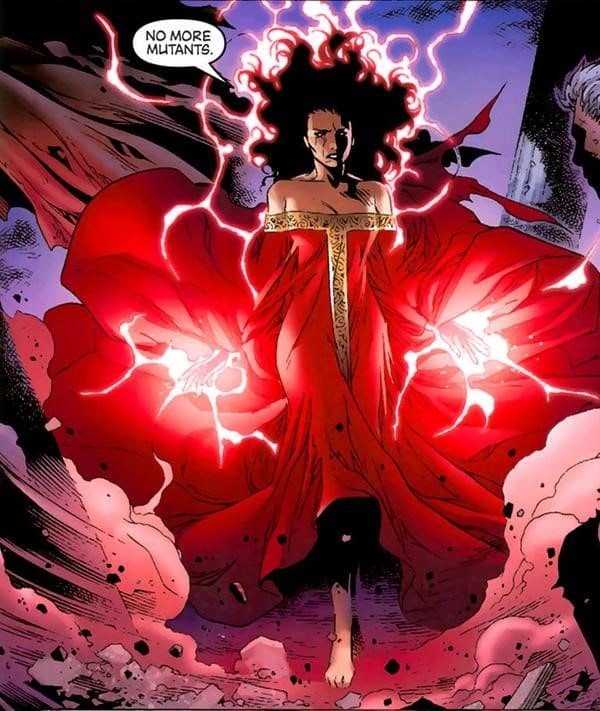 Two words spring to mind: Your Majesty.  In the House of M, the Scarlet Witch was regal and powerful, heir to a powerful dynasty – as emphasised by the deep reds and the gold bands.  The utterly impractical flowing outfit is absolutely gorgeous, billowing out like a thundercloud, and the out-of-control hair emphasises the sheer insanity of the character. 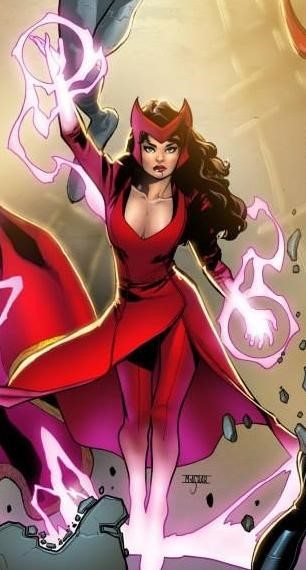 Meet the Scarlet Witch of the Uncanny Avengers.  The heavier cloaks have been abandoned, moving to a wrap-around dress rather than the cloaks.  The cleavage is sexy, but not over-the-top.  The traditional headgirl is really a bit big for this design, though.  That said, with the relaunch, the Scarlet Witch has donned another look: 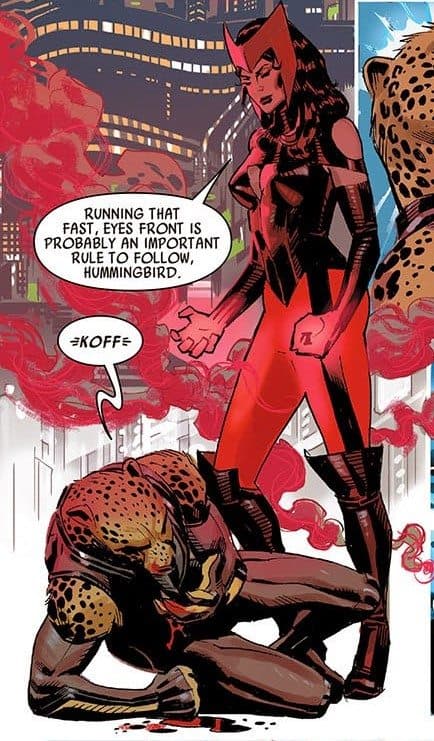 This one’s more traditional, but carries a lot of leather-and-metal styling to it.  That said, at times it feels just a tad overdone, with too many cuts – such as the shoulders.  As with many designs, the headpiece actually doesn’t complement it too well. 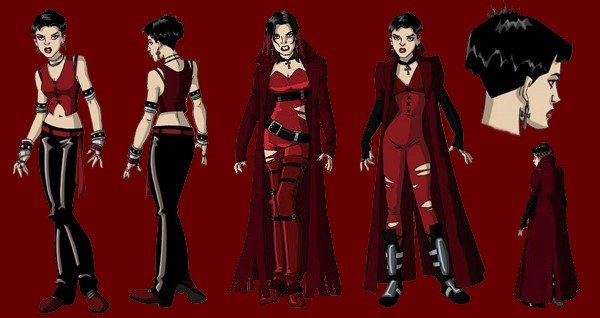 X-Men: Evolution dramatically redesigned the Scarlet Witch, turning her punk!  In a homage to a brief stint with the Brotherhood, her hair is shorter and emphasises her rebellious nature.  The cape has been replaced with a trenchcoat, and the look feels almost military at times.  There’s still a fair amount of cleavage, but – due to the character’s age – it’s not emphasised as much thankfully. 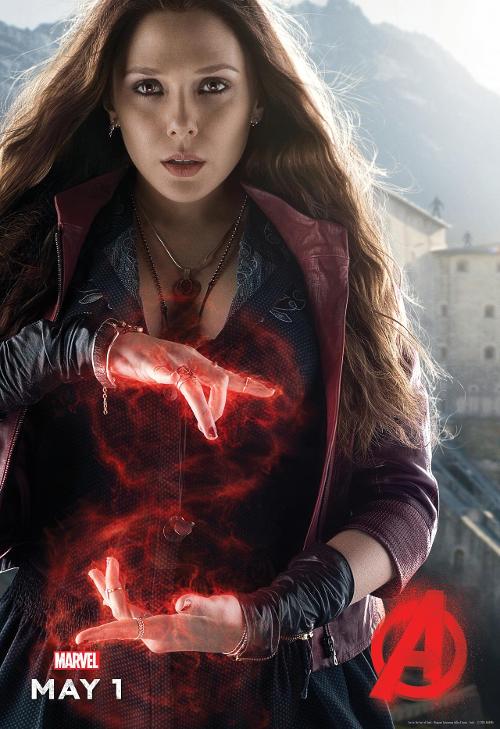 Your first glance tells you that this costume carries a real sense of homage to X-Men: Evolution – albeit with a biker jacket replacing the trenchcoat.  There are strong visual cues to the Gypsy heritage – rings, bracelets, necklaces – but other than that it really does feel like an everyday look.  Whedon has clearly chosen to avoid the traditional feel of the character (not a trace of a pink bodysuit or an OTT headpiece).  And yes, there’s cleavage, but the necklaces prevent that becoming a visual focus.  But gone also is any sense of the regal and majestic; this woman is clearly a rebel.

I can’t wait to see how this works on the big-screen!