From Jonathan Swift’s A MODEST PROPOSAL to THE COLBERT REPORT, satire is one of the greatest tools available to show how ludicrous society can get and the forms of satire have continued to change. Author Mark Twain satirized capitalism’s machiavellian operations in A CONNECTICUT YANKEE IN KING ARTHUR’S COURT, while modern satire exists even on YouTube with groups like Mega64 who satirize how hyperbolic youtube pranks are. One industry that has shown it needs a reality check from its
3 p.m. booze parties and meditation breaks via satire is Silicon Valley.

The continuation of self-obsession and lack of recollection of the last dot-com bubble is ripe to be deflated. Despite the stated good intentions and claim that the Bay Area is the epicenter of change in the world, Silicon Valley rarely recognizes and calls out its own sins.

READ: Want to see more examples of how the world is changing? Check out “Independence in Modern Pop Culture”

Facebook, Silicon Valley’s golden child, has been shown to conduct social experiments on its users by manipulating feeds while Uber treats drivers as contractors, and thus puts the brunt of insurance, medical care, and car damages on the driver. Uber and Lyft recently pulled out of Austin, TX at the mere hint of regulation. Beyond the hesitance to pay taxes (thus contributing to the infrastructure of the Bay Area) every startup in Silicon Valley avoids admitting that their true goal, just like Facebook, is to inflate their IPO and cash out. It’s this self-obsession and lack of awareness that make Silicon Valley an easy target for satire. Mike Judge, the creator of IDIOCRACY and BEAVIS AND BUTTHEAD, has also created SILICON VALLEY, a series that uses satire to show how ridiculous and unperceptive the tech industry actually is.

Throughout this journey, Mike Judge, and the comedians that flesh out the main cast, call out a variety of idiosyncrasies the tech industry seemingly isn’t aware it possesses. For example, brogrammers, who despite holding a vocation that 10 years ago was considered nerdy and earnest, carry an air of hollow bravado and immorality. No one in the Bay Area is safe from SILICON VALLEY’s satire. Some of the succinct arrows pulled by the show are aimed towards the ridiculous advertisements and philosophies the tech industry preaches such as encouraging a perspective that a cell phone serves as the connection between ennui and spiritual nirvana. The underlying thread between all these targets is the inherent lack of perception that is found plaguing Silicon Valley.

READ: Want to see satire employed in comics? Check out our review of PEREZ Vol 1

Other targets of SILICON VALLEY’s satire are property owners within Silicon Valley who have increased the value of their property by refusing to allow affordable housing to be built within the Bay Area.If you were to take aside anyone walking in the streets of the Bay Area and mention how ridiculous housing prices are that person would have a mouthful to speak about it. It was just within the last year that San Francisco ranked as the most expensive city in which to rent a one bedroom apartment. A major contributor to this issue is the group of property owners who are grandfathered into homeowner associations by their purchases in the late 70’s. This group’s sole drive is to maintain the fact that the house they purchased in the late 70’s is now worth several times more than what they initially bought it for. This goal comes to fruition by voting down any reasonable legislation that would allow the youth that truly drives property values to have a reasonable chance to live near their place of employment.

It was only within the past year Santa Clara County, home of Apple HQ, voted to shut down any plans to open reasonable housing near public transit. The measure was largely shot down by elderly property owners, otherwise known as NIMBYs (Not In My Backyard). SILICON VALLEY acknowledges and calls out the cognitive dissonance and entitlement NIMBYs display in profiting off growing property values, yet stifling the entrance of young, penniless, yet brilliant programmers who are raising the value of the property in the episode entitled “Server Space.”

READ: Check out what we think makes sitcoms work!

Noah, a neighbor of the Pied Piper group, is intruding into their plans to build a server space within their garage. Noah continuously threatens to report the Pied Piper group for running their business out of a residential area that he wants to be more suited for families. However, Noah’s hypocrisy comes out when Richard and Erlich confront Noah about the ferrets he raises in his backyard, which is illegal. It’s with this revelation of Noah that SILICON VALLEY uses satire to reveal that ultimately underneath the claims of protecting the community for the family values that often get voiced in HOA meetings throughout the Bay Area, the only goal of the speaker of the complaint is to protect the value of their skyrocketing property. 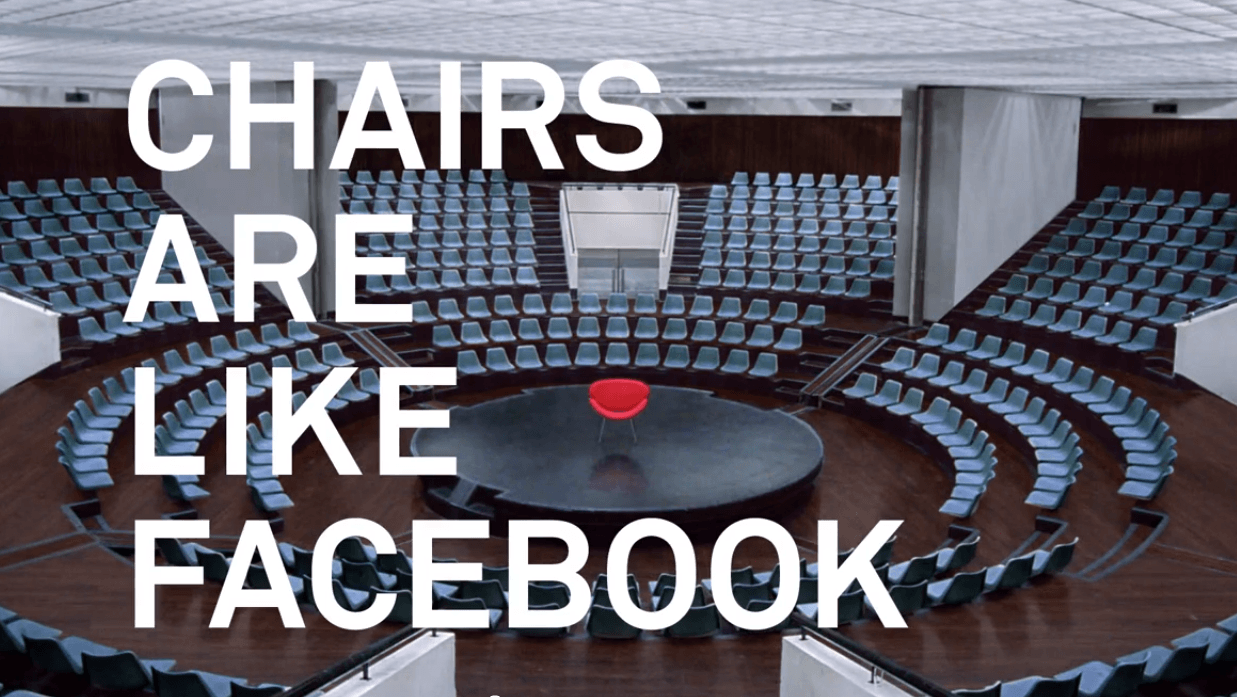 The ads that come out of the tech industry are interesting, to say the least. Even the reigning king of the tech industry, Apple, has laughable ads that aim to romanticize a smartphone to the heights that it is a vital utility in order to blossom and elevate your life. SILICON VALLEY satirizes how ridiculous and bombastic Silicon Valley ads are in the episode “Daily Active Users.”

Parodying ads like Facebook’s “Chairs” or Uber’s “Bits and Atoms” ad, Pied Piper creates an ad called “Tables”. Alongside ads by Apple, Facebook, or Uber, “Tables” bears numerous similarities; in fact the only major difference is that Pied Piper is a fake company. All four ads overstated the company’s purpose, making it seem like the products are interwoven into the DNA of everyday life, like a chair or atoms. In fact, nowhere in the Facebook ad does it say what Facebook actually is. Just like Facebook, nowhere in the “Tables” ad in SILICON VALLEY does the ad explain what Pied Piper actually is. It is with the “Tables” ad SILICON VALLEY makes fun of how self-aggrandizing and bombastic companies in the tech industry are. Furthermore, with these ads, SILICON VALLEY also makes fun of how hollow the rhetoric is that comes out of tech companies. This can succinctly be seen in Hooli (a fictional Apple/Microsoft-esque tech company), created by CEO Gavin Belson.

In this fake website Hooli’s slogans and motto are plastered loudly and brightly. Slogans such as: “Making the World a Better Place” or “Our offerings don’t stop at our visionary diversity, societal contributions or unwavering commitment to social justice” would lead one to believe Hooli is a gregarious company, and that all its motions are altruistic. However, within the actual show, we see how machiavellian and ruthless the CEO of Hooli is, to the point where Gavin’s actions directly oppose what his company’s claims is its purpose. When confronted with protesters for censoring how news appears in Hooli’s news platform, Gavin puts on a smile and quickly runs through the protestors. In his office, Gavin mourns how in the past, industry titans like the Vanderbilts could have had protestors killed. Gavin then begins fishing his lawyers for approval to kill the protestors. The reasons for the protests and Gavin’s desire to silence them directly opposes Hooli’s supposed commitment to social justice.

READ: Check out why we don’t think Facebook isn’t changing much.

This duality between what the company preaches, and how the CEO acts can be seen in Mark Zuckerberg, CEO of Facebook. When asked about Facebook privacy changes in 2010, Zuckerberg claimed that public is the new social norm, and regarding privacy stated: “Social norm is just something that has evolved over time.” However, a recent picture has come out that shows that Zuckerberg chooses not to abide by the social norms he parrots and forces on millions of users by covering up his laptop’s camera and microphone. Additionally, during the early days of Facebook, Zuckerberg called early users “Dumb Fucks” for trusting Facebook. This discrepancy in what the CEO of Hooli parrots, and what the CEO actually desires and believes in is brought forthright in Gavin Belson and shown to be a reality in the peaks behind the curtain of Mark Zuckerberg.

SILICON VALLEY succinctly displays this dissonance in the final episode of season three called “The Uptick.” When an elephant Gavin brings in to display a simple one line metaphor dies at Hooli, Gavin is ruthless in finding a way to get it off the premises, telling his underlings to cut it up, showing no empathy for the death of an endangered species. Patrice, who is featured throughout the series, appears to be very concerned about the elephant. Patrice presents to Gavin one of the Hooli platitudes he spouts, “In order to achieve greatness, we must first achieve goodness” as an attempt to elicit some emotion from Gavin so he’ll stop using endangered animals to prove an asinine metaphor. Patrice even goes as far as to sing the praises of a Hooli product. In response, Gavin fires Patrice. A longtime employee of Gavin’s, Patrice was featured heavily as a sycophant of Gavin, even going as far to take the platitudes Hooli advertised to heart. When she acts on the principles she was told by her superior were key to the success of the company and challenges her CEO on a small trivial item, she is quickly let go of and shoved through the revolving door with no respect. This scene between Gavin and Patrice goes to show that most of the philosophies, advertisements, and stated purpose are in the end vapid noise. 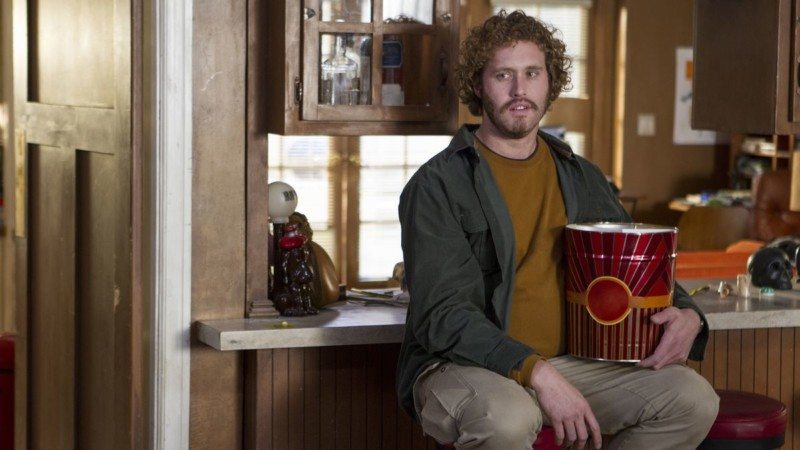 After hosting the Crunchies, a tech award show, TJ Miller was criticized for his behavior. When TJ asked about the real Silicon Valley he stated:

“This is the reason we’re making fun of you: because you don’t get it. You don’t have a sense of humor about yourselves…At the Crunchies everyone was like, ‘That’s Travis Kalanick’s girlfriend.’ I was like, ‘Who is that?’ And they were like, “What!? The guy from Uber!…But Uber is a horrible company. They’re horrible to their drivers. And because it’s a new frontier, they can play by their own rules. They just squeeze the drivers for everything. They’re just increasing the IPO so Travis Kalanick can jack off to it at night, I guess?”

Here TJ succinctly sums up the lack of perception Silicon Valley has about itself. It believes the hollow rhetoric it broadcasts, that they are an iPhone app away from making the world a better place when in reality just as ruthless, machiavellian, and manipulative as Wall Street. This belief in its own high rhetoric leads to a lack of perception and self-aggrandizement. This similar lack of perception, which leads to inflating one’s self-worth and blinded to their negative impact on the world, can also be seen in Wall Street, politicians, and celebrities. By using satire to show how ridiculous everyday motions in the tech industry are, SILICON VALLEY acts as the first sword, cutting through the hollow rhetoric, to reveal what silicon valley truly is, another industry focused on making as much profit as possible, no matter the costs, positive or negative.