Although the first issue leaves the reader with more questions than answers, one thing can be said for certain about SAVAGE: its creators are well aware that everyone loves dinosaurs. SAVAGE #1 gives us what we want right out of the gate by opening with a young man battling a dinosaur so he can steal its eggs. Text informs us that this battle is taking place “now,” and the rest of SAVAGE #1 is taking place in the past. By jumping forward in the plot, the creators immerse the reader in the world of SAVAGE immediately. This technique works because Clayton Henry and Lewis LaRosa’s art is gripping and incredibly effective at telling the story all on its own.  Additionally, by introducing the dinosaurs in the beginning of SAVAGE #1, the creators avoid the cliche of a surprise ending.

In the first issue of SAVAGE, a celebrity soccer player, his wife, and their infant son are stranded on an island after their private jet crashes. Although SAVAGE #1 does not deliver a whole lot of information about the plot, what it does deliver is a ton of potential. And dinosaurs.

In SAVAGE’s opening scene, we see the artists’ work at its best. The title character is anatomically convincing, especially when he is in action. The dinosaurs throughout SAVAGE#1 are impressive as well. Although we cannot judge them with the same anatomical scrutiny as we can the humans, it’s obvious that the artists did their research as to what these dinosaurs should look like. The effect of this realism is that the dinosaurs make convincing predators, as opposed to looking goofy. The artists also demonstrate a strong understanding of how much detail is desirable in each panel. In panels containing an action sequence, the background is minimalistic, containing blurs of colors that suggest foliage. Conversely, the artists fully render backgrounds in panels where the characters are static. Henry and LaRosa choose to focus on small details in certain panels. Not only does this create contrast with the lack of details in the action panels, but it indicates to the reader what visual information that they need to pick up on to fully understand the story. 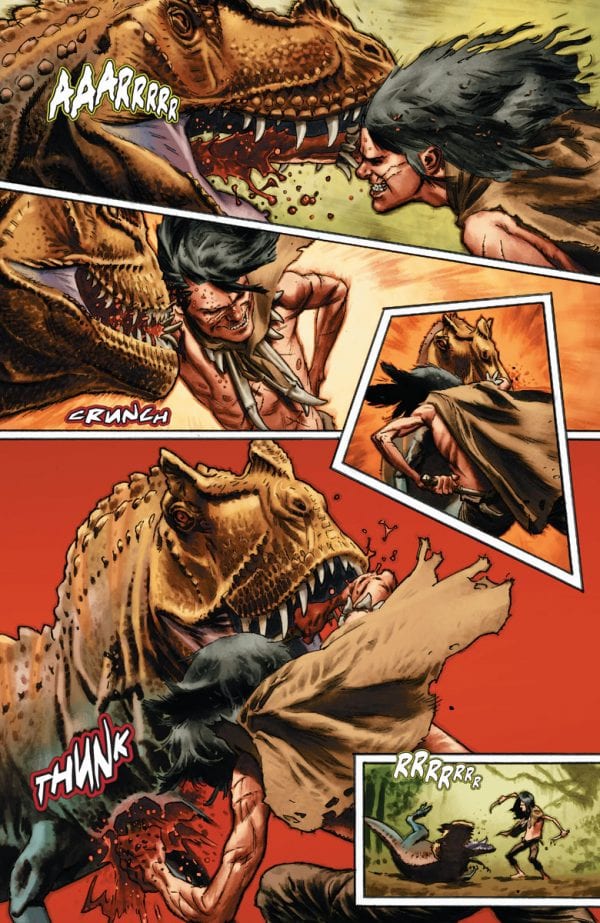 The opening pages of SAVAGE contain almost no text at all. B. Clay Moore is relying primarily on the talent of his artists to set the tone for this series. He also relies on the artists to create a stark contrast between the opening dinosaur battle in a jungle and the sterile setting of the airplane. This drastic transition between settings leads to the driving question of the series, the question of how we get from the “then” of the private jet to the“now” of the dinosaur infested jungle. The confidence that Moore has in Henry and LaRosa’s ability to convey all of this through their art is well-placed. Thus far, the collaborative effort between these three creators is seamless.

Throughout SAVAGE #1, B. Clay Moore writes in an extremely understated way. It might seem odd to praise a comic that opens with a man fighting a dinosaur for demonstrating restraint; however, SAVAGE is well deserving of such praise. For example, Moore does not feel the need to explicitly state that KJ eventually becomes the title character that we see in the beginning sequence. He doesn’t use flashbacks or inner dialogue to explain what the characters are thinking or feeling. The nuance of the dialogue between Kevin and Ronnie in conjunction with the artwork is enough for the reader to fully understand the context of SAVAGE and the nature of Kevin and Ronnie’s relationship.

It would have been easy for the creators to fall back on stereotypes of celebrity couples and their obnoxious personality traits when creating Kevin and Ronnie. However, this couple is surprisingly down to earth given their wealth and fame. Yes, they have their eccentricities, but the creators manage to make both of these characters likable. This likability is necessary, given what we’re lead to assume about their fates on the island. If the feral man in the opening pages is KJ, something terrible must have happened to his parents. By making Kevin and Ronnie likable, the creators raise the stakes for their impending deaths.

READ: B. Clay Moore’s HAWAIIAN DICK made our list of 5 must-read noir comics! Find out what else made the list! 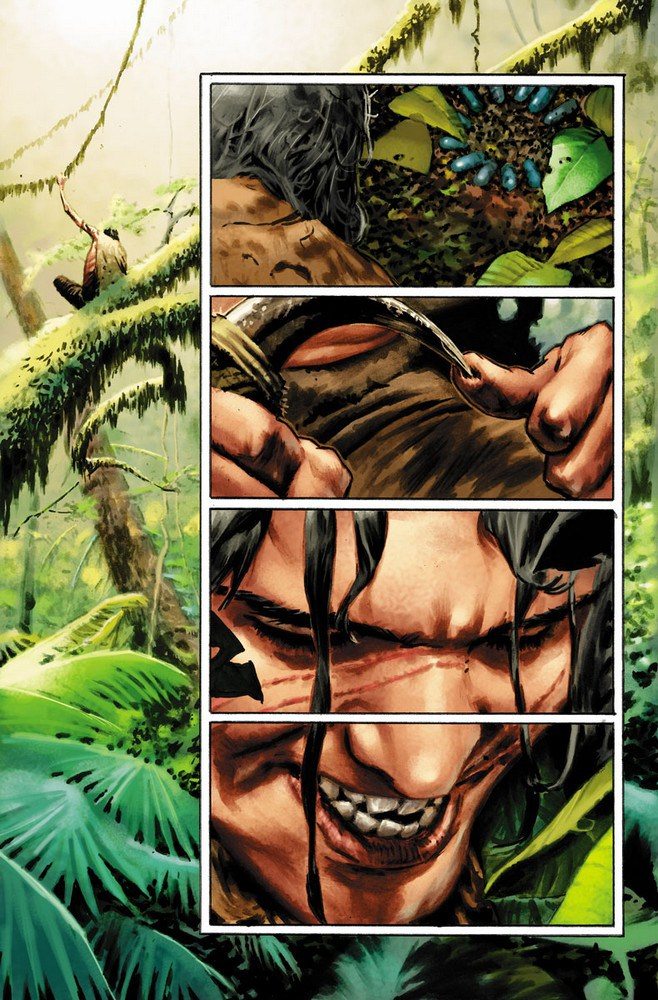 Despite the use of an extended flashback, we still can’t say exactly where SAVAGE is heading in terms of the plot. However, judging from the quality of the writing and the visuals in the first issue, the creative team behind SAVAGE has a lot to offer. If you’re a fan of dinosaurs or just a sucker for great art, SAVAGE #1 will sink its teeth into you and leave you wanting seconds.