After their private jet crashes, a celebrity couple finds themselves stranded on an island with their infant son. As they wait for what they believe is their inevitable rescue, they make a surprising discovery: the island is inhabited by dinosaurs. SAVAGE by B. Clay Moore, Clayton Henry, and Lewis LaRosa, is a story of survival, mystery, and lost humanity.

SAVAGE #2 follows the format of SAVAGE #1, utilizing flashbacks to tell the main narrative. In the present day, a young man survives by himself on the island, hunting on his own. We are lead to believe that this is the titular character and KJ, the infant, years later.

READ: But first, have you read our review of SAVAGE #1?

In SAVAGE #2, the flashback picks up exactly where SAVAGE #1 left off. Kevin, after boarding an abandoned boat and making a grisly discovery, comes face to face with a dinosaur. After Kevin dies in the first few pages of SAVAGE #2, Ronnie is left on her own to keep herself and baby KJ alive.

Through Kevin’s early death, writer B. Clay Moore is subverting the audience’s expectations. Kevin, in a stereotypical sense, seems primed to be the hero. He’s physically strong and the man of the family. Furthermore, Ronnie might seem unequipped to provide for her son in the jungle, but she manages. After jumping to a few years in the future, Ronnie and KJ are still alive. B. Clay Moore effectively replaces the male hero trope with something much more interesting, while still writing a comic that stars a male protagonist.

READ: If you’re looking for more dinosaurs, IVAR, TIMEWALKER is for you! If not, how about one of these other great Valiant comics?

This subversion is just one example of how B. Clay Moore’s writing has been consistently brilliant in SAVAGE. After revealing that there are dinosaurs on the island, we might assume that SAVAGE has no more surprises in store. Actually, SAVAGE would still be a really great comic if this were the case. But it’s not.

First of all, we find out in SAVAGE #2 that KJ and Ronnie aren’t the only humans occupying the island. Although this may seem insignificant in comparison to dinosaurs, the presence of other humans provides a level of tension that the dinosaurs cannot. The dinosaurs are definitely terrifying but they aren’t fulfilling antagonists. They’re predators, but they aren’t capable of evil since they’re just animals. Although we know very little about this group of men, there is at least the possibility of evil. 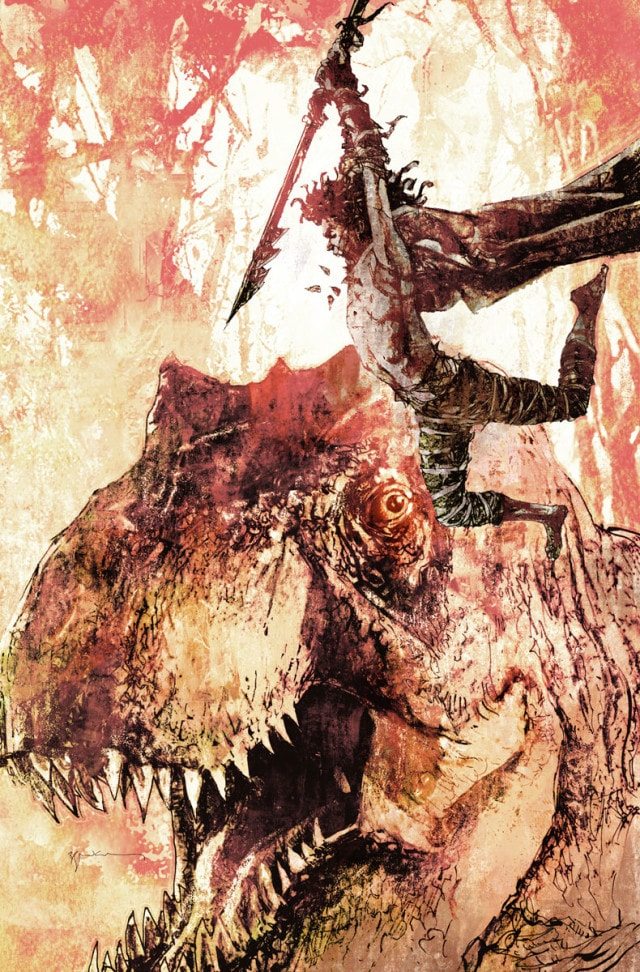 The only information we know about this group is given through small visual clues. One man is wearing a Mercedes-Benz hood ornament around his neck. Another wears a motorcycle helmet with horns stuck through it. This mix between a stereotypical tribal look and post-apocalyptic motorcycle gang fashion isn’t just an aesthetically interesting look. It informs the readers that these men are struggling to survive after arriving from a developed country, just like Ronnie and KJ.

The presence of this group of middle-aged men makes B. Clay Moore’s decision to kill Kevin all the more important. Being a female with a small child, Ronnie is particularly vulnerable and less inclined to trust these men by default. Instead, she chooses to remain hidden rather than risk a confrontation. Like Kevin’s death and the dinosaurs, the presence of this group of men once again ups the ante of surviving on the island, and adds to the mystery of where and what exactly this island is.

READ: Valiant fans, here’s what you should have been reading in 2016!

Things get even stranger when KJ, now four or five years old, tosses a rock at the water only to have it inexplicably bounce off of it. Ronnie reminds him that everything on the island isn’t what it appears to be. She advises her son not to trust anything. This violation of the laws of nature is thematically in line with the presence of dinosaurs. It’s one more inexplicable reality that, by all logic, should not be.

This anomaly with the water also suggests that the dinosaurs might not just naturally be on the island. Let me explain. Some cryptozoologists attribute cryptid sightings to prehistoric animals that never fully went extinct. The most popular of these theories is that the Loch Ness monster could be a plesiosaurus. There’s also a scientific precedent for the rediscovery of animals that were once thought to be extinct, such as the coelacanth. So, in the world of SAVAGE, the dinosaurs could have been explained away in this manner. However, the incident with the water reveals that the dinosaurs aren’t there by accident. Reality on the island is being manipulated by some force. In fact, it’s possible that the plane crash that brought Ronnie, KJ, and Kevin to the island wasn’t an accident either. 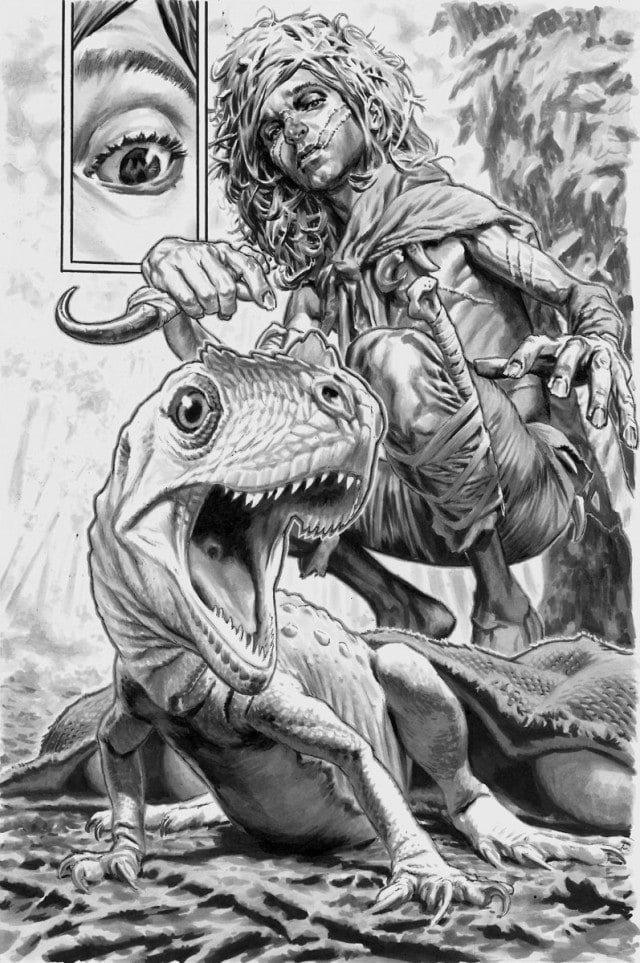 Although the highlight of SAVAGE #2 was the growing mystery and tension, I would be remiss if I did not once again mention how incredible the visuals are. I don’t think it’s possible to find comic book art that is of a higher quality or more effective in conveying meaning than in SAVAGE. B. Clay Moore places his well-deserved trust in these artists to convey subtle facts about the world and characters of SAVAGE. Significant portions of the comic contain little to no text at all, just really incredible visuals.

The artists use the visuals to create a perfect amount of contrast between events taking place in the past and those taking place in the present. The portions told in flashbacks are rendered in a more traditional style: crisp outlines, colored with the bare necessities of shading. On the other hand, the visuals from the present are fully shaded with subtler outlines, creating a more realistic look. This contrast is noticeable, but not too jarring or distracting from the narrative. By creating this distinction, the reader can open SAVAGE to any page and know exactly when the pictured events are taking place in the overall narrative. Clayton Henry and Lewis LaRosa have achieved a perfect merging of stylized comic book art and realism, and they do this in perfect harmony with the writing.

Overall, B. Clay Moore, Clayton Henry, and Lewis LaRosa, who are shaping up to be a creative dream team, once again deliver a strong entry in this limited series. The visuals in SAVAGE #2 maintain the high standard set in SAVAGE #1, as does the writing and pacing in general. SAVAGE is a visually powerful, compelling, and highly-nuanced series that everyone should be reading. If you haven’t picked up the first issue yet, you seriously need to.