Satanism brings to mind gory images of bloody sacrifices, candlelit rituals, and damnation of the eternal soul. It’s a religion with a bad reputation. Edgy teenagers and Biblical religious organizations haven’t improved that reputation. But is Satanism really as terrible as they say?

Turns out that Satanists are actually… saintlike. The first words printed on The Satanic Temple’s public website are these:

Who would have thought that we’d see the day where Satanists are fighting child abuse? Satanists are protecting school children who are facing physical abuse in Springtown, Texas. Corporal punishment is still legal in Texas and 18 other states, and Superintendent Mike Kelley recently passed legislation in Springtown to make it easier for teachers to spank and otherwise physically discipline students. The Satanic Temple is fighting against these laws by providing students with religious exemptions from corporal punishment. In spite of their reputation, Satanists are actively working to build a better future.

The Reputation and the Reality

Most of Satanism’s bad reputation is a result of widespread rumors and misinformation during the late 1900s. Evidence of Satanism that is linked to crime and evildoing is scarce. Heck, the Holy Bible itself barely even mentions Satan. A Hebrew scholar, Dr. Michael Heiser, wrote an interesting analysis where he notes that Satan doesn’t even exist in the Old Testament. Dr. Heiser suggests that the idea of Satan as a divine, evil being is the result of a spectacular mistranslation of the Hebrew language. From the conclusion of his article:

“This would mean there are ZERO verses in the OT (Old Testament) that have a personal name ‘Satan,’ and ZERO references to Satan as a cosmic evil entity as in the NT (New Testament).” – Dr. Michael Heiser, The Absence of Satan in the Old Testament

READ: Is Beyonce a Saint or a Sinner? Find out what we think!

Oh well, somebody had to take the fall for all those sins that good Catholics were committing. Who better than a nameless force of evil to take the blame? Guzzled the sacramental wine? Satan made me do it! An edgy teenager burned a bible in middle school? The Devil made her do it! Gilded the Vatican palaces with gold and jewels while kids are starving across the world and being abused in schools?  It’s for the Glory of God! Oh, wait… Maybe they should have cut their losses and blamed that one on Satan, too. In any case, suspicion and superstition created a bad reputation for Satanism far more than any actions of Satanists. This heavy-handed blaming on the devil peaked in the late 1990s and came to be known as the Satanic Panic.

The Satanic Panic was a period of moral panic from the 1980s to the late 1990s. A wide variety of gruesome crimes were blamed on Satanic ritualism during this time. The mysterious and evil force of Satanism terrified people across the U.S. and even throughout the world. Accusations without substantial evidence spread like wildfire. The Satanic panic has been compared to the McCarthyism of the 1950s when Senator Joseph McCarthy accused everyone left and right of being treasonous communist spies.

The Satanic Panic began in the early 1980s, after the publication of the book Michelle Remembers. Psychologist Lawrence Pazner and his patient-turned-wife Michelle Smith co-wrote the book. It details Michelle’s “remembering” of abuse by a Satanic cult. According to the book, Dr. Pazner helped draw out Michelle’s repressed memories through 600+ hours of hypnosis. The two continued on to perform a large publicity campaign where they participated in interviews and eventually began teaching people to recognize the warning signs of Satanic ritualism in their hometowns.

READ: The Death of SUPERMAN as an American Icon!

After investigators looked into claims of Satanic ritualism nationwide, they found no proof of any harmful activities. Unfortunately for the modern Satanists, the moral panic left a lasting stain on their already tenuous reputation. They’re starting to make a comeback, though. Satanism is getting a surprising amount of good press these days.

One of the biggest misconceptions of Satanists is that they worship the devil. They don’t. In fact, modern Satanists consider themselves to be atheists. A man named Anton LaVey is the founder of contemporary Satanism and the author of the Satanic Bible. Some divisions of Satanism even treat him as a prophet. All of the major branches of Satanism today come from LaVeyan Satanism. However, the newer offshoots of LaVeyan Satanism are more agreeable than the original Church of Satan.

Also known as the Church of Satan, this is the largest contemporary division of Satanism. These traditional Satanists follow the tenets and practices of the Satanic Bible resolutely. The Church of Satan is characterized by its pursuit of intellectualism and its rigid hierarchical structure.

LaVeyan Satanists have a grand idea of their own intellectualism. Portions of their website read like they were written by a particularly poetic teenager who’d just finished reading Machiavelli:

“We are the first above-ground organization in history openly dedicated to the acceptance of Man’s true nature — that of a carnal beast, living in a cosmos that is indifferent to our existence.”

The rest of the website is similar. Once you’ve sifted through all the wordy intellectualism, there are interesting and even identifiable values to be found. For example, the fourth tenet — “Satan represents kindness to those who deserve it instead of love wasted on ingrates!” — is exactly how I feel about my freeloading “friend” who always needs a ride and “forgets” his wallet.

READ: Video games are more detailed than ever… maybe too detailed?

Unfortunately, LaVeyan Satanism gets weird from there on out. A significant portion of the Satanic Bible is dedicated to the practice of Black Magic. Practitioners of LeVeyan Satanism employ Black Magic to attain goals by “influencing” the world and the self. The practices are harmless, and the church rebukes many common myths about Black Magic on their FAQ page. Whatever their reasoning, the practice of Black Magic stands at odds with the Satanists’ otherwise intelligent and scientific approach to the world. There has been much internal controversy within the church, which has led to some groups breaking away to form their own Satanist religious organizations. The Satanic Temple is one of the most prominent of these groups.

The most progressive division of modern Satanism is, by far, The Satanic Temple. They differentiate themselves from LaVeyan Satanism in three large ways: 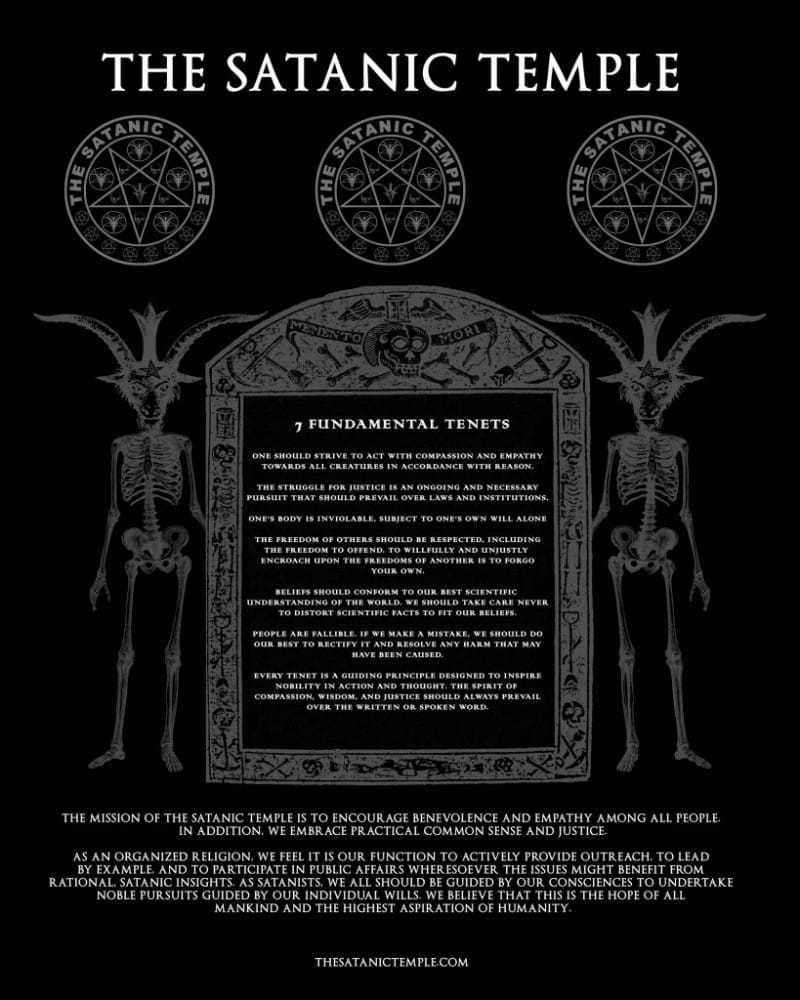 Their website is easy to read. Their beliefs and tenets are easy to identify with. They aren’t trying to come off as a mysterious, dark, and dangerous force of authority in the world. Their focus is on positive change in the world through activism. They’re not trying to be the biggest, baddest Satanist gang in town — they’re just trying to make a difference through their projects. 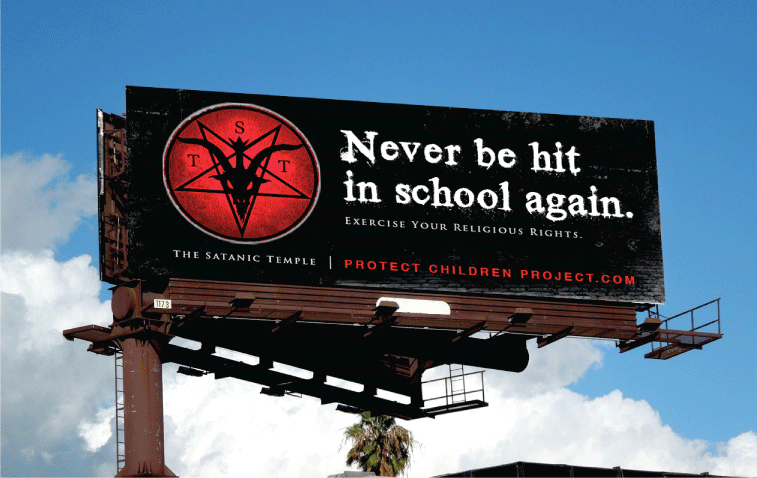 In addition to their After School programs, the Satanic Temple also promotes reproductive rights by providing religious exemptions to controversial laws such as the Texas Fetal Remains rule. The Texas Fetal Remains law requires that fetal remains, no matter the trimester, be given a full burial instead of simply being disposed of humanely. This puts financial burden and emotional trauma onto the women who went through the procedure. The Satanic Temple invokes the first amendment to allow women to adhere to Satanist burial rites. This gives women freedom to carry out medical procedures safely and without interference.

TST also sponsors movements like the Grey Faction, which seeks to expose malpractice and pseudoscience in the treatment of mental health. You can find a full list of their campaigns here. In essence, they use their rights and protections as a religious organization to fight unfair laws and practices across the country. Fighting injustice and campaigning through activism has become the core foundation of The Satanic Temple’s beliefs, stepping away from practices like Black Magic altogether. Some Satanic Sects, on the other hand, have chosen to make Black Magic their core foundation.

READ: DEADPOOL has kicked open the door for more R-rated action! Check out what’s coming up in 2017!

There are still a few fringe groups of Satanists who actually believe in and worship the devil as a deity in some form or another. The Temple of Set is the most prominent of these. As their name suggests, they worship Set, who they believe is the same deity going by different names throughout history and religion. The Temple of Set practices Black Magic as a core component of their beliefs.

It’s important to clarify that Theistic Satanists generally do not view Satan as the embodiment of all evil. Most Satanists see Satan as a symbol of important modern values such as individualism and intellectualism. Satanists aren’t evil people. They don’t make blood sacrifices. Hell, you probably believe in most the same values that they do. To Satanists, Satan represents core human values that have been shunned by Biblical religions. Where Catholicism decries material pleasures, Satanism encourages them in healthy moderation. After all, who doesn’t enjoy two slices of cake every now and then?

Satanists Are Hardly The Devil

At the end of the day, Satanists just like their cake. They are normal people who like having fun! They worship intelligence and individualism. Some of them are even fighting for good causes. In today’s day and age, being a Satanist isn’t evil. It’s a religion that supports independence and science. Satanism is for people who enjoy healthy and safe pleasures in life, and don’t like being told they’re sinners. The modern era is outgrowing old religions and Satanism comes from that growth. Check it out, because you never know — you just might be a Satanist.