As I shuffled aimlessly through the three floors of the Strand bookstore in New York City, I couldn’t prevent the barrage of emotions inflating my eye ducts. 2017 has battered me with surging depression, inevitable heartbreak, and boundless anxiety, all gloriously devouring my psyche. Crying has become a daily routine as frequent as eating; I’ll cry anywhere. At the gym. At the grocery store. At a book signing trying to combine work with pleasure. It doesn’t matter. Disparaging thoughts burst out my brain like a newborn xenomorph cracking open people’s chests in ALIEN.

However, the anguish, as much as it’s tearing me down, also is helping me grow. This is not the first time I’ve battled mental illness, and it probably won’t be the last. One thing that tempers the pain is art. I’ve done poetry, I’ve done a video, and now I’m doing webcomics. Nobody does relatable hilarious and poignant webcomics better than Sarah Andersen. She’s become a trailblazer for short form comedic webcomics. I can’t help to feel motivated and believe a similar path is possible, so when I saw the opportunity to attend her signing and Q&A for her new book, BIG MUSHY HAPPY LUMP, I knew I had to attend. 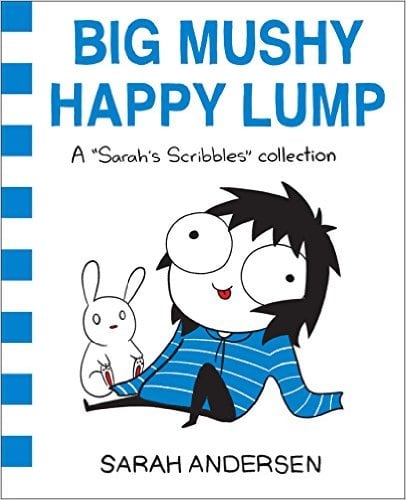 Her work through the character “Sarah Scribbles” inspires people across the globe. The comics she makes rarely surpass four to six panels, but the message they produce is profound. If her large following on Facebook, Twitter, and her website wasn’t conclusive enough, the passionate crowd at her book signing sealed the deal. During the Q&A portion, there was no shortage of compelling questions. Aspiring webcomic creators, eager students, and bright-eyed children were all itching to pick her brain. I wasn’t surprised, but it was certainly motivating and moving. 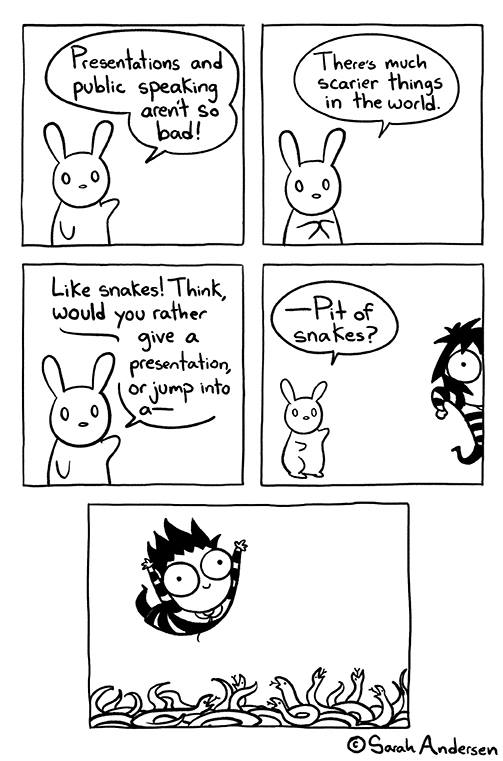 Andersen gave wonderful advice to people trying to “make it” in webcomics, which particularly resonated with me. She discussed the patience one needs when first starting out, especially regarding comics that aren’t getting attention. Having a defined and consistent schedule for posting was important too. As the conservation went on, I couldn’t help but be enamored with her poise, and her protection of her artistic property. T.V. deals and working with organizations like the Women’s March all got brought up, but Andersen insisted the situation has to be right and comfortable for her to take that on.

Her comics are effective because people see themselves in the character of Sarah. Even when gender comes to play with quirky boy vs. girl comparisons, or the infamous Kool-Aid-wall-smashing-type uterus character, the humor breaks any lingering wall left standing. How she confronts anxiety, and social confrontations is also very valuable. Much like a stand-up comedian, she shares her vulnerabilities, and she’s all the stronger for it. It gives people a beacon to gravitate towards. It allows them to know they aren’t alone. I can’t express how admirable that is because it isn’t easy. She’s quietly erasing stigmas, which simultaneously gives people hope and sets a great precedent for kids admiring her work.

READ: Love humor? Then our interview with comedy comic guru Kyle Starks is for you!

If you’re like me, Andersen’s work is therapeutic. It takes these dark, and often delibating, issues and erases that pain to bring a smile or giggle. Even if the reprieve from misery is brief, it’s a huge gift. 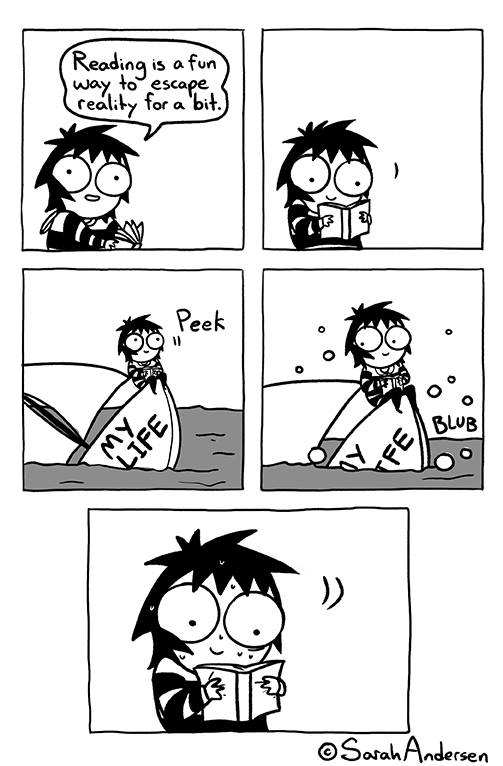 As I left the event, the tears finally gurgled out of me. Yep, I became the freak who cries in public, in the middle of the bustling Manhattan streets. The rust from reflecting on my recent shortcomings in love, friendship, and the professional world eroded the levies keeping that emotion in. Being as distraught as I was, I was also grateful. To see someone my age be this successful is very encouraging.  Art breaks barriers. It allows us to connect in dire situations.

“Sarah Scribbles” is a beacon of hope for many people. Sarah Andersen’s comical takes on mental health provide much-needed relatability on a reality that can be unbearable for a lot of us. She’s a role model for artists, children, and people looking for a brief escape, so look-up her stuff and buy her book. Her material deserves to be shared with anyone troubled or just in need of a laugh. It has certainly helped me continue breathing and move forward even amongst the tears.