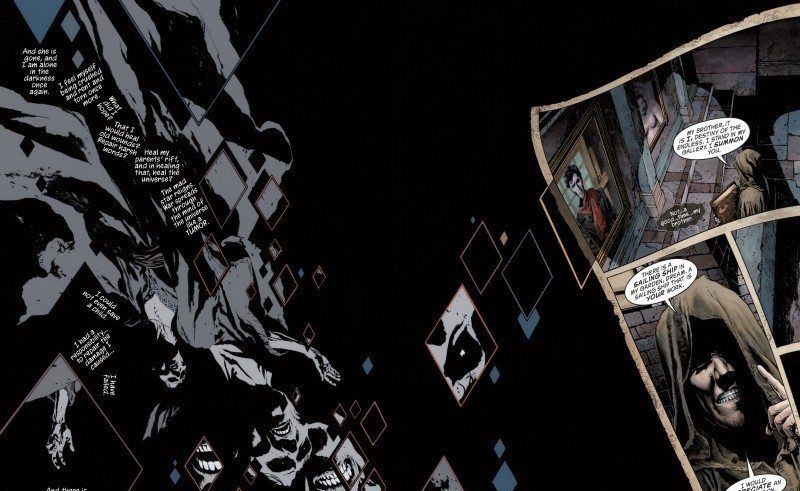 All fables, all myths, all accounts of the supernatural, and most highly unlikely stories have their origins in dream. Their retelling may have social purposes that benefit their reteller, the details within them may be chosen to cast the world from which they sprang in one light or another, and the morals they embody do, of course, reflect the ideologies of their craftsmen and craftswomen. But the fact of them, their very existence, is owing to the happenstance that we humans dream. This is what makes SANDMAN true. Did Shakespeare dream of things to do with The Tempest before and during the writing of it? He must have. How, after all, does anyone create art or fiction?

As certain as it is that stories’ origins lie in dream, just as certain is it that the origins of misperception lie there as well. Dreams billow up out of the unconscious when we mishear someone, missee something, feel an unexplainable sense of narrativity, or mistake our present experiences for ones foreseen or foredreamed. But why does it disturb us so little when dreams tread into the real for a moment, covering over their events with the solipsistic, the paranoiac, the embarrassingly hopeful? They are only dreams, after all, and ignoring them is the easiest thing in the wide waking world.

READ: How do delays in the comic industry impact the fans?  Find out here!

This is what makes SANDMAN good for society. When we pay attention to our dreams, we are confronted with our fallibility, the insignificance of our gut reactions, the limitless possibilities that we are mistaken to assume that we already understand. To remember one’s dreams is to be humble, to dismiss them is to pretend that one’s conscious mind is fully in control of oneself – to imagine oneself an island. Put differently, we do obeisance to the Dream King when we fruitfully remember the stories he has crafted for us during the third of our lives we spend traveling his realm, and we deny him his kingly rights when we forget the landscape of his kingdom immediately upon leaving it. 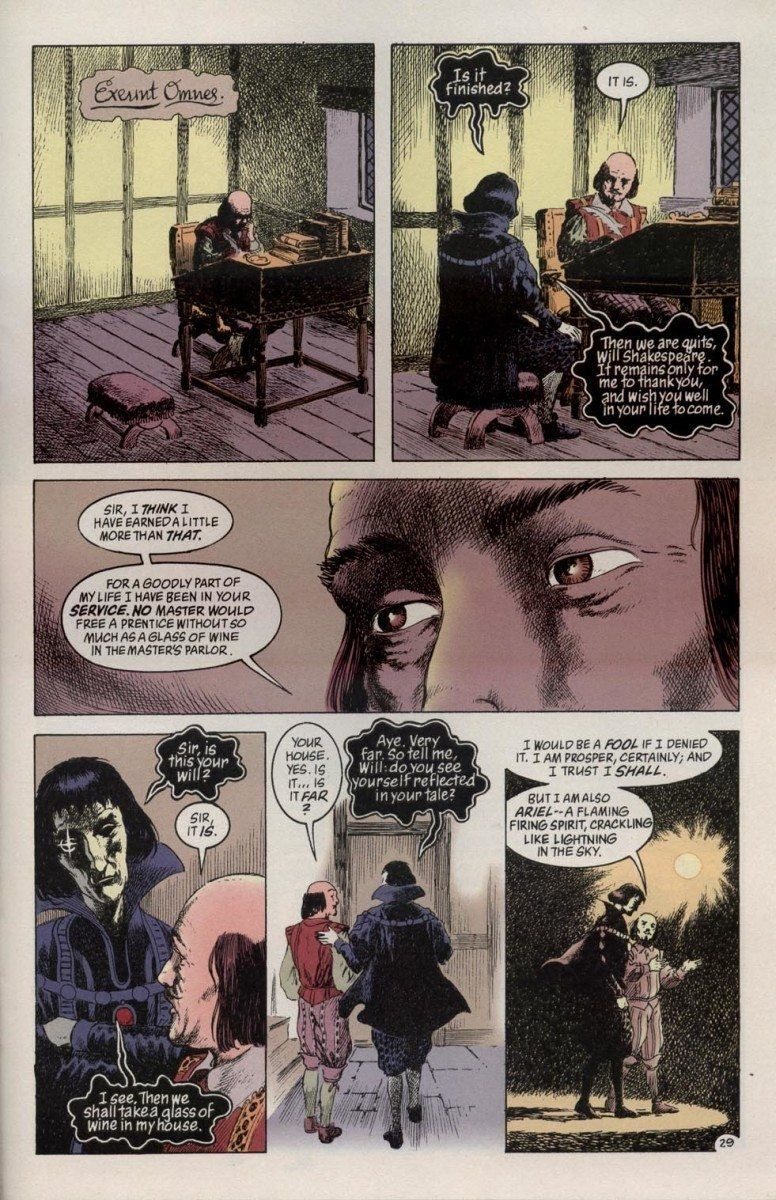 But the Dream King is no miser, no petty baron. He is truly regal, always giving more than he receives, never letting his guests feel unwelcome, never letting his decisions cause unexpected harm. The 90 or more per cent of our dreams that we forget are not a tax he levies, but the tragic nature of his craftsmanship; the greatest stories we can experience are doomed to be forgotten despite the best efforts of the god that made them- despite the cosmic power of a being before whom even gods humble themselves.

In the setting of SANDMAN: OVERTURE, as in all of Gaiman’s SANDMAN comics, the cosmos is presided over by 6 beings, the Endless, who were given birth by their mother, Night – personification of space itself – after their father, Time, inseminated her. These 6 Endless are Desire, Despair, Delirium, Destiny, Death – these two both pictured below – and our protagonist Dream, aka Morpheus. (There was a seventh endless, Destruction, but he retired from his cosmic duties for reasons readers will have to peruse SANDMAN Vol. 7: “Brief Lives” to investigate.) The reason for Dream’s appellation Morpheus is obvious, but he is also known as Oneiros, Lord Shaper, the King of All Night’s Dreaming, the Prince of Stories, and of course, The Sandman. 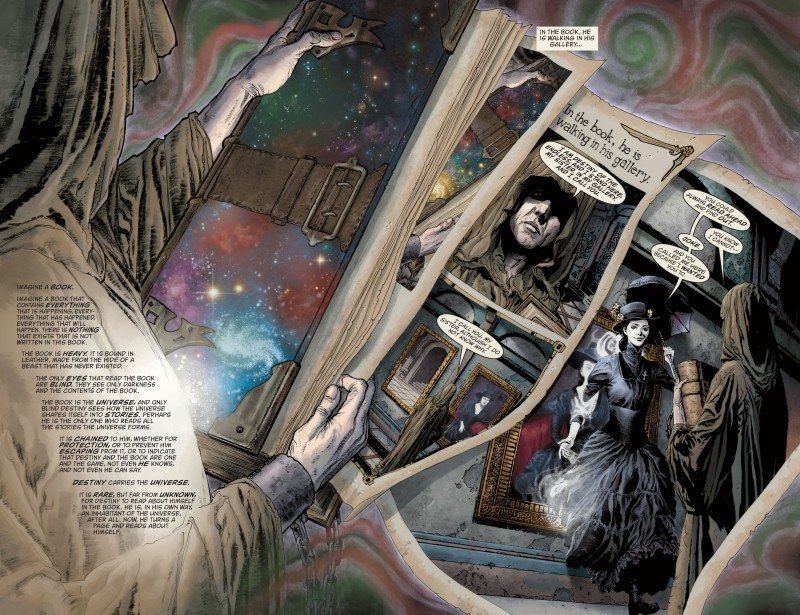 Among his siblings Dream feels the most sympathy and concern for sentient life. It is the only part of existence that needs him. It is a small part of the cosmos, of course, even of a cosmos teeming with all manner of alien races, and especially when shared with his siblings Delirium, Despair, and Desire. None of this half of the Endless pantheon has much place in a reality without sentience, but Dream’s role is greater than his siblings’—and his realm is not reality anyway. On a given day one life form may be sad or happy or lascivious or delirious, but it will assuredly dream. And it will also assuredly have need of stories in its life.

When SANDMAN’s author Neil Gaiman is asked how he writes his stories, he reports that it’s more like they write him. The winner of the Hugo, Nebula, and Bram Stoker awards and repeat New York Times bestselling author has had his share of well-received stories written through him: his graphic novels Stardust and Coraline were adapted into feature films, and a television adaptation of his prose novel American Gods is currently in development. Most recently, Gaiman’s 2013 prose novel The Ocean at the End of the Lane debuted at #1 on the New York times bestseller list, was nominated for Nebula and World Fantasy Awards, and won a Locus, Book of the Year at the British National Book Awards, and the Goodreads Choice Award for fantasy. And as of its completion, OVERTURE was nominated for and won the editors’ pick of Goodreads’ parent company, Amazon, for best comic or graphic novel of 2015.

When once asked why he and artist Mike Dringenburg designed Morpheus to look something like a mixture of Gaiman himself and Bauhaus singer Peter Murphy – though The Cure’s Robert Smith has more often been guessed by fans – Neil responded that he had trouble identifying with heroes in tights, and wanted one to dress the way he did, but of course to also have that dark deific Endless twist. Aside from looking for the most part like a mortal, if an eminent one, Morpheus acts like one, spending much of his time simply speaking with others of the cosmos’ various powers. He negotiates with them from the position of his strength as an Endless, but reserves his reality-altering powers for the rarest of occasions. He puts on a show of stoicism that is among the most genuine in fiction, but still conceals an essential and dependable humaneness that stems from his position as the Endless who presides over narrative, creator and preserver of the very stuff of consciousness as we know it.

Morpheus’ sentimentality toward sentient and arguably mortal life is his weakness in SANDMAN: OVERTURE, but also his strength, as perhaps in “Dream: Heart of a Star,” the standalone chapter in SANDMAN: ENDLESS NIGHTS (2003) that has its prehistoric events linked up to those in the very first issue of SANDMAN (originally published in January 1989) by OVERTURE. In this sequel to the prequel published 12 years ago, but prequel to the phenomenon begun in 1989, Morpheus seeks to defend sentient life, but holds himself responsible for the creation of the very threat against which he defends, due to an act of mercy that unwittingly brought it into existence. But as ever in SANDMAN comics, the compassion was mixed, and no individual – Endless, god, or mortal – comes out imperfectly good or evil; they are fallible and flawed.

The Sandman’s nature is revealed to be essentially multiple in OVERTURE, so in fact it is each incarnation of him that is fallible. Most of the six-issue comic’s journey is trod by two of his forms together: that depicted as his primary default form in 1915, and a giant cat, the king of cat dreams presumably, and possibly hailing from the realm in which giant cats toy with their tiny human pets depicted in “A Dream of a Thousand Cats” in SANDMAN Vol. 3: “Dream Country.” Fans of the series may recall that 1915 is the year in which Sandman, deeply weakened for unexplained reasons, is summoned and trapped by Aleister Crowley analogue Roderick Burgess. OVERTURE is the explanation.

OVERTURE also prominently features the other Endless – all but Despair, who does at least appear in flashbacks – both of Dream’s parents, many other of his forms, a sentient star or two, and a little girl from the place the Endless may not go, whose parents were killed by raiders who anticipate the cosmic death that Dream seeks to prevent. Its explicit connections to “Heart of a Star” consist more of shared names and themes than a chronological continuity. Still, the reader can depend on the series leading squarely and directly, by logic more concrete than dream logic, to the opening images of SANDMAN #1 from 1989.