SANDMAN: DREAM COUNTRY presents explicit imagery and content. As a result, some of the content may be a bit of a trigger for some readers. This article may also give away important plot details, which I use as evidence for the article. Spoilers ahead!

Everyone is willing to sacrifice for a dream. But how much are you willing to give up?

SANDMAN: DREAM COUNTRY by Neil Gaiman introduces readers to the extent of Dream’s reach. This graphic novel compiles issues 17 to 20, weaving a narrative that ties together the realities that dreams can bring. The stories address how mankind has a knack for only seeing what they think are their aspirations. They do not see the sacrifices and consequences that come with them. While trying to achieve their goals, these characters completely miss the sacrifices and consequences each will have to deal with.

In the “Calliope” issue of SANDMAN: DREAM COUNTRY, Gaiman presents us with a writer, Richard Madoc, who suffers from writer’s block. He manages to trade a bezoar (or hairball) for the muse, Calliope, who is the muse of poetry, music, and epics. In order for Madoc to overcome his writer’s block, he assaults Calliope. Calliope asks her sister Muses for help. Although there are few of the Gods and Goddesses left, the three Muses bring Morpheus to help. Morpheus asks Madoc to release her or face punishment. Madoc refuses to let Calliope go, so Morpheus punishes Madoc. He does this by forcing Madoc to experience something worse than writer’s block: a flood of inspiration. To escape the constant inspiration, Madoc then frees Calliope. 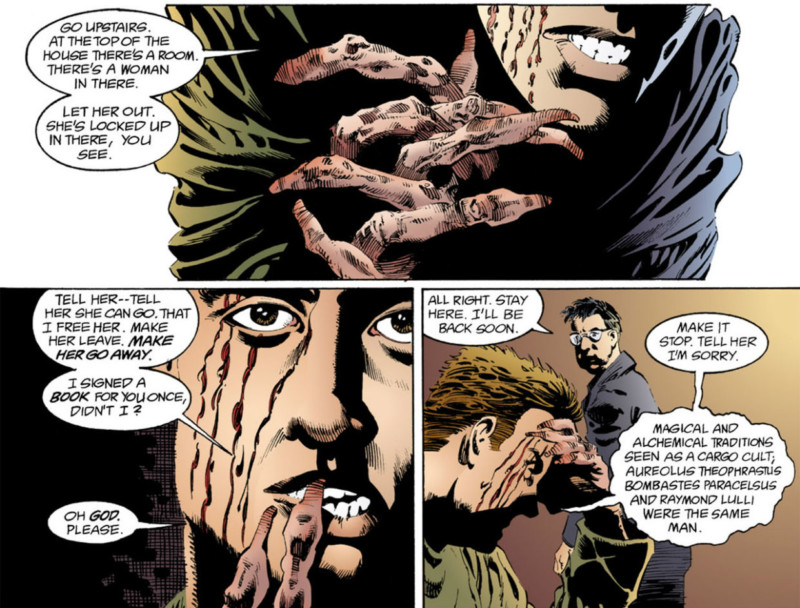 In order for Madoc to overcome his writer’s block and achieve his ultimate goal (being famous within literature, then moving to directing films and plays), he sacrifices his morality. Madoc’s first assault on Calliope is described as being done “nervously.” This indicates that Madoc knew what he was doing was wrong, but he did it anyway to find an inspiration. He even tried to talk himself into believing that what he was doing was not wrong, that “she’s not even human.” By dehumanizing Calliope, it makes defying his personal morals more simple. If he does not imagine her as a human, he then he has an easier time in the assault. Madoc sacrificed his morals to be able to write creatively. He lost himself in the process of finding inspiration.

The Price of Fame is Steep, As It Should Be!

In the SANDMAN: DREAM COUNTRY issue “A Dream of a Thousand Cats,” we follow a kitten following a large group of cats that are anticipating the story of a stray Siamese cat.

This stray says she was once a house cat who believed she had freedoms. It was not until she met a stray male cat and had kittens that she started to resent her humans. The cat was happy to be a mother, but her humans saw the kittens as burdens. The humans murder the kittens, making the Siamese crave justice for her kittens.

She dreams of meeting Morpheus and asks why humans would take her children away. Morpheus shows her a reality where cats are larger than humans. Humans were small compared to cats; they were servants to cats during the day, then hunted at night. The humans banded together and dreamed of a world where they were larger. After 1000 humans dreamed, the world reversed and no one even noticed. The stray implores the other cats to dream of a new world order, just as the humans once did.

The sacrifice the stray Siamese makes is that of a comfy life. For her to recreate the world she dreamed of, she gives up living with humans. She abandons the humans that did her wrong and wanders the country, telling other cats of the things she has dreamed. Her desire for vengeance and to rebuild a new world order keeps her from a comfortable lifestyle. Her desire to separate herself from the humans forces her to endure living alone and in the wild. She travels far, spreading the message of “a world in which all cats are queens and kings of creation,” hoping enough cats will dream of a new reality. Her hopes are to find paradise, but she lives in essentially cat Hell until the new world is dreamed.

If Only We Listened to Our Cats More

Unfortunately, the older cats ignore her and say her dreams will never happen. Only the kitten seems to believe her. The stray cat continues on her journey, hoping to have enough cats to someday return to paradise. By the end of the comic, the kitten is sleeping back at home. The humans wonder what it is dreaming of, thinking perhaps the tiny kitten is hunting some small creature? Although the story leaves in a cliffhanger, it is clear the stray Siamese never accomplished her goal. The stories that follow all contain a world where cats are still pets. This stray Siamese may have the dream of social reconstruction; it will never be accomplished. So although the Siamese is willing to do all this work for a new world, she will never be able to receive it.

Shakespeare also has a place within the realm of Dream. Within SANDMAN: DREAM COUNTRY exists “A Midsummer’s Night Dream.” There, Morpheus enlisted the help of Shakespeare to entertain his friends from Faerie. The fairies mention how they recognize some of the things happening in the play, making the play more interesting to the magical audience. Through side discussions, we learn that Morpheus and Shakespeare have a deal. If Morpheus gives Shakespeare the ability to write plays that transcend centuries, Shakespeare will write two plays for Morpheus. A Midsummer Night’s Dream is one of the plays Morpheus has orchestrated.

Shakespeare is able to write these plays only with Dream’s help. Shakespeare, however, has become distant from his family. In a brief dialogue with an actor, Shakespeare’s son, Hamnet, reveals that he rarely sees his father. Hamnet’s mother ordered him to stay with his father for the summer. Hamnet goes on to comment how his twin sister makes fun of his relationship with his father. “Judith — she’s my twin sister — she once joked that if I [Hamnet] died, he’d just write a play about it.” In order for Shakespeare to write plays that transcend centuries, he gives up on his family. Everything he sees and does becomes a play, making his family less real to him. 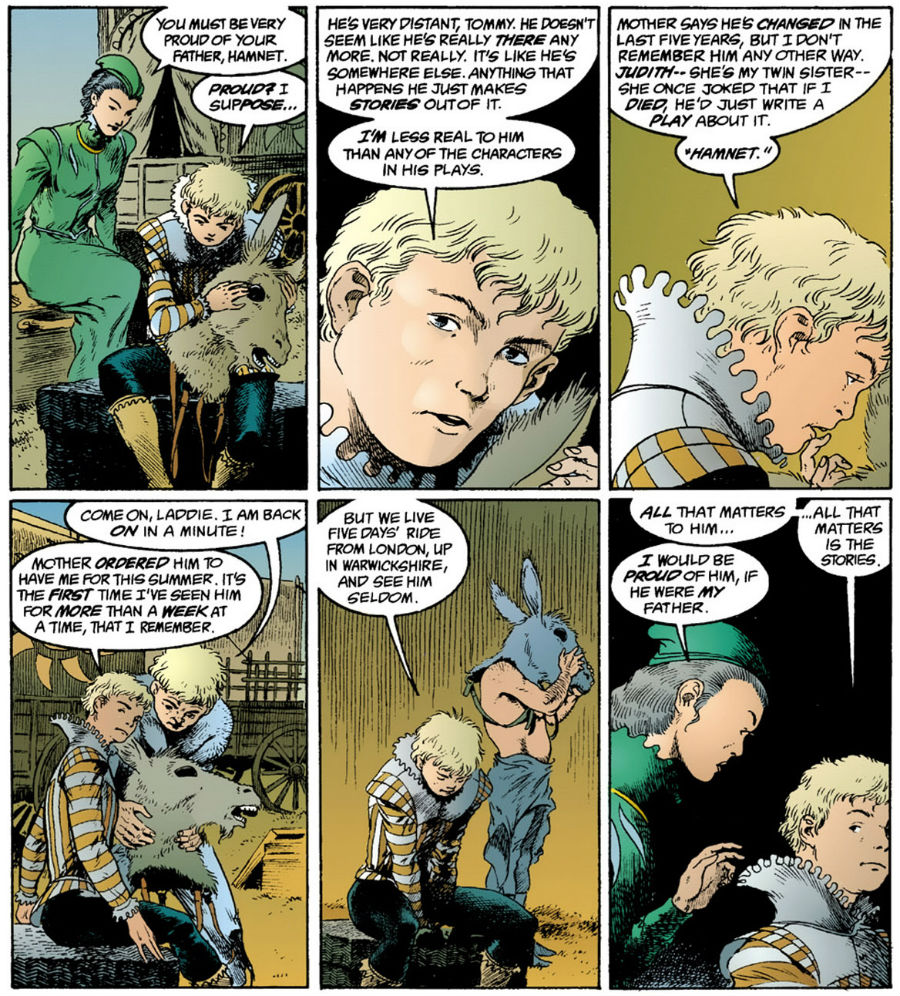 Shakespeare’s sacrifice and consequences take a little effort on the reader to understand. Shakespeare has given up on his family so he could have centuries of fame. Shakespeare makes life less real by turning everything he sees into a play. He is oblivious that his family feels abandoned by him. This results in Shakespeare possibly writing a play in regards to his son. By the end of the comic, we realize that Hamnet dies three years later. If the reader is familiar with Hamlet, the reality of Hamnet’s sister’s joke is dark. It insinuates that after Hamnet’s death, his father did make a play called “Hamlet,” inspired by the death of Hamnet. It reinforces that Shakespeare’s family is not real to him. They are just props with which he can write plays.

SANDMAN: DREAM COUNTRY: What you Think You Want versus Unintended Consequences

The final installment of the SANDMAN: DREAM COUNTRY collection is completely different from the first three comics. “Façade” follows Urania “Rainie” Blackwell (AKA Element Girl) as she struggles with the reality of her life in retirement. She thought of herself as a freak and grew tired of having to deal with the day-to-day issues of looking dramatically different from everyone else. She had contemplated suicide many times, but none of the attempts have worked. Death, who just so happens to be in the neighborhood, hears Rainie crying and tries to comfort her. Element Girl begs Death to “give [her] oblivion,” claiming that she cannot stay in this hell. Death tells her that the only Hell Rainie is living in is the one she creates. Death pities Rainie, so Death tells Rainie how to turn to dust. 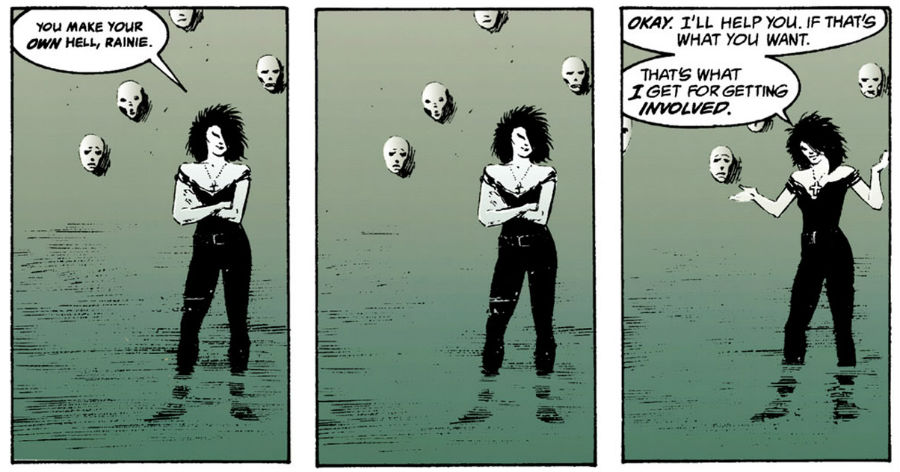 Although distinctly different, this story still has the same threads as the first three. Before being Element Girl, Rainie had dreams of being a superhero. For Rainie to become a superhero, she follows a man from the “Company” in the hopes of being the next American Super-Woman. She goes into the tomb of Ra, but she did not get what she thought she would. The DC Universe creates an idealized version of super powers. If she expected to look like Wonder Woman, she was sorely disappointed. Although she has become a superhero, she sacrifices her physical body. Her body mutates and is made of different elements. Rainie dreamed of having powers and being an idol. She never considered the price of losing her normal, physical body. She got what she wanted, but it was not exactly what she thought it would be.

Death does give Rainie what she wants, but Death warns Rainie that life is only as bad as she makes it. Rainie completely misses this point and only acknowledges that Death is going to give her the death Rainie desires. The end leaves us with a cliffhanger. Although an easy assumption would be that Rainie died, there is an inkling that perhaps Rainie did not. Death was not originally in the apartment to collect Rainie. Although Rainie’s physical form has turned to dust, Death was not the person that took her there. The comic also ends with Death saying, “Have fun, Rainie. Better luck next time.” This also creates another aspect of the story. What if Rainie did not die, but rather just changed her physical form? The reader is left to speculate what has happened to Rainie. 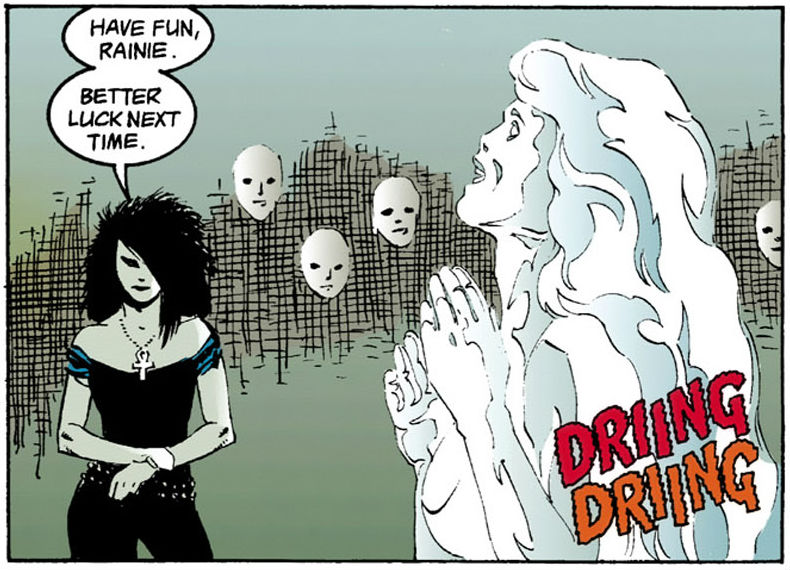 While Death being in the volume’s final story may be a just a coincidence of the order in which the issues were originally published, it does create a sense of finality to the stories. The first three stories may have been fun and interesting, but the theme had to end the way everything ends: with death. The stories weave the theme together, reminding readers to be mindful of their own dreams. As Morpheus said, “They [humans] only see the prize, their heart’s desire, not their dream… but the price of getting what you want is getting what once you wanted.” Neil Gaiman reminds us to mind our dreams. Because if we only see our dream, we may miss the price we have to pay until it is too late.