A Hero’s Journey through Dream

Neil Gaiman is a master of his craft, creating adventure stories that provide a new perspective on old story structures. One such structure is Joseph Campbell’s Hero’s Journey, a concept where a hero generally follows the same, basic outline. Campbell’s steps include: a call to adventure, crossing the threshold, meeting of the goddess, and the return to adventure. In SANDMAN: A GAME OF YOU, Gaiman provides the reader with a different perspective of the Hero’s Journey. He represents the journey through the lens of a female hero. 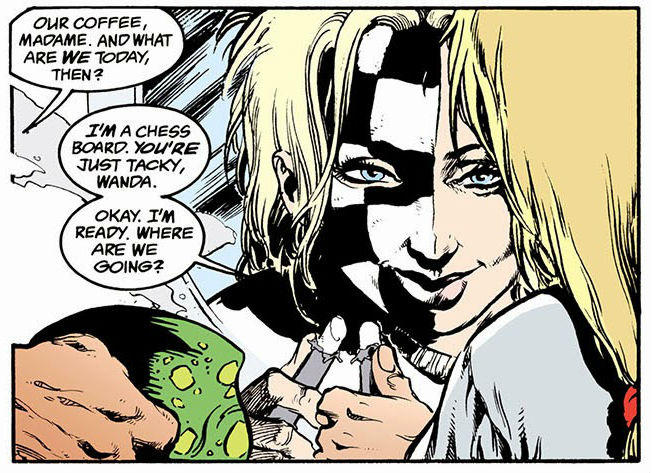 Barbie as a Hero

The hero’s journey is predominantly told from the perspective of a male hero. With a few exceptions, like BONE by Jeff Smith, very few comic titles have explored the hero’s journey with a woman. Gaiman takes advantage of this. He writes a cast consisting of mostly women, addressing problems women face, and giving us a female lead that exists in a dual social space.

The main character is a woman named Barbie. Although Morpheus is present, he isn’t the focal point of the story. He’s constantly telling other characters in the Dreaming that, although something is wrong in the dream realm, to wait to see what happens. Barbie has reoccurring dreams consisting of her being a princess in a fantasy realm called the Land. In reality, she’s an unemployed woman living in a tough New York City neighborhood. Barbie does things her way. She does her make-up in half checkerboard style and proudly walks to Tiffany’s & Co. She isn’t defined by societal standards — she does things how she wants. Barbie embodies both the princess and a free, expressive spirit all at once.

READ: Looking for another character distantly connected to the DC universe? Here’s our argument for THE KAMANDI CHALLENGE! 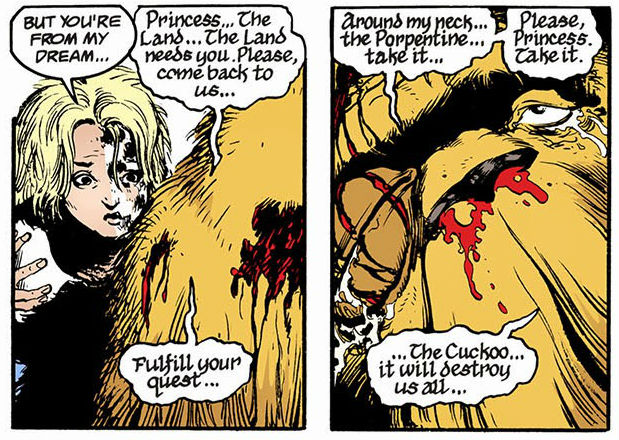 A Call to Adventure

When headed towards the upscale jeweler, a giant dog-like creature bombards her. Barbie recognizes the beast as Martin Tenbones, a creature from her dream. Tenbones warns Barbie that her dreams are an actual location. He says that the Land is in trouble, that a creature named the Cuckoo has been destroying the Land. She is needed. He gives Barbie a Porpentine right before the police shoot him to death. According to Joseph Campbell, the first part of the hero’s journey is the call to adventure. For the hero to have an adventure, an opportunity has to present itself. When Tenbones visits Barbie, he starts the chain reaction that begins Barbie’s journey. Tenbones’s existence is a supernatural act. He is originally from a dream, so his exit from her dreams into reality exemplifies the essence of supernatural happenstance.

Refusal of the Call

Initially, Barbie tries to avoid her journey. Hazel, an upstairs tenant, comes down from her apartment, wanting to talk to Barbie. This discussion lasts a while: Hazel is upset over the thought of being pregnant. Hazel represents the Threshold Guardian. She prolonged Barbie from entering the Dreaming. It wasn’t until Barbie gave Hazel advice that the latter left. It serves as a way for Barbie to be prolonged from her adventure until she’s proven worthy. Barbie gives Hazel some positive advice, which symbolically gives Barbie the worthiness to start her adventure.

Hazel also addresses an issue a lot of Hero’s Journey stories don’t include. Due to lack of information, Hazel has to find a way to tell her girlfriend that she’s pregnant. This creates a different type of Threshold Guardian because she poses a problem to Barbie that most male heroes don’t have to deal with. This makes the story more female-focused. 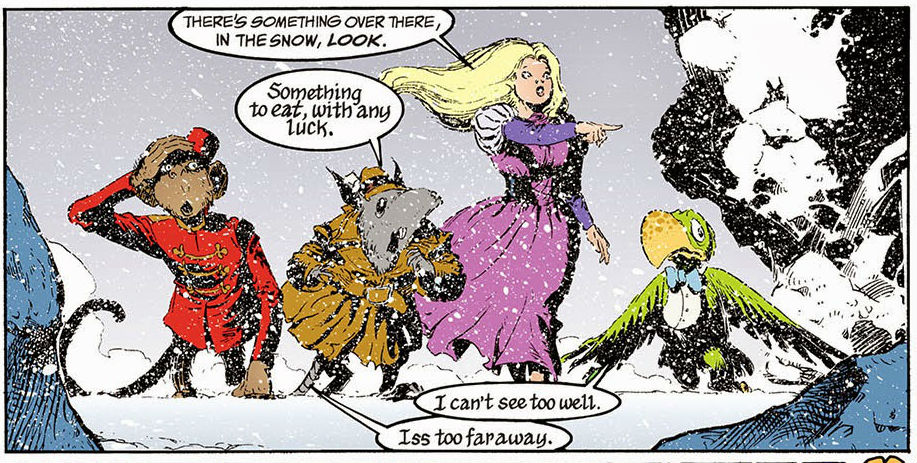 Crossing the Threshold and the Magical Relics

Once Hazel leaves, Barbie tries to stay awake by watching television. It doesn’t work for long and she eventually falls asleep which initiates her journey. She has taken the supernatural aid (the Porpentine) and crossed the threshold. Barbie watching television and trying to stay awake is a way of rejecting the journey. She knows that, if she were to fall asleep, she would enter the Land. After seeing Tenbones, she’s worried about beginning her journey and tries her best to reject it.

READ: Prefer darker undertones in books? Take a look at our piece on Superman in the 21st century!

As soon as Barbie sets foot onto the Land, she’s already dressed as a princess. She’s accompanied by three beings from her dream: Wilkinson the rat, Luz the bird, and Prinado the monkey. This entrance into the Land is symbolic of Barbie heading into the belly of the whale. She’s immediately in danger from the moment she arrives. Barbie and company have to hide as they travel across the country in search of a relic called the Hierogram. However, Barbie isn’t dressed as an average hero would be. She’s in her princess attire and continues to fight for her land.

The Road of Trials

Gaiman took an opportunity to present a hero that’s really a princess. He’s managed to pull the rug out from under the Hero’s Journey by having the hero and the princess be one and the same. Barbie’s motivation isn’t to save herself, but rather to save a land she visits in a dream. This broadens what a hero can be. Gaiman shows that a hero doesn’t have to be a knight in shining armor, but can be a princess in a dress.

The journey is full of despair and death, creating a hostile place for everyone on the journey. Campbell would describe this as “The Road of Trials.” Barbie and her group travel through dangerous woods, icy cold mountaintops, and hide from the Cuckoo’s army. Every hero faces a set of trials that they have to overcome in order to defeat the villain. Barbie does this as well. Instead of having a brave, masculine character, though, the reader is following a woman who takes the appearance of a princess. 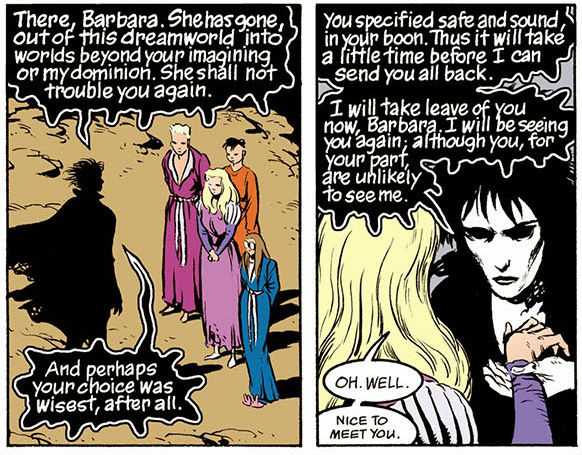 READ: Interested in SANDMAN? Take a look at our analysis of SANDMAN: DREAM COUNTRY!

When Barbie destroys the Hierogram and the Porpentine, she receives a boon from Morpheus. Her only request is that she and her friends make it back to New York City safely. Morpheus agrees. When Barbie returns, she’s no longer happy with the life she led before. She doesn’t find New York City to be her home. She ends up traveling the country, stating that her home is a state of mind rather than a place. Most heroes after their journey no longer feel that their home is really home anymore. They will often leave the place they considered home and continuously search for somewhere new. Barbie’s return home shows how she has changed and grown as a person through this experience. Her home is no longer big enough to hold her thoughts and ideas, and she searches for a new place to be.

The Hero’s Journey Always has an End

What makes this hero’s journey unique is that the story follows a female character. Most heroes’ adventures depict men overcoming obstacles and embarking on outrageous quests. Gaiman provides readers with a different perspective by telling the fantasy adventure of a young woman who has a wide set of interests. Barbie is a princess as well as an expressive outcast. She paints herself differently every day, putting on a new persona and becoming whomever she decides to be.

It’s important that women also have soul-finding adventures. Barbie is a character who’s constantly facing harassment from strangers in regards to the way she looks and dresses. Through these experiences, Barbie is constantly standing by what she does. She doesn’t conform to any sort of social construct, but rather finds ways to break them. Gaiman also breaks social constructs. He depicts how a princess can also be a hero. It’s an important reminder for everyone that a hero doesn’t always wear armor.