Take one part Akira Kurosawa, one part Sergio Leone, a dash of futuristic sci-fi, and blend it all together under the creative eye of one the best animators of our time. That’s your recipe for SAMURAI JACK. Created by animator Genndy Tartakovsky in 2001, SAMURAI JACK looks and feels to this day unlike anything in western animation. The series ran until 2004 and in that time the show put its title character through a series of increasingly impossible challenges in his desperate attempt to return to the past and defeat the evil wizard Aku who ravaged his homeland and conquered the world.

Every episode of SAMURAI JACK is a work of art onto itself. The animators of the series gave the show a unique look. Rather than thick, clearly drawn border lines on the characters and the backgrounds, the characters are drawn without outlines, creating impressionistic geometric shapes that move freely through the action.

Since the drawings have no outlines, the series used bright colors to clearly define the interaction between character and background. The show also evokes classic samurai and western cinema through its use of action to tell the story. Using little to no dialogue, many episodes were written by the animators as they were drawing out the storyboards rather than using pre-written scripts.

For SAMURAI JACK, the action is the story. Unfortunately, the series ended in 2004 before Jack could be given a proper ending to his story. Luckily, Adult Swim is reviving the series for one final season. Here are the episodes that best express SAMURAI JACK’s creative mandate of visual action as a story, which any fan should rewatch before Jack comes back for his final season this weekend.

Episode I: The Beginning 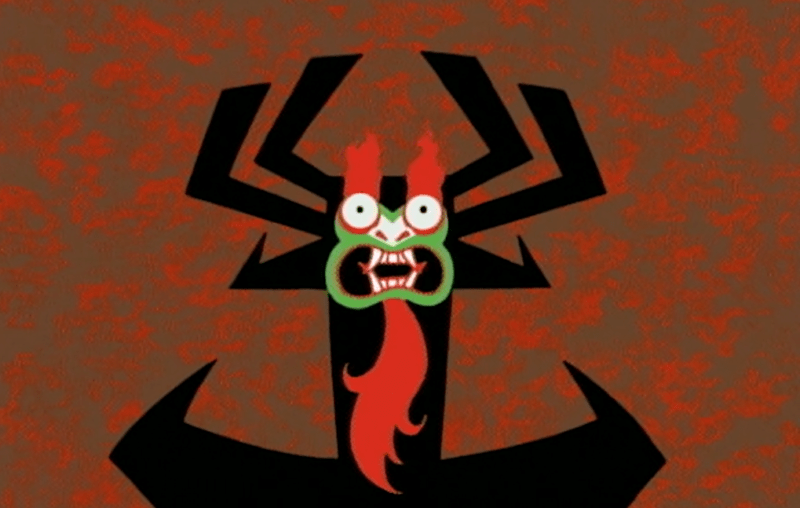 Of course, the first episode had to be mentioned, but I want to discuss a specific moment in this episode that establishes the power of SAMURAI JACK’s visual storytelling. I remember first sitting down to watch SAMURAI JACK as a kid. The show started and the first images of the series played out before my eyes. A tall black monolith against a red sky exploded out of the ground. No fanfare. Just a cacophonous explosion. The monolith turns slowly. A small flame, followed by a long, green, snake-like mouth turn around. Then the eyes open. Those bulbous eyes with beady pupils under flaming eyebrows. This was my first look at Aku, and his frozen Oni mask face unsettled my pre-pubescent mind. I was hooked before he even spoke.

The episode itself beautifully sets up the series to come. As a boy, Jack listens to his father recount the tale of how he initially defeated Aku and trapped him away forever. The tale is interrupted by the resurgence of the evil wizard. As his father is killed, Jack is sent away to train and prepare for the battle against Aku with his father’s magic sword in hand.

The tale is a simple one, but the animation style beautifully realizes the ancient lands of Jack’s home and the training montage that follows Jack from youth to adulthood. Jack’s journey brings to mind Bruce Wayne’s international training to avenge his family’s death, but it also reveals the myriad of cultural influences that will play into future SAMURAI JACK episodes.

Episode XXV: Jack and the Spartans

Do you like Frank Miller’s 300 but always found yourself thinking, “This story would be better with 100% more robots?” Then the episode “Jack and the Spartans” are for you. Frank Miller’s comic RONIN clearly has its fingerprints all over the creative inspiration for SAMURAI JACK, so it is only appropriate that Genndy Tartakovsky and his team would pay homage to Miller’s tale of the 300 Spartans who faced impossible odds against an impossibly huge army.

In this version, Jack helps the Spartans against a legion of Minotaur robots led by a Cthulhu-like mechanical master. True to form for the series, Jack and the Spartans rush through the robotic forces that threaten the homeland of the Spartans. The show’s widescreen format allows the frames of each fight sequence to be filled with sliced robots and flying sparks as metal clashes against metal. Some of SAMURAI JACK’s best sequences involve our hero mowing down hordes of robot adversaries, but it is this episode that delivers the coolest giant battle scenes in the series. 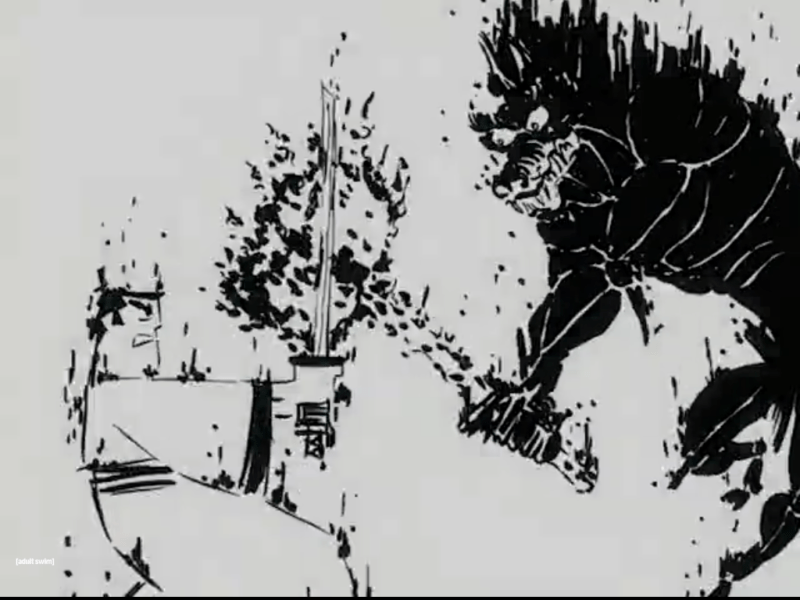 SAMURAI JACK dipped its toes into a lot of genres, but it didn’t spend too much time with horror. One of the few times it did ended up becoming this phenomenal, fever-dream of an episode. Episode XXXV contains one of the most impressive animated sequences of the entire series. Jack stumbles across an abandoned home with a traditional Japanese structure. In searching the home, Jack discovers that a horrifying demon has taken possession of the house and its inhabitants.

What follows is a series of hallucinatory sequences with Jack seeing flashbacks to the family of the house getting possessed. No exposition about the demon or what occurred to the family is given but none is needed. The ambiguity of what is happening makes the visuals all the more haunting, culminating in Jack being taken by the demon.

The demon’s dimension looks like an ink wash painting from Hell. The demon and Jack are drawn with outlines that shake like a Richter scale creating a constant movement that gives everything an otherworldly quality and amplifies the terror of the demon that Jack must face. It is a visually stunning moment in a series built on visually stunning moments.

Episode XXXVII and XXXVIII: The Birth of Evil 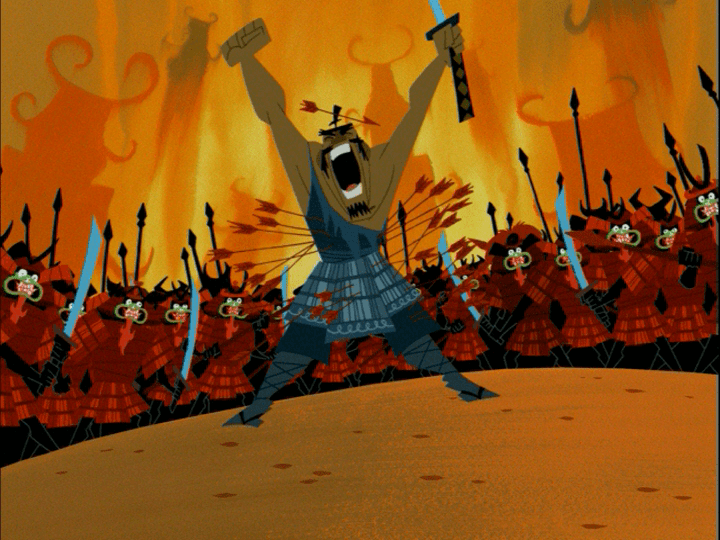 Rarely ever do prequels live up to audience expectations, but as with many things, SAMURAI JACK turns those expectations on their heads with “The Birth of Evil.” This episode expands on the story Jack’s father told him way back in episode one and provides further clues about the origin of Aku.

Once again, the animators behind SAMURAI JACK tell a story using only sound and visuals. The first part of this two-part episode is nearly dialogue-free, but it still manages to convey the terrifying origins of Aku. It’s hard to select only one sequence from this two-parter to highlight. The opening scene with the pantheon of gods hunting Aku’s original form, Jack’s father and his troops being picked off one by one as Aku explodes out of the Earth, the sickening cracks like horrible trees as Aku is “born” into his full form for the first time, or the battle between Jack’s father and hundreds of Aku duplicates could all be classified as the greatest moment of these episodes.

However, the strength of these episodes is how it succeeds where many prequels fail. It reveals interesting details about previously understood events rather than trying to add in needless twists. It doesn’t attempt to reinvent the mythology of SAMURAI JACK, but it does enhance it. The episodes also show how confident the animators have become since the first season. This story of Aku’s origins could only have been told at its best once the animators became masters of storytelling in this world with little to no dialogue. 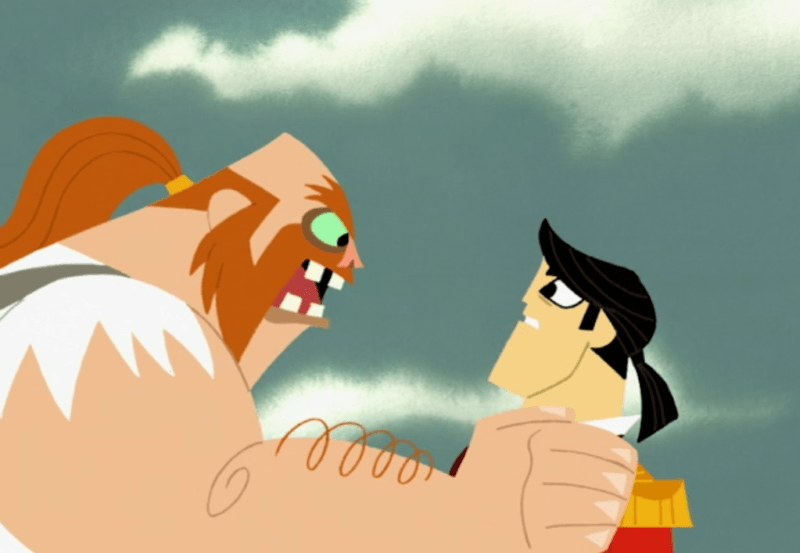 I’m cheating a bit here, but it’s impossible to pick just one Scotsman episode as the best. The character of the Scotsman (voiced by none other than Bender and Jake the Dog himself, John DiMaggio) perfectly represents the off-beat sense of humor of SAMURAI JACK. While the show always presented its content seriously, it could at times be wickedly funny. With his cartoonish stature and insults, as well as his machine gun leg, the Scotsman provided SAMURAI JACK with three of its most action-packed and irreverent episodes.

Typically, Jack plays the straight man to all the bluster of the Scotsman. In this two-parter, however, the Scotsman stumbles upon an amnesiac Jack who inexplicably speaks with a Keanu Reeves, surfer-bro accent. What follows is an absolute romp of an episode with more STAR WARS references then you can shake a lightsaber at.  If you want the best of comedy that SAMURAI JACK has to offer, these are the episodes to seek out.

Episode XLIV: The Princess and the Bounty Hunters 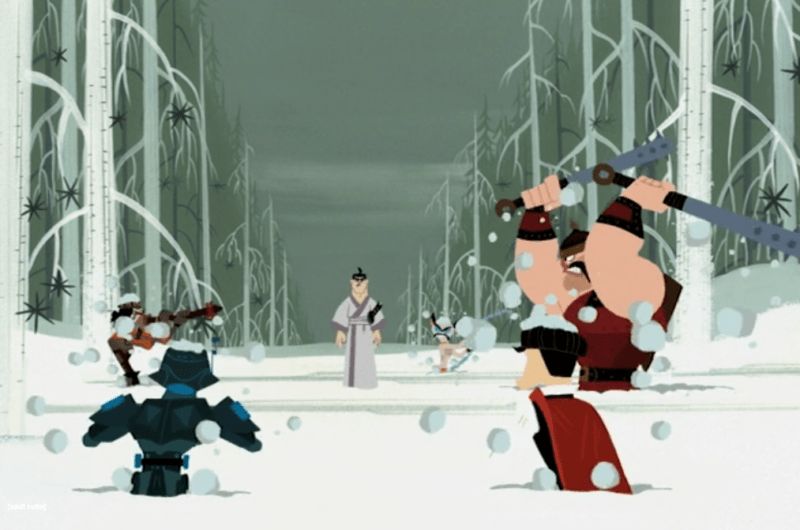 Part of what makes SAMURAI JACK such an innovative and exciting series is the eclectic world building. By having the show take place in the future warped by Aku’s sorcery, it allowed the creators to make the world of the series a glorious mishmash of technology and global cultures. The episode “The Princess and the Bounty Hunters” takes advantage of this in an episode that blends THE CANTERBURY TALES with the BATMAN: THE ANIMATED SERIES episode “Almost Got ‘Im.”

A group of bounty hunters (a Southern gentleman, a Russian brute, a pair of cat-human hybrids, an aboriginal hunter, and a mysterious woman clad in a robotic suit), all converge on a snowed-in hut with the same goal: kill Samurai Jack.

Here the animators use visual storytelling to characterize each of the bounty hunters. As each of them shares their plan for taking out the samurai, the animation style switches to fit the culture the hunter is inspired by. The show switches from aboriginal art to traditional Chinese painting, to a silent film, to a crude crayon drawing, providing the audience with a new visual treat for an already visually stunning series. Typically, the bounty hunters that Jack squares off with are one-dimensional characters, but this episode provides a unique amount of pathos for these one-off antagonists as the story reaches its inevitable conclusion. This episode perfectly captures the anything-goes spirit that made the world of SAMURAI JACK such a rich and creative one. 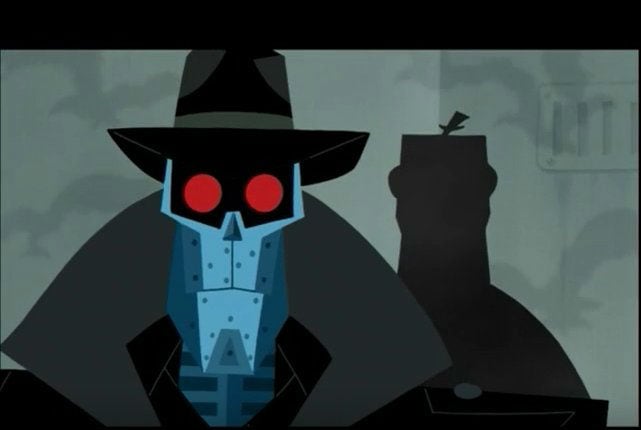 Samurai, Cowboy, Gangster: These archetypes have existed in connection with each other throughout pop culture. Together they form a pyramid honor, a code existing outside the law of civilized society. While these stock characters are separated by time and countries, their characteristics are so similar that stories about one can be adapted into a story about the other. Kurosawa’s YOJIMBO became Leone’s A FISTFUL OF DOLLARS which became, in part, the Coen brothers’ MILLER’S CROSSING. Even Jean-Pierre Melville’s tale of a French gangster is entitled LE SAMOURAI. It’s only fitting that SAMURAI JACK encountered the gangster archetype, too.

The X-9 of the title is a retired hit man/robot forced by Aku into one last job: take out Samurai Jack. If he can accomplish this, he’ll be allowed to live in peace with his beloved dog Lulu. The episode hits all of the classic marks of the film noir gangster story — the narration, the seemingly endless rain, the shadows and jazz — but it also reinforces the similarities in the samurai and gangster archetypes. Much like Jack, X-9 follows a strict code of honor and acts to protect the innocent. He is tortured by his quest, but he knows he must fulfill it regardless.

The episode is particularly effective because of the new light it casts on the anonymous hordes of robotic enemies Jack has slain over the series. It’s especially bold for this story to be told as the third-to-last episode of the original series. Did all of the baddies Jack struck down over the last 50 episodes also have rich, inner lives? Seeing Jack outside the context of the hero to force us to question his actions makes this episode one of the standouts of the series.

Gotta Get Back, Back to the Past

With Jack’s return this weekend, it remains to be seen how the new episodes will stack up against these classics of the original series. Many of the recent TV revivals that have popped up over the last few years have been at best underwhelming and at worst incredibly disappointing. However, if the animators continue to allow their stunning visuals to drive the action of the series, SAMURAI JACK’s reputation as one of the best animated shows of all time will remain as untarnished as his magic sword.