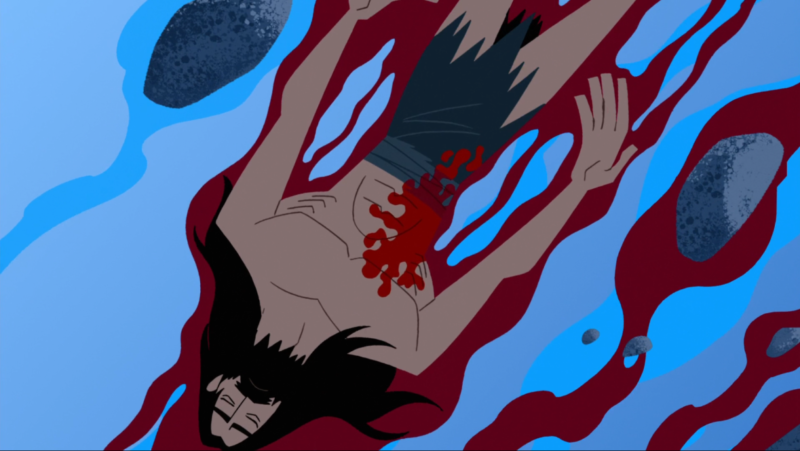 All it took was the swing of a blade and a few drops of blood to fundamentally change SAMURAI JACK.

The series SAMURAI JACK follows the titular character in his quest to defeat the evil wizard Aku and return from the future to his own time in feudal Japan. Under the directorial and creative eye of Genndy Tartakovsky, SAMURAI JACK ran for four all too brief but incredible seasons from 2001 to 2004 on Cartoon Network. The show established itself as one of the most visually inventive American animated series to ever air on television. Its cancellation left fans with no clear answers as to how Jack’s journey ended.

Now, after more than a decade, the show has returned on the Adult Swim programming block, giving the series’ creative team more freedom to amplify the action in a new, more violent direction than they could have in the all-ages version of the series. The series has grown-up with its audience, and in doing so, the creative team has used more mature storytelling to explore the final season’s theme: the futility of violence. 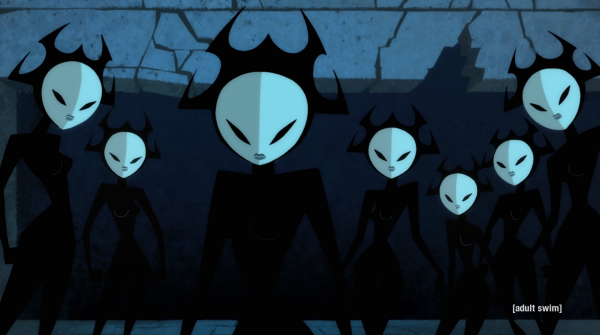 Mission Aborted: The Futility of Violence

For most viewers, it has been over ten years since we last saw our hero, but for Jack, 50 years have passed. Seeing a childhood hero looking so defeated and weary gives this season a feeling of nostalgic tragedy. Jack is weighed down by the ravages of time, the Sisyphean nature of his mission, and the loss of his magic sword, the one weapon that could defeat Aku. This loss is not only the loss of a tool for victory, but the loss of a connection to the family and culture he left behind. The loss of his sword is the loss of his hope. This new status quo for Jack makes his once romantic tale of adventure into a cynical and futile goose chase.

When we return to Jack, he is no longer the confident warrior from a decade ago. He is insecure and fights that would have taken him mere moments in the past are now dragged out affairs without his trusted blade. It is in this state that Jack finds himself confronted by the Daughters of Aku, a group of seven assassins trained from birth to accomplish one task: kill Samurai Jack.

On a meta level, this is a fundamental shift in the story structure of SAMURAI JACK. More or less all of Jack’s enemies in the past episodes were robotic, due to the strict all-ages guidelines that were imposed on the show, so this marks the first time in the series where Jack’s enemies are explicitly human.

CLICK: Wanna know the best episodes of SAMURAI JACK? “Best” is subjective. Your search is folly. Here are some we really like though!

When he is attacked by the Daughters of Aku, Jack assumes he can overcome his attackers because they are only machines. Jack’s crusade up to this point has been about the triumph of humanity and spirituality over the industrial machine. When he learns the daughters are actually human beings, he feels conflicted and terrified; his humanity is what separated him from his enemies, and without it, his victory is no longer assured or wholly just. When Jack actually kills one of the Daughters, he feels the burden of guilt for taking a human life (though there has been some debate over that, the show’s creators have made this canonical in interviews). For the first time, Jack has to grapple with real consequences of his violent actions. Slicing and dicing his way through hordes of machines never phased him before, but now the idea of actually killing a flesh-and-blood human is a weight that seems too great for his already weary spirit.

Jack’s guilt and existential angst over his violent actions are personified as a twisted hallucination of his younger self that mocks his efforts to keep fighting. It implores him to end his life rather than live an endless eternity against overwhelming odds. 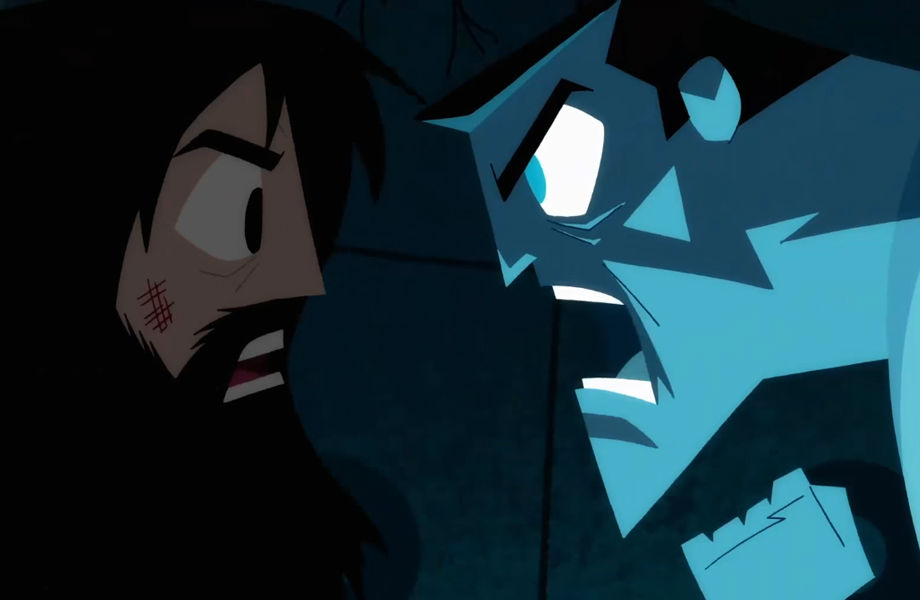 A Samurai Reborn: The Past is Never in the Past

But the Daughters have the youthful passion for their quest to slay Jack, a youthful passion that Jack once had. Ironically, it is their crusade to kill Jack that inspires Jack to fight again. By opposing him with a violent enthusiasm that he had never encountered before, they forced Jack to rediscover his warrior ways. And so the cycle of violence to continues.

Jack’s existential crisis finally passes when he reflects on a traumatic experience as a child where he watched his father strike down a group of bandits. As Jack watched, a streak of blood from the attackers splashed across his face. As his father calms a young Jack down, he tells him “[t]he decisions you make and the actions that follow are a reflection of who you are. You cannot hide from yourself.” For Jack, the Daughters are his warrior past in physical form, the past that he cannot hide from. After remembering these words from his past, Jack accepts his role as a warrior and resolves to defeat the Daughters of Aku.

Tartakovsky presents us with an interesting question: did Jack ever truly have a choice or is he as much a victim of fate as the Daughters of Aku? When Aku returned, he destroyed Jack’s homeland and his father’s kingdom. His father’s emergency plan in case of Aku’s return was to send Jack around the world to train with the greatest fighters from many cultures until he was old enough, and skilled enough, to return and vanquish Aku. Jack’s life and the life of the Daughters of Aku is nearly identical: both were taken from childhood and lived their entire lives solely in preparation for a final battle with one enemy. Jack’s relentless crusade has made the escalation of violence inevitable and inescapable.

CLICK: Missing AVATAR: THE LAST AIRBENDER? We all are. Here are some great comics to help you cope.

In his final confrontation with the Daughters, Jack offers the Daughters the choice to give up the path of violence and turn from the fight, the choice neither the Daughters nor Jack have ever been given. When they choose to fight on, he defeats them one by one. The fight ends with Jack holding one of the Daughters, Ashi, over a cliff. Ashi rants and raves at Jack with bloodthirsty promises of vengeance. Jack coldly, and somewhat comically, drops Ashi over the cliff, seemingly to her death.

While there is certainly humor in this moment, there is a hint of tragedy as well. Though she is human, she too has been programmed like the mechanical monstrosities that Jack has turned to scraps throughout the series. Ashi is presented to the audience as Jack’s opposite. Just as Tartakovsky showed us Jack’s childhood of privilege suddenly shaken by the violent reality of the world, he also shows us Ashi’s inverse experience: her violent childhood is dramatically changed by a moment of tranquility.

While training with the Daughters of Aku as a girl, Ashi sees a beetle fly in through a crack in her mountain home. She peeks through the crack and sees the sunshine and the beauty of the natural world for the first time. The mother of the Daughters tells Ashi that all of this beauty is thanks to Aku, further indoctrinating her to Aku’s cause. However, Ashi is the only one of her sisters who has actually glimpsed the outside world before they are old enough to challenge Jack in combat. That awareness of the world, that acknowledgement of simply the concept of beauty, is what gives her the ability to break free from the path that was forced upon her. 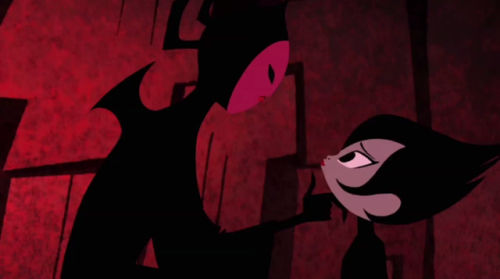 Destiny: By Design or By Choice?

After plummeting from the top of a cliff, Jack finds Ashi still alive, but still fueled by her quest for vengeance. Jack sees that she has been brainwashed by the doctrine of the Daughters of Aku and wants to save her. He even blames himself for her state. If he had never started his war against Aku, she would not have been turned into a weapon. His violent actions only led to more violent reactions. As they struggle to survive being swallowed whole by a massive underground worm, Jack tries to bond with Ashi while Ashi keeps trying to murder Jack; both of these tactics fail miserably. Jack keeps Ashi bound to his back and climbs through the digestive system of the giant worm to finally escape.

It is here we reach the halfway point of Jack’s final adventures, with two enemies at an impasse. Jack manages to free them from the maw of the monster, but Ashi still seeks her vengeance. With her weapon drawn, she tries to sneak up on Jack, but she is distracted. On the tiny island where they have found themselves, she sees beetles, the same type of beetle that first showed her the true beauty of the world when she was a girl. As she watches them dance through the sky, one lands on Jack’s hand. Ashi watches as Jack lets it crawl across his finger tips. She drops her weapon, realizing that if Jack can appreciate the beauty and grace of the world as she does, then he cannot be the evil she believed him to be.

SAMURAI JACK has returned a far different show than it was when it left. It has become more mature and more violent, but it has acknowledged that not every battle can or even should be won with force and weapons. SAMURAI JACK is one of the best action shows on television, and, in the first half of season 5, demonstrated the futility of violence in the most elegant way possible: Jack won the battle for Ashi’s soul because he did not draw his sword. However, this is only one battle. There is still the war with Aku to be won. For now at least, Jack seems to have broken the cycle of violence, but as the audience has seen, Jack’s might may not be enough to defeat the greatest evil of all.

Watch the newest season of SAMURAI JACK on Saturdays at 11:00 PM, only on Adult Swim.