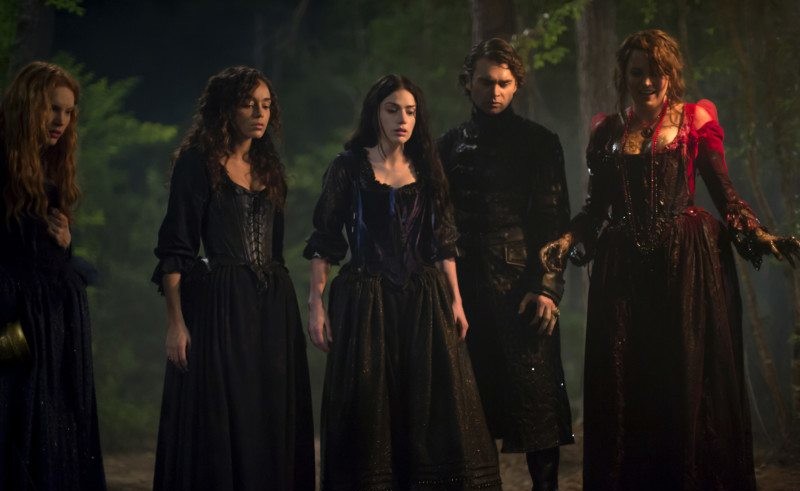 SALEM is one of the wickedest shows on television. Yes, witches have been an interest of American culture for a time, but SALEM inverts this concept by making the humanity of these witches the spotlight. To look at the witches of SALEM is to look at the face of the oppressed in colonial America and how they reclaim their independence and their retribution. Every witch’s motivation is to get revenge on the world that hurt them by removing power from the same people who oppressed them. But, the show also poses a universal question to this task: at what cost? In SALEM, the oppressed are not just seeking their justice, but also do so while blackening their souls with inhumane acts against humanity itself, rather than simply their oppressors.

Whereas SALEM’s witches seem to grow evil from innocent men and women, the Puritans and other mundane characters seem to be steeped in evil from the power they inherited from society’s patriarchy. The show seems to be making an almost precautionary statement to the oppressed and undermined: that revenge is the first step into the same corruption that drove your oppressors to commit evil unto you. This sentiment is all the more poignant because the showrunners never remove sympathy for these characters, even as you question their actions.

INTEREST: Click here for a look at how we compare the new BLAIR WITCH movie with its infamous predecessor, THE BLAIR WITCH PROJECT!

Of the witches serving the role of villain in the SALEM mythos, few are more dangerous than Tituba. And even fewer have experienced the tragedies that Tituba has. In the episode “The House of Pain,” we learn of Tituba’s ancestry as a member of the Arawak tribe. She was violently ripped from her homeland in a South American village and sold into slavery. Tituba would watch her mother and sisters be repeatedly raped—and it’s implied she too would’ve been raped if she hadn’t been a child. She witnessed the hypocrisy of the Puritans by the savage cruelty they inflicted upon her all while thumping the Christian Bible.

Tituba’s history causes her to eventually seek justice against the Puritans by wiping them out. She learns witchcraft to survive the cruel white man’s world and navigate the cold abuse of everyone around her. Yet, Tituba’s story takes on the tone of a villain. She is taken to Increase Mather’s House of Pain, where she is tortured for a day. The torture is framed as retribution for her hand in killing numerous “innocents” in the town throughout the course of the Witch Trials. While in most narratives such a scene of chilling humanity would serve to soften the character, Tituba reasserts her zealotry to the witches’ plan by framing Mary Sibley’s lover, John Alden, for witchcraft.

The narrative is not sympathetic to her plight. In fact, with more and more revelations being brought to the table—including her abduction and planned ritual sacrifice of Mary Sibley’s son—Tituba digs herself a bigger hole. By the end of season 2, Tituba’s fate is unforgiving: She is mauled by a flock of magpies who peck out both of her eyes.

CLICK: SALEM, like most series, has a fandom and fanfiction. But, what is the power of fanfiction today?

Tituba’s storyline is vital to the origins of America, which is a recurring plot point in SALEM. By painting her in a foreboding light, SALEM makes a statement about how retribution should be gained: with kid gloves rather than iron gauntlets. While Tituba’s magic makes her a dangerous antagonist, she is still a slave throughout the story. Her freedom is never assured, and in the end, she is essentially a runaway slave. Therefore, her insurrection against the Puritans of Salem can be seen in a similar light as slave revolts and revolutions—a widespread act of chaos to disenfranchise the people in power. The narrative, however, treats this behavior as toxic, even antisocial, and becomes almost like an afterschool special when discussing and condemning the morality of all of Tituba’s actions for freedom.

As stated earlier, few witches know the pain Tituba has experienced. Among those few is the witch known as Countess Marburg. Her character is painted in hedonistic extravagance and diabolical malice. She is ruthless in her endeavors, willing to sacrifice her own children thousands of times over for even the chance of seeing her plans come to fruition. She openly disdains her son for being a man, while also disdaining any witches who aren’t one of her “true witches.”

However, there are moments in Marburg’s story that illustrate the tragedy associated with her immortality. She speaks of the burning flesh of those she has loved as they were hunted by the inquisition and untold horrors that she has had to endure since the early days of civilization in her pursuit to reunite with her one love. Marburg, in fact, represents everything any bitterly sympathetic character could become: a monster of necessity. It’s not that Marburg was born incapable of feeling for people; it’s that she has learned to turn herself cold enough to do everything she must in order to remain “strong.”

Marburg’s case seems to reflect the ideas of feminism that have grown corrupt. While her approach is clearly flawed, her comments seem to be akin to colonial gender politics. She speaks of men as near barbaric entities who maim, kill, and live their lives with their hearts—and worse, secrets—on their sleeves. She speaks of her son, with whom she shares a disturbingly close relationship, as if he is little more than a useful pawn and finds his gender repugnant. She addresses the world in non-binaries, rejecting the monotheistic beliefs of one god, of one love even, in favor of the multi-faceted pleasures in the world. She regards all women in higher regard, even looking to the original woman, Eve, as the “first and best of women,” paying her praise by idealizing her with the serpent as the symbol of femininity. She views this serpent as a means of liberation, the serpent which bestowed knowledge rather than withdrawing and hiding it. The feminism of Marburg’s character isn’t highlighted by a sense of equality, but her resentment towards all men for the constant oppression of a society that would regard women as the weaker, vulnerable sex. Marburg’s theme of corrupted feminism is all dependent on her past as a slave to her own gender, and resentment to the societies that forced her into said shackles.

INTEREST: Serial killers have perplexed humanity for years. Click here as we explore what makes these modern monsters so fascinating!

SALEM doesn’t just target the slaves in their condemnation of the oppressed who wander too far out of the path of order. Mercy Lewis, an innocent victim turned into chaotic, uncontrollable villain, is also one of the more corrupt witches in the show. Mercy Lewis began her story as the instrument for the witches to begin their apocalypse, but after recognizing her pain, Mary Sibley indoctrinates her into witchcraft. And everything goes downhill from there.

Mercy becomes vindictive in her service to Mary Sibley. Though as a witch Mercy does take the oppressed and abused of the town of Salem under her care, even this sours over time. Mercy’s rivalry with her former teacher and caretaker corrupts her. She soon begins to abuse and sacrifice the oppressed she promised to protect. They become her pawns in her game against Mary Sibley.

Mercy Lewis’ corruption is reinforced in the second season. Following her exile from the town of Salem, Mercy began to use magic to castrate the men of Salem and replace them with her crow familiars. These acts of sexual violence seem to create a direct correlation with Mercy’s own abuse. The narrative understands this and turns the act into a means of justice, as later in the season she is inevitably incinerated and converted into a disposable pawn for Countess Marburg and her son. Though, in the end, Mercy reveals her extended goals to become royalty and to live out her childhood fantasy both in a family that loves her and with wealth that she never experienced as a child.

The overall themes of the show are summarized by Tituba’s monologue as she was tortured by the enigmatic witch hunter, Increase Mather:

“He draws to him all who hurt, all who hide, all who hate, all who thirst for justice. Gathers us into the circle and promises us a leader.”

At the time, the infamous “he” isn’t explicitly stated to be the devil. In fact, the narrative seemed to point to the idea that the Christian Devil might not be an actual entity, simply a spirit that Christianity was taught to fear that represented the Wild and all things different that the Puritans feared. But, as the season wound on, we learn that this is not the case. This Kanima, as he is sometimes called, is the bonafide devil. It speaks to how corruption and all roads to hell are paved with good intentions. The idea of justice is putrefied, corrupted by the oppression and pain these people faced. They made all Puritans their enemies, but in doing so they disassociated the Puritans from the idea of what it means to be human and thus believed any act of retribution to be just. They themselves became less than their old selves.

The characters of SALEM are often painted to be sympathetic in their backstories. Many times we see witches trudge up their tragic past in eloquent monologues or in the subtext of a longing glance or action. From Marburg’s dedication to the Devil’s agenda to Tituba’s obsession with Mary Sibley to Mercy’s dream of royalty, we see characters express an interest in unshackling themselves from the oppressive world around them. However, it is the means by which these characters pursue their liberation that we are meant to find repulsive, and in that we find a higher message, a message that the line between humanity and monstrosity is in the choices we choose to make in fighting the evils of the world. The message is that fighting evil is about looking at the humanity in the evil acts and remembering that we are meant to always treat our enemies as equals, lest the light that they tried to squash out of us becomes a blight.