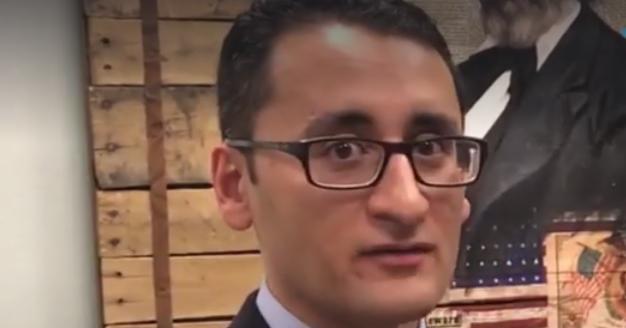 Saif Alnasseri was born in Iraq in 1978, just before the war with Iran. As he grew up, he experienced two more wars, one as a child and another as an adult. In between, Saif developed an interest that would stay with him throughout his life: comic books. His childhood ritual was taking a trip to the local bookstore at the beginning of each week and picking up the newest issues. As time progressed, that became more difficult as the government stopped making comics focused its attention on propaganda instead. Saif’s love of comics and his feelings of disappointment ultimately motivated him to take up a friend’s offer to work with the LA TIMES, first as an interpreter, then as a journalist, and then immigrate to the United States. Saif now lives in New Jersey, with his wife and daughters.

ComicsVerse: How did your interest in comics begin?

Saif Alnasseri: I had relatives in Lebanon that had old comics I was able to look through. They were really interesting to me, even though they weren’t new comics.  Eventually, I was able to get newer books from a bookstore.  SUPERMAN was the first real comic I ever really picked up.

SA: Well, the new books came on Saturday because that’s the first day of the Iraqi work week.  The books were put together each week in one big edition, and the distribution was scattered at first — they wouldn’t come in order from week to week, but that got better.  The comics were also distributed by the Ministry of Culture and Information — they controlled the magazines in the country.  There were some changes — the comics were changed from the Lebanon translation, and, for some reason, they gave Superman a mustache and changed his logo to the Arabic word for ‘super.’  But the content wasn’t really touched.  It was part of the attempt to move the country forward after the war [Iraq vs. Iran, which began in 1979 and lasted until 1988].

CV: What comics meant the most to you?

SA: I enjoyed SUPERMAN and the FLASH, but BATMAN was my favorite.  I loved that he had no powers and that his stories were more realistic, with mystery elements.

CV: Was Batman being realistic more attractive since conditions in Iraq were so difficult?  As if it was easier to be Batman? 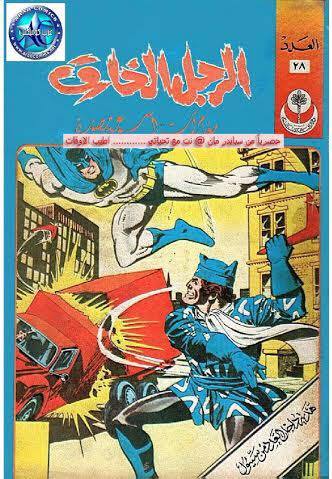 CV: Did the war affect how comics were made?

SA: Absolutely.  When the war started, the Ministry cut off production of comics so they could make more propaganda. I remember going to my bookstore like every week and being told they didn’t have any new books.  My father and I went to other stores before someone told us what had happened.  I still feel that sadness and disappointment.

CV: Were you able to find anything as the war went on?

SA: I started to go to bookstores to find old issues — ones that had been resold or used. My parents and family helped as much as they could — my parents gave money and my relatives sent me old comics from Lebanon from the 60s and 70s.  I was also lucky because a state-controlled theater was able to show the [1989] BATMAN movie. But I still missed the ritual of going each week.

CV: Do you think it influenced your later feelings about the government?

SA: Not directly, but I still remember being angry — I didn’t care about the war, I wanted my comics.  My parents also questioned a lot of things going on with the government.  We had believed [Iraqi President] Saddam Hussein was such a great leader and we were told the war was going well.  But we all knew it wasn’t, even though we couldn’t talk about it openly. All of that changed my view on the government.

Saif studied to be a pharmacist and was running his own pharmacy in 2001 when America invaded his home country.

SA: At the time, I had two jobs — the government paid for education if you worked part time for them afterwards.  So I would work for them in the morning and ran my pharmacy at night. I wanted to know what was going on with the war, and a friend of mine was working with the LA TIMES.  He told me they needed a translator, and since I went to an English-speaking high school [Baghdad College], I was able to help reporters get their information. The difficulty increased drastically in 2004; the TIMES actually started training us to be journalists because of it. We really wanted to show things accurately and I feel some of our stories helped change American policy.

Saif’s work with the TIMES allowed him to apply for a special visa to bring his family to America in December 2008. He went to school to obtain an American pharmacy degree while working, but his newly granted access to comics was always on his mind.

SA: I really couldn’t get into anything because I was so busy, but I would pass comic stores and want to go. Eventually, things stabilized a bit, and I was able to go with my daughter to a local store. But it was so different!  The stories were about people I didn’t recognize or were so different that I felt overwhelmed.  But I found people who guided me towards the right books and I was able to get into it again.  Plus, the TV shows (FLASH, SUPERGIRL) started around the same time.

CV: You mentioned taking your daughter with you.  Does she share your interest?

SA: Yes! We have a lot of the same tastes, so we read a lot together. She borrows comics from her school and we watch the shows together.  It’s bonding time for us.

READ: See why the FLASH is so beloved as we track the evolution of one of its heroes.

CV: Comics are also becoming much more diverse and open. Marvel alone has debuted, to great acclaim, a teenage Muslim Ms. Marvel, an Asian Hulk, a black/latino Spiderman, a black Captain America, a female Thor, and a gay Latina dressed in the American flag. How do you feel seeing that not only as an immigrant but knowing that your child is seeing this as well?

SA: The openness of comics now is really amazing. I feel that the books are really giving great messages for everyone — about being a good citizen, a good American. I feel it really reflects the values I feel are important.

Booker then invited Saif, as a guest, to see Trump’s first speech to Congress.

SA: There were a lot of conflicting emotions on that day. It’s a great honor, but knowing that I was going to see a President I didn’t agree with speak did lower the excitement for me. At the same time, I felt it was important that I go and show my opposition, to speak out. In Iraq, I wasn’t able to do that, and in America, it’s so important that we speak out, do something when we don’t agree with the government because we have the freedom to. It made the experience more important, and my story helped add important details to the debate.

CV: You mentioned the lack of freedoms in Iraq growing up. Do you think having the open availability to comics and other media there would have benefited the people back then?

SA: They would have absolutely benefited from it. Iraq could truly grow from more availability and openness. It would let people learn more, and form their own opinions.

CV: Let’s end on a lighter note. What are you hoping to see in the remainder of the seasons for SUPERGIRL and FLASH?

SA: I don’t try to predict anything — I don’t even like spoilers. I just like to watch the story unfold and be surprised along the way.