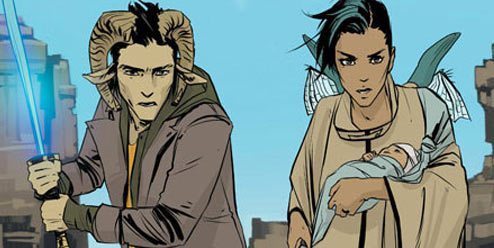 If you’ve been hooked on the epic space opera SAGA for the last four years, you’re beyond familiar with the twist and turns it’s taken in each issue. Within all the intergalactic shootouts and games of cat and mouse throughout the galaxy, we’ve had the opportunity to take the journey with our main protagonist, Hazel, and her parents, Marko and Alana.

One of the recurring themes Brian K. Vaughan places an emphasis on is how influential this family’s adventure is to other parties involved, and also how it affects their own relationship. Vaughan is able to show us a full spectrum of romantic relationships in the series that mimic what we see in our own reality. Making relationships the focal point for most of the supporting cast gives us insight to our characters and what drives them in the story. Because of this, SAGA thrives in creating a relatable tale for readers and excels in pushing the envelope.

The Taboos Still Behind “Interracial” Dating

The couple that readers grow closest to is Marko and Alana, the parents to our protagonist, Hazel. Alana is a soldier from the planet Landfall, joining the war against Wreathers. Marko is from the planet Wreath, and he meets Alana, while held captive as a prisoner. During his captivity, the two develop a budding relationship that flourishes into something romantic and immoral in their universe. That’s how we are introduced to Hazel, the result of an interracial relationship in this series, and a shock to everyone who learns of her existence. The couple face problems relatable to many that differ in race or religion from their partners, which in our society there is a stigma of involvement in marriage to someone outside your own culture.

The parents find attraction to one another based on simple things like their personalities, physical attributes, morals, and character. The push from their own parents to marry and create a family within their own race is a familiar idea to anyone that faces the same force stemming from older ideology. Our generation lives in a world where most of those older practices are respected, but not pursued in relation to dating. Coming from my own experiences and involvement in relationships that can be labeled “interracial,” the pursuit of happiness comes hand-in-hand with tradition from family to some extent.

Because of Hazel, the families of both parents are forced to get along for her sake. But how can a family made up of Landfallians and Wreathers work out when their planets are already at war? Marko’s father is accepting of the relationship between the lovers, but his wife Klara was a warrior in her youth and originally can’t see past her experience fighting against Landfall in the past. Eventually, Klara learns to accept Alana and Hazel later in the story and assist in protecting their family.

Even though the relationship makes sense to the two lovers and wins over Marko’s parents, the galaxy’s judgment and opinion against it remains. The many years spent in the war create tension and anger for many in the supporting cast and encourage the galaxy to tear this family apart. Alana and Marko find inspiration earlier in the relationship from the book “A Nighttime Smoke” by D. Oswald Heist, which secretes an anti-war message to readers. One of the quotes Alana refers back to is “There are two kinds of people in this world. Consumers and destroyers. We used to have consumers, but they all ran away.” The book’s message is enough to guide the lovers and their child to run away in pursuit of a new life, far from the war and society’s disapproval.

It seems like attempting to prove everyone wrong and survive is all Marko and Alana can do. The heartbreaking thing about all this is, sharing a bond and child with someone presents a lot of challenges. Protecting a child and trying to carry on while everyone in the universe is trying to hunt your family down is more than taxing enough on this relationship, and leads them to question the worth of their happiness in the end.

READ: Fan of Brian K. Vaughan? Check out the review for issue #1 of PAPER GIRLS!

One of the bounty hunters chasing down the family is The Will, a man who seeks vengeance for his deceased lover, The Stalk. His love for The Stalk drives him to continue his search for the family and seek vengeance from her killer, Prince Robot IV. It turns out, though, that another Wreather, Gwendolyn, joins his search and is also revealed to be Marko’s ex-fiance.

This scenario mimics the sort of troubles any of us can face in this day and age. It’s so easy to get tied into a love triangle with anyone you pursue, considering the advancement of technology. The 21st century allows us to travel easily and communicate with people hundreds of miles away. It easily creates a dating pool extended from hook-ups and short-term dating. This harsh reality is imitated by the problems The Will faces, mourning over a lover and his back-and-forth pursuit to understand his feelings, move on, and be with Gwendolyn. Even so, this sort of dramatic turn of events is reinvented successfully to reflect that even spider aliens and bounty hunters have messy dating lives too. 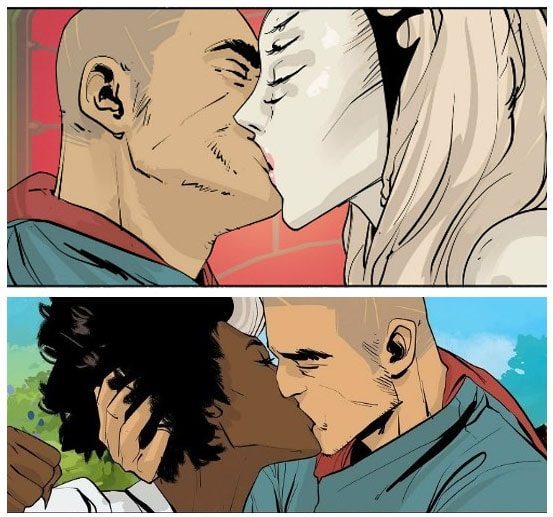 Queer Justice For All

Upsher and Doff are tabloid journalists that weave in and out of the story throughout the story, but become the main focus in issue #33 because of their romantic relationship. It gives us the presence of an LGBTQQIA romance between two characters in the story and is also highlighted more because they play a role in the supporting cast. They are bonded by their passion for the scoop on the family, as well as being partners in the story. This bond makes for an ideal relationship, where we find the two having each other’s back through it all.

The planet they descend from, Jetsam, disapproves highly of homosexuality, though, and easily captures similar issues many people face who label themselves as gay, bi, or queer in our world. There is a huge number of people who identify as  LGBTQQIA, many times coming from backgrounds of disapproval stemming from family members, friends, and communities. The issue Upsher and Doff face help encourage the two to travel together far from the planet and live a more fulfilling life doing what they love with who they love. 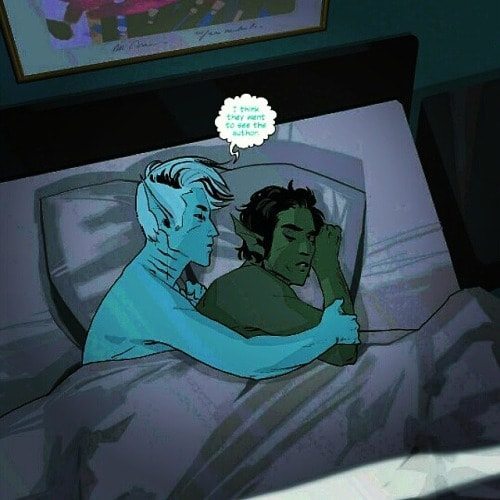 SAGA really goes in depth with the complications at hand in the dating world, but it also outlines real problems that exist for many of us. Its relatability hits home for many readers and gives the space opera edge, cutting it close with each couple’s woes and problems with trying to keep their relationships less complicated. The pursuit of happiness seems too far to grasp for many in this story, but it’s what becomes most appealing part of their development as characters for SAGA fans.