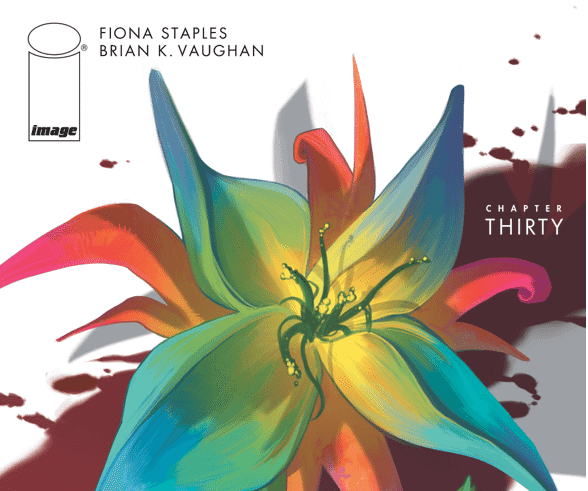 SAGA by Brian K. Vaughan and Fiona Staples consistently remains one of the best comic books on the stands. Issue 30 marks the last issue before the book’s hiatus and closes out this chapter, while also setting up some interesting predicaments for our characters in the issues to come. 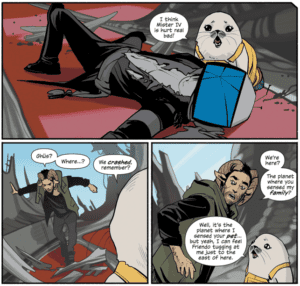 SAGA #30 finally brings both sides of the story together, with Marko and Prince Robot IV finally reaching the planet where Alana and Hazel are being held captive by the remaining members of the Revolution. Hazel’s narration describes how “every relationship is like an education.” This issue deals with many different characters’ relationships becoming more and more complicated, especially between Marko and Alana, and how these complications lead to a better understanding of who each of them. There are also some well-deserved reunions in this issue, but who gets reunited with who is a question I’ll leave you to find out for yourself. Blood is shed. Lasers are fired. Swords are slashed. Expletives are uttered. It’s SAGA at its best. Just read it.

Talking about this issue is a little tough, since I seriously don’t want to spoil some of the great character moments in an issue chock-full of them. One thing that writer Brian K. Vaughan always manages to drive home issue after issue is how complicated the idea of family can be. People weave in and out of our lives constantly impacting them in slight and significant ways. BKV expertly handles this idea, and this issue portrays it better than most. My only gripe is that we only get a few pages of Lying Cat’s crew, but even those few pages are monumental. Fiona Staples is relentless this issue. Every panel is bursting with color as our characters fight to survive across a snow-ridden planet. Staples’s character art is also some of the most expressive that I’ve seen, well, ever. You can feel each character’s emotions bursting through the pages. She even manages to express genuine emotion through the faces of TVs in the most imaginative of ways.

Every month I hope to one day read a bad issue of SAGA. Unfortunately for me, this issue is not that. SAGA #30 is another amazing installment of one of the most consistent books out there and only keeps me wanting more. With another hiatus on the way, SAGA’s vacation could not end any sooner for me.