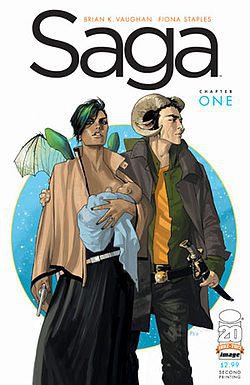 Saga has become the stuff of legend throughout its run so far, and it isn’t hard to see why in issue #24. This issue follows the mysterious The Brand as he searches for his missing brother The Will with his sidekick Sweet Boy, an alien dog with some cool powers.

For more cool characters and powers, check out our other reviews!

Throughout this issue, as with previous issues, we see a plethora of different life forms from the imaginations of Brian K. Vaughn and Fiona Staples. This is where Saga really pulls me in, personally, as the immense variety keeps everything interesting. We are in a constant shift from planet to planet, seeing such creatures as talking seals, human-sized rat-mutants, and all manner of aliens, both grotesque and beautiful.

What is the line between grotesque and beautiful?  Find out in our Comic Book Theory posts!

One of the most interesting is The Stalk, a massive human-spider hybrid, who is presented to us in mid-coitus in this issue. Many people might recoil in horror from the sight of a multi-armed, multi-eyed spider-woman, but Fiona’s art does more to make this creature realistic and relatable than unusual. Her conversation with The Will is very human, and it is not difficult to place oneself in the shoes of the copulating couple. There’s quite a funny spinneret joke thrown in there, too.

No joke- we have a ton of blog posts!  Everything you need to know can be found here!

Plot-wise, this is not a book that you can easily open a random issue and merge into the storyline. You will need to play some catch-up with online summaries if you don’t feel like starting from square one. That said, I highly recommend you start from square one. This has been a fantastically imaginative adventure throughout its run so far, and each issue builds upon the previous issues in a way that a culmination of all that has happened is hard to picture. That culmination, though, is going to be one heck of a thing to see- much like every gorgeous panel of this book.

Have you been following Saga?  Who’s your favorite character?

For interviews with creators like Brian K. Vaughn, check out some of our excellent videos!