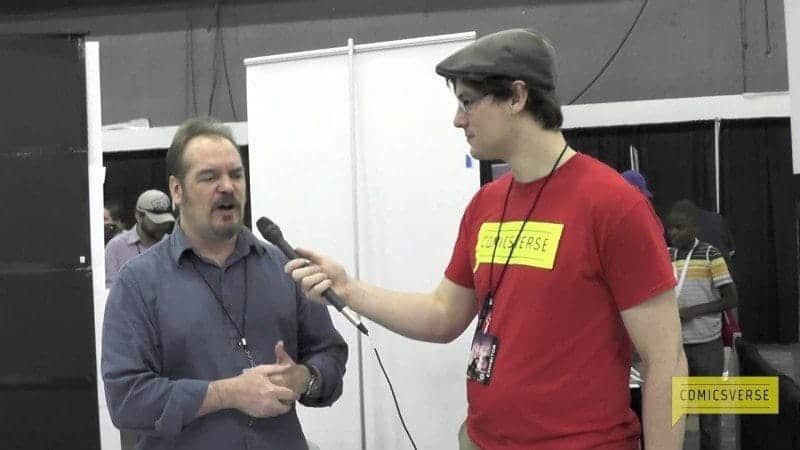 With Special Edition: NYC 2015 comes quite a crowd. Fans and fanatics flock to find their favorite artists and authors. They commission original works and buy memorabilia of all kinds.  No stranger to comic book art, Russ Braun has a fanbase as large as Comic-Con itself.  He has a storied history, working early on with Vertigo, Disney, and DC. People recognize him almost immediately for his work on FABLES and FAIREST, two fantasy titles, a genre that doesn’t get represented as often in comics.

It’s easy to see how Russ has been around the industry so long- not only is he talented, but he speaks highly of his creative colleagues. Russ Braun has a positive energy and attitude that infect others. It’s easy to see why he is a sought-after artist.

Russ Braun and WHERE MONSTERS DWELL

One thing that he loves about his work on FABLES and FAIREST is that it allows for him to explore a lighter side of art, rather than the typical dark and gritty side of things you see in other genres.  He is no stranger to titles like Batman, but he enjoys the more realistic titles that allow him to really portray a lifelike reality.

Russ Braun currently works on the Marvel title WHERE MONSTERS DWELL, an incredible title that ComicsVerse has been following.

WHERE MONSTERS DWELL brings him to the land of dinosaurs. This gives him a whole new challenge when it comes to his art.  He is certainly a diverse artist, which a huge variety of subjects, but that’s what keeps it interesting for him.  It’s also one of the most fun projects he ever worked on.  Make sure you pick up the next issue of WHERE MONSTERS DWELL!