I could hardly think of a more fitting title for episode 8 of RUNAWAYS than “Tsunami.” We’re met with not only a tidal wave of new places and information, but chaos breaking out between both the Pride and the Runaways. This episode is endlessly entertaining. The whirlwind of action, the deepening of character motivations, and the sheer chaos of it all made for good television. The stakes are higher than ever, and the end feels closer. The episode will keeps you glued to the screen, dealing out blows at a break-neck pace.

At the same time, the episode leaves us with few answers and even more questions than ever before. This isn’t a bad thing, though. The questions the show’s been giving us are captivating, but it feels like the number of answers we’re getting aren’t exactly equal. RUNAWAYS finally gives us some answers about Amy in the episode. However, the show provides a lot more questions, too — both about Amy and otherwise.

How Hulu’s RUNAWAYS Could Shatter a Millennial Stereotype

What Happened to Amy?

Amy Minoru has been a ghost hanging over the plot of RUNAWAYS since the first episode. Slowly, we are discovering more and more about Amy’s alleged suicide — or possible murder. Nico confronting Alex about a password unravels a troubling tale of Amy’s last day alive.

I was surprised by the reveal of how Alex knew the password — I thought Alex was keeping Tina Minoru’s password a secret to preserve Nico’s feelings. Honestly, I had assumed that the password was something along the lines of Amy’s birthday or date of death. In my imagination, Alex had guessed the password. It would be something that would make Nico feel, once again, like Amy (and the loss of her) was more important to her mother. However, the truth about the password is much more thrilling. 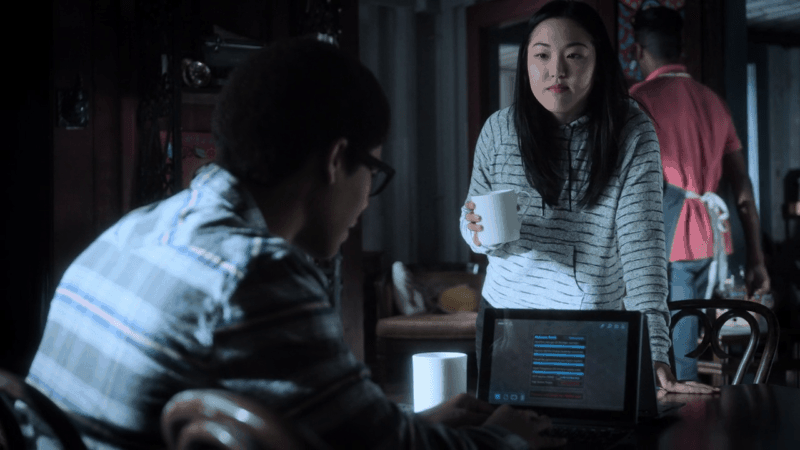 Alex helps Amy realize that she is being keylogged, likely by her mother. Courtesy of Marvel Entertainment.

Not only do we find out that Alex and Amy met up the day Amy died, but we also learn that Amy had hacked Tina’s entire system at Wizard. Amy being the breach in the system means she might have found out everything about the Pride. The night of Amy’s alleged suicide, she and Alex had met up — only to have Alex reveal that Amy had been found out. While the tension between Nico and Alex is interesting for character development, the questions about Amy seem much more urgent.

How Hulu’s RUNAWAYS Could Shatter a Millennial Stereotype

Nico and Alex posit that Amy killed herself to evade her mother. However, things still don’t add up when it comes to Amy’s suicide, which Nico’s been saying for multiple episodes now. Especially when Nico realizes that some of Amy’s belongings — her cell phone and her backpack — are still missing.

As Nico and Alex piece things together, things for their parents seem to be falling apart.

Chaos for the Pride

While the kids are solving problems, the Pride seems to be creating more. With Janet’s choice to shoot Victor, things are quickly getting hectic. The Pride’s members show up to the scene one by one, intimidating Chase away. The Pride tries to fix Janet’s mistake before Jonah finds out. Between all the chaos, we get slower scenes between individuals. Most notably, Janet Stein and Chase talk about the possibility of Victor dying, both trying to cope with the fact that they love their abuser.

There’s been a lot of talk about Victor’s brain tumor, and whether RUNAWAYS is using an illness to excuse Victor’s abusive actions. We finally get an answer in the short time Janet and Chase spend together — it’s not the tumor. Chase just wanted to use the tumor as a means to escape the reality of how his father feels about him. Unfortunately for Chase, the tumor was not the problem. 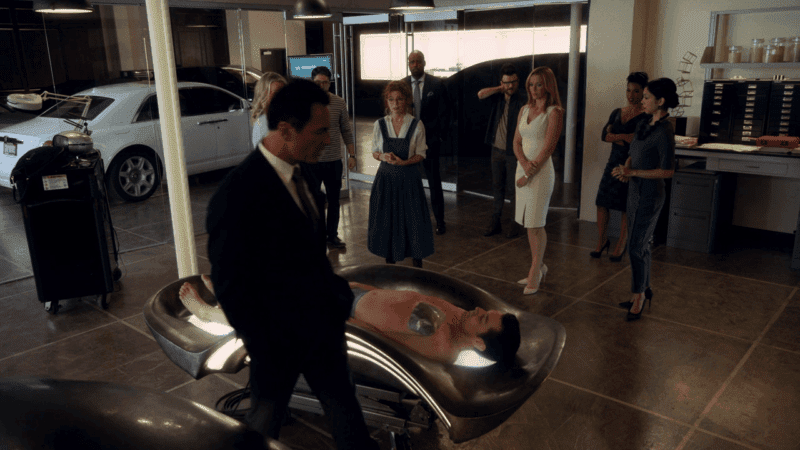 Jonah shows up to make decisions for the Pride. Courtesy of Marvel Entertainment.

Another Sacrifice — Or Not

Janet makes it clear she has no doubts about who Victor was when the Pride puts her on the table as a sacrifice. She points out that while the rest of the Pride got lavish gifts — houses, technology, scientific knowledge — she got stuck with an abusive husband. She calls the rest of the adults out on their hypocrisy, saying they’d just as readily hurt someone else if the safety of their children were at stake.

Unfortunately for the Pride, Jonah finds out what’s going on. Janet’s statement proves true as the entire group erupts into petty bickering. It is in this moment that Jonah suggests not only their lives, but the lives of their children are up for grabs if they don’t fix the Victor problem. Jonah’s solution is to sacrifice Janet because she’s the one who shot Victor. However, this solution quickly turns into yet another problem.

At the rate things are going, it seems that the Pride is going to defeat itself instead of by the Runaways. The scene that unfolds alongside Victor Stein’s death isn’t only great drama; it told us a lot about what’s keeping the Pride together and what might end up tearing them apart. Jonah seems to terrify everyone. Even Leslie, out of fear of being seen as a failure, was on board with keeping Victor’s death a secret. Tina, the one who eventually called Jonah to the scene, seems to do so out of desperation once the Yorkes fail to save Victor. 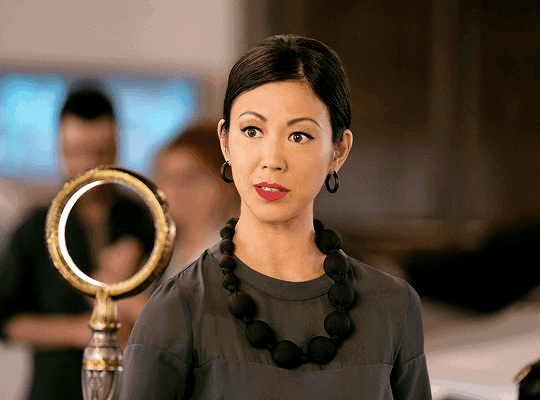 Tina, despite being thought of as cold and level-headed, is the one who destroys the box. Courtesy of Marvel Entertainment.

RUNAWAYS has made the Pride more interesting than the run-of-the-mill supervillains they were in the original comics by making them more human. It is more apparent, though, that they’ve become so human that they’re self-destructing. The Pride has begun eating itself from the inside.

Episode 96: Investigating X-Men’s Polaris in Comics and Fox’s THE GIFTED

Our protagonists spend a lot of time in the episode searching for things. Nico and Alex search for information about Amy while Gert, Karolina, and Chase search for answers and ways to fight the Pride. What truly steals the limelight, however, is Molly’s solo time. Molly ends up on a journey of discovery both metaphorically and literally as she spends time with Graciela.

RUNAWAYS gives us more time with Graciela and Molly as Molly finally discovers more of her culture. Molly gets a chance to explore the food her parents loved as well as comfortably slip into speaking Spanish with Graciela. While Molly still clearly suffers the blow of the Yorkes trading her off, she has a chance to find herself as a Latina through Graciela. Perhaps even more important than Graciela giving Molly a chance to explore her culture, she also gives Molly a literal key to information about her parents. 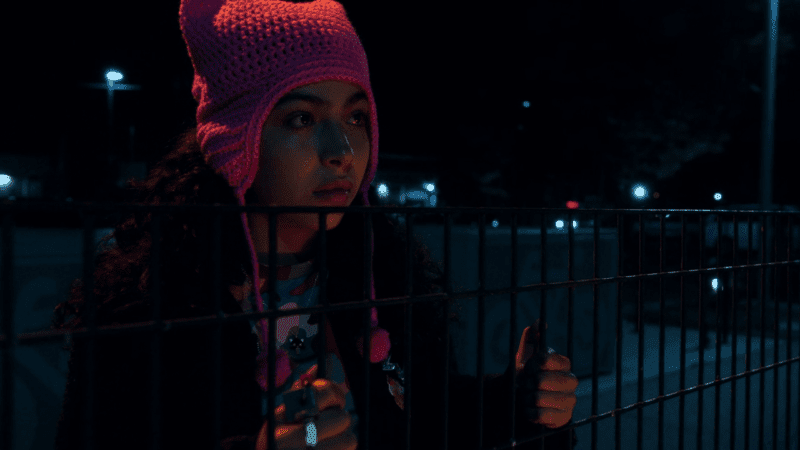 Molly proves her problem-solving abilities and competence while away from her older friends. Courtesy of Marvel Entertainment.

Molly’s real hunt for answers begins after Graciela gives her a letter from her parents alongside a key. The letter from the Hernandezes gives us a glimpse into the relationship between Molly and her parents. There’s a shared memory of Elian — something her parents assumed Molly would remember well enough to understand where to go with the key. Molly does, indeed, remember — and she decides to take control and find what her parents have left for her.

This is Why Hawkeye Deserves a Netflix Series

RUNAWAYS still doesn’t give us answers when it comes to Molly’s search, though. Instead of finding out what’s on the VHS, we’re given a gag about Molly not recognizing what it is. The gag was worth a chuckle, even if I had a bit of trouble believing someone Molly’s age really wouldn’t know what a VHS is. But what exactly is on the VHS — much like what’s on Amy’s phone — is being saved for later.

While the Pride is falling apart in Victor Stein’s lab, it seems that some of the kids were becoming even closer. Despite the fact that Gert had an ulterior motive (namely her super poorly-hidden crush on Chase) for going with Karolina to the Stein’s house. Startlingly “heteronormative” (to quote Gert’s own opinions on dating and romance) motives, at that.

Even with the complicated relationship drama, Gert and Karolina genuinely seem to want to be there for Chase. With the three of them forming a plan and Karolina plying information from her father, things seemed to be going pretty well. Even the rough spot between Nico and Alex doesn’t seem beyond repair. Nico decides to still work alongside Alex, even though Nico is (rightfully) upset with him. 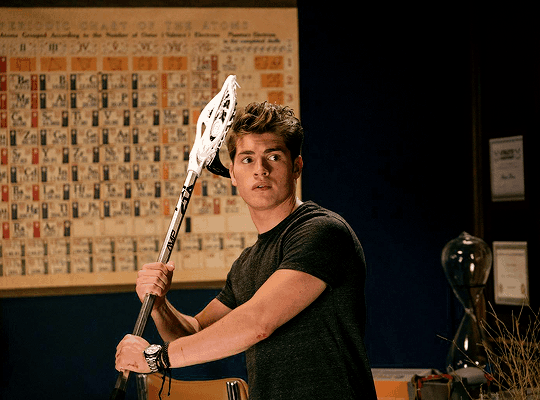 Chase’s fixation on self-defense is threatening to become dangerous. Courtesy of Marvel Entertainment.

It seemed like the kids were becoming a counterpoint to their parents. The Pride spent the episode letting their feelings wreak havoc and destruction, while their children seemed to respond to emotional setbacks with the resolve to be better. That is, until they, too, descended into chaos.

Karolina and Chase make it clear they’re no longer on board for sending their parents to jail. Karolina’s reasons are strategic, but Chase is running on his feelings alone. We’ve seen Chase fall into the same patterns as his father more and more often as RUNAWAYS progresses. Victor Stein’s toxic masculinity and constant abuse of his son seem to be molding Chase into another abuser. Chase is desperate to redeem his father in his mind. And he is willing to do it at any cost.

RUNAWAYS Pilot: Whose Show is it Anyways? A Look at Alex Wilder

Chase smashes the laptop, which destroys the evidence our protagonists had against the Pride. Chase physically attacks Alex, and his desperate “I’m sorry” afterward hardly makes up for the damage done. Perhaps the kids will still be counter to the Pride in how they tackle this situation. In a way, the destroyed laptop functions as their Victor Stein — an integral piece of the puzzle that has been irreparably damaged. How they go about fixing it will show the real difference between them and their parents. 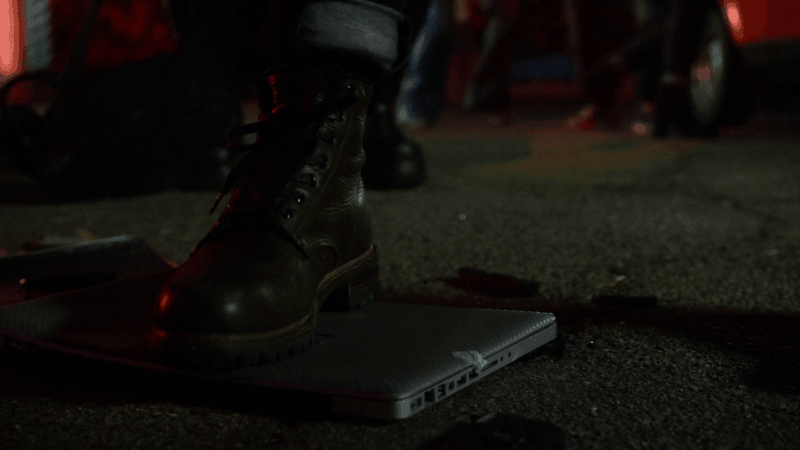 Another question: what will the kids do now that their evidence has been destroyed? Courtesy of Marvel Entertainment.

Compared to the last episode, this one kicks things into high gear. I was expecting an episode full of implementing plans and movement. Instead, we saw both groups coming together and falling apart, which I prefer. It gives the viewer a fair amount of meat to bite into. It’s fun to see things not work linearly. Like in real life, our Runaways seem to take a couple of steps forward, and then have to take a few steps back.

However, I am getting tired of the lack of answers — I’m sure that’s clear by now. Answering a few questions won’t destroy the tension in RUNAWAYS. After all, a lot of that tension rides on a question that can’t be answered until the bitter end: how, exactly, are the Runaways going to defeat the Pride?

The show giving us a more in-depth look at Graciela had me thrilled to bits. Even more exciting was Molly’s chance to not only work by herself but to reconnect with her heritage. Being able to see more of Amy in flashbacks was also fantastic. Yet I wasn’t a huge fan over the fact that, for a while, it felt like RUNAWAYS was trying to get us to pity the Pride. This episode made all of the humanization of the Pride worth it. Knowing these people will dig their own graves makes me perfectly happy. Watching the bitterness and abusive nature of these people drag them down is pretty satisfying.

Altogether, I couldn’t take my eyes off of this episode. I almost hope that the next episode doesn’t try to slow things down.