RUNAWAYS has always been a strange superhero comic book. With its focus on its teenage heroes, the story always balanced a sense of family with the fight scenes. That balance of action and character made fans flock to the original series. Rainbow Rowell and Kris Anka have placed a lot of focus on the team as a family unit in their current run. This has gone really far to draw fans in to their personalities, as well as the issues that drove them apart in the first place. In RUNAWAYS #8, though, Rowell gives readers their first taste of a classic story arc, filled with action and personality aplenty. After all, when Molly learns that her friend is apparently immortal and Doctor Doom besieges the Hostel, the team is in for a crazy Friday night. 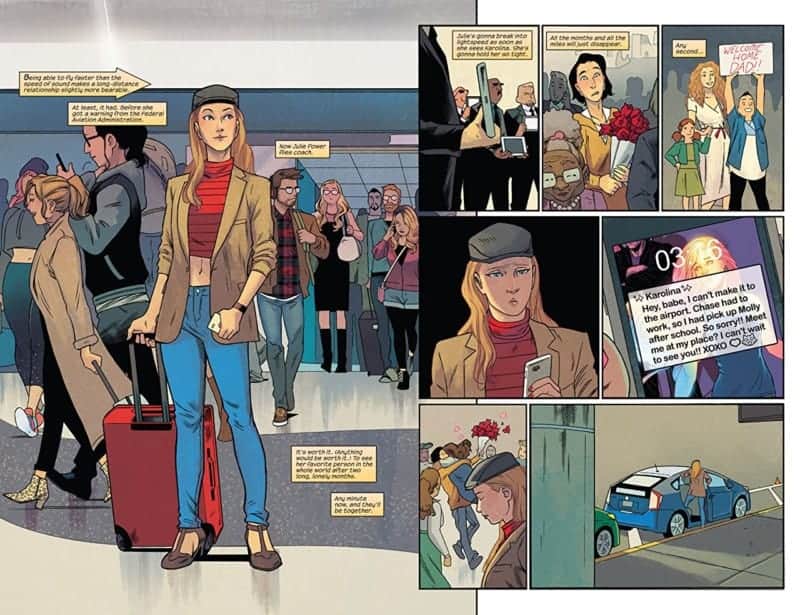 RUNAWAYS #8 sees the reappearance of Julie Powers to comics. A member of the sibling superhero team Power Pack, Julie made several appearances in the original RUNAWAYS run. Julie’s role in this issue cannot be understated. Rowell uses Julie as a stepping stone to examine the young Runaways. Julie acts as the poster child for a functional superhero family structure. She and her siblings battled monsters and aliens but never lost that central uniting factor. Karolina and the rest of the team assumes that they have to choose between being heroes and being a family. Julie’s presence insinuates that they can be both, and that works really well for this introspective series.

While the focus never truly falls on any of the other characters, I never felt short-changed. Rowell manages to showcase each team member’s personality in really cool ways. Molly’s upbeat attitude shines through from her first appearance. I seriously laughed out loud when Victor talks about the benefits of only being a head, and Nico’s anxiety about seeing Julie with Karolina maybe signals an interesting new dynamic on the team. Some of the characters, like Gert and Chase, didn’t quite get the same spotlight. However, they are also characters that played key roles in the previous arc. I am actually happier for the fact that we can hear some of the team’s other voices. 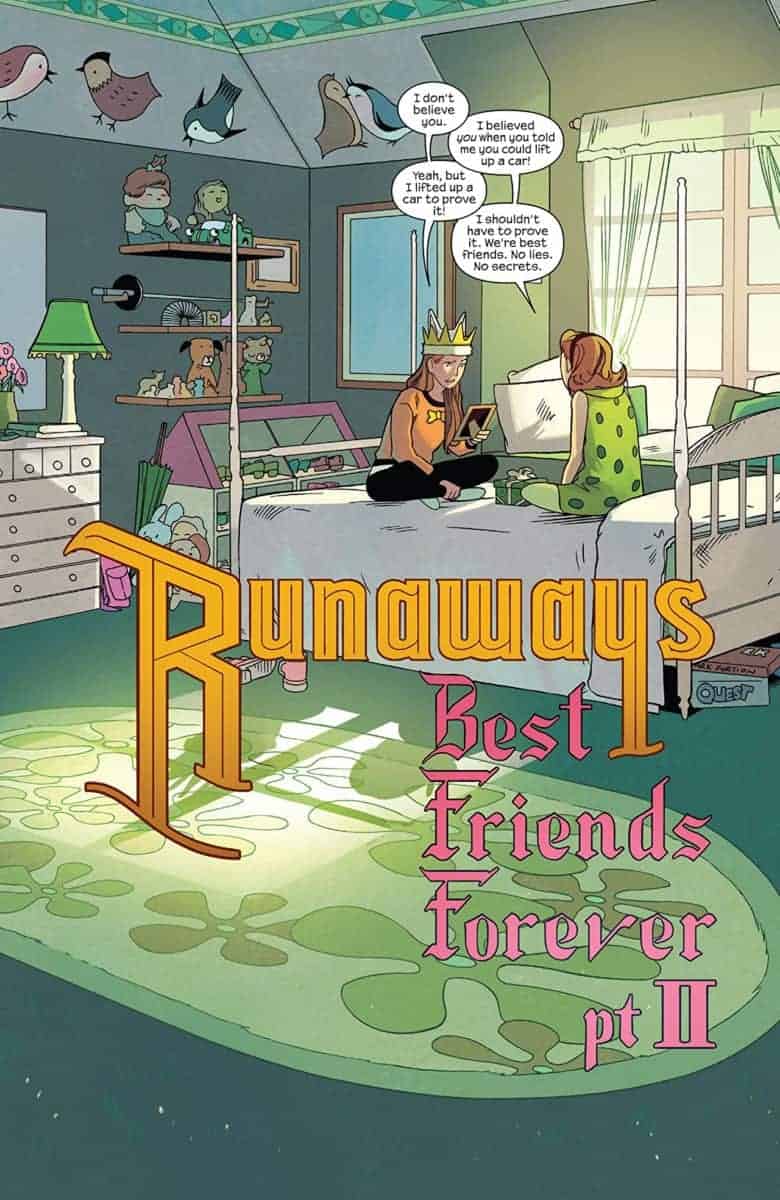 RUNAWAYS #8 gives way to the series’ first real battle scene, and I have to say how satisfying it is. The team really didn’t get to fight Molly’s grandmother’s superpowered cats in the previous arc, so this fight was needed. The coolest aspect, however, isn’t the fight itself. Rowell never pushes the pace too far. The fight acts as a sounding board for dialogue and theme. She manages to sneak some really cool character moments into this grand bout of fisticuffs, and that really excites me as a long-time fan. The Runaways were never about how hard they could punch the bad guys. They mattered because they acted like real human beings in the midst of intense action. They sometimes crumble under the pressure, which only raises the stakes and ups the intensity.

RUNAWAYS: A Spotlight on Molly Hayes

I only have one concern with RUNAWAYS #8. At the issue’s open, Molly is given the opportunity to join her friend in immortality. This scene is really cool, and features some of Rowell’s best written dialogue. However, it barely comes up again in the story. This opportunity is frankly massively life-changing. Molly could live forever as a thirteen year old, but she never really gets the chance to explore the consequences of that. Julie brings up something about the benefits of being a kid, but it doesn’t get explored after the Hostel is invaded. Something this big deserves a little more immediate page time, which we did not get. It doesn’t ruin the reading experience by any means, but it left me with a lot of questions. 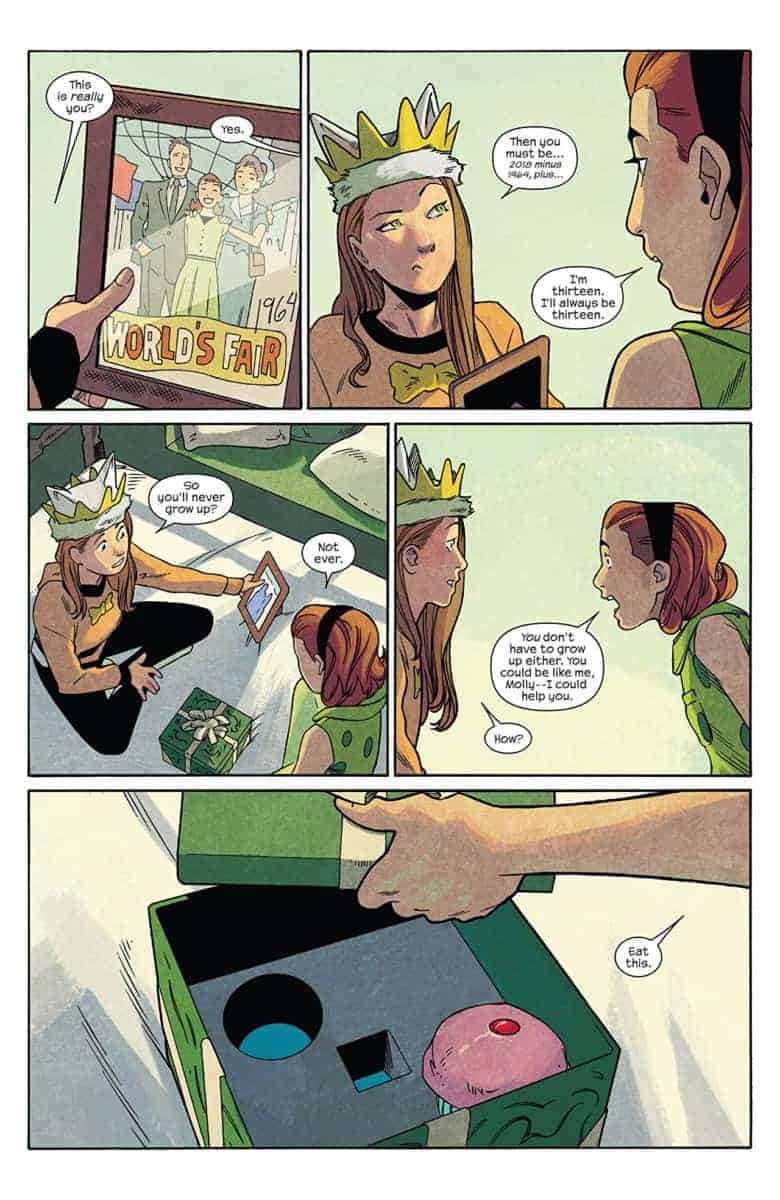 Readers get to see a new side to Kris Anka’s artwork as he depicts the frenzied battle at the end of RUNAWAYS #8. There’s a lot of pressure riding on his art here. Thankfully, though, Anka delivers. Every panel is packed to the brim with simple details that wow the reader. There is a splash page near the end that sees the team gathered in the Hostel’s main room. This scene starts off the fight, but it also manages to showcase every team member’s initial reaction. Your eyes are immediately drawn to Karolina and Julie flying in or the bulk of the team spread about the main foyer. However, if you look a bit closer, Molly is in the far background, holding up a fallen statue. This attention to detail carries throughout the issue and gives every scene a huge burst of energy.

Daredevil & Me: A Tale of Representation

Triona Tree Farrell makes her series debut in RUNAWAY #8, and I have to say that her color work differs quite a bit from Matthew Wilson’s. This isn’t a bad thing by any means. Wilson’s colors were a bit more muted, giving way to a more realistic aesthetic. However, Farrell’s colors use more saturated hues. This particular story feels far more fantastical than the others with this vibrant color set. This works perfectly for this story. After all, we aren’t dealing with realistic problems here. Molly is questioning immortality, and the team faces down Dr. Doom. This change in saturation just adds to the issue’s abundant energy.

RUNAWAYS #8 is one of the best issues in the series so far. In fact, I’d go so far to say that it is nearly perfect. The only issue that I can see is in its forgotten plot thread. Based on issue #7’s ending, I had assumed that Molly’s discovery of her friend’s immortality would be the primary plot thread. However, this quickly turns into a team focused issue. Despite this, the plot moves along at a balanced pace, and the characterization gives way to a stunning look at the Runaways as a team and a family. This issue stands apart as a brilliant battle story but also as a very human piece. It almost perfectly encapsulates what this team stands for, and readers should be excited about that.