When I first began reading Jeff Lemire’s ROYAL CITY, I chose not to read the description of the comic. This resulted in me having no idea what the storyline was for the series. I loved how Jeff Lemire has slowly been revealing the storyline and peeling layers of intrigue. ROYAL CITY #5 ends the first arc, which follows a family who sees the ghost of their brother or son, Tommy. Jeff Lemire does a fantastic job as both writer and artist. He writes a story that is both soft-spoken and poignant; it is emotional without being a melodrama. 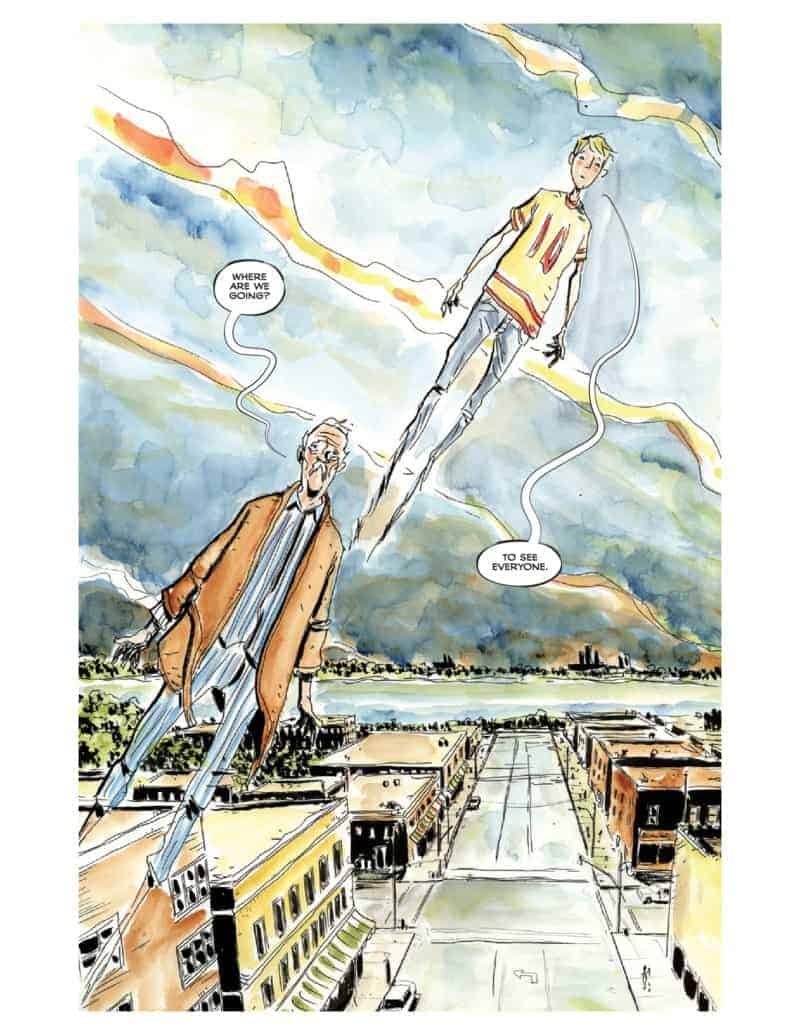 In ROYAL CITY, Jeff Lemire has returned to writing intimate, personal stories about a family in a small town, much like he did in ESSEX COUNTY. While supernatural elements play a part in this story, it is much more about the family and the characters. ROYAL CITY shows how a death in the family can shake every relative’s life immensely. Each of the characters in Lemire’s story is either depressed or dealing with difficult situations in their lives. Tommy visits each family member, altering his form to console them.

READ: Want to catch up on the great ROYAL CITY? Check out our first review here!

First, there is Pat who seems to be a stand-in for Lemire himself. Pat wrote one successful book titled Royal City, but now he can’t seem to recapture the success of his first novel. For Pat, the writing in his first book haunts him through a pre-adolescent version of Tommy. Tommy claims that Pat stole his experiences through the writing of the novel. Pat feels guilty about his success with his first book and this is reflected in Tommy’s accusations.

Then there is Tara who views Tommy as a young child. Tara has been trying desperately to have a child with her husband, but she quickly lost the baby. Here, Tommy represents Tara’s desire to be a mother and through the last issues, we have seen this possibility slip away with Tara’s estrangement to her husband.

After Tara, there is Richie, the youngest of the Pike children. He just wants someone to accept him without judgment. Tommy appears as his best friend, ready to get into as much trouble as Richie woud like. Finally, there is Patti, the Pike Family matriarch, who sees her son as a priest. Patti wants to live a wholesome family lifestyle, but her relationship with her husband, Peter, and her kids have stopped her from achieving this.

Lemire has drawn hints that Royal City may represent some kind of limbo. Pat tells the reader in the first issue that nothing really happens in the town which is one of the reasons he was in such a hurry to leave. Then there’s the fact that Tara points out that business in the city is dying, as many of the factory jobs have been exported to bigger cities. This evidence points to the fact that Royal City exists in a location away from life and civilization, much like a form of limbo. ROYAL CITY #5, however, takes the purgatory levels to a new extreme. 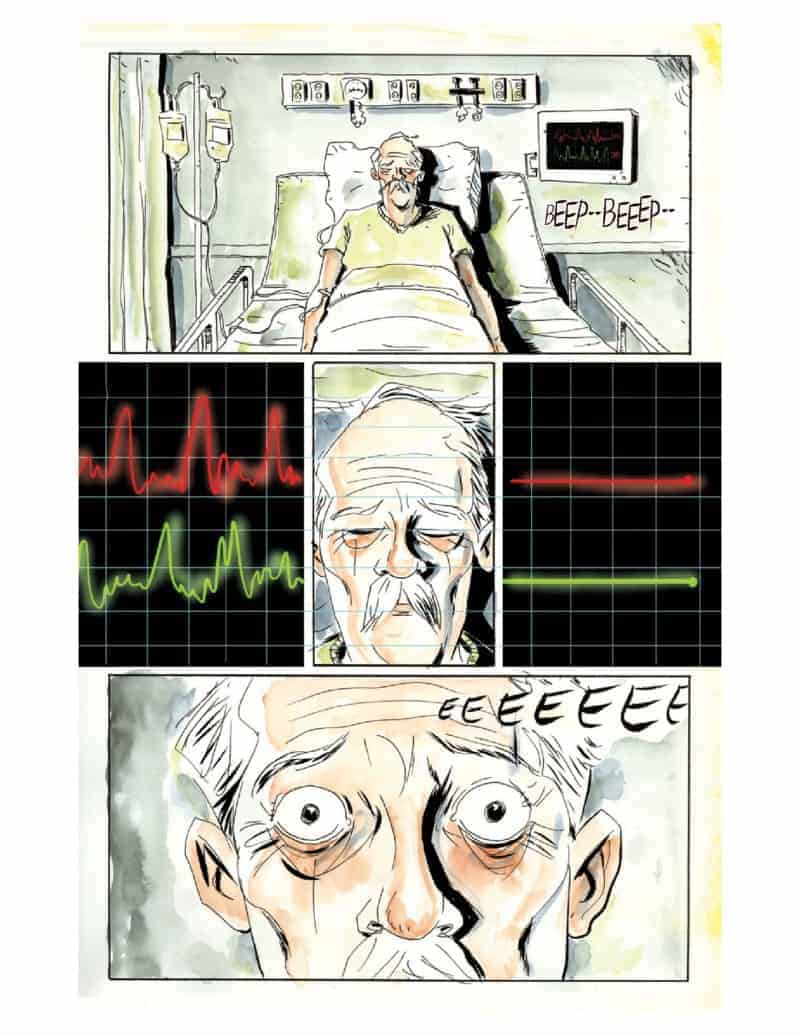 This issue stars Peter Pike, who has been in a coma since his stroke in the first issue. Tommy comes during Peter’s coma to take him on a journey across Royal City. We get a literal out of body experience for Peter as he sees his family struggle with their personal dilemmas. In his ghostly form, Peter can do very little to help his family through their difficulties. Instead, he joins Tommy for a bit, watching the world of the living without being a part of it. This is a great metaphor for how Peter feels powerless in his everyday life. After last issue’s emotional ending, ROYAL CITY #5 gives us a fresh new perspective by focusing on Peter and his relationship with his late son.

You either are or aren’t a fan of Jeff Lemire’s style of art. I have always been a fan of the odd way Lemire draws his characters. They always are depicted with bright red cheeks, black dots as eyes, and visible lines marking textures and wrinkles across their faces. In fact, much of Lemire’s art style looks like it was made through a collection of scribbles.

READ: Jeff Lemire has been working on OLD MAN LOGAN. Learn what we thought about it here!

This ultimately works for the strange and slightly haunting story that is ROYAL CITY. For example, when Tommy and Peter ascend into the air, their feet shrivel up giving them a cold, ghostly presence. In this way, it reminds me of Lemire’s work in Scott Snyder’s comic A.D.: AFTER DEATH. That comic also profited from the cold and bewildering look of Lemire’s drawing. The art always gives you a feeling that something isn’t right. 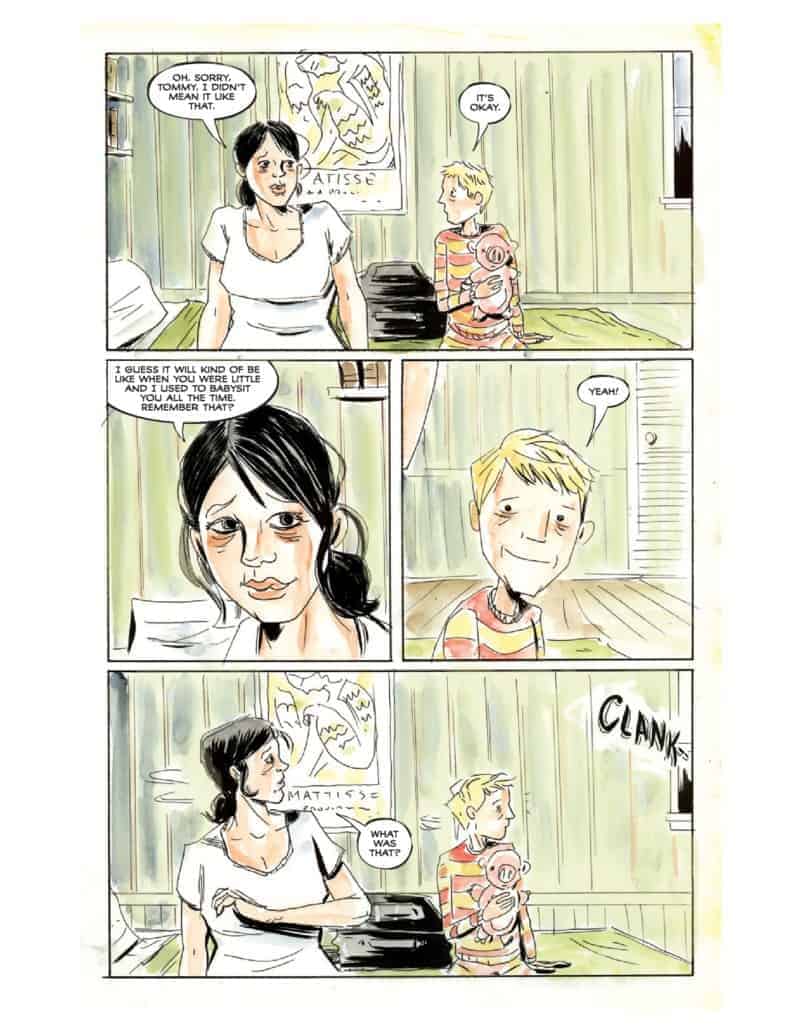 Lemire draws his characters in starkly different ways than most comics. Unlike a majority of superheroes, the characters in ROYAL CITY #5 look very misshapen, unglamorized, and weathered. Their physical flaws aren’t just shown, they are emphasized. Since the story is about the Pike Family and their vulnerabilities, this also works extremely well for the comic. Lemire is trying to depict a family literally and figuratively haunted by the death of Tommy. The art adds an eeriness which mixes perfectly with the emotions the Pike family is facing.

ROYAL CITY concludes its first arc with more questions and speculations. Lemire has piqued my interest with these characters. I can’t wait until he reveals more about all of them. I know he is also going to reveal exactly what happened to Tommy in 1993. We know he drowned, but it feels like there may be more to it than that.

Jeff Lemire really knocked ROYAL CITY #5 out of the park, along with the rest of the issues in the series so far. His art is a welcome change from glamorized depictions of character in comics and his writing really is profound. If you want a story that is different and powerful, check out ROYAL CITY.