The second issue of Top Cow’s new series ROMULUS (written by Bryan Hill and illustrated by Nelson Blake) is now on shelves. If you are unfamiliar with the series, ROMULUS follows the story of Ashlar, the last female assassin trained by the secret society Romulus, after she goes rogue. Since birth, she has lived a horrific cultish life within Romulus and now holds an intense desire for vengeance against them. Issue #1 ended with Ashlar saving the life of Nicholas, a brilliant young scientist whom Romulus wanted to kidnap and recruit for their own needs. ROMULUS #2 involves a discussion of Nicholas’s fate and the introduction of two new powerful (yet a little sketchy) women.

In my review of issue #1, my main hopes for the comic were that it would explore Ashlar’s anger issues, there would be more focus on the characters, and the art would get better. All of these things did happen in ROMULUS #2, and I am ecstatic about it.

READ: Speaking of which, here’s our review of ROMULUS #1!

The new issue opens with Ashlar and Nicholas eating at a Korean restaurant and discussing conspiracies. Nicholas wants to prove he can help Ashlar even if he doesn’t fight, and Ashlar is convinced that he’ll die if he joins her. Their dialogue is witty and engaging. Everything Nicholas says is filled to the brim with nerdy dry humor. And while Ashlar has the whole edgy antihero shtick going on, she still cracks a few jokes here and there, which is nice. It means she isn’t solely limited to being the Strong Female Protagonist. In general, this scene starts to break into that façade. Ashlar begins to admit that she’s not as strong as everyone thinks she is and that she constantly doubts herself. 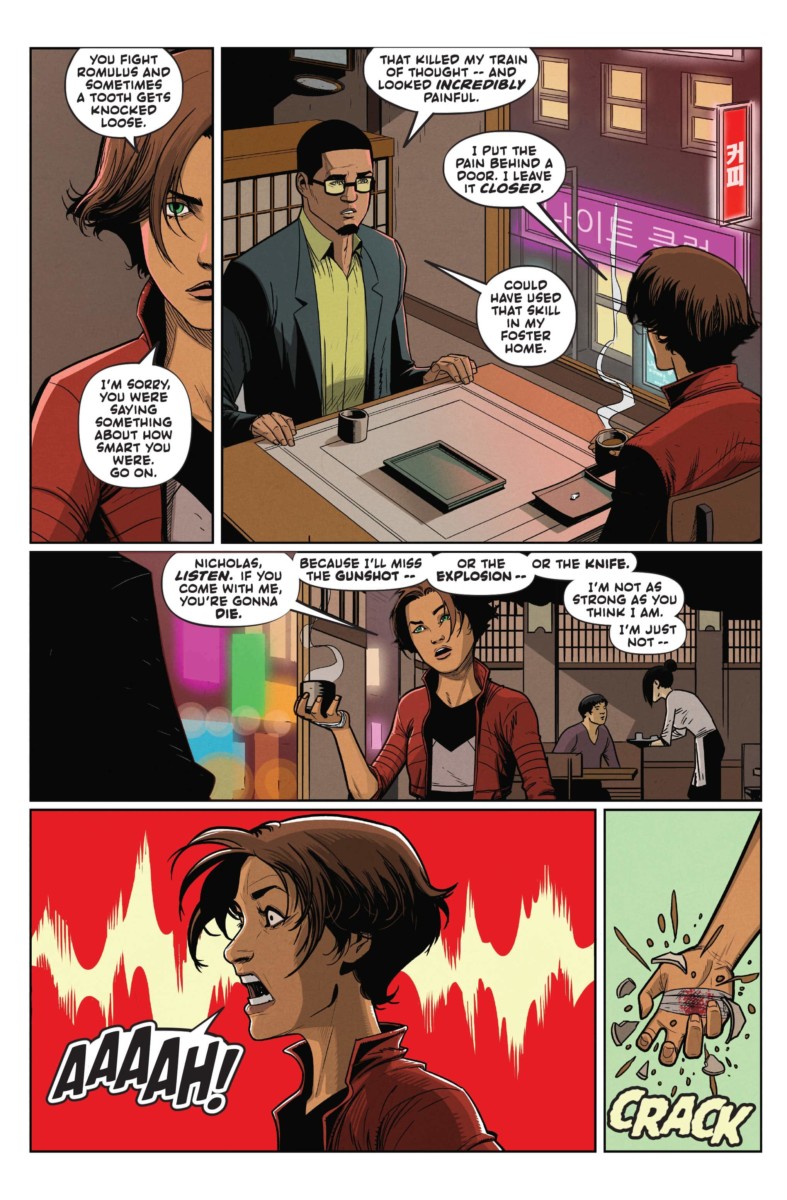 ROMULUS #2 also introduces us to two new major characters. There’s Sozo, a famous pop singer who happens to have psychic powers. She contacts Ashlar and invites her (and Nicholas) to a vast mansion for a discussion. Sozo works for another secret society that works against Romulus called…wait for it…the Illuminati. She wants Ashlar to join.

Needless to say, Ashlar thinks this is absurd and knows something is definitely up. I mean, aside from the whole Illuminati thing (and the comic is very self-aware of how ridiculous that premise is), Sozo is a wealthy celebrity who knows a suspicious amount of how Romulus, an organization that controls the wealthy and influential, works.

However, she points out the parallels between Ashlar and herself. Both women have been trained from birth and exploited by secret societies that consistently dehumanize them, calling them wolves or butterflies. Sozo says she knows exactly how it feels to be alone. She calls Ashlar out on being constantly angry, saying it’s something Ashlar must learn how to control if she wants to save anyone.

READ: Did you know they are turning Y: THE LAST MAN into a TV series?

I feel like the comic is hinting here that Sozo might be a foil to Ashlar in some ways. With similar upbringings, they have reacted to their lack of control in different ways. Ashlar works against femininity. To take back control over her life, she takes on a man’s role, channeling aggression, violence, and anger to achieve her goals. Yet while this helps her survive, it is also harmful to her. If she’s constantly comparing herself to her warrior mother or to the hitmen, she will never live up to her own expectations.

Meanwhile, Sozo works within the patriarchal system to attain power. She relies on sex appeal and emotional connections to do her work for her organization. And yet, other characters (such as Ashlar) view her as untrustworthy through her success at being a feminine icon. She takes on the role of seductress for her organization and merely becomes an extension of them, a tool. Ultimately, she might have fame and wealth through the path she’s chosen, but she gets to be an icon, not an individual. Sozo has no real control over her life. She’s bleeding when she does the Illuminati’s bidding. 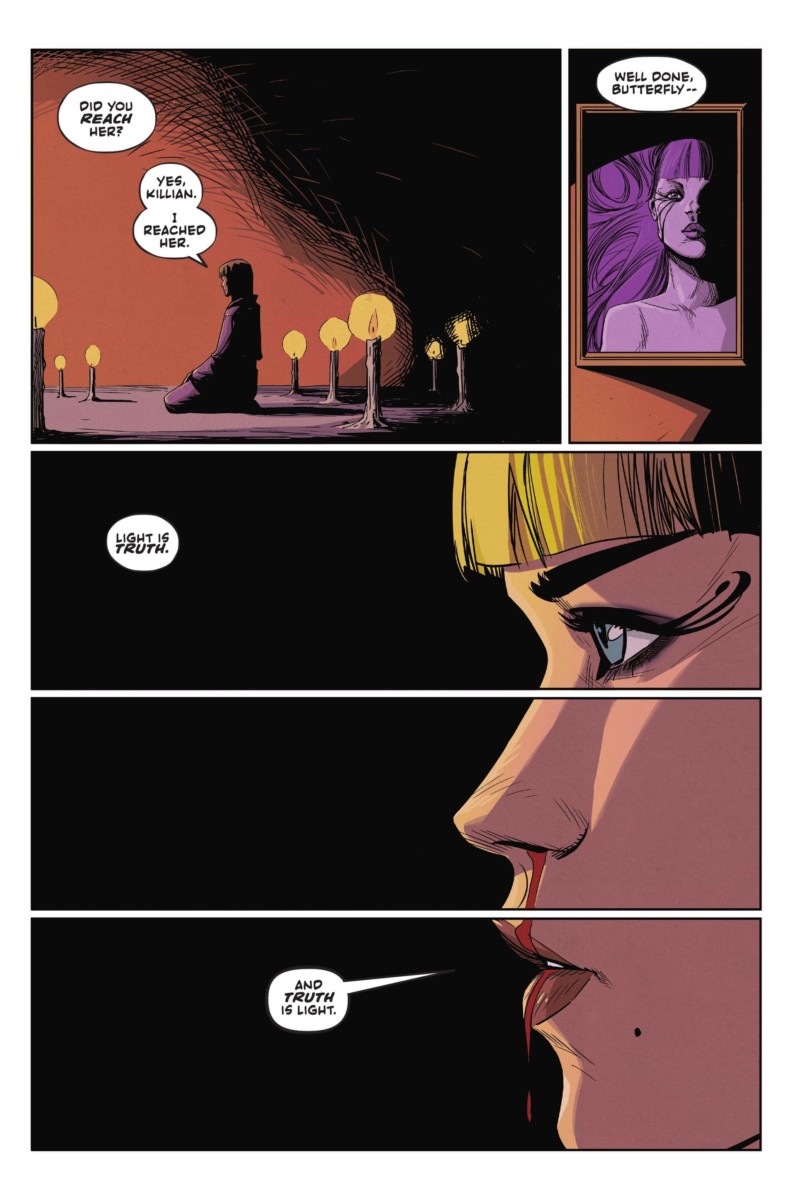 The other woman we meet in ROMULUS #2 is Reagan Strauss, a billionaire running a Romulus-affiliated business called the World Economic Trust. She makes herself clear as a villain, sending a hitman to Sozo’s mansion to kidnap Nicholas and intimidate Ashlar, although we are not yet sure what exactly she wants from these characters. What we do know is that Reagan identifies with feminism and has written a lot of books about rising to the top as a woman.

One might claim she is a straw feminist, meant to debunk the entire movement, but I don’t think that’s what’s going on here. Many of Reagan’s points about gender are solid and grounded in real study. There’s an excerpt from a book she wrote at the back of the issue which talks about the ways patriarchy places women in different roles and demonizes them for any role they take.

This is a legitimate theme in ROMULUS so far. Her book talks about how women are demonized for showing masculine aggression (Ashlar), called seductresses for following feminine roles in the system (Sozo), and called bitches when too independent within the system (Reagan herself). Reagan believes she has rejected patriarchy and is doing something new. However, this is where she is wrong.

Reagan believes that the economic and political systems, which are all tied to Romulus, are unrelated to patriarchy. She believes that if she climbs high enough on the ladder, she will be exempt from sexism. However, she is working with an organization that separates girls from their families, psychologically and physically abuses them, and turns them into killing machines. This same organization wants her to send the military and corporations into the Middle East for their own purposes. Reagan tries to consolidate this with her feminist beliefs, claiming that the increased occupation would help liberate young women in these countries. However, increased corporate occupation means tons of female workers in sweatshops. Increased military occupation means increased sexual assault of civilians. Romulus does not care about women, even if Reagan pretends it does.

READ: ComicsVerse explains why the trope of the white savior is a problem in comics!

There is a brilliant scene where, in the captions, Reagan uses the image of an oppressed Iraqi girl to justify military occupation of Iraq during an interview. She says that she believes in this girl and wants her to succeed. Meanwhile, in the visuals, Ashlar is battling the hitman that Reagan sent against her. This is a fantastic use of panel layout and imagery to swiftly indicate that Reagan’s words and actions do not line up. She is a feminist working for an inherently anti-feminist group. Maybe one day she will realize it.

That sequence is a perfect example of how the artwork in this issue has improved. Yes, Ashlar and the hitman still looked rigid while fighting in that scene. However, there was real experimentation with panel layout! Two interconnected scenes went on simultaneously, through the images and the words.

There are a few other points in this issue where a lot of thought has gone into panel layout. For instance, when Sozo communes with Ashlar telepathically, we get a one-panel page with all the imagery Sozo is sending Ashlar blending together. Because there is no separation between the images of Sozo’s home, Sozo’s face, the wolves, and the butterflies, they all come off as one connected message that Sozo is sending. And the text flows from Sozo’s face to Ashlar’s face, indicating the flowing of thoughts from one mind to another. 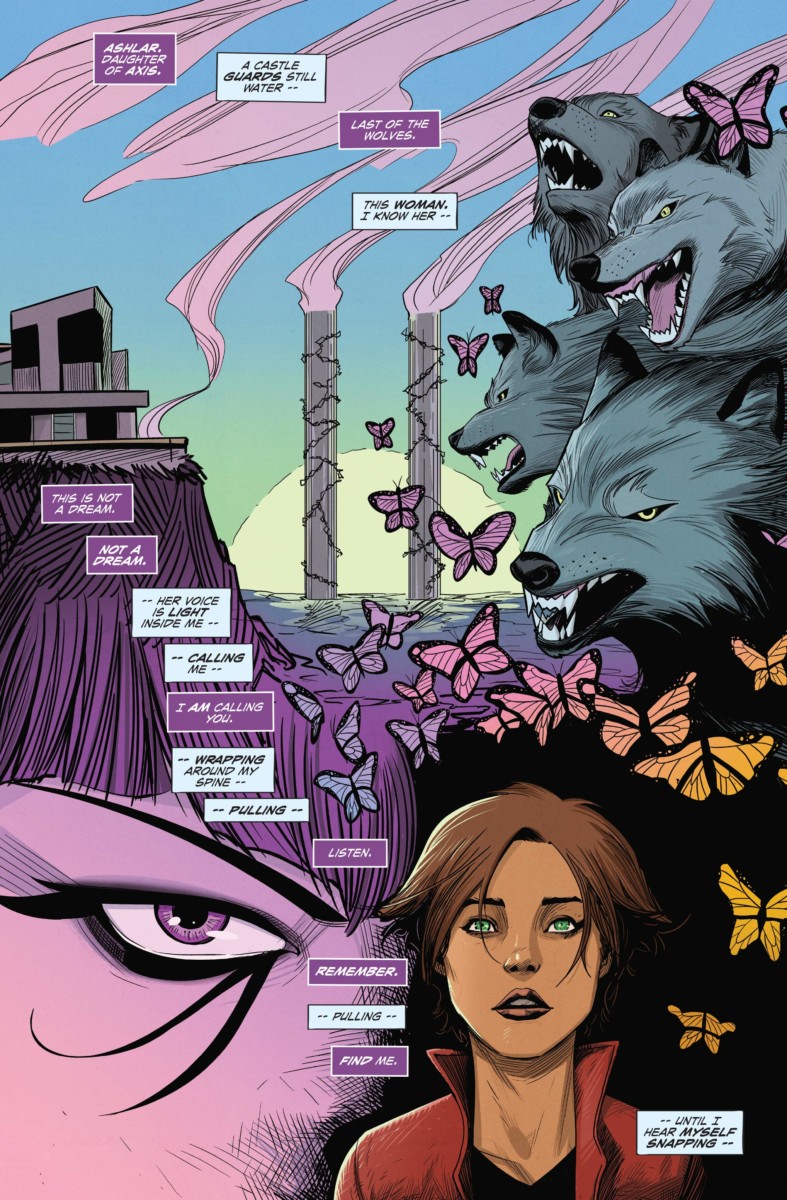 Aside from improved panel layout, this issue also has some beautiful backgrounds now, especially when establishing location. In the first issue, all of the backgrounds were flat colors, which made the whole comic seem flat. Now, there are only flat color backgrounds during emotional reactions. It makes those panels feel way more significant when they do show up.

In general, I believe ROMULUS #2 is a huge improvement from ROMULUS #1. We’re getting to know the characters and starting to see major themes of how oppressed people navigate their own oppression. I’m excited to learn more about these three “nasty women” and watch them learn to break free of their flawed roles.