October 5 marks the release of the gritty, ambitious new series ROMULUS, from Image Comics/Top Cow and written by Bryan Hill with artwork by Nelson Blake II. And if you are into tough mercenary chicks, gritty dystopias, and secret societies, you should probably check it out. 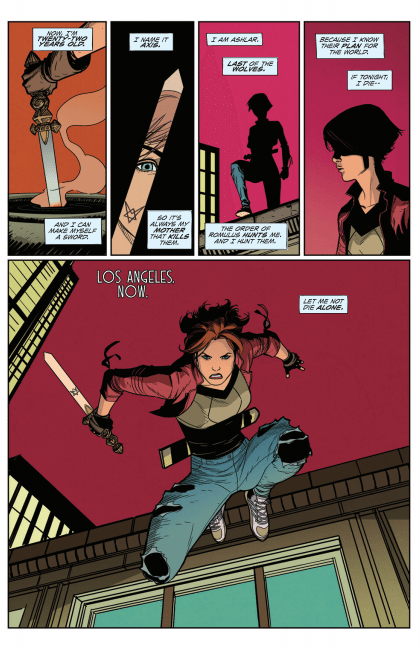 The main premise of ROMULUS is that the world is under the control of a secret society called The Ancient Order of Romulus, which traces its origins back to Ancient Rome. Romulus trains women from birth as assassins called “Wolves” to carry out their dirty work, but when two Wolves (the protagonist Ashlar and her adoptive mother) go rogue, the society sends drugged up hitmen called “Hunters” to murder all of the Wolves. Only Ashlar makes it out alive, and she wants vengeance.

The first issue spends most of its time explaining the backstory through Ashlar’s narration, and the text is beautiful. It has this flowing, poetic quality to it that builds up an epic, dire atmosphere (fitting for the dystopian setting that the story is going for). Ashlar’s narration weaves in painful metaphors and personification, such as describing memories as “scream[ing]” and comparing a man she’s about to kill to a bull she’s hunting. This all provides a sense of the intense trauma and rage that Ashlar carries with her. 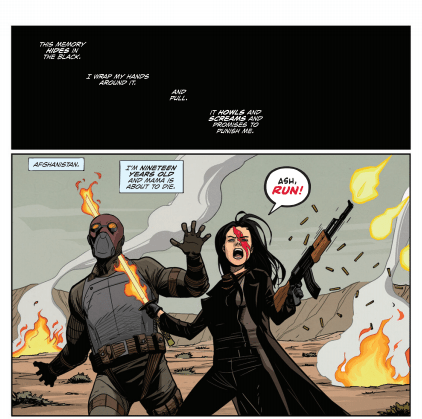 However, other aspects of the comic, such as the fast pacing and the focus on action over character interactions, get in the way of us getting to know that much about Ashlar as a person and why exactly she is so angry with Romulus. I mean, certainly the way Ashlar talks about her mother (Axis) makes it sound like their relationship was extremely important to her, so once Axis was killed along with the other Wolves that loss definitely had an effect on Ashlar. However, we’re introduced to Axis way too fast, and then she is killed off. There aren’t any memorable interactions between the two characters, so there is no real sense of what exactly the relationship was that Ashlar is grieving. I would love to see flashbacks to this dynamic in future issues of the comic, mainly because I think it is essential to understand what Ashlar has lost in order to understand Ashlar as a character.

Hopefully, we get to know more about the emotional impact Romulus has had on Ashlar. The first issue of the comic spends a lot of time stating simple facts about the organization, such as that they isolate young girls from their families and train them into killing machines, that they regularly puppeteer leading politicians and scientists, and that they are everywhere and omnipresent. However, as a reader, I didn’t really feel any of this. There should be no place safe from Romulus. They should be hidden in the background in panels. They should be disrupting scenes where Ashlar tries to talk to people in confidence. They should be on every TV screen and radio station. They need to be infuriatingly big. And they need to have completely wrecked Ashlar. I’d like to see Ashlar having trouble socializing with people because she doesn’t know how, obsessing over how Romulus could be at any corner, and unable to show any emotion but anger because she was taught to hide everything else. Because, right now, her anger and violence just seem like qualities of a typical Strong Female Protagonist, rather than traits of a human being who has been manipulated, tortured, and brainwashed.

As for the artwork, I felt like it was a mixed bag. The coloring was great, especially during the scene where one of the Hunters is confronting a scientist. Using such a simple palette with such bold color choices really made the characters stand out and added a lot of intensity and visual appeal. Also, the character designs, for the most part, were memorable. However, I do want to complain that, for a mentor figure who watched Ashlar grow up, Axis looks way too young. She looks about the same age as her daughter, and it’s kind of off-putting. Still, it could be that Romulus only works with young women or something. We don’t really know the full story there, so I am willing to give them a break on that one. The composition was what I took the most issue with. On the very first page of the comic, we get nine panels with just a flat image in the center of each panel, no background, and no perspective. Just turning to the next page lets you know that the first page was a stylistic decision and that the rest of the comic won’t look like that, but it’s a stylistic decision that looks really bland and sets you up to expect bad art. Even though the rest of the imagery gets better after that, there are still way too many panels that have the subject of the image right in the center. It makes a lot of the action look rigid instead of dynamic. And that’s not good when you’re trying to illustrate important scenes like Ashlar running from her dying mother or dodging a Hunter. 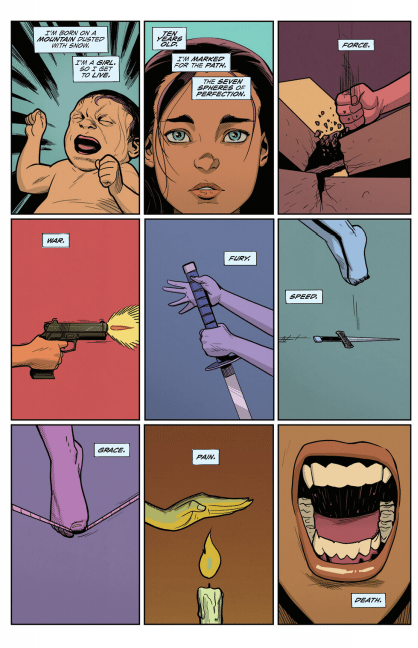 In general, I think ROMULUS #1 tackles a lot of intriguing themes. Already, it touches on dehumanization, brainwashing, and trauma, but it could go way further. Hopefully, future editions will flesh out our protagonist and demonstrate, both visually and in terms of characterization, why exactly this evil organization is so toxic.