The following post contains spoilers for both PROMETHEUS and ALIEN: COVENANT

Based on PROMETHEUS and ALIEN: COVENANT, director Ridley Scott seems far more interested in the adventures of his wayward android David (Michael Fassbender) than the Xenomorphs. Put aside your disappointment for the moment, because David has kept the ALIEN franchise from becoming stale. Despite its glossy 2017 visual effects, the films PROMETHEUS and ALIEN: COVENANT have more in common with the literature of Byron, Shelley (Percy Bryce and Mary), and Keats than it does with any of its franchise fore bearers.

David is more than a two-dimensional antagonistic. In David, Scott has created a modern science fiction equivalent of the Romantic hero. Scott then warps those traits to create a compelling villain that updates classical themes to reflect the modern views of the self, nature, and God. 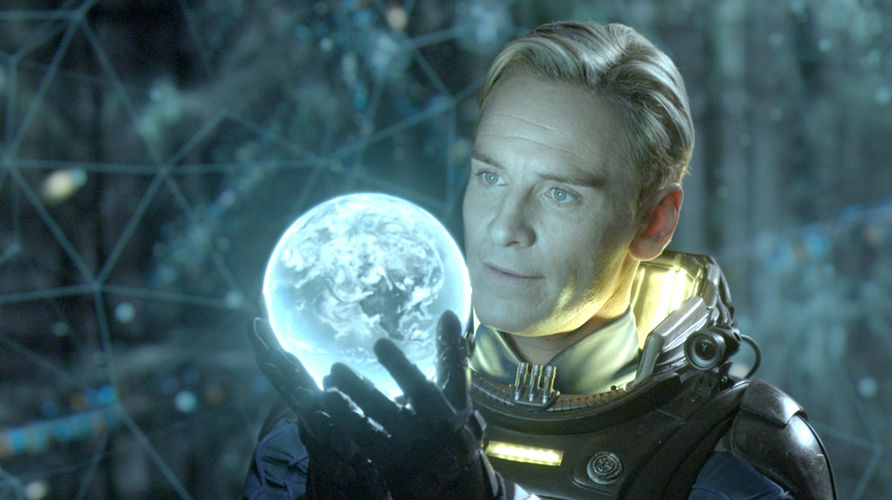 “…Placed outside the structure of civilization and therefore represents the force of physical nature, amoral or ruthless, yet with a sense of power, and often leadership, that society has impoverished itself by rejecting.”

David’s role in PROMETHEUS is essentially the put-upon servant. However, there is a quiet nobility to him. In the film’s opening, David is seen fulfilling a series of mundane tasks, but all of his actions seem slightly removed from humanity. Fassbender’s performance as David feels like one of those uncanny valley mo-cap characters made flesh. (Seriously, have you watched POLAR EXPRESS recently? Haunting.)

The story follows a group of scientists who believe they have found a map to the lifeforms, referred to as the Engineers, responsible for creating the human species. In David we see the answer to PROMETHEUS’ central question: We want to see and know God, but does God want us in return?

In the film, David discusses the nature of mankind’s origin with Dr. Charlie Holloway (Logan Marshall-Green).

Holloway: You think we wasted our time coming here, don’t you?

David: Your question depends on me understanding what you hoped to achieve by coming here.

Holloway: What we hoped to achieve was to meet our makers. Get answers. Why they even made us in the first place.

David: Why do you think your people made me?

Holloway: We made you because we could.

David: Can you imagine how disappointing it would be for you to hear the same thing from your creator?

Holloway doesn’t trust David and his robotic nature and responds to David’s question with a casual indifference. He gives David no more courtesy than you would a microwave oven if it asked you the same questions. Ironically, Holloway sees his position as different from David’s. He is a sentient human being and therefore, in his mind, he has a “purpose.” David is synthetic. Therefore, he has no more purpose than the thing he was designed for.

CLICK: Check out our look at the evolution ALIEN‘s production design!

Here we see David’s trappings as a Romantic hero. He looks the part of human, but his lack of pure human DNA makes him an outsider. However, David achieves a level of understanding that the humans around him don’t. He is all too aware of his purpose and his place in the universe. His bitterness about his servile position becomes the driving antagonistic force in the film’s climactic moments.

“I am alone and miserable. Only someone as ugly as I am could love me.” 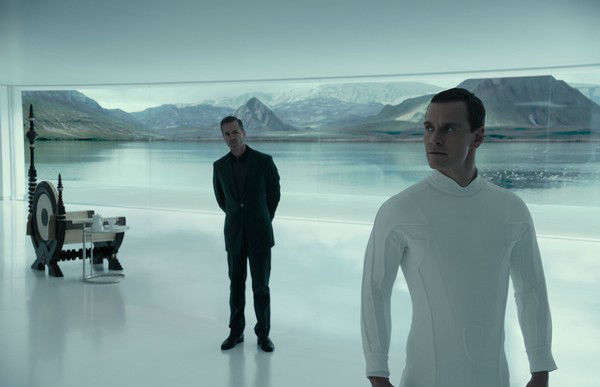 David also plays a deeper thematic role in PROMETHEUS. In a room full of creations seeking their creator, David stands apart. David has met his creators and found them lacking. David is nearly identical to them in every way but still held at arm’s length. Much like the archetypal Romantic hero, David can observe society but not participate in it.

If we consider Frye’s definition, David is a condemnation of man’s own vanity. Crew members of the Prometheus ship see themselves as above David, but the reality is the opposite. He is as far from his creators as man is to the apes. Imagine finding God and the first thing he does his throw his own feces at you.

He yearns to feel a part of a whole, beloved by his creators as an equal, not as a glorified iPhone. If we found God and received rejection, our once overwhelming affection would curdle like milk into spite and rage. David’s violent actions are done on behalf of Peter Weyland (Guy Pearce), the head of the Weyland Corporation. Beneath the surface, David’s resentment towards humans gives him a sick thrill during these destructive actions. He treats the crew like guinea pigs in horrifying experiments.

David reacts with a clinical indifference as the bodies of his crew mates are destroyed. In spite of this torture, Dr. Elizabeth Shaw (Noomi Rapace) still shows David kindness. Much like the blind man who showed the Creature kindness in FRANKENSTEIN, Shaw’s compassion is repaid in death.

“Satan has his companions, fellow-devils, to admire and encourage him; but I am solitary and detested.” 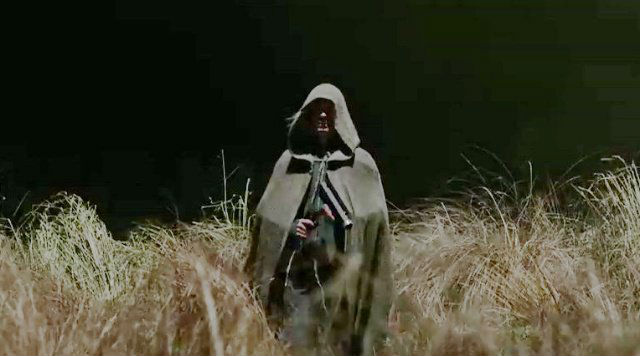 If we look at David from PROMETHEUS to ALIEN: COVENANT, we see a gradual shift from David’s status as the Romantic hero to Romantic villain. His separation from society has now defined his rage. Instead of yearning to be part of humanity, he wishes to replace them. Isolated on the planet of the Engineers, David is left to slip into madness.

David truly becomes the Modern Prometheus: stealing knowledge from the Engineers, the Gods, to create his hellish progeny. As Lucifer created the demons of Hell, David breeds the living weapons of the Engineers until they took the form of the Xenomorphs we all recognize.

The parallels between David and the Romantic heroes of FRANKENSTEIN and PARADISE LOST are explicit in COVENANT. There are obvious allusions to both works, but David’s characterization mirrors both Lucifer and Frankenstein’s Monster. Allusions such as, where Frankenstein’s monster sought companionship, David seeks to outdo his creators. He yearns to create something better than humanity. David may be the Creature, but he sees himself as Dr. Frankenstein.

CLICK: The ALIEN franchise is dark, terrifying, but deeply feminist. Find out why!

In fact, we get to truly see the relationship between David and his creator for the first time in ALIEN: COVENANT. The film opens on the day of David’s creation. Peter Weyland welcomes his artificial son into the world by testing his ability to identify pieces of art and his skill with piano. David ends up taking his namesake from Michelangelo’s statue of David. Weyland seems like a benevolent father figure until he acknowledges that someday he will die. In response, David reminds Weyland that his artificial body will live on long after his “father’s” death. Weyland coldly demands David pour him a cup of tea, beginning David’s life of servitude.

The scene is a simple one, but it spells out the years ahead for David before the events of PROMETHEUS. He is the superior being trapped as a servant to those who are inferior. Despite his change from misunderstood to an all-out monster, David still maintains Romantic qualities. In his piece on Romantic heroes (“Tirso, Moliere, and Byron: The Emergence of Don Juan as Romantic Hero”), critic James D. Wilson addressed the role of morality for the Romantic. Wilson states:

“Each of the Romantic heroes rejects established laws, norms, and conventions…forced to make the self the center of existence.”

The Romantic hero values the self above all. It’s appropriate that the only crew member of the doomed Covenant ship that David tries to reach out to is Walter, their Android. Further emphasizing the self, Walter is a later model of David and therefore his doppelganger. David tries to share with Walter the power of music and imagination, but Walter reveals that later models are not able to create.

Humanity is threatened by David’s capacity to imagine. If humanity’s creations begin to create, begin to become Gods themselves, what happens to human beings?

“I was benevolent and good; misery made me a fiend.” 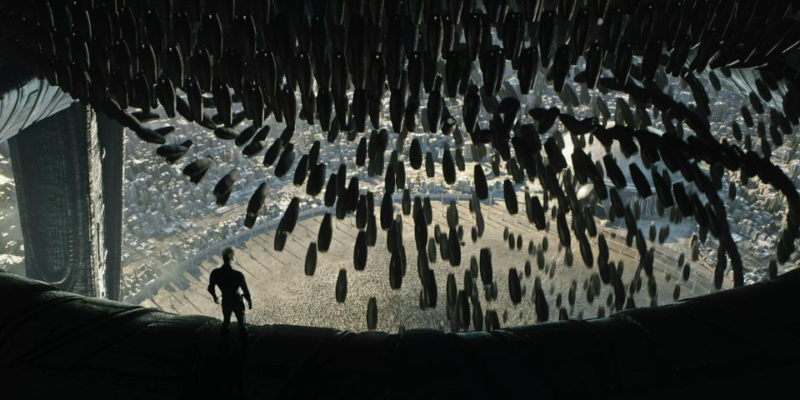 Wilson further explains that the Romantic hero has its own perceptions of morality. He points to Immanuel Kant’s observation that “…sin consisted precisely in willingly excepting oneself from universal ethical norms.” The Romantic hero is not only removed from society but also society’s ideas of right and wrong.

David pushes this newfound sense of morality to the point of genocide. ALIEN: COVENANT reveals that, prior to the events of this film, David wiped out the entire population of Engineers living on the planet he calls home. In spite of his artificial nature, David still carries the human capacity for spite and rage. In killing the Engineers, he kills the creators of mankind, and by extension, fulfills the Oedipal desire that he was denied to slay his father.

The terrifying thing about David is that he is what happens to a human being raised without love. In man’s creation of David, we created our destruction in the form of the Xenomorph. We created something that could look back at us and hold us in contempt. We created something with humanity’s capacity for creation, but without its ethics. One can hardly blame David for his God complex. He is simply following his programming.

What keeps David from being truly irredeemable is his genuine love for the Xenomorphs. So much so that the only thing that break’s David’s calm demeanor is the death of a Xenomorph. He knows what it’s like to be abused by your creator and he does not want to do the same to his creations.

CLICK: For more insights on the tragic monsters of Romanticism, check out our Halloween series!

“Look upon my works ye mighty and despair.”

David’s bizarre connection to the Xenomorphs is equal parts terrifying and fascinating. His parental concern for these beasts adds a new artistic layer to the classic monster. In explaining the origins of the Xenomorph, Ridley robs them of their mystique. Once a thing can be understood, it is no longer frightening. The knowledge of David’s origin gives these creatures an interesting new wrinkle. Humans created a being with God-like power, David, but provided it with no moral compass. In scorning David, mankind becomes responsible for the genesis of the Xenomorph.

The tragedy of David and the tragedy of all Romantic heroes is how avoidable his circumstances were. David was a child of humanity that was neglected and abused. In turn, David lashed out with the same cruelty he was shown. ALIEN: COVENANT’s most chilling scene does not feature one of the Xenomorphs. Instead, it’s David, posing as Walter, fooling the remaining crew of the Covenant. Believing him to be Walter, the crew returns to their hypersleep, giving David control of the ship.

David enters the chamber containing the embryos to populate the Covenant’s destination. David regurgitates a pair of facehuggers encased in glass, like a mother hen laying her eggs. He places them side-by-side with human embryos and walks off to survey his new subjects: thousands of sleeping humans.

The Romantic hero has become a Romantic villain. The servant has become the master, ready to subjugate those who kept him chained. The most unsettling part is that sinking feeling that maybe those human beings, after all the abuses they’ve committed, deserve what’s coming to them.