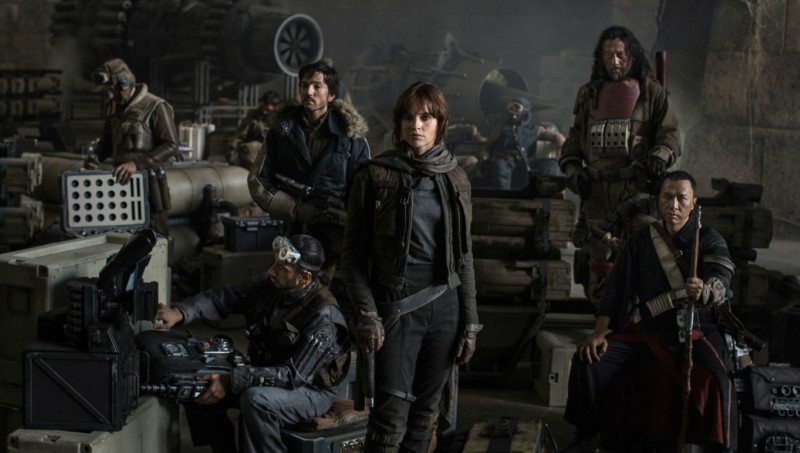 History raises up the names of only a select few in the aftermath of war. We learn the names of the generals and presidents, the leaders and the despots who fought and shaped the world. What we forget are the names of the men and women who gave their lives for their country; the nameless masses whose sacrifices reinforced the foundation of societies and enabled them to exist in peace. It is those people, the forgotten stalwarts of freedom, that ROGUE ONE pays homage to. While most STAR WARS films are operatic sci-fi fantasies, Gareth Edwards’ ROGUE ONE is more interested in the ordinary people, alien and otherwise, who populate the Rebel Alliance. These are the people with no grand adventures, “sorcerer ways” or “ancient weapons” by their side, they are the people who fight for the rebellion out of a sense of duty, rather than destiny. ROGUE ONE portrays the other side of the great STAR WARS conflict, giving the idea of the Rebel Alliance a more nuanced portrayal, and in the process, the film returns a concept that has been missing from blockbuster films for some time: genuine stakes.

CLICK: Want to know the best STAR WARS comics? Check out our ranking!

When looking at a juggernaut film franchise like STAR WARS, it’s safe to assume that nearly every major character will be safe from serious harm. STAR WARS especially has a tendency to make even the most minor of characters someone significant in the Extended Universe canon. However, when Kathleen Kennedy announced that ROGUE ONE would not be getting a sequel, it became clear that director Gareth Edwards would lean into the tropes of the “Men on a Mission” films like THE DIRTY DOZEN or SEVEN SAMURAI, namely the fact that many of the characters would likely not survive to the end credits. When the filmmakers chose to keep ROGUE ONE as a self-contained film, they immediately make the question of “will these characters survive?” a legitimate question rather than a toothless way to create drama within the film. 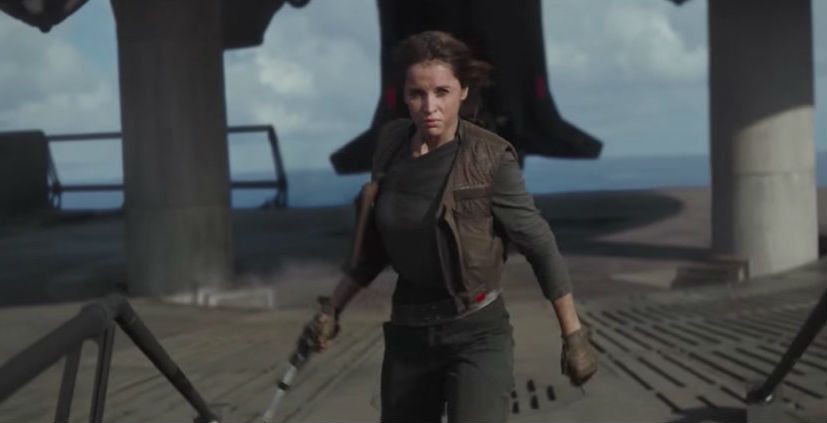 The film seamlessly fits into the timeline of STAR WARS some time after REVENGE OF THE SITH but only a short period of time (possibly days) before A NEW HOPE. Jyn Erso (Felicity Jones) is recruited by the Rebel Alliance in the battle against the Empire because of her connection to extremist Saw Gerrera (Forest Whitaker) and her relation to Galen Erso (Mads Mikkelsen), a scientist who worked on the Death Star. Jyn starts her arc in a very similar place as Han Solo in A NEW HOPE. She is a fugitive with more interest in surviving than involving herself in a war. Jyn’s cynicism can be traced back to her father abandoning her, with another abandonment to follow in her adolescence when Saw leaves her to protect her from being used as leverage against her father. As a reaction to this constant rejection, she chooses to abandon all political ties completely. It isn’t until she learns that her father left her to place a weakness within the Death Star, the infamous womp rat-sized shaft that Luke bulls eyes at the end of A NEW HOPE, that she decides to re-enter the fold and ensure that the Rebellion discovers the Death Star’s weakness.

CLICK: Check out our review of Marvel’s STAR WARS event VADER DOWN

If that sounds like a lot to take in, that’s because it is for the first 30 minutes or so of the film’s run time. We are introduced to Jyn’s entire backstory along with the introduction of new planets and five brand new characters to the STAR WARS lore. Credit must go to screenwriters Chris Weitz and Tony Gilroy for keeping all of these plates spinning even when they begin to lag a bit, along with John Knoll and Gary Whitta who had a hand in crafting the film’s story and its distinct characters. In fact, it’s those distinct characters that make ROGUE ONE’s powerful conclusion so effective and make those aforementioned stakes mean so much. Felicity Jones brings an expected level of spunk and grit to the role, but in the scene where she watches a hologram message from her father, Jones’ restrained vulnerability reveals so much about her character with nothing but her face. She brings incredible acting skills unprecedented in the STAR WARS franchise to one just one brief scene. 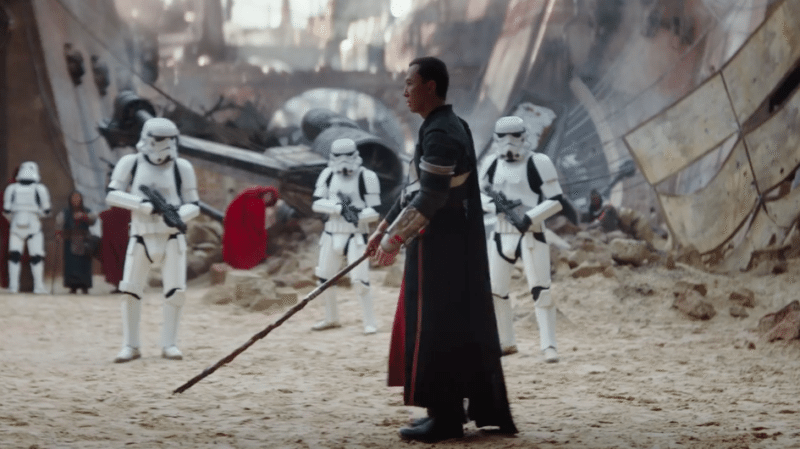 Rounding out Jyn’s rag-tag band is Captain Cassian Andor (Diego Luna), a Rebel spy who is willing to do anything in the name of the Rebellion. Chirrut Imwe (Donnie Yen), a blind advocate for the Force and his mercenary friend Baze Malbus (Jiang Wen) who both bring a unique religious perspective to the series’ famous all-powerful and binding force. K-2SO (Alan Tudyk) fulfills the archetype role of snarky droid, albeit a reprogrammed Imperial droid, for this installment, but the character’s blunt, morbid sense of humor provides new shades to the role a droid plays in STAR WARS. Also defecting from the Empire is Bodhi Rook (Riz Ahmed), the desperate pilot trying to redeem himself for his role in the subjugation of the galaxy. It may seem redundant to name each of these characters, but every actor brings a ton of heart to their roles. Each character feels unique and fully lived in, despite some being criminally underutilized in their screen time. Donnie Yen especially makes an impression as the faith-filled Chirrut, whose repeated mantra “I am one with the Force, the Force is with me” is destined to be added to the canon of iconic STAR WARS lines. The care made in bringing each character to life makes the impact of the final battle all the more devastating.

The choice on the part of the film’s creative team to remove the mystical powers of the Force and the Jedi completely from the film is an effective one. With the removal of these fantastic elements, the film manages to ground itself even in a universe with blasters and planet-sized space stations. Gareth Edwards’ same sense of visual awe that he displayed in MONSTERS (2010) and GODZILLA (2014) is on display here, giving a sense of grandeur to the classic starships, but also giving a keen visual sense to the look of the planet-based action. It’s difficult to ignore the striking similarities between Jedha, the Imperial-occupied holy land of the Jedi, and the real world conflict between Israel and Palestine. Not to mention a Rebel ambush on a Stormtrooper patrol is certain to raise eyebrows in its parallels to attacks on American soldiers in Afghanistan and Iraq. 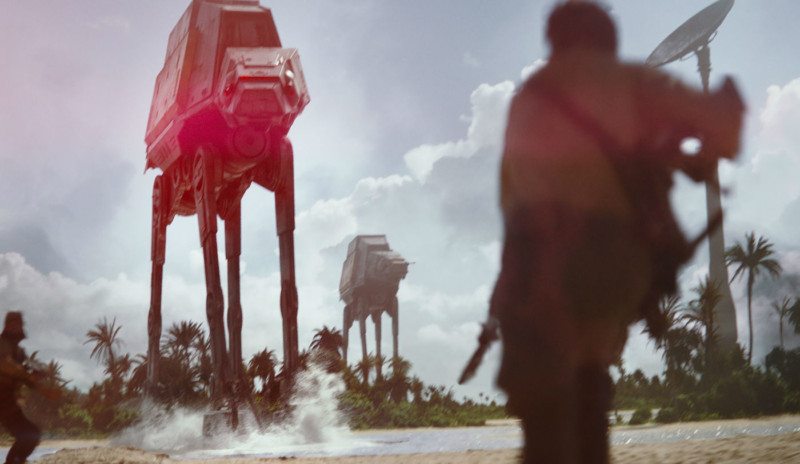 This appropriation of war iconography is certainly not new to STAR WARS. Despite what dumb neo-Nazis on the internet are just realizing, the Empire has always been a sci-fi reinvention of the Third Reich, and it’s not a stretch to see parallels between the guerrilla tactics of the Ewoks in RETURN OF THE JEDI as an allegory for the battle strategy the Viet Cong used during the Vietnam War. Edwards’ visual shorthand to compare the Rebels to these forces that fought against American troops in various conflicts provides a new depth to the typical black and white Rebel Alliance conflict. We are never asked, justifiably, to sympathize with the Imperials, but ROGUE ONE does provide an uglier view of the Rebellion. When we first meet Cassian, he kills an informant who can’t physically climb a wall in order to make his escape, rather than risk capture from the Empire; later in the film, he is tasked with assassinating Jyn’s father rather than rescuing him as promised. Saw Guerra’s forces attack Stormtroopers in Jedha while surrounded with innocent civilians (Jyn scoops up a screaming child away from the crossfire of blasters in one of the film’s more harrowing moments). When Jyn confronts Cassian about his deceptions in regard to his true mission, he rebukes her previous apathy to the cause of the Rebellion. ROGUE ONE is a movie that criticizes Jyn’s inaction in a conflict as much as it does the unscrupulous efforts of the Rebels. It’s a story telling choice that moves the story away from the romantic morality of the original STAR WARS films, but makes the movie all the more compelling for it.

The reality is that we’re going to be getting STAR WARS movies nearly every Christmas for who knows how many years. Diminishing returns are likely to set in, and it’s possible some of the sheen of STAR WARS could begin to rub off. However, ROGUE ONE shows that the creative heads of Lucasfilm are willing to take more creative storytelling risks. The dramatic final act of the film, in which our heroes sacrifice themselves for the greater good of the galaxy one by one, is a hefty gut-punch for this series of films that hasn’t been seen since the end of REVENGE OF SITH. We all knew Anakin would eventually return to the light by the end of RETURN OF THE JEDI, but the tragic finale of ROGUE ONE provides a painful shot of drama not typically seen in modern American blockbusters. The final sequences alone make ROGUE ONE a worthy entry into the STAR WARS saga and a sign of new hope for the future adventures in a galaxy far, far away.