In 1973, the very first theatrical production of THE ROCKY HORROR PICTURE SHOW ran in a tiny room reserved for an experimental theater upstairs at the Royal Court Theater in London. Exactly one year before this production, the first gay pride parade was held in Britain, inspired by the 1969 Stonewall Riots in New York City. The Stonewall Riots, for those unfamiliar with the term, were a series of activist protests that occurred after police raided a gay bar called the Stonewall Inn in order to arrest as many LGBT people as they could. At the time, all gay bars were underground, and police raids were common. Arrests were easy – the sodomy laws of the U.S. outlawed any sex between people of the same gender. In addition, there were rules which required everyone to wear at least three articles of clothing that indicated their assigned sex at all times.

Stonewall was just the next stop in a long line of arrests, and it was transwomen of color who decided now was the time to fight back. Two trans activists, Marsha P. Johnson and Sylvia Rivera, led the riots and helped form some of the first LGBT activist groups in America (the Gay Liberation Front and the Street Transvestite Action Revolutionaries). However, over time, the LGBT movement began to appeal more and more to the straight mainstream and focused in on monied gay, white, male issues (e.g. marriage equality) since they’d be more palatable to the general public. And so, white gay men basically took over everything and kicked transwomen of color to the sidelines. In fact, Sylvia Rivera was banned from many of the organizations she helped found because she was “too radical.” 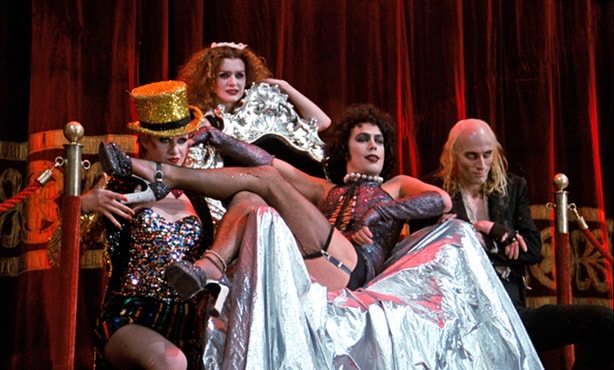 This is the foundation for THE ROCKY HORROR PICTURE SHOW. The musical and its subsequent film production occurred at a time where all LGBT identities were still criminal, but where rich white gay men were just beginning to take control of the movement.

One can clearly see this within the film itself. The conventional 1950s straight couple, Brad Majors and Janet Weiss, enter a spooky mansion where glam-rock, queer, sex-positive, polyamorous scientist Dr. Frank-N-Furter resides. The story portrays their interactions as a mock-horror movie, since, to Brad and Janet, Dr. Frank-N-Furter’s world is inherently evil and dangerous.

However, the entire speaking cast is white, all homosexual encounters occur between male characters, and Frank-N-Furter uses he/him pronouns while calling himself a “transvestite” and “transsexual,” muddling a number of different marginalized identities in some kind of bizarre transphobic stew.

Nowadays, pride parades are very different than the ones that poor, criminalized, queer people started in 1970. The pride events of the 2010s have floats for Coca-Cola and Nike. Marriage equality is legal nationwide. Gay men can serve in the U.S. military. And we use treatment of gay people as justification for imperialist wartime ventures into the Middle East and African nations. Meanwhile, every year in America, transwomen of color still get murdered at alarming rates. Queerness in general is no longer worth jail time, but nonwhite queer and trans identities are still deemed vile.

READ: Tired of seeing trans villains? Want a transgender superhero? ALTERS is the comic for you!

This is the cultural context for the direct-to-TV Fox remake, THE ROCKY HORROR PICTURE SHOW: LET’S DO THE TIME WARP AGAIN. Trans issues are now a separate venture, one that must be handled far more carefully than the first time around. As a film, there are, of course, many flaws in the remake, such as the removal of most of Eddie’s backstory and the use of an awkward framing device. But this article isn’t about that. I’m here to talk about Laverne Cox. 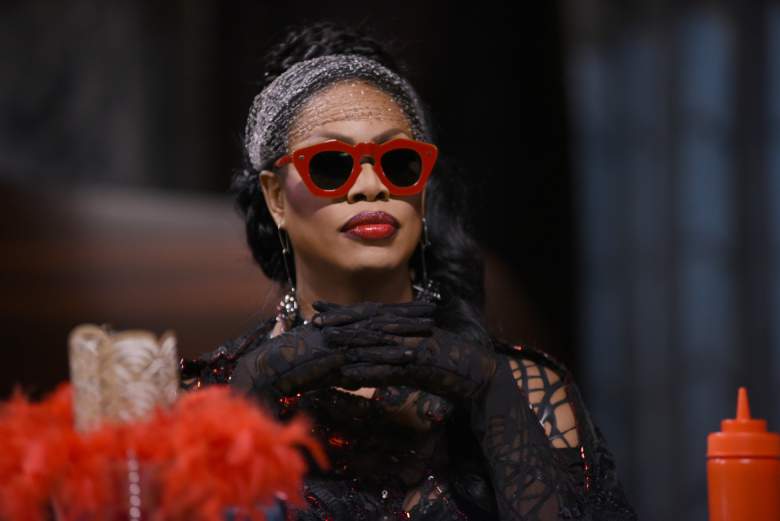 Laverne Cox plays the Dr. Frank-N-Furter of the remake, and she is a gift to this film. For those who don’t know her, Cox is a black trans actress famous for her role as Sophia Burset in the incredibly lesbian Netflix series ORANGE IS THE NEW BLACK. She is one of the first trans performers to play a trans character on television. Additionally, she uses her fame to advocate for issues affecting black and Latina transwomen and enjoys discussing how transphobia, racism, classism, and patriarchy all influence each other.

She does all this at a time when directors still usually cast cisgender gay white men to play transwomen in film. This seems to be a trend especially among castings of Dr. Frank-N-Furter; Tim Curry, a cisman, originated the role, and that’s how directors and fans tend to imagine the character. In fact, producers of the remake originally wanted to star Adam Lambert, yet another white (gay) cisgender man, as the famous scientist. Thankfully, however, Lambert turned it down and suggested Laverne Cox instead. And although the remake sticks very closely to the original film’s script, casting a black trans actress as the lead makes a vast difference in how the entire movie plays out.

For instance, in any incarnation of ROCKY HORROR, both Janet and Brad lose their virginity to Dr. Frank-N-Furter on the same night, and their character arcs hinge upon their attraction to the mysterious scientist. And when a man portrays Frank-N-Furter and plays up a male interpretation of the character, it has an effect on Brad and Janet as well. Usually, when Janet interacts with Frank-N-Furter, she is shocked at having sexual urges in the first place, because Good Women Don’t Do That. Her character arc is about changing from The Virgin archetype into The Whore as she reclaims her sexual agency. However, it is an entirely heterosexual agency, focused exclusively around male characters.

In the 2016 remake, not only is Janet dealing with this dichotomy, but she is also dealing with being incredibly attracted to a woman—Dr. Frank-N-Furter. Here, Janet’s character changes in the mansion far more than in the 1975 version. In this instance, she becomes sexually awakened after having lesbian sex for the first time. It may have been taboo for her to actively seek out men to have sex with, but she’s still expected to have sex with men eventually. And from there, she’d have some nice little Caucasian babies and be a good middle-class wife. But sex with women, especially black transwomen, is supposed to be completely off the table. In this way, Janet is just as out of her depth as Brad is. 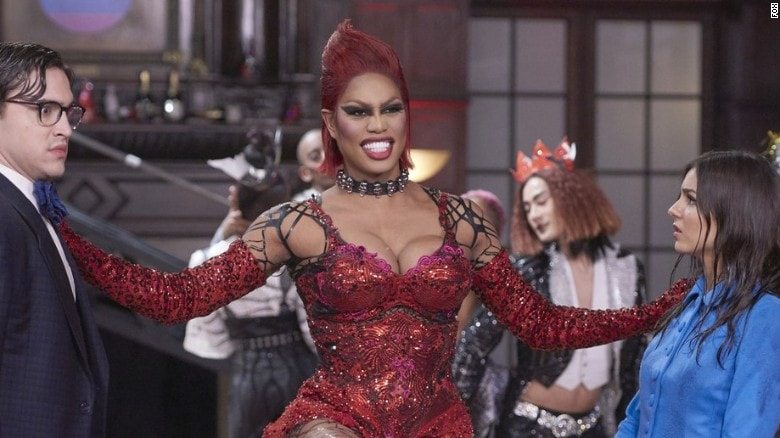 Brad’s story arc changes, too. In one scene, Dr. Frank-N-Furter pretends to be Janet in order to seduce Brad. Upon realizing who is actually in bed with him, Brad exclaims, “I thought it was the real thing.” In the context of the original, Brad is saying that sex with a woman (Janet) is “real” sex and any attraction he has for the male scientist is not as legitimate. It reads as Brad devaluing gay sex and is a big part of an arc where Brad starts to come to terms with his attraction to Frank-N-Furter.

In the remake, when Brad says the same line in response to Laverne Cox posing as Janet to seduce him, it has completely different connotations. Here, Brad’s saying he thought she—Dr. Frank-N-Furter—was a “real” woman and that he doesn’t believe transwomen can be “real” women. Furthermore, the whole scene reads as a play on the stereotype of the deceitful transwoman. It’s a common media cliche where a cisgender man is about to have sex with a woman, finds out she is trans, and freaks out because she has “tricked” him into have sex with her somehow.

In real life, this is used as a defense to justify many trans murders. It even has a name: the trans panic defense, and it is used against black and Latina transwomen especially, often by former lovers or sexual partners. The fact that so many murderers can get away with this defense is a clear indication that our society is still deeply afraid of transwomen of color.

That’s one of the reasons Laverne Cox, who is black and trans, works so well in this film.

If Dr. Frank-N-Furter is supposed to represent all of mainstream America’s fears (as did Tim Curry during a time of panic towards gay men), then it just makes sense that, today, she should be a black transwoman. The character started out as a representation of criminalized identities hounded by police. White gay men might not experience that as much as they used to. However, police can still shoot unarmed black Americans in public and get paid leave and fan-mail. As a satiric figure—a demoness who represents the demonized—this is where Dr. Frank-N-Furter must be. Not with gay white cisgender men, but with those who experience marginalization on a far greater scale.

Not to mention, this casting change emphasizes the European nature of Brad and Janet’s misogynistic, sex-phobic viewpoints. In the original film, the couple may learn to question these values, but nobody ever questions where these values come from. It is of note, then, that patriarchy was introduced to many cultures when European and American countries started colonizing. Therefore, Western conventions of gender are alien not only to the literal aliens of ROCKY HORROR, but also to many nonwhite nations.

Plus, it’s nice to have a black actress represent a rock-n-roll icon, since the African American community invented rock as a branch-off from blues. However, after the popularity of Elvis, white people decided to steal rock-n-roll along with the LGBT movement. Now, both of those movements are heavily white-dominated. I think the original creators of rock deserve to get the “Time Warp” back.

Additionally, a POC Frank-N-Furter allows for some neat directorial decisions. I definitely saw those finger snaps that the Unconventional Conventionists were doing at Frank-N-Furter’s big speech, referencing the black and queer nature of slam poetry. Slam poetry still represents a lot of the more radical parts of LGBT life that people are scared of, so the reference works very well thematically. 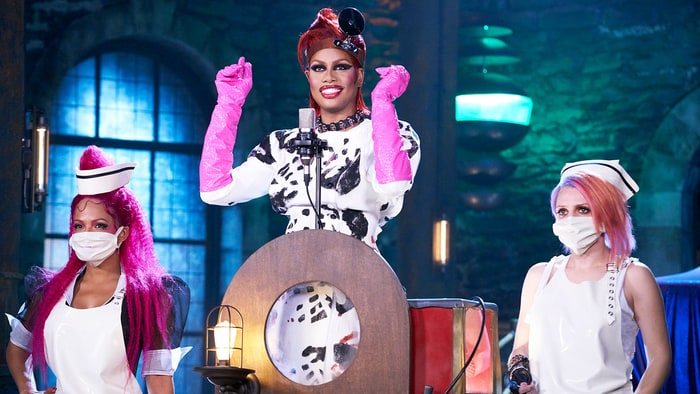 In general, I think Laverne Cox was great for ROCKY HORROR and brought a lot of the film’s themes into the 21st century. However, it should be noted that some aspects of the script definitely worked against her. Most of the lyrics of “Sweet Transvestite” do not work with a female Dr. Frank-N-Furter and unfortunately work to misgender both the character and the actress herself. If they changed “transvestite” to “transwoman” and found some way to fix, “I’m not much of a man by the light of day,” it could have been fine. But that didn’t happen.

Yet, overall, I would recommend at least one viewing of the remake. Maybe not for the rest of the cast or for the awkward directing, but absolutely watch it for Laverne Cox. She is just what ROCKY HORROR needs.