Joe Harris’ appreciation for science fiction and horror really comes through in his first issue of ROCKSTARS. Combined with Megan “Black_eM” Hutchison’s eerie and timeless art, ROCKSTARS leaves readers dying for more. Jackie Mayer, our protagonist, has a profound connection to rock ‘n’ roll. ROCKSTARS taps into our desires to unravel the genre’s age-old mysteries — Who killed Cobain? Has Paul been dead for years? Is that Gene Simmons’ real tongue? 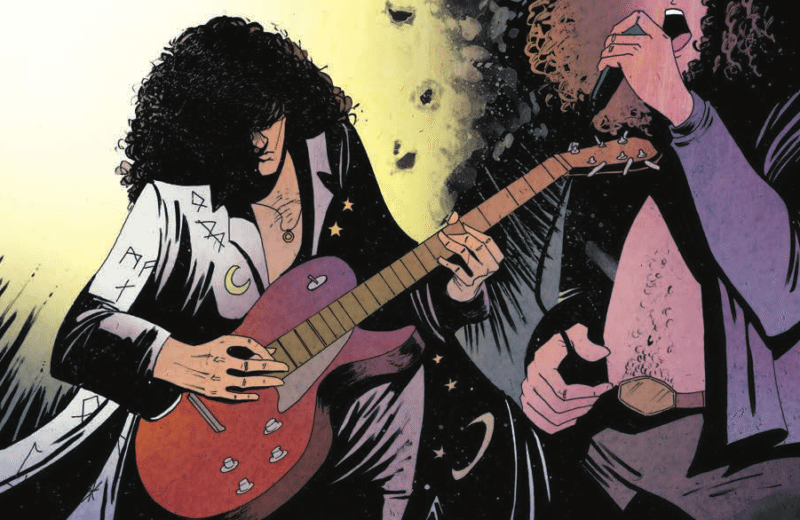 Jackie and his trusted feline cohort Skydog follow the deaths of two young Blue Rider fans. Blue Rider, an amalgamation of every band you grew up thinking was cool, appears to be far more than they seem. They are placed in the ranks of Zeppelin, the Stones, and Deep Purple, carrying that same command and mystique over fans for generations. Dorothy Buell, a young renegade investigative journalist, provides great contrast to Jackie’s character. Jackie, for all that he has on his shoulders, is reserved and somber, where Dorothy is bite and beauty. Within panels of her introduction, she already commands control of the investigation and readers’ hearts, even if Skydog doesn’t agree. Together they truly embody the rock n roll spirit.

READ: Interested in music and comics? Check out our review of WHO KILLED KURT COBAIN?

Harris does an incredible job of placing the reader in a modern day ’70s music scene. The premise, two kids and a cat chasing after ghosts, initially seems almost Hanna-Barberaesque. Far from that, readers are left with this overwhelming nostalgia to revisit the musical days of yore. Hutchison’s art is reminiscent of old venue halls, bar walls plastered with posters, stickers, and fan graffiti. She is able to capture the mystery, the horror, and the essence of Harris’ writing in her dark style and command of ink.

ROCKSTARS is for anyone who has an appreciation for good music, good mystery, and good science fiction. Harris is a seasoned sci-fi and horror writer, giving us GHOST PROJEKT, SPONTANEOUS, and seasons 10 and 11 of THE X-FILES. No stranger to the dark genres, Harris has also written the ongoing ALICE COOPER comic book series. Hutchison, having worked in the film industry for over 10 years, is now a full-time illustrator and self-proclaimed “Gothic Astronaut.” Hutchison produces regular incredible cover art for Boom! Studios, Valiant Entertainment, and Black Mask Studios. Harris and Hutchison make an incredible pair to deliver this story.

Stay up to date with Joe and Megan on their respective social media accounts. ROCKSTARS #1 comes out on December 14, 2016!