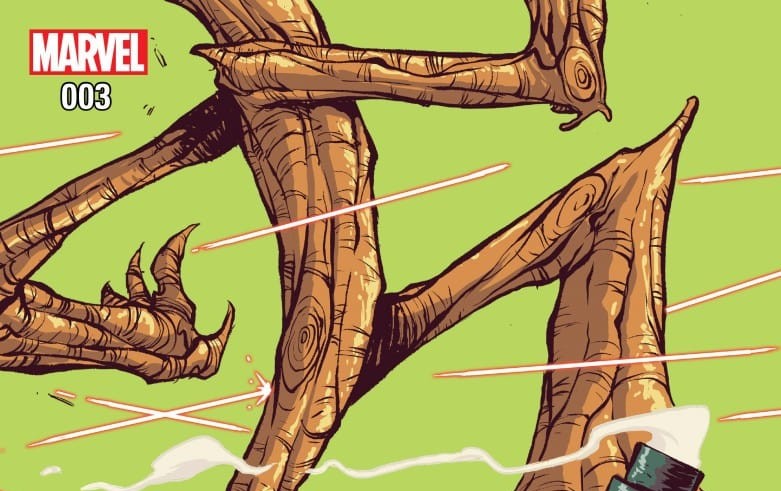 ROCKET RACCOON AND GROOT is such a great read because it sticks to key elements: fantastic scenery, good character dynamics, and no fear of being silly. The art helps to strike the balance between comical moments and serious tones of the story through use of grand scenery and intense color. Rocket’s and Groot’s relationship is as strong as ever as they embark on another adventure (which Rocket totally had a plan for, by the way).

Rocket and Groot have been missing and presumed dead by the Guardians of the Galaxy. Groot has been transported away by a wormhole with mysterious clues etched into his body. These clues lead him to Rocket, who is posing as the evil Rakzoon. Last issue, Rakzoon sentenced everyone to death. This issue clears up the dilemma as a “by-product of the universe’s greatest troll,” as Rocket so eloquently puts it. The two then make their daring escape, a.k.a. stealing the bad guys’ guns and running as fast as they can. 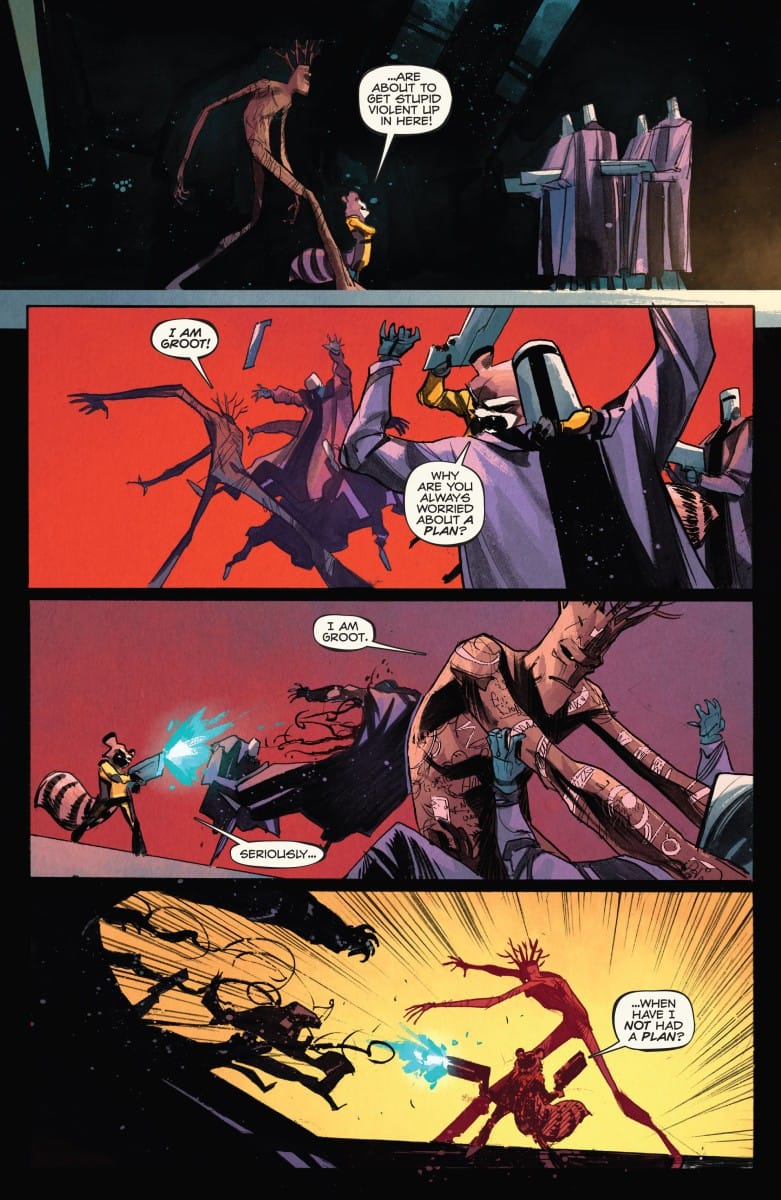 I love that Rocket and Groot are still conversing in this scene despite opening a can of whoop-ass at the same time. It shows their deep bond and that this isn’t the first time they’ve ran and fought for their lives. You’d think that Groot’s only dialogue being “I am Groot” would impede dialogue, but it doesn’t. I always like imagining what Groot is saying. It engages me. In a way, Rocket becomes a translator, which makes their dynamic more fun and compelling to watch.

READ: Need to get caught up? Read our review of ROCKET RACCOON AND GROOT #1!

The art is also breathtaking. It really uses the medium of comics well by giving interesting panel transitions backdropped against breathtaking scenery. This reminds the reader of the unique setting in a way that isn’t overpowering. I was a little upset learning that Skottie Young doesn’t draw this arc since I love his art so much, but Filipe Andrade does a great job. He isn’t afraid of being colorful and uses it to change up the tempo. Plus it gives us something gorgeous to look at. Isn’t that what art is all about? 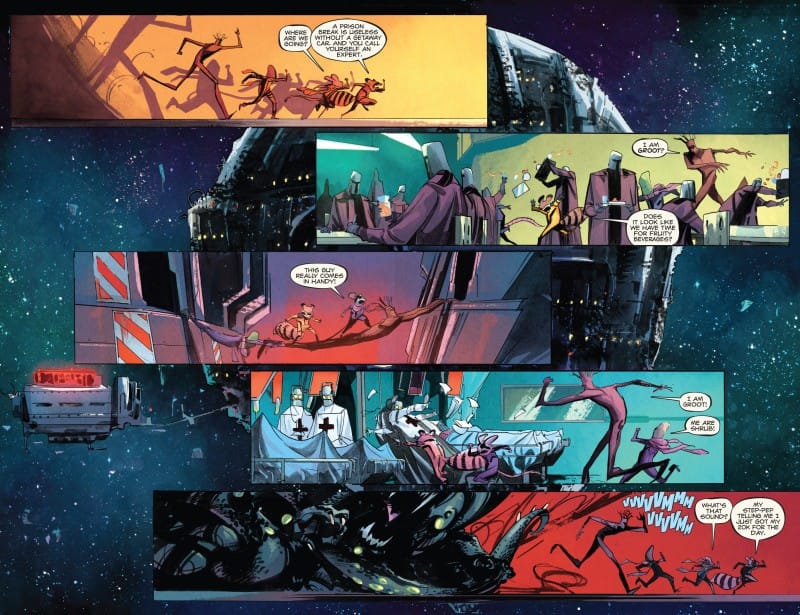 The use of color is intense during fight scenes. Red tones depict the rage that powers Rocket’s punches and the team’s desperate dash to freedom while humor helps to balance this intensity and tension. The best example of this is when Rocket steals Pocket Possum’s ride. It also shows masterful use of color and humor by intensifying the action with red and easing tensions by snapping back to normal colors to give the reader permission to laugh at Pocket Possum’s wedgie. 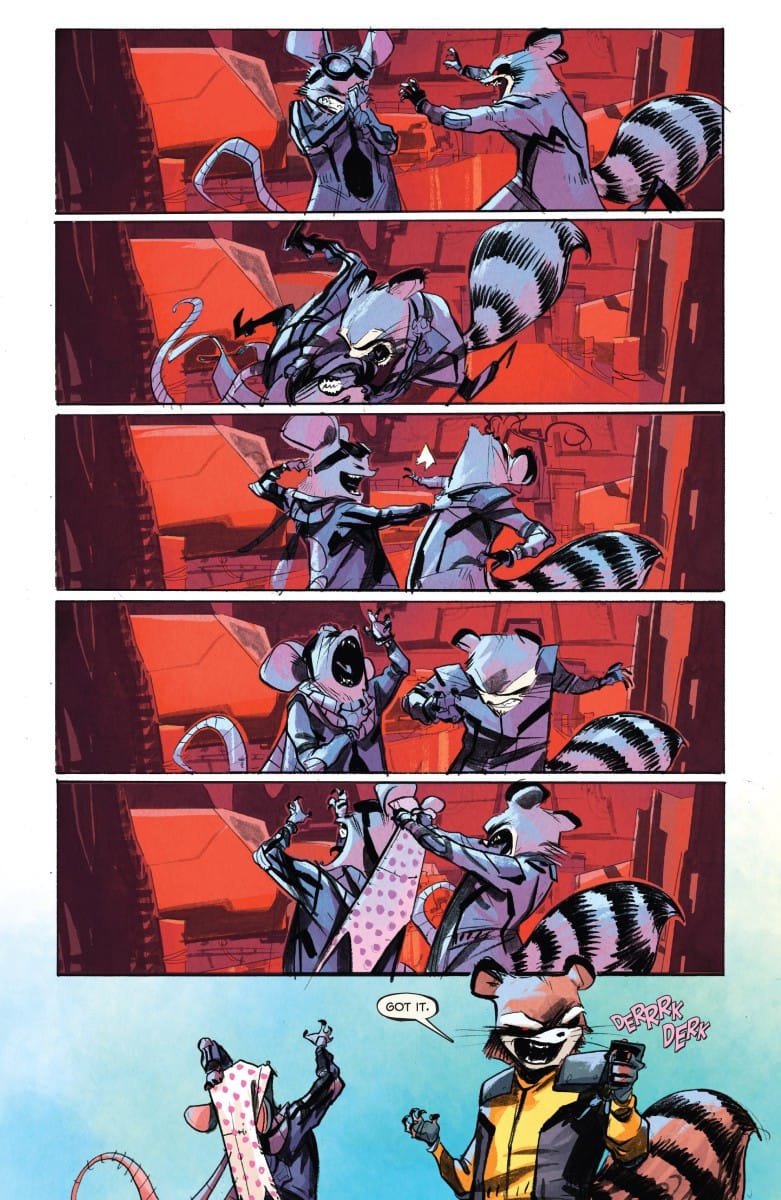 I love that this issue doesn’t take itself too seriously. It opens itself up to a more slapstick- and gag-oriented sense of humor. It’s always nice to see creators trying new things, and I think this sense of humor is really suited to ROCKET RACCOON AND GROOT. At times, the series feels like a buddy comedy. In space. With lots of guns. But then again, that’s why I love reading it.

READ: Ever wonder what the rest of the Guardians are up to? Find out in our review of GUARDIANS OF THE GALAXY #1!

Basically, even if you haven’t seen the GUARDIANS OF THE GALAXY movie, this series is great for people who loved Rocket and Groot. I really like where it’s going, and I can’t wait to read more.