Rocket and Groot are dead. What? Should I have warned you? It happens on the very first page people! If you remember, back in SECRET WARS #1 Rocket and Groot bought the farm, but now that ALL NEW ALL DIFFERENT MARVEL is in full swing, ROCKET RACCOON AND GROOT #1 appears to be dealing with what happens next and, I’m assuming, the pair’s resurrection.

READ: Go back to where it happened with our review of SECRET WARS #1!

I was a big fan of both Rocket and Groot’s independent series, so it’s great to see the creative team of Skottie Young and Filipe Andrade follow Rocket to his new book. I did find Andrade’s art initially jarring (Andrade took over illustration duties from Young for issues 7&8 of ROCKET RACCOON), as I was expecting to see Young’s style blazing brightly from the page, but after the initial shock I found Andrade’s art to suit the story and the characters well. He brings a more refined and slighty darker tone to the book while still having a pop similar to Young’s art.

Clearly I wasn’t the only one who felt this team dynamic worked, as now Young and Andrade’s are back to tell the story of Pockets and Grub! Who? After destroying the funeral caskets of Rocket and Groot, Pockets and Grub, a duo similar to our dead heroes, meet a mysterious stranger at Caxdore bar. There they are hired to deliver a package to a Lord Rakzoon. A package somewhat familiar, but covered in mysterious markings. 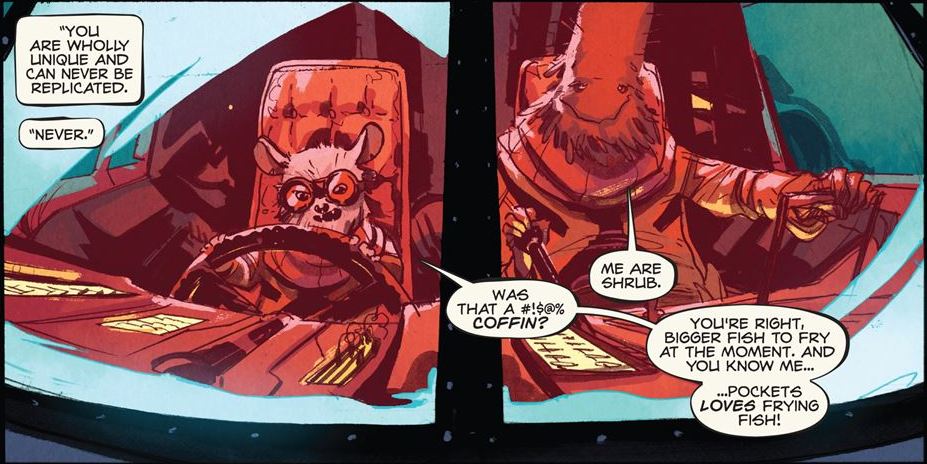 READ: Check out our review of SECRET WARS: SIEGE #1 with art by Filipe Andrade!

Filipe Andrade does a fine job making these characters his own, designing Pockets and Shrub to feel like a homage to Rocket and Groot more than a simple rip off. With Jean-Francois Beaulieu on colors, we’re treated to a trip through some of the darker corners of the Marvel Universe’s cosmos. This universe feels old, dirty, and lived in. The characters are colorful and have weight to them. The action, whether it’s two space ships duking it out or a giant tree facing off against Lord Rakzoon’s guards, is clear, defined, and with a lot of energy. You can feel the whoosh of the spaceships as they fly by, or hear the creak of the giant tree as it stretches out its limbs to grasp at Lord Rakzoon. 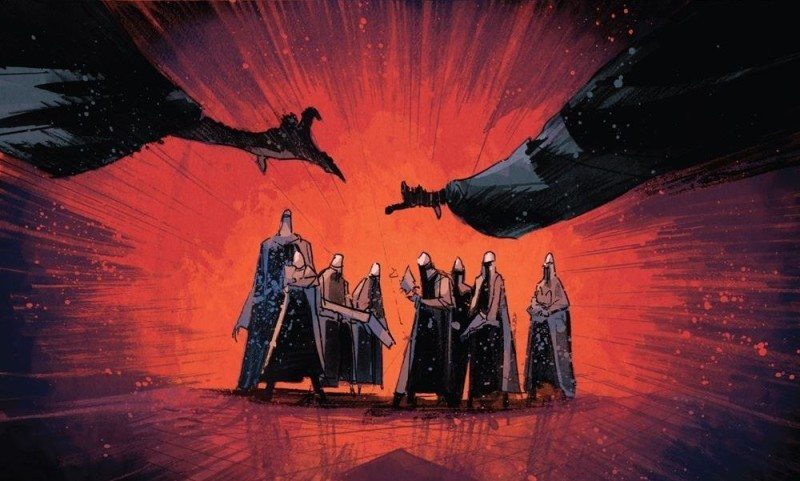 LISTEN: Did you know this series’ Assistant Editor is ComicsVerse Podcast contributor Kathleen Wisneski? Check out those podcasts here!

Young writes a nice, tight issue and sets up a mystery that will be fun to tag along with. His dialogue is snappy, and suits the tone of the characters. My only small gripe was how the rest of the Guardians react to the deaths of Rocket and Groot. I’ve never known Flash Thompson or Ben Grimm to be flippant about death and it rang a bit hollow with me. However, I was able to shake that early misstep off as the story moved away from the Guardians and into an exciting adventure. For a first issue, ROCKET RACCOON AND GROOT #1 is a strong start where (almost) everything comes together.