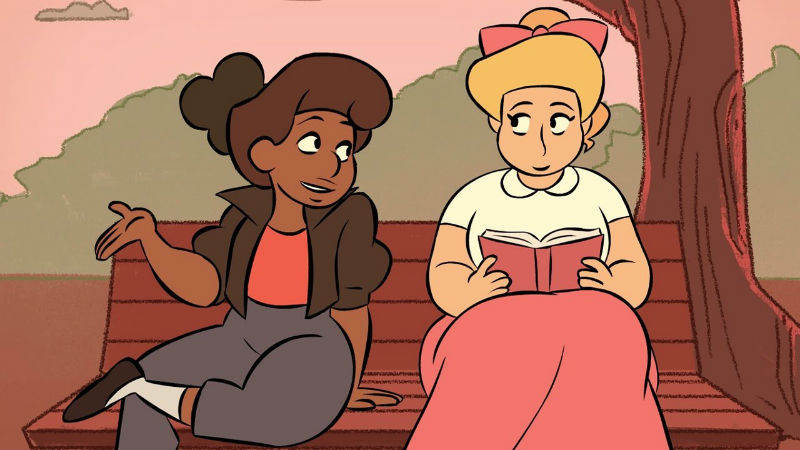 READ: Want more LGBTQIA+ representation in comics? So do we! Here are our recommendations!

When it comes to representations of the 1950s, everyone automatically thinks of GREASE. The film is a world made of straight, white couples. It is a world of camp and music that to some is wonderfully cheesy and cheerful but to others, it is too white and heteronormative (the idea that heterosexuality is the “normal” sexual orientation). However, Chesley Furedi reimagines all of that, creating one of the best LGBTQIA+ webcomics I’ve read in years. Complete with humor, romance, and a wide spectrum of diverse representation, here are three reasons why ROCK AND RIOT is a must-read:

1) All the Shipping Feels

The first comic of the series, “Love Follies,” introduces the main couple of the webcomic: Connie and Carla. Connie, the leader of the all-female Jaquettes, has a gigantic crush on her classmate, Carla. The head Jaquette attempts to woo her lady-love with various mistaken displays of “toughness” — and repeatedly fails. When she actually sits down and just talks to Carla directly, Connie succeeds in winning Carla over, starting the beginning of an adorable romance. Throughout the comic, Connie and Carla share a relationship based on mutual adoration and tenderness as seen in quiet moments of talking or kissing. Plus, Connie and Carla are an interracial queer couple, providing a wonderful breath of fresh air in an otherwise very white, heteronormative media.

READ: Check out our take on queer classic DYKES TO WATCH OUT FOR!

Their romance isn’t the only relationship in ROCK AND RIOT. Enter Gene and Clyde from the Jaquette’s rival gang, the all-male Rollers. Clyde’s general philosophy, as quoted from the webcomic’s “Cast” page, is “Cool around friends, not around crushes.” As such, he consistently demonstrates a “cooler-than-you” persona (complete with amazing hair). That is until his best friend, Gene, enters the picture. Gene has a not-so-secret crush on Clyde. A crush Clyde reciprocates. Other achingly cute romances are featured throughout the comic. Also, a variety of characters on the aromantic spectrum. This brings me to…

2) Straight, Cis, and White is the Exception — Not the Norm

The world of ROCK AND RIOT avoids compulsory whiteness and heteronormativity. Furedi illustrates a world in which various forms of diversity exist, as seen with each character. The cast of ROCK AND RIOT consists of a number of individuals of various sexual and romantic orientations, as well as gender identities and body types. Heck, the comic even features the Bandits, a school gang made up entirely of non-binary members, headed by a Latinx agender person named Ace.

Furthermore, almost every character displays some sort of intersectional identity. For example, Connie is an African-American butch lesbian while Carla is a white, plus-sized panromantic asexual girl. For Connie, Carla, and every other character in ROCK AND RIOT, their queer identity goes beyond a single, simplified category. Plus, the comic features the greatest amount of characters on the aromantic asexual spectrum that I’ve ever seen in any creative medium, with characters such as Carla, Ace, fellow Rollers Edd, and Bandit Dett. As a person who personally identifies as demisexual (someone who does not experience attraction unless they form a strong emotional connection with someone), I found this pretty refreshing. The cast list even features direct links to information on each orientation represented, allowing the reader to personally research and learn something new.

Enough cannot be said about the comic’s gorgeous artwork and hilarious writing style. Blending bright colors and clean lines, ROCK AND RIOT is a feast for the eyes. Each character has their own individual style and signature look. Whether it’s Carla’s femme beauty or the Rollers’ cool swagger, each character makes their mark on the page and in the reader’s mind.

One’s appetite for the comic only increases after reading the shenanigans these characters go through regarding school, friendship, and romance. From trying to impress the cute girl to dishing it out with a rival group, each episode of ROCK AND RIOT keeps the reader riveted. At times, though, the comic does delve into intense issues. In “Dancing Blues,” Connie and Carla attempt to go on a date at a dancing club and are told Connie isn’t allowed in due to segregation laws. Furthermore, the comic also touches upon the implied LGBTQIA+ stigma of the 1950s. In the episode “Suzy’s Dinner” Clyde says, ” I thought I was an oddball for liking dudes. But I wasn’t sure if it was possible to like chicks as well,” demonstrating internalized biphobia. Nevertheless, the comic is generally an easy-going, slice-of-life story in which queer kids can just be kids, not topical discussion points.

Final Thoughts on ROCK AND RIOT

ROCK AND RIOT is what I wish life was like sometimes. It is filled with bright colors and casual acceptance of queerness. I feel genuine tenderness for each character as they strive to be their truest self. All they want is to love who they love, be it romantic or platonic. If you’re looking for a pleasant comic filled with excellent artwork, wonderful characters, fantastic storylines, and set in a casually LGBTQIA+ environment, then ROCK AND RIOT is a good place to go.