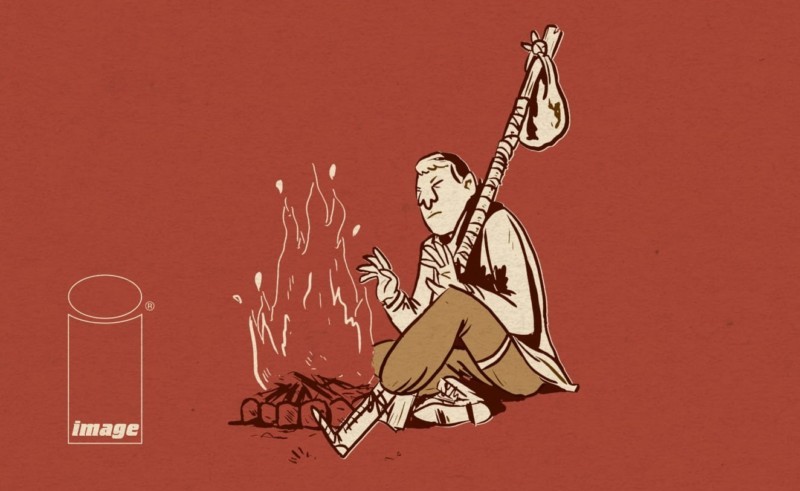 Kyle Starks is set to ignite the comic world with laughter with ROCK CANDY MOUNTAIN from Image Comics. Starks has been on a comedy rampage with Eisner-nominated SEXCASTLE and his current run on the RICK AND MORTY comic. This new adventure, filled with hobo kung-fu, will certainly continue that momentum. ComicsVerse got to talk to Starks about this wildly brilliant concept, and his answers alone about ROCK CANDY MOUNTAIN brought gut-punching giggles. ROCK CANDY MOUNTAIN will be released 4/5/2017.

READ: Our interview about the new HEAD LOPPER!

ComicsVerse: How do approach taking on both writing and illustrating, instead of just producing one aspect?

Kyle Starks: Whenever I am doing just one aspect, either writing or drawing, I still sort of approach it the same way I do the stuff I write and draw. I’m not sure I can separate it – I still do page thumbnails even when I’m not drawing.  It’s all the process of making comics! I guess, if I’m writing for someone else I don’t have to be as specific, I let them have their aesthetic “voice” as much as possible – but for the sake of comedy and action I think pacing is very important, so I still have to consider panel breakdown and layout very carefully. But it’s all the same in terms of early process.

CV: How would you describe your sense of humor for people unfamiliar with your work?

KS: Oh man, that’s a tough one. “Eisner-nominated”? No, but seriously, that’s a tough one. It’s manic but smart? I try to do everything from physical comedy to dialogue bits, from butt jokes to a little more highbrow material. Basically, I try to be as broad and as faceted as possible – I want there to be something for everyone. I’m, also, very profane. I use a bunch of them dirty words, unfortunately.

CV: What elements of your uniquely funny storytelling drive you?

KS: I try, always, to make the stories that I’d want to read and I think comics should be fun – but also smart and clever and a place you want to spend your time and money. That’s super important to me — but more than anything I want them to be fun, and for me, that means some degree of humor. 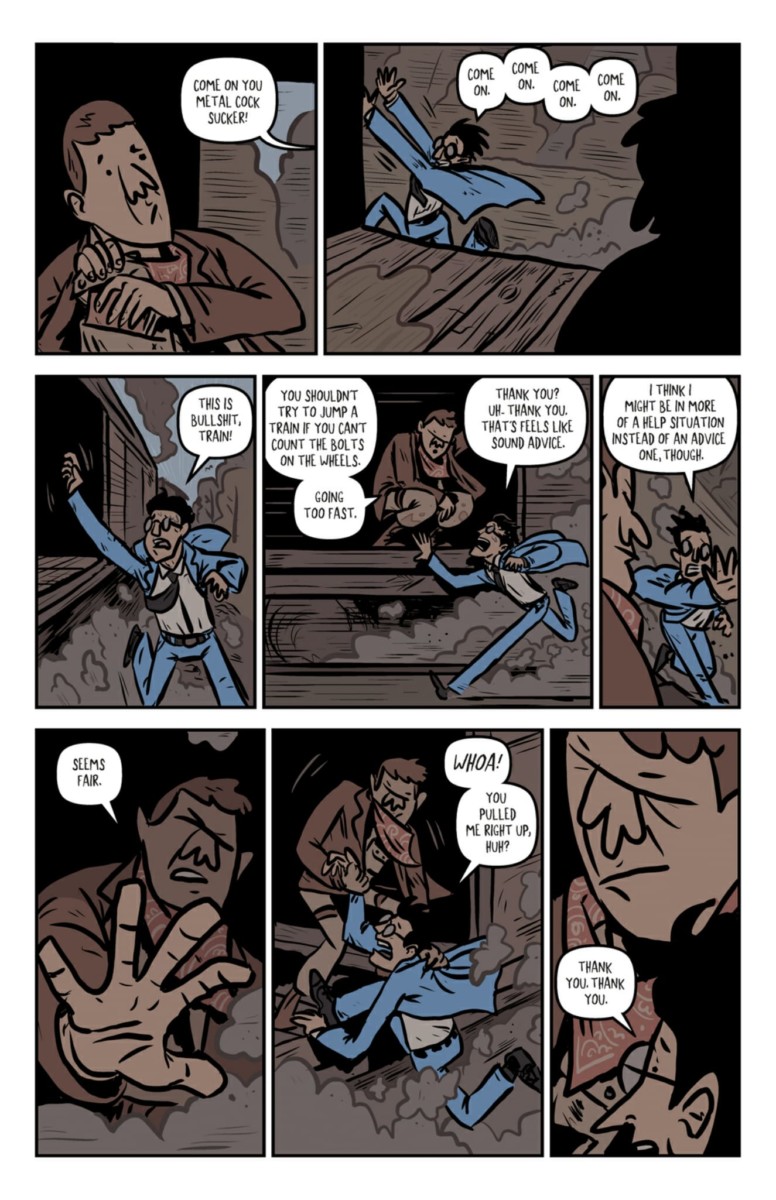 CV: What made you want to create this layered hobo underworld?

KS: I had been watching a bunch of martial arts films and came across a genre called Wuxia – which is these sort of semi-magical fight boys that tend to be these epic journeys or challenges, and I became really intrigued with the idea of doing a western version of this genre of storytelling and that led me to the ideas that compose the book. I was interested in hobo culture and history before, a passing interest maybe – but thinking about what would best be the world for this genre structure it all came together perfectly.

CV: What was so alluring about the ROCK CANDY MOUNTAIN folk tale that you decided to create your own spin on it?

KS: The idea for a fighting magical hobo story definitely came first, the song was sort of just the last puzzle piece. My friend Dr. Eric Newsom writes up a fantastic essay about not only that song and its history but the history of ugly utopias. Like I said, it was the capper on that story, not the seed.

READ: Another interview with Kyle Starks regarding RICK AND MORTY!

CV: The first issue has a multitude of elements that are going to make Jackson’s journey (the main character) challenging. How did you construct these elements? Does he have a punching limit?

CV: Pomona seems to be the naive sidekick. Is his bright blue suit a representation of this? What can we expect of him? Is he the character who has the most potential for growth?

KS: His bright blue suit is definitely indicative of how he is not a hobo yet, his clothes are clean and bright, and he’s finding himself going headfirst into a world he is ill-prepared for – he is very much naive. Pomona, like Jackson, has a lot of change coming though it’ll be far more subtle than Jackson’s – he isn’t searching for a very awesome singular thing like the Rock Candy Mountain, but he is on a journey, just a far more personal one. 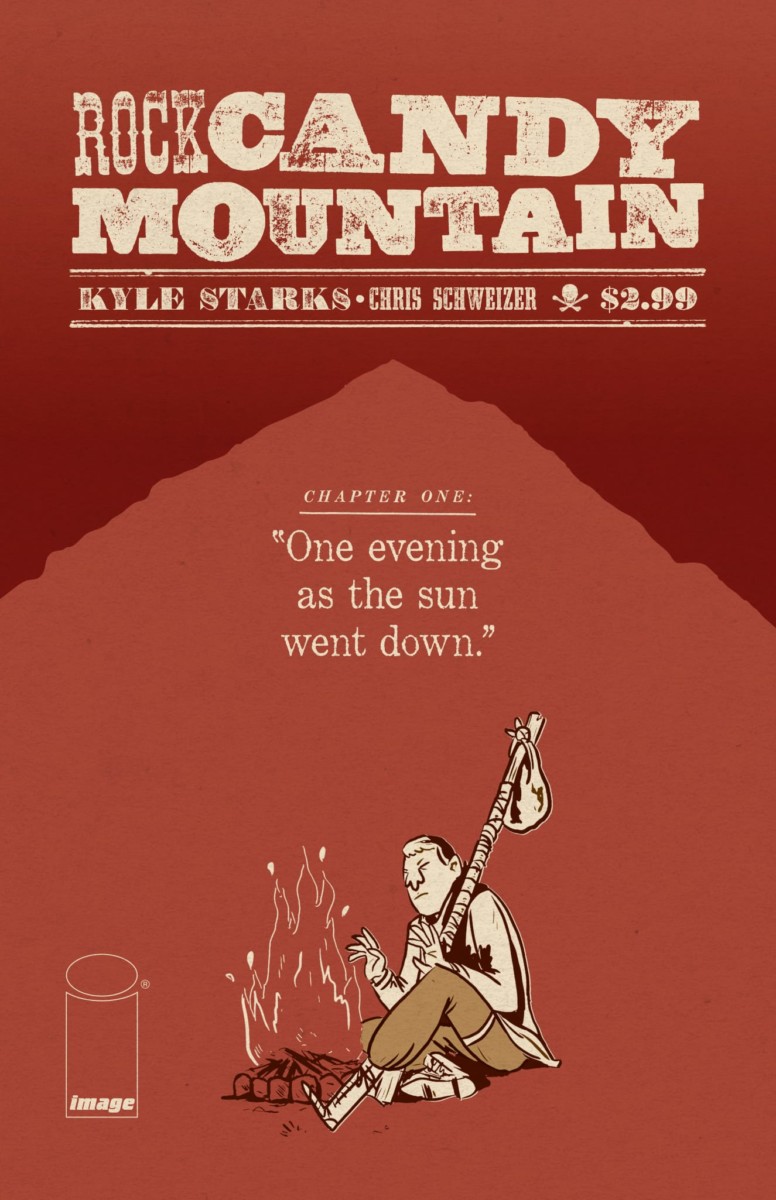 CV: What else can we expect from this series besides a budding hobo friendship and glorious punching battles from diverse groups of assailants?

For more info about Kyle Starks’ work go to his website!