Fiction set in the past has the tendency to be kind-of predictable. These narratives usually focus on middle or upper-class characters. One explanation for this might be that we don’t have a lot of information on what it was like to be poor. The elites typically produced the first-hand historical accounts. Maybe there’s simply not enough readily available information on what the lower-classes’ lives were like to write detailed fictional narratives.

However, I think historical fiction’s fascination with the upper levels of society has more to do with our general fascination with rich people. For some reason, we have agreed as a culture that being rich equates to being interesting. As someone who has always had a strong interest in counter-culture, I disagree. Some of the more interesting people I have met are as destitute as can be. And, believe it or not, alternative lifestyles have always been a thing. It’s about time we look at fictional stories told from these perspectives.

I had the privilege of reading an advance copy of Image’s new series ROCK CANDY MOUNTAIN, written and drawn by Kyle Starks with coloring by Chris Schweizer. Set just after World War II, ROCK CANDY MOUNTAIN follows Jackson, a hobo searching for the fabled Rock Candy Mountain. Along the way, he picks up a new companion and gets into quite a few scuffles. And by “quite a few,” I mean an abundance of hobo battles, so buckle up. 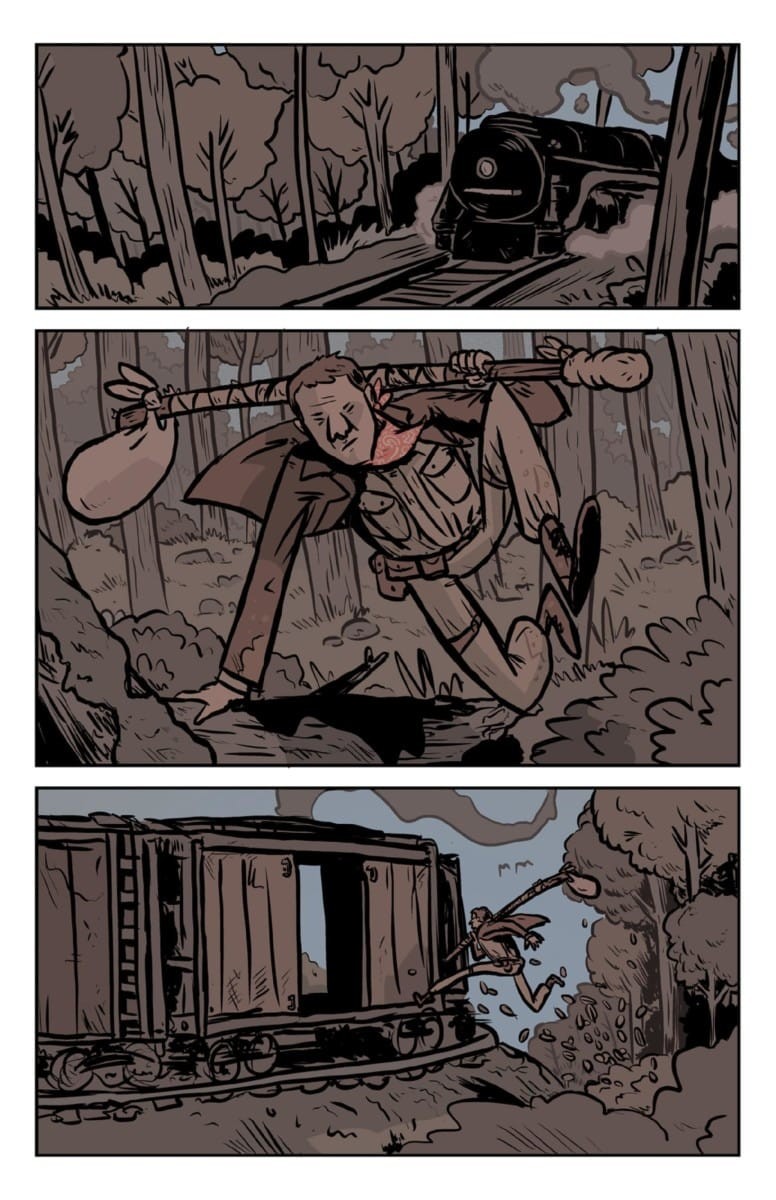 Through its premise, ROCK CANDY MOUNTAIN introduces the reader to the surprisingly rich culture of American hoboism. There’s hobo jargon, hobo songs, hobo symbols, etc. I also learned that the word “hobo” isn’t necessarily derogatory, as long as it refers to actual vagabonds, as the comic does. The title of the comic itself is referring to the folk song “BIG ROCK CANDY MOUNTAIN” which had its origin in hobo culture, a derivative of which you’ve probably heard before. Ultimately, ROCK CANDY MOUNTAIN’s odd premise is pretty educational.

In addition to drawing from actual hobo culture, ROCK CANDY MOUNTAIN’s narrative is injected with elements of fantasy. For a narrative about hobos, ROCK CANDY MOUNTAIN is oddly whimsical. Within the first few pages, you get the sense that anything might be possible in this universe. By hitting us with the unbelievable from page one, the creators are priming the reader for Jackson’s quest. Just maybe Rock Candy Mountain really does exist, despite all the naysayers.

There is something really dark about centering a comic on a group of essentially homeless men. However, the fantasy elements coupled with Kyle Starks’ very distinct sense of humor makes what should be a pretty solemn concept really fun. ROCK CANDY MOUNTAIN #1 is punctuated with moments of violence that are humorous despite the carnage and threat it presents. 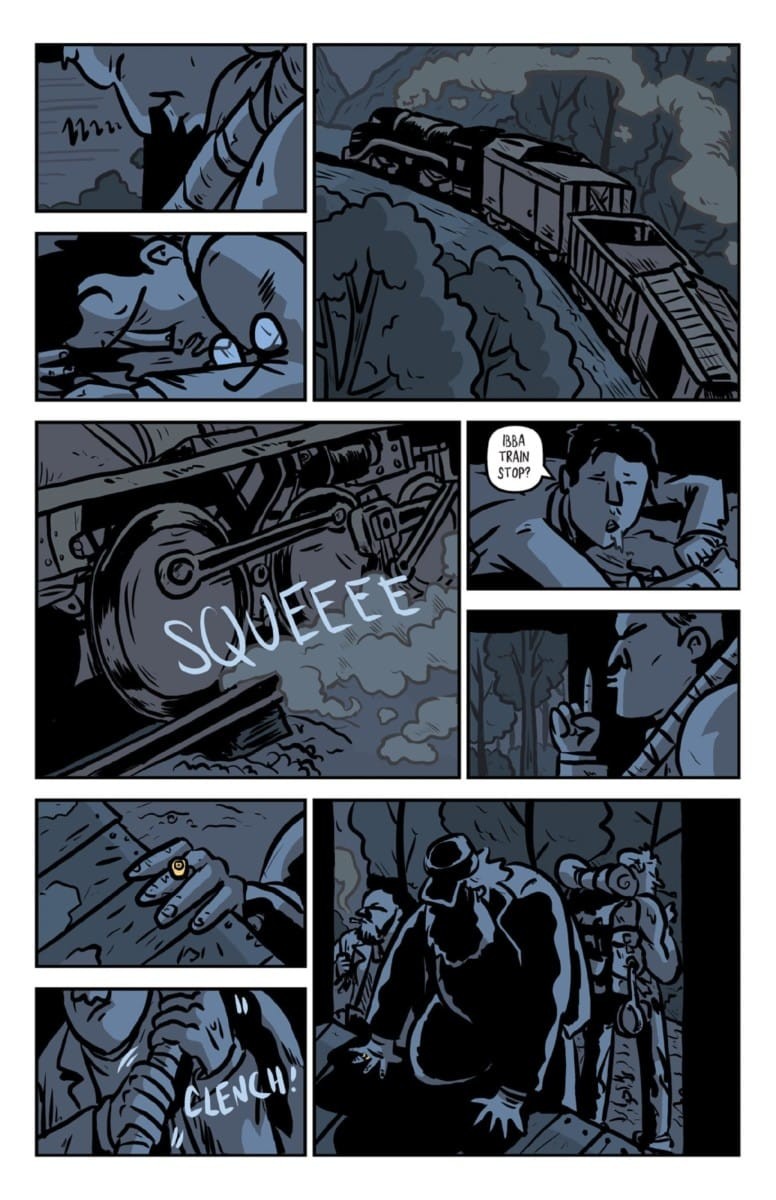 There is something exciting about a creator who both writes and illustrates the same comic. Even the best of collaborations cannot beat such singularity of vision. Starks’ writing in conjunction with his art makes the characters of ROCK CANDY MOUNTAIN instantly lovable. Jackson’s lack of expression is perfectly complimented by Pomona’s over-the-top gestures. Although we don’t know much about Jackson or his new companion by the end of ROCK CANDY MOUNTAIN #1, they are both undeniably charming. It’s both heartening and melancholy to see a hardened hobo still have hope that a magical paradise exists. Between Stark’s bizarre concept and wit, a perfect contrast is struck between humor, cuteness, violence, and somberness.

Witty dialogue, hobo action, and fantasy elements join forces in ROCK CANDY MOUNTAIN #1 to make a story that’s not quite like anything I’ve read before. ROCK CANDY MOUNTAIN is simultaneously having fun with the concept of hobos while also humanizing them. Hobos are not simply the butt of the joke but represent the never-ending hardships we all face on some level. Jackson’s ability to latch on to a glimmer of hope is admirable, regardless of how naïve this pursuit may turn out to be. ROCK CANDY MOUNTAIN’s unique combination of sympathy, humor, and unadulterated weirdness is not to be missed.