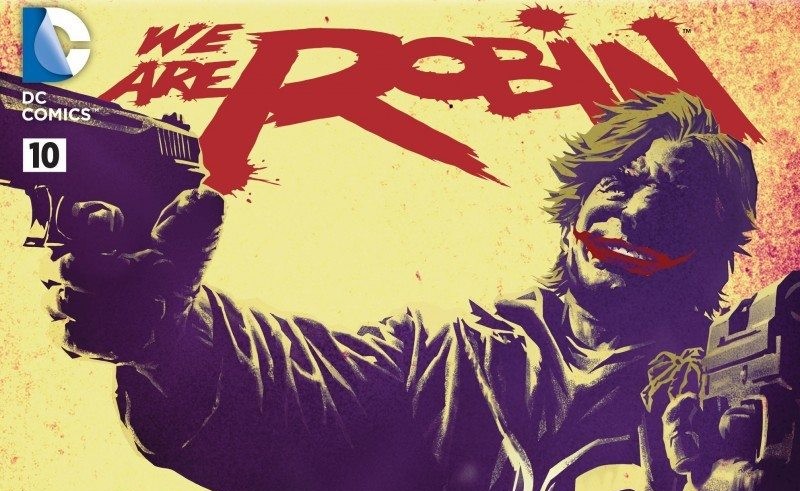 Still trying to recover from the aftermath of the ROBIN WAR, in which Duke and the gang learned what it truly meant to be Robin, the former Robins are all dealing with the harsh reality that none of them are the true Robin. Meanwhile, in another part of Gotham, a new gang calling themselves the Jokerz is causing trouble throughout the city. Will the Robins reunite to put an end to their reign of terror? Find out in this week’s issue of WE ARE ROBIN!

READ: Like Robin? Find out everything there is to know about the first one, Dick Grayson!

WE ARE ROBIN is a unique story that initially spun out of the events of Batman #40. With no Batman to protect Gotham, a handful of its citizens (mostly kids) are donning the notorious “R” to defend the city they love. What makes WE ARE ROBIN different from any other Robin story (like GRAYSON, RED HOOD AND ARSENAL, or ROBIN: SON OF BATMAN) is that these kids have no training at all. The closest thing they have to a mentor is Alfred, who rarely makes contact with them but does supply them with weapons. Still, this is a story that goes to the root of any BATMAN story: Just like Batman, these “Robins” want to defend their city from the evil that threatens it. 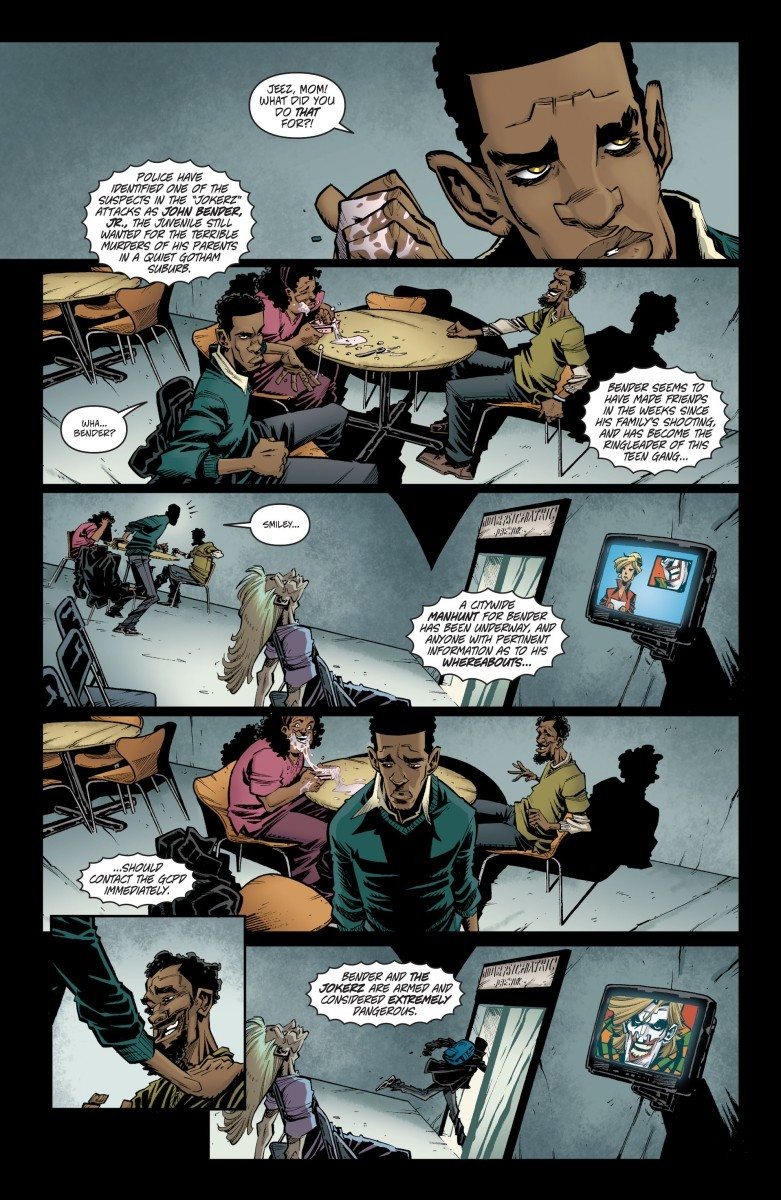 Continuing from last issue, each character is still trying to adapt to their old way of life (before they became Robin). The problem, though, is that they’re restless and hate having to stand on the sidelines. They understand that putting on the uniform means putting both their own lives and the lives of others in danger. To gain a better understanding of where the former Robins are coming from, you should read ROBIN WAR. The entire reason for the ROBIN WAR stems from these kids going out and trying to be heroes when clearly the life of a vigilante is more suited for those with training.

Our heroes are facing two big problems. The first is whether or not they should return to being Robins. The second is Gotham’s newest gang, the Jokerz. The Jokerz are being led by a high school kid named John Bender, who has come to be known as Smiley. After his parents made him get endless surgeries as a kid to fix his smile, he eventually lost it. It looked as if his face was made of plastic. Disgusted by his appearance, he took his anger out on his parents by killing them for putting him through the surgeries as a child. He thinks that he understands the Joker and started the Jokerz out of respect for his idol. He believes that fun is hurting other people without them ever knowing why.

READ: Enjoying WE ARE ROBIN? Then take a look at BATMAN AND ROBIN ETERNAL!

Since WE ARE ROBIN made its debut, I’ve followed every issue not because I’m a fan of everything Batman related, but because of the familiar tone that Lee Bermejo and Jorge Corona are able to set. It’s a tone that reminds me of other BATMAN related titles, like THE BLACK MIRROR and THE DARK KNIGHT RETURNS. These all have dark themes to them, but WE ARE ROBIN stand out because it is a story about inexperienced kids trying to be heroes. These kids don’t have Batman—or proper training or equipment—but that doesn’t matter to them. They’re heroes without money, fancy cars, or secret identities. All they need is the will to make a difference. That’s what makes a hero.

Bermejo has been the writer and cover artist on WE ARE ROBIN since the first issue. His writing has the dark and eerie feel of a Batman story that any fan of the Dark Knight can get into, and his passion for the project is clear. Corona adds to Bermejo’s story by providing the look and feel of WE ARE ROBIN with illustrations that give off a unique but familiar feeling that Batman fans can identify with. The art meshes well with Bermejo’s story, underscored by colorist Trish Mulvihill’s work in brightening up Gotham through the Jokerz. 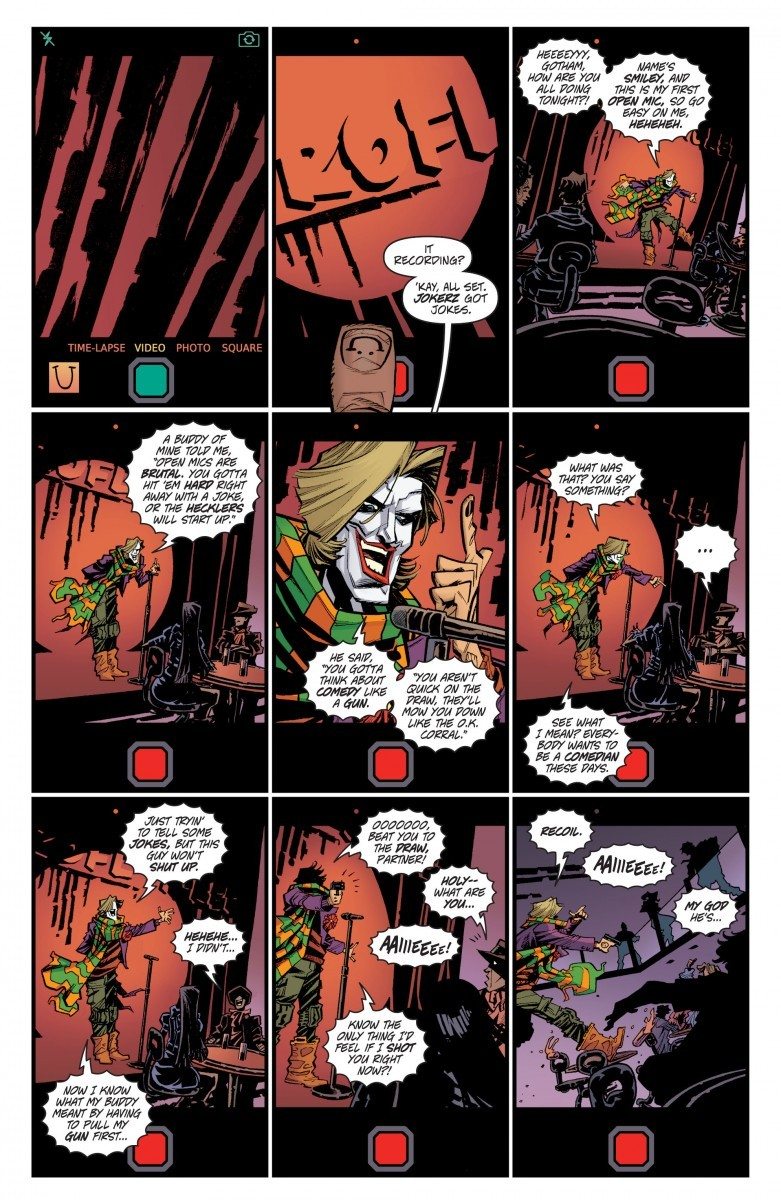 The story is not the same track as it was last issue. Nothing has changed much other than the Jokerz gaining more notoriety throughout Gotham. They seem to be planning something big, but nothing Gotham hasn’t seen before.

Will all of the Robins’ problems come full circle to unite each other? Is Smiley really a mini version of the Joker? Or is he just a wannabe like the rest? Tell us what you think in the comments below!