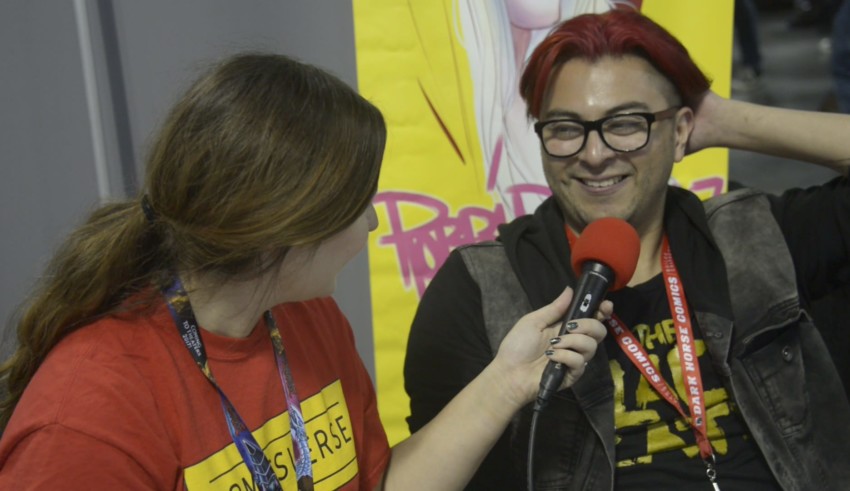 Who would have thought a few years ago that Gwen Stacy, the oh-so-tragically lost girlfriend of Peter Parker, would become one of the hottest marvel superheroes with her very own book? I certainly wouldn’t have predicted it, and it seems like Robbi Rodriguez wouldn’t have either in his interview from this year’s NYCC. ComicsVerse got the chance to reflect with the amazing SPIDER-GWEN artist on his time working with Jason Latour on the smash hit that Rodriguez still seems to be humbled by.

SPIDER-GWEN, for those of you who haven’t jumped on the bandwagon, is the story of what would have happened if Gwen Stacy was the one bitten by the radioactive spider instead of Peter Parker. The answer is that Gwen would become a superhero with her own tragic backstory as well as a kick-ass rock band with Mary Jane as the lead singer. Add to that the fact that the Spider-hero’s father is the police chief while also introducing a new version of Kingpin, and you’ve got a brand-new Spider-tale for the ages.

Robbi Rodriguez may be leaving the world of comics and SPIDER-GWEN, but that doesn’t mean that he didn’t have some amazing times on the book; Rodriguez lists the numbers coming in for the first title, as well as all of the amazing support he received on the book as some of his favorite memories. While the comics journey might be ending for Rodriguez, I’m sure there are tons of great things on the horizon for both him and SPIDER-GWEN. Check out the interview for more memories with the amazing artist!