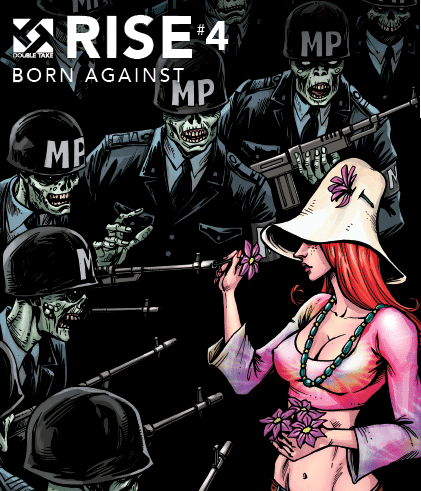 Continuing from where the third issue left off, RISE #4 immediately confirmed my suspicions regarding the true nature of University Hospital and its so-called “safety zone.” With its intense surveillance and overwhelming police and military presence, the “safety zone” appears more like a prison camp than an area meant for containment. Though RISE is already on its fourth issue, characterization of recurring characters, such as Johnny and Barbra, the main characters of the movie that Double Take’s universe expands upon, continues to be sparse and intermittent.

READ: Need to catch up on RISE? Check out our review of Issue #3!

In its defense, I don’t believe that the purpose of RISE is to provide characters with whom readers can easily sympathize and identify with. At five strong–Bill Jemas and Stan Chou on story, Jeff McComsey, Elysia Liang, and Ed Gavagan on script–RISE’s writing team excels at world building. RISE #4 serves to illuminate the role of the government and armed forces in the zombie outbreak, effectively polishing what would be an otherwise cloudy facet of a breathtaking gem. If you’re up to date with what’s been going on in the world of Double Take, it’s very easy to appreciate this issue’s story and dialogue. However, if you were planning on reading a single title from Double Take, RISE–especially issues three and four–might not be the book for you. 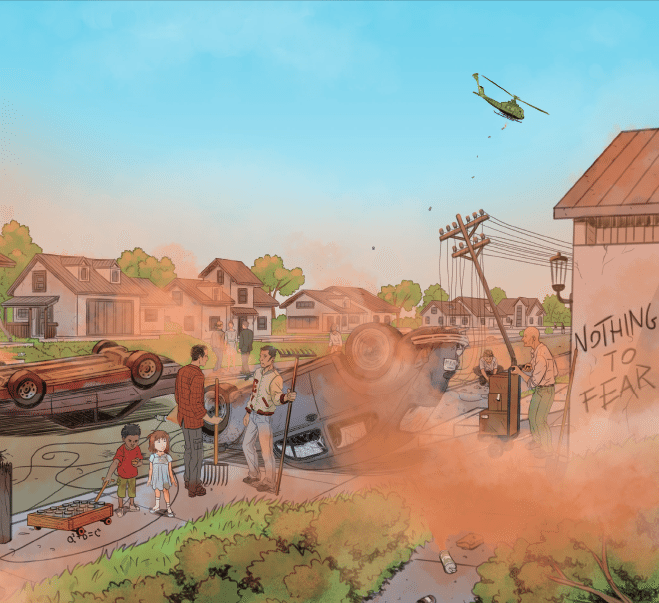 In the same vein, Double Take’s comics aren’t just for everyone. The new publisher has carved itself a niche in the comic industry by setting all of its comics in an expanded version of the world created by classic horror flick THE NIGHT OF THE LIVING DEAD. This peculiarity is both an asset and a hindrance. While it provides a deep, complex universe for committed fans to immerse themselves in and dissect, the ties between titles are so strong that, on their own, certain titles might be lost on the casual reader. These titles, RISE among them, provide readers with insight into elements of Double Take’s universe that might’ve fallen to the wayside under the management of a less-thorough publisher. While these books certainly enhance the experience of readers who consume the entirety of Double Take’s catalog, or close to it, they rely so greatly on information provided in other titles that they appear weak and unformed to casual readers.

READ: Don’t know much about Double Take? Check out this article to see why we’re so stoked about it here at ComicsVerse!

Even with four artists–Federica Manfredi, Leandro Tonelli, Fernando Melek, and Novo Malgapo–and two colorists–Vladimir Popov and Andrea Celestini–RISE #4’s artwork flows incredibly well. The artistic team is talented enough to engage even the most casual reader, for whom the lack of characterization and meticulous detail on the part of the writing team could be a huge turn-off. The success of the artists is impressive, considering the wide range of environments in RISE #4, which include airstrikes on suburbia, the oval office, and all that falls in between. 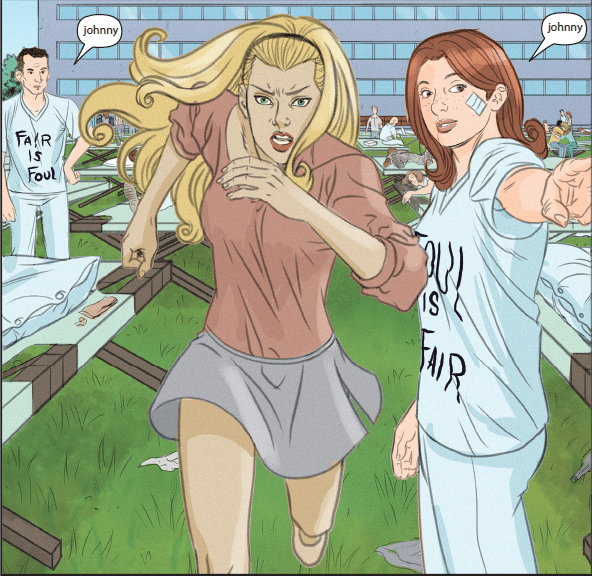 Double Take releases issues of all of its titles at the same time for a reason; they’re meant to be read together. While it is understandable that someone who is not familiar with Double Take might not be enthralled with the latest issue of RISE, as someone who does keep up with all Double Take titles, I can say that I wasn’t either. While RISE #4 is certainly stronger in every sense of the word than the title’s last issue, it still doesn’t hold up when compared to its first two issues. While it’s full of small, yet recognizable details that connect to the other Double Take titles, this doesn’t make the story progress any faster. What RISE #4 accomplishes in thirty-something pages could’ve probably been done in a little over ten.