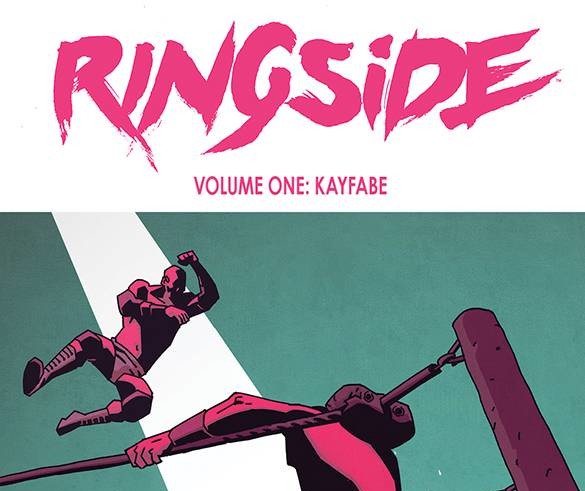 I would be the first to admit that I’m more enticed by new comics with interesting artwork over original stories. RINGSIDE is a series that appears to have elements of both. The first volume, “Kayfabe,” collects the first five-issue arc that serves as the groundwork for an intriguing story to come.

The writer, Joe Keatinge, is no stranger to Image comics or the Big Two. To see him write an Image title that isn’t SHUTTER is exciting, especially alongside a spanking new artist, Nick Barber (who’s making his debut as a comic artist and creator).

READ: Not a fan of Joe Keatinge yet? Check out his series, SHUTTER!

RINGSIDE’s first volume is titled “Kayfabe,” a word that I’m not wholly familiar with. In fact, I’m not familiar with a lot about the professional wrestling world at all. After some research, I determined that “kayfabe” is a word from the world of professional wrestling to represent the portrayal of staged events as authentic. Much of the hype that surrounds pro wrestling has to do with the perceived rivalry or competition between the hyperbolic characters the wrestlers play. In a lot of ways, kayfabe is evident in classic comic book stories in its suspension of disbelief. Taking the meaning of “kayfabe” into account after reading the first volume gives the story all the more depth. 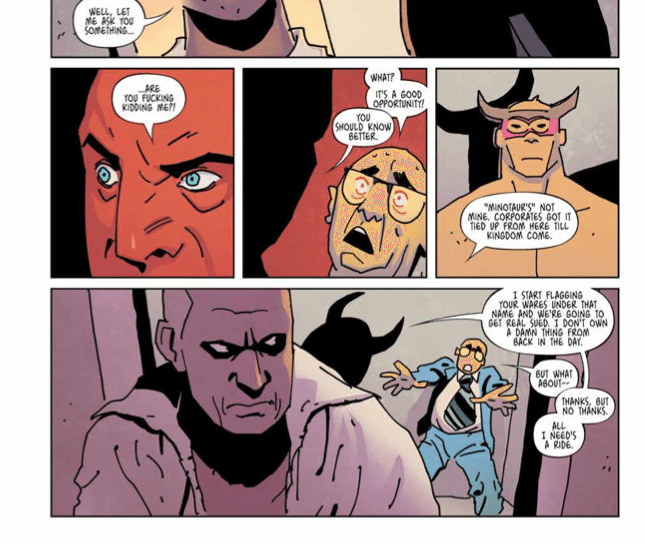 Predictably, RINGSIDE does take root in the world of professional wrestlers, both active and retired. We open on an older gentleman in Japan, training young wrestlers, with his bags packed for California. Three pages in, we understand that our protagonist, Dan Knossos, is training in Japan because of some kind of beef he had in California. He contacts an old friend and colleague, Davis, who questions the reason for Dan’s return.

Like any classic opening to a story and universe, Keatinge and Barber begin their story of a retired pro wrestler by returning him to a place that clearly means “unfinished business.” From there, a seed is planted that grows into a whole tree of conflicts that is rooted in a tumultuous relationship with his ex and the CMW (a fictional wrestling promotion). What’s supposed to be a story around the secrets and ambitions of pro wrestling becomes a much more complex narrative of crime, bail bonds, and identity. 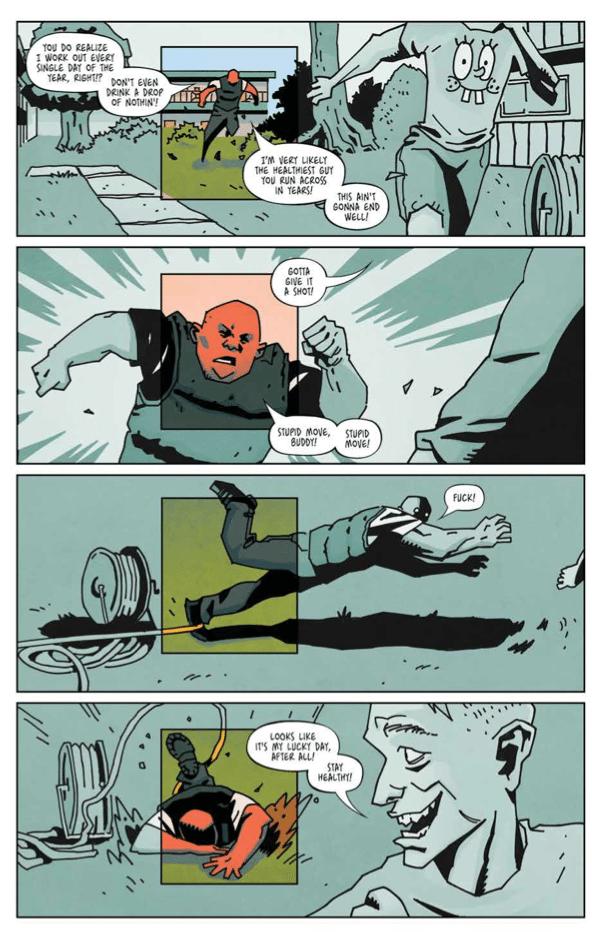 Dan, once called Minotaur, appears to be a tired and gentle retiree who wants to tie up any loose ends he has with his ex, who calls him suddenly in the middle of the night asking for help. He approaches old and new associates in relation to pro wrestling like an old pro. In general, Dan’s personality does not feel fully formed at first. While this could be naively read as a failing in the writing, later in the series, we see that a huge internal problem Dan wrestles with is finding an identity outside of the Minotaur. When he receives that call from a ghost in his past, he returns to California to help him because, in his words, it’s all he has. In addition, his stony-faced front is an extension of the skills he learned in his career as a pro wrestler.

Dan represents the portrayal of a fictional identity as authentic in both pro wrestling and in life: kayfabe. In this uncertainty and in light of the conflicts he faces in trying to find and help his ex, we see Dan’s “before” picture. Only by the end of this volume do we really see the protagonist and hero we can follow. The first arc serves as groundwork and history for Dan before he moves forward with a new sense of self. At the end of the arc, Dan discovers himself in the most unlikely way.

LISTEN: Have any thoughts about the Holy Trinity of DC Comics? Check out what we had to say about Batman, Wonder Woman and Superman on this podcast!

The one main narrative follows Dan’s search for his ex, and in a lot of ways, himself. The story that runs parallel to Dan’s is his old friend’s from his wrestling days, Davis. Davis appears to be a generally positive and wise pro wrestler with a young kid, Reynolds, to mentor under his wing.

They serve as a means for looking into the inner workings of the pro wrestling business, both for the creatives behind the stories and characters of the wrestlers, and the corporate suits pulling the strings. We not only get an idea of the tenuous relationship between Dan and the CMW, but also the politics of the locker room, with aging wrestlers like Davis and new bucks like Reynolds. 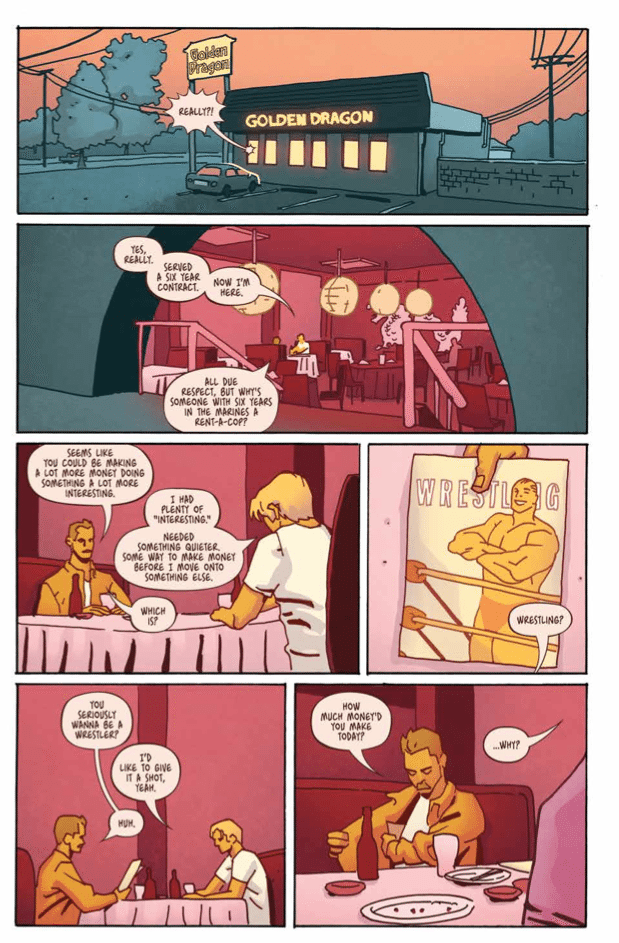 The first volume collects Dan’s path as a retiree, Davis’s as an old dog still in the game, and Reynolds’ as the fresh face of the company. Beneath the surface lie the deception and politics that go into both crime and the wrestling company. At the heart of this story, there’s remembrance of past wrongs and glories. By the end of the arc, there’s a burning desire for an identity and a legacy. 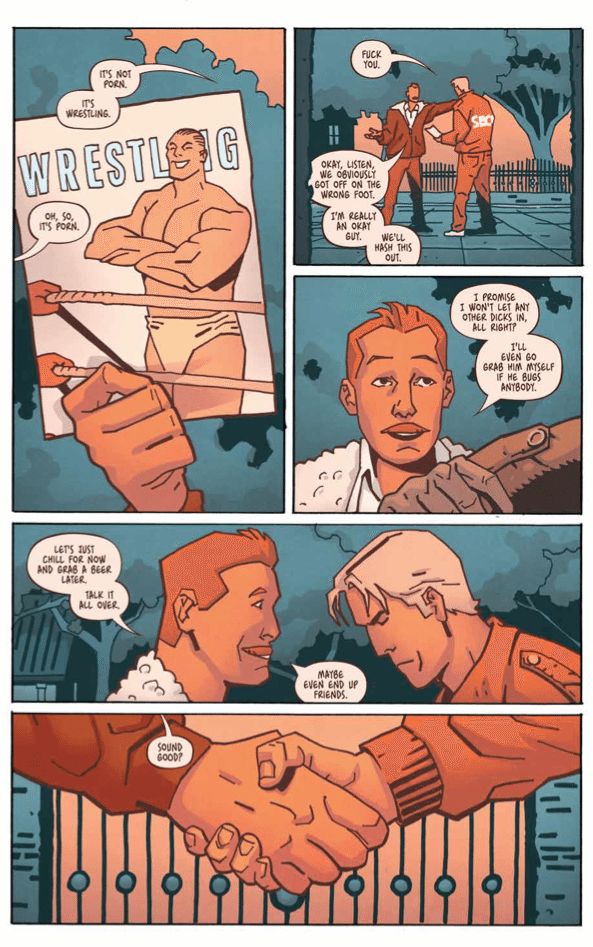 When initially opening up RINGSIDE’s first volume, I immediately noticed each page’s delicious color palettes. Akin to the likes of fellow newcomer Caspar Wijngaard’s work in LIMBO or more veteran artists like David Aja’s take on HAWKEYE, Barber and Simon Gough prove to stand out with their unique artistic ability. Barber’s simple, bold lines remind me of Mike Mignola’s work, while Gough’s coloring work makes each page a joy to look at.

READ: Need some more culture in your life? We got a guest writer’s analysis of acclaimed anime COWBOY BEBOP right here!

Gough uses colors with real purpose, with specific palettes for certain characters, emotions, and situations. When there is break into the past, you can easily tell. When you’re in a new location or revisiting an old one, you can recognize both the lines that Barber cleanly maps out and the clear color relationships. In short, on top of a very interesting first chapter to a larger story, the artistic team works wonders with the layout design team to create an airtight comic all around.

It’s not always easy to burn through a trade paperback on the first go for a brand new series, but RINGSIDE made it easy. I can’t wait to see how Dan moves forward and through his labyrinth of conflicts with the Minotaur identity behind him and a brand new narrative in front of him.