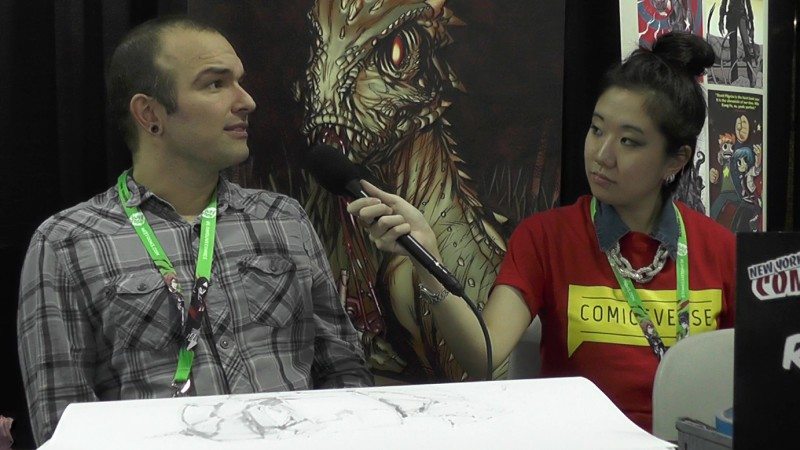 Whenever someone asks me what kind of art I would like to emulate if I ever wanted to get into comic book art, I always said, “Whoever did BEDLAM: VOLUME ONE with Nick Spencer.” Well, I got to meet the amazing Riley Rossmo, most famous now for working with Alex Grecian for the ongoing Image series, RASPUTIN. For those familiar with the comic book series PROOF, RASPUTIN is another chance for them to enjoy this team coming together a second time as co-creators.

Rossmo was a joy to talk to. I also admired he wanted to continue drawing as we conducted the interview. Nothing is more interesting than watching a master and artist at work. Despite this, he was nice enough to take pause to consider my questions before answering. He answered questions like how he got into art. He also talked about what he enjoyed about BEDLAM. Additionally, we conversed about his love of collaborating.

In regards to BEDLAM, I much liked how polarized I found the use of color regarding the villain turned anti-hero, Madder Red. I have always loved the colorway of red, black, and white. He describes how he finds limiting his color choices in his artwork helps his creativity. This gave me some insight on artists’ different approaches to color.

Riley Rossmo and the Art of Collaboration

Many artists I’ve had a chance to talk to at NYCC 2015 also told me that they much prefer working on their own. However, it seems that Riley Rossmo actually enjoys the camaraderie among artists and creators in comics. In fact, he talks about Skyping and leaving the call open as everyone works individually from their homes. While Skyping, they occasionally share artwork and ideas.

Riley Rossmo proved to be as good-humored and modest as he is talented. As someone who began from having to work for everything he has today, he talks about how much art was a skill he got the chance to pursue because of a great program through Alberta College of Art and Design. Whatever he learned there, certainly helped him in making his place as an artist today. Take a look at our interview and also remember to check out the ongoing series, RASPUTIN, one that he himself says that he’s the most excited about out of all the work he’s ever done!