So, in typical Adult Swim fashion, the RICK AND MORTY season three premiere was finally unveiled after a year-and-a-half hiatus. On April Fool’s Day. Repeating on a loop for hours. After the initial shock of finally realizing that this was not a drill, yours truly was able to sit down and watch the season three premiere, and boy was I floored. This episode has the perfect mixture of hilarity and darkness the show is known for, providing the viewer with thought-provoking realizations and laughter throughout. While the debut of this episode was a total surprise for anyone who doesn’t work at Adult Swim, one should not be surprised that this was one of the best episodes to date. I mean, these guys did work on it for the better part of two years. 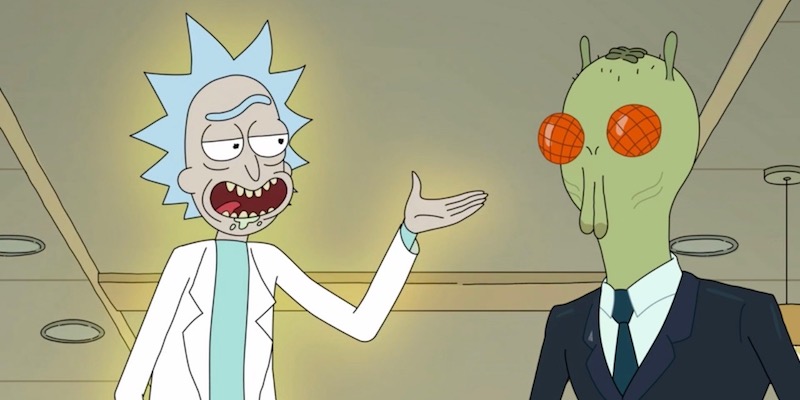 In shows such as RICK AND MORTY (read: comedies), oftentimes episodes can skate by on the quality of the jokes presented throughout. This is not the case in the season three premiere, as the storyline itself is stupendous and fortified with the humor the show is known for. Going back to the original universe that the show started in (aka the Cronenberg universe) was a great way for Morty to show Summer how Rick can easily cut bait and run when the situation presents itself.

It also drives home to the viewer how terrible Rick can be. We got to see how Summer, Jerry, and Beth, members of Rick’s own family, have essentially reverted to cavemen because of the elder Sanchez.  The first look we got at Rick’s wife Diane tugged at our heartstrings… that is until the whole situation was shown to be a made-up memory. Later, there’s the realization that Rick intentionally got himself sent to prison in order to deal a debilitating blow to both the Federation and The Council of Ricks. This punctuates the statement made earlier in the episode that Rick is indeed the smartest being in the universe and builds anticipation for further showdowns between the three factions.

READ: Check out our review of RICK AND MORTY Issue #11!

While the plot of the season three premiere was ON POINT, that doesn’t mean this episode was lacking in the humor department, not by a long shot. Having the fake Jerry fold in on himself, the whole sequence of Rick declaring he had to take a shit every time he switched bodies, and Rick’s speech, which mirrors the speech he gave Morty at the end of the series premiere, were the definite highlights. What makes the humor in this show so unique is how effortlessly the show moves from joke to joke, and how the jokes that are made within this unrealistic universe seem to be perfectly sculpted to the situation. Although it is a cartoon, RICK AND MORTY doesn’t simply rely on outlandish and unrealistic situations to get laughter from its viewers. The dialogue is strong and can carry the episodes when necessary, which is extremely rare and refreshing for an animated show. 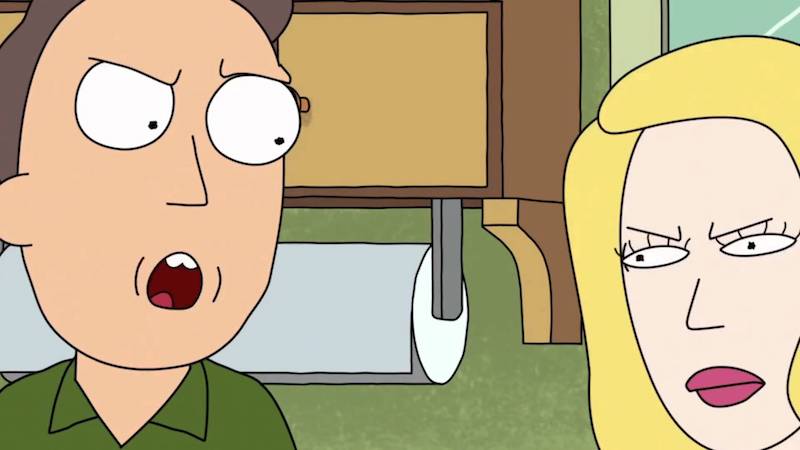 One aspect of this show, and in particular the season three premiere that cannot be overlooked is the potential sadness and gloom that RICK AND MORTY is capable of generating. As mentioned above, this episode was the first opportunity viewers got to see Rick’s wife. Morty and Summer dug up this universe’s previous Rick to retrieve a portal gun. There was the post-credit scene that showed that Tammy was instrumental in converting BirdPerson into a cyborg. These scenes showed how this program can go all over the place on the emotional spectrum and is simply not your run of the mill adult cartoon a la FAMILY GUY or BOB’S BURGERS.

READ: Take a look at our interview with RICK AND MORTY’s Creative Team!

The season three premiere was a fantastic episode. It was filled with laughter, sadness, and if the idea of turning someone into a cyborg freaks you out a little, a little creepiness as well. The extent to which Rick affected the Council of Ricks and the Federation was a little much, to be honest, but you knew after the delay the show had it absolutely had to come back with a bang. Beth and Jerry finally deciding to get divorced was a bit surreal (and yes I know how odd using the word surreal sounds considering this show) since it had seemed like their divorce would always be something that would be looming and never actually come to fruition. Overall this episode was a great start to the season, and I for one cannot wait to see the rest of the episodes this summer.