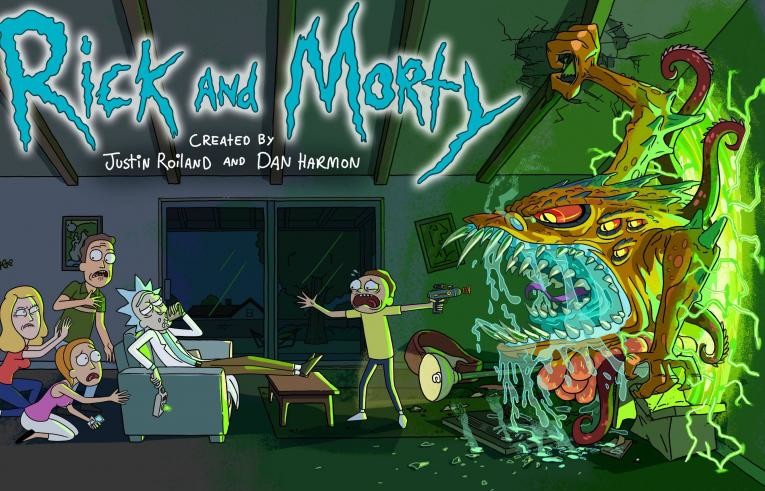 “OOOH WEEE!” RICK AND MORTY is one of my favorite things to ever exist.  Not only does this interdimensional world of insanity have an incredibly highly rated show of ridiculousness on Adult Swim, but it has also produced an award-winning comic book published by Oni Press.  Oni Press is no stranger to adaptations or strong content either, generating the likes of the infamous SCOTT PILGRIM, the mind-altering THE AUTEUR, and a relatively new revision of the beloved Nickelodeon series INVADER ZIM!

LISTEN: Looking for something a new favorite character that’s a little fun, different, and totally underrated? Check out our podcast about Martian Manhunter!

RICK AND MORTY was originally created by Justin Roiland as a web-series spoof of BACK TO THE FUTURE called DOC AND MHARTI (WARNING: Strong Parental Advisory: If one chooses to look into this, it cannot be unseen).  He was approached by Dan Harmon of COMMUNITY to create a show for Cartoon Network’s ADULT SWIM and a cataclysm of orgasmic fun blessed its now rabid fan base.

Needless to say the comic version, penned by Zac Gorman, illustrated by CJ Cannon, colored by Ryan Hill, and with back-up art from Marc Ellerby, had a lot to live up too.  Nobody wants a poor adaptation, yet RICK AND MORTY’s content doesn’t yield itself as the easiest material to bounce off of.  The characters are so well-defined and beautifully flawed, and how could they replicate the complex scope of humor which leaps from dark nihilistic tones to unapologetically immature and politically incorrect sexual gags?

WATCH: Miss out on NYCC 2015? Catch up with ComicsVerse’s interview with Ryan Ottley!

I began reading the series in October and was pleasantly surprised.  Zac Gorman extends and expands on characters in a uniquely fresh way, while simultaneously keeping their original traits and integrity.  The artist also provides depth with vibrant colors and exceptional craftsmanship when replicating the RICK AND MORTY characters and world.  I accepted and loved the comic version, but I was anxious to learn if others felt the same.  Well, the new year provided me with the answers I had been seeking.  First, Comics Alliance announced their winners of a public poll with various categories, in which RICK AND MORTY won for Best Comedy against extremely strong competition like SEX CRIMINALS and UNBEATABLE SQUIRREL GIRL.  Then, just a day or two after that announcement, it won the 2015 Best Licensed Comic Book of the year from the Diamond Gem Awards.  This was another impressive award particularly because it was “…selected exclusively by comic book specialty retailers and recognized within the industry as the pinnacle of sales achievement for publishers, industry executives, and creators”-Diamond Gem Awards.

So why is the comic so successful?  In short, it replicates the violence, the humour, the adventure, and the characterization of the masterpiece television show, the Blips and Chitz of it all!  Zac Gorman does a fantastic job of creating stories and plotlines that have honestly made me question whether or not a scene was in an episode of the show.  For instance, look at the excerpt above from issue number five with Morty and Scary Terry.  The dialogue, expressions, and interactions are just on point!

Zac Gorman and his artist team have developed adventures that stand-out, in the sense of how impressively accurate they are.  Often the issues have the main characters somewhere in the fold, or if not they get a dope little mini-interlude towards the end.  The audience still gets the anxious Morty, the weeny Jerry, the hardass Beth, the intuitive Summer, and of course, the drunk egotistical genius Rick!  We get more of them this way and often get to see other sides of them that don’t conflict with the show.  Some unique plotlines include: Summer being a total badass resistance leader; Morty being a more fleshed out evil genius, which is similar but not exactly parallel to season one, episode eight: Close Rick-Counters of the Rick Kind; and a whole issue of just Ball Fondlers.  The comics transport you away from the daily grind and into one of Rick’s portals.  It’s a thrill to read and imagine this world when the show needs valuable time to recreate a new content.  It does more than just fill the void.

If someone who is a fan can’t read this and chuckle, then there is no hope for your decrepit soul. It’s just a wonderful addition to the RICK AND MORTY universe, as they continue to please fans with all sorts of different content. Check out this Pokemon-esque game they’ve created called POCKET MORTYS!  As long as the extended RICK AND MORTY content is as Rick-tastic as the comic, I’m all in!

*All images have been provided curtiosity of Oni Press!