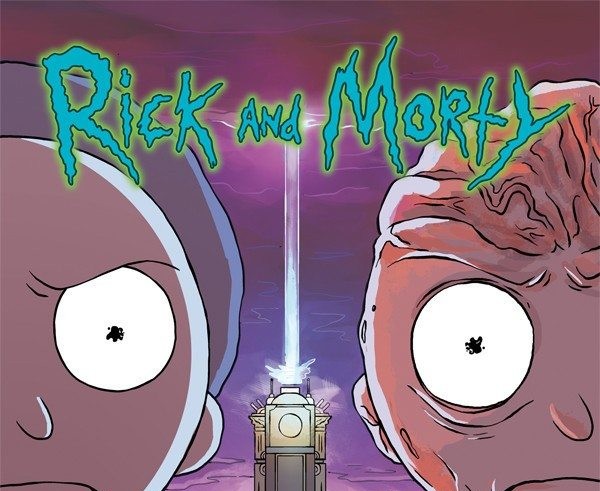 RICK AND MORTY #10 is a triumphal end to Zac Gorman’s writing run for the licensed Oni Press publication.  It’s a work that resembles the legacy of Nintendo’s Game Boy and it’s a grey brick of magnificence, rather than Sega’s Game Gear that simply wasted precious batteries.  Think that joke is as random as it is funny?  Well, it’s a rephrasing of one of Zac Gorman’s illustrious jokes, and even more of a reason to pick up this book.  RICK AND MORTY #10 has humor, blood, torture, and Jerry, for better or worse.  It’s the final piece, in which Zac Gorman completes an intense four book arc.  Issues one through six were mostly books with vignettes that shined by themselves.

READ: My coverage of why RICK AND MORTY deserved to win awards!

Issue #10; however, relies on the precedent started by an upside down dimension ruled by a ruthless, deformed overlord Morty.  Rick and Morty got to this dimension after escaping a forewarned killing of all Ricks and learn Summer is a part of the resistance.  She is now trying to help the “normal” Morty rescue his recently captured Rick.  It’s an arc with similarities to the episode “Close Rick-Counters of the Rick Kind” (Season 1, Episode 10), but the whole family is involved in this one, and the twists are vastly different. 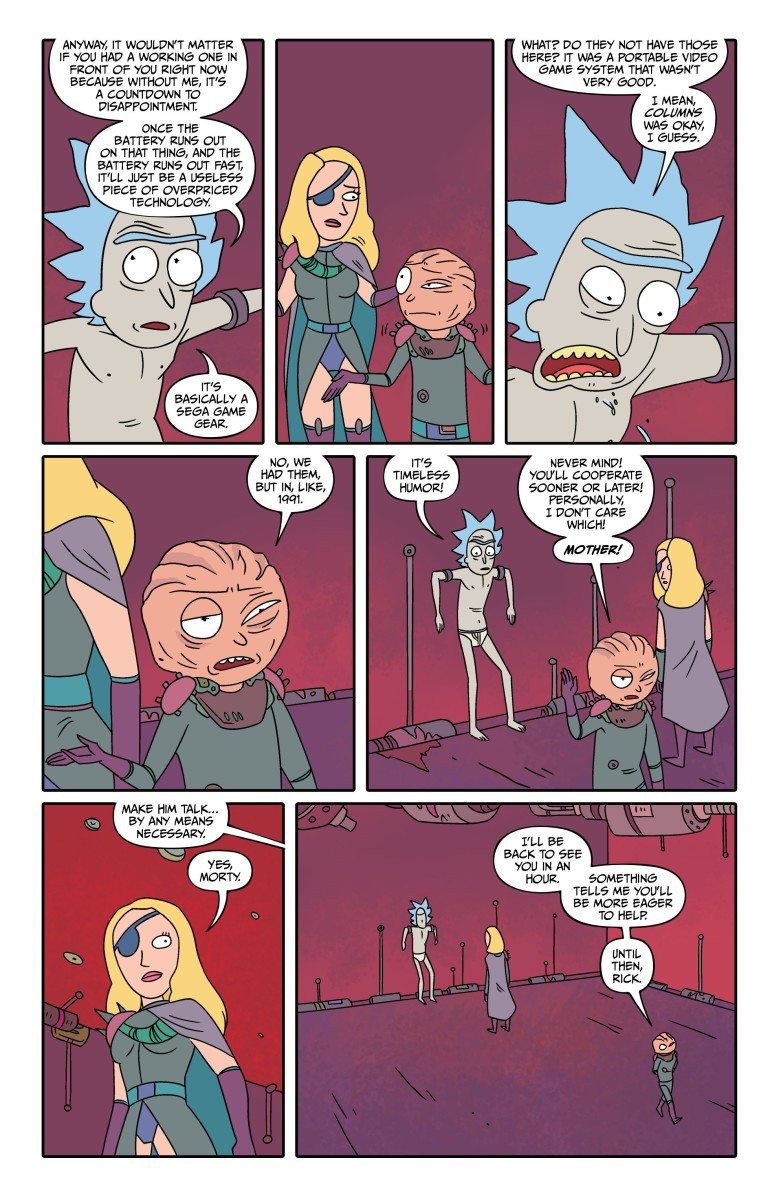 Gorman’s final issue may just be the closest imitation to the show.  Without divulging the plot or any surprises in it, I’ll give insight to why and how he accomplishes this.  The characterization is the driving force and with that come familiar pieces of humor.  Summer may be a bit jarring as a badass resistance fighter, but the previous issues set a precedent for this and Summer has certainly evolved in the television show, so it’s not a stretch as one would originally think.  She’s very likable in this depiction.  It suits her.  Jerry has a moment that reeks of try-hard redemption after being a backstabbing coward in previously issues of the arc.  It exemplifies the pathetically sad and incompetent man that he is, and ultimately he does more harm than good, although still oddly insignificant.  The completely separate B story that comes after the overlord Morty arc brings back Doofus Rick and Jerry’s bromance.  It’s a love story that even Nicholas Sparks would applaud, and then simultaneously cash in the movie rights.  Many tears are shed for the reader and Jerry.  Morty remains to be the whimpering, anxious, and lovable teen throughout.  His morals and love for Rick never waver, even when facts are presented to dissuade him. Rick remains his usual self, of course.  He cracks jokes at being tortured, as you can see in the excerpt, and stubbornly didn’t care about saving this dimension in the first place.  Finally, Beth is sneaky herself, but we only see this through sneering comments and the conclusion. 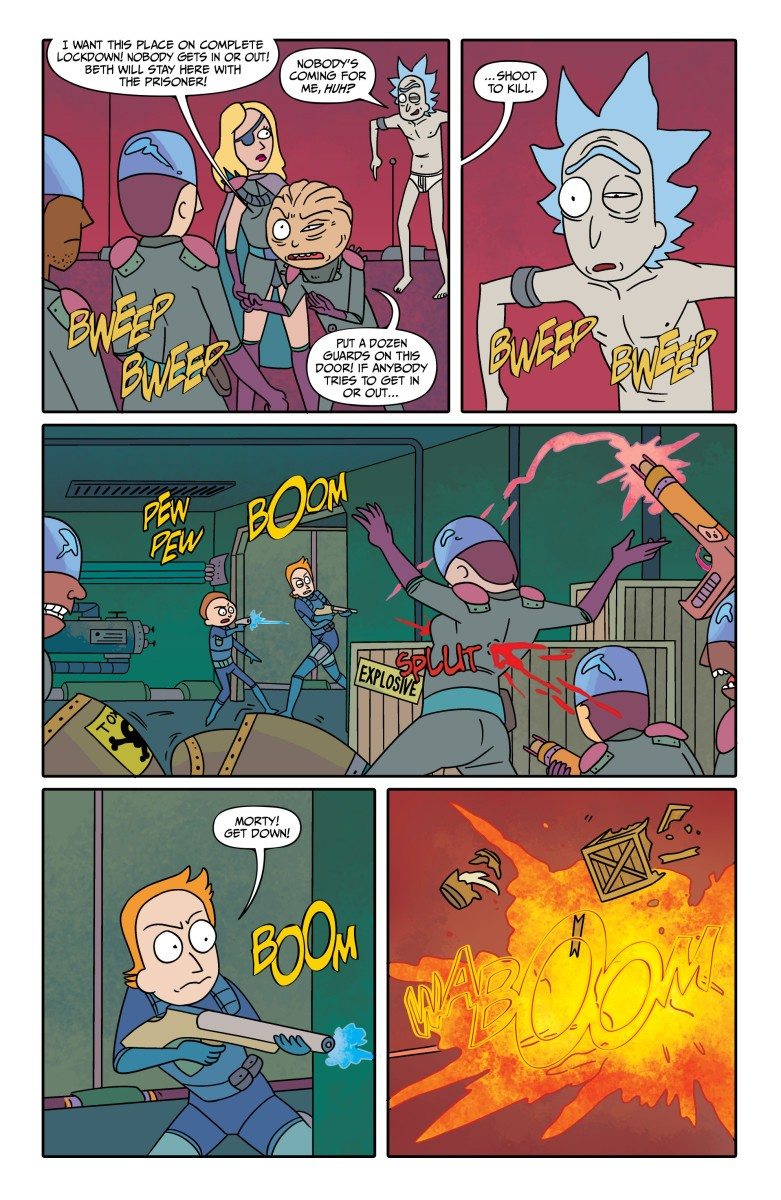 The art is wondrous.  It’s faithful to the show. The colors are engaging and the characters are as close as possible without being movable like in animation.  The team behind the art: CJ Cannon, Ryan Hill, and Marc Ellerby create strong hues with interesting texture.  Look at the wall behind Summer on the last panel of excerpt #2, as well as, the blue gun blast, and the fiery explosion. There is unique and unsuspecting detail that allows the comic to stand out.  These artists allow the reader to be transported into RICK AND MORTY from another medium.  There really isn’t any more to ask for.

LISTEN: To our Podcast About X-MEN’S STORM!

This comic brings so much joy. RICK AND MORTY has definitely been a suitable fix when the show is on break, and Zac Gorman deserves a lot of the credit for his work.  His humor was as outrageous as it was obscure. His character development and plots were extraordinarily inventive without detracting from the original source, and he gave plenty of fan service material by incorporating a beloved Rick catchphrase and breaking the fourth wall.  He will be surely missed, but not forgotten.

If you don’t read this I urrrrrrrrpppppp don’t know what’s wrong with you.  You’re as useful as Jerry! “Nintendo give me free stuff!”