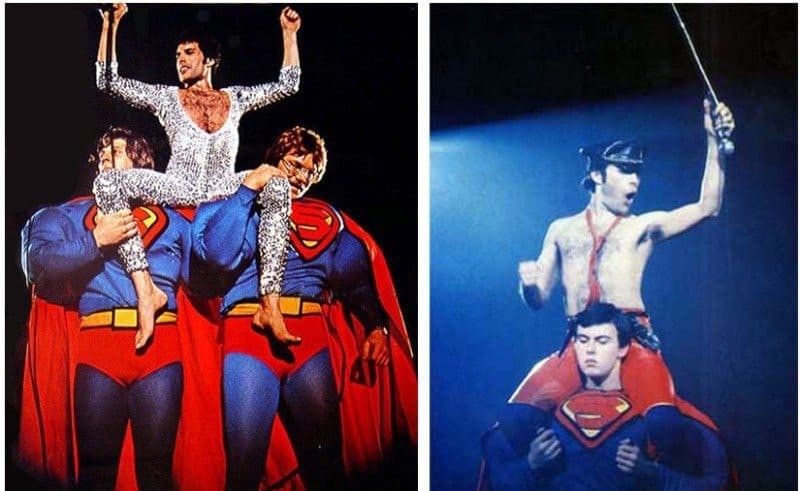 So, the thing about comics–and this is arguably the thing about comics–is that it’s full of holes. The creators make a world, toss it into the air, and then between panels, the reader is responsible for keeping the world afloat. At the end of the panel, you start collaborating with the author, whose creation only exists because the two of you have this tacit agreement to pretend that the narrative and place you’ve entered is consistent and coherent. One million years ago, when he was also writing about reel-to-reel and Dictaphones (some parts of the previous statement might not be accurate), Marshall McLuhan categorized comics as a cool medium because of its audience’s active role (Understanding Media 1964). Scott McCloud called this activity, keeping the world-balloon airborne even when it drops off the page, closure, which upon reflection may not be the most ideal terminology—because then what do you say when you want to talk about how the panel’s frame works, and you’re interested specifically in how it closes off its interior from the rest of the page/superframe?—but there it is.

Music, on the other hand, typically doesn’t demand the audience’s participation in such an active capacity. When there’s a gap in a melody, it’s called a rest, and it’s not your job to imagine what goes there—it’s your job to feel the silence. You take a breather from an intense section or you anticipate what follows, but you don’t supply a missing note. 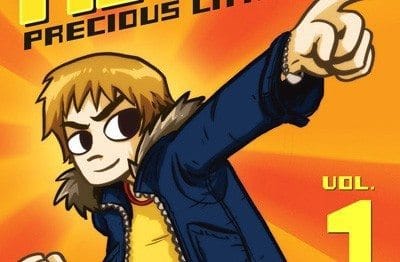 In November, The Comics Grid published research by Kieron Brown <http://dx.doi.org/10.5334/cg.aj>, surveying the use of music notation in three different comics: guitar chord diagrams in Scott Pilgrim’s Precious Little Life (O’Malley 2004), panels, scribble, and abstract musical notes on a staff in Cages(McKean 2009), and clean notes on a staff intercut with images in V For Vendetta (Moore and Lloyd 1983). Brown’s article is a good place to start thinking about how representations of music work in comics. He’s looking at actual notation, rather than depictions of characters singing or playing, or captions suggesting a soundtrack, but comparing these four authors’ uses helps establish a foundation from which we can begin exploring music in comics. -Basically, we’re looking at a conflict of timing and rhythms, and trying to figure out how they interact with each other.

Another thing comics do is provide a path for the reader’s eyes to follow, and then establish in the reader a kind of pace. For this reason, it’s very tempting to make parallels between the shapes and spaces of music notation and the shapes and spaces of comics panels and strips. Sometimes those parallels will exist. (Have a look at the “Two Bar Romp” in Godek’s article here <http://comixtalk.com/node/7350>, cited in Brown.) But in the absence of convincing evidence to the contrary, or at least in the absence of my thinking enough about comics rhythm to change my mind, I tend to agree with Thierry Groensteen, circa 1999, that it’s erroneous to assume an “automatic correspondence between the form and the dimensions of the frame and the length of the supposed action it enframes” (The System of Comics 46). The amount of time an action in a comic seems to take depends too much on context for anyone to be able to establish hard and fast laws, even for a particular author. In other words, there’s no point trying to say that a panel x cm longer than the other panels on the page encloses an action which is y seconds longer. Even if that would make what we do sound real scientific-like, and maybe then Obama would respect art history degrees. 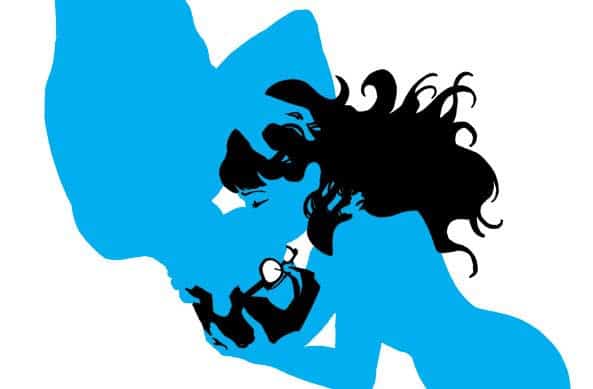 But what I really want to talk about today is Sex Criminals #3, by Matt Fraction and Chip Zdarsky. Now, this is a story for comics. So far, Sex Criminals is about regular people who are able to stop time while they’re in the midst of orgasm. Naturally, the story requires that the artist represent characters moving while time has stopped, other people and objects frozen in time and space around them, and the aftermath when the rest of the world starts moving again. Here is an opportunity for a medium that divides time into space to really shine! Here is an opportunity for you to write a Comp. 101 paper with the words Cumworld, giant dildo, and taser-Fleshlights™!

In the third issue, after a romp through a sex shop, the main characters Suzie and Jon are playing pool when Queen’s “Fat-Bottomed Girls” starts to play in the bar. Suzie stops the game to sing along, and thus commences a 3-and-a-half page musical sequence, which escalates from realistic to fantastic: her clothes become more Mercury-esque, the other bar patrons sing and dance along, and stage lights begin to flash. The progress of the song and the passage of time are tied together with the lyrics acting as string. Only one panel near the beginning of the sequence uses music notes in the air and Suzie’s posture to pass song-time without words.

However, due to legal complications, Sex Criminals #3 went to press before the rights to use the lyrics cleared. What we read in the serial is a true example of images and text juxtaposed: Zdarsky’s art with Suzie singing “Fat-Bottomed Girls,” and styled as Post-its pasted over these lyrics, Fraction’s commentary explaining what went wrong. The tracks of temporality here are multiple and complicated. Let’s list them!

So, let’s say, at the bottom (1) is what’s going on the “real world” of the narrative: for four minutes and sixteen seconds, a bunch of people are playing pool in real time, and one annoying woman is singing and dancing along to the Queen song on the juke box. Above that (2 & 3) is Jon and Suzie’s affective temporality, in which the emotions they’re experiencing make that 4 min., 16 sec. seem either extended because the experience is so meaningful, or shortened because the experience is so fun (more on these in a bit). Above that, I suppose, is the ideal collaborative temporality that was supposed to be made when the audience read the sequence as Fraction and Zdarsky intended—a kind of sympathetic approximation of what Jon and/or Suzie are experiencing (4). Then there’s the time stream where the audience has already read Fraction’s commentary and is trying to guess at what the ideal collaborative temporality is like (5). Above that is the actual collaborative time (6), or what the readers experience encountering the images and Fraction’s Post-it narration. And all the way on top, is the story Fraction tells (7-9 or so), which, by the way, includes imagining what it was like for Brian May to experience the first 4 temporality layers.

This is what it’s like when mediums and production processes collide. Up in these top temporalities, Fraction and Zdarsky thought it would be fun to make a musical sequence—so the concept for these pages preceded the narrative, and importantly, partly originated in Fraction’s work with videos. What we have, then, isn’t a representation of an auditory experience in a visual form, but rather an adaptation of music videos, a form that already uses visuals to enhance or change your experience of music-time. 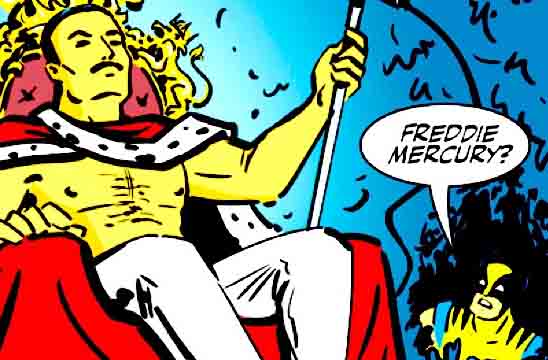 With his Post-its, Fraction does an end-run around most of the work a reader would do in the middle temporalities. By telling us that he and Zdarsky wanted to make a print musical, we evaluate the images on those terms. And instead of traveling along the track of the lyrics, we travel on Fraction’s narration and intentions, which, above the story, act like a theme park riverboat guide’s pattern. We experience the sequence more as a series of vignettes, or a montage instead of a continuous scene. So we see where Queen lyrics would have been cool, we see where the authors use musical conventions of increasing the number of background dancers and the height and depth of the frame to match a song’s growing intensity, and we rate the idea of the thing (Neat!) rather than the thing itself (Who knows?! Maybe we’ll find out in the trade!).

Without the lyrics-permission snafu, this scene would dramatize the different ways different people experience musical time. Although Queen songs are fun to listen to and fun to sing, they can be a trial to watch amateurs perform, say, at karaoke, because there are long instrumental interludes—here, reduced to one small panel near the beginning. Unless you’re Freddie Mercury, you’re engaging in some reckless self-indulgence by asking other people to sit through your Queen performance. Self-indulgence in Sex Criminals can be downright heroic (ha-cha-cha), but it’s not universally attractive.

The panels we experience on the level of the ideal collaborative temporality are those in the middle, when Jon, at some point in the future, reflects: “In case you were wondering, babe—/—‘Fat-Bottomed Girls’ was when I knew I loved you.” These panels are a little tell-y (rather than show-y), because we’re not getting what Jon is getting—we’ve missed out on all the stimuli that makes Suzie lovable to him in that instant. But it’s hard to know if that helps or hurts. If, in fact, the sequence is presented as intended in a future edition, we’ll have an opportunity to compare the same sequence with different rhythms, and to decide if the song provides a faster path to love than the idea of the song.

Groensteen, Thierry. The System of Comics. Jackson: UP Mississippi, 2007. Print.