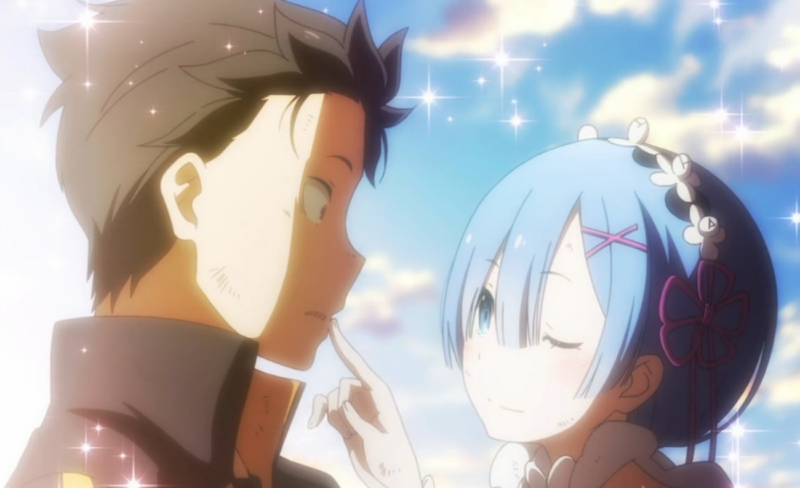 RE:ZERO – STARTING LIFE IN ANOTHER WORLD was one of the most successful anime of 2016. The series began as a collection of ongoing light novels before being adapted into an anime. Since the release of the anime, the series’ popularity has exploded worldwide and fans are anxiously awaiting for a second season.

The show’s concept, for those unfamiliar with it, is rather simple. The series begins with protagonist Subaru Natsuki, a jobless shut-in, walking home from a convenience store one night. Suddenly, he finds himself transported into a new world and is almost immediately met with trouble as he wanders without a clue. He resists some thieves who rob him in an alley and is brutally murdered just minutes into the episode.

The strangest part about all of this is what comes next. Almost like a character in a video game, he ‘respawns’ back in the unknown city he transported to before his death. The series bases most events around this power of his. He has to make decisions and guarantee certain outcomes but, should he die, he loses some progress. Occasionally Subaru’s ‘checkpoint’ moves ahead in time, usually after major events, but he has no way of predicting it. Fortunately, he retains the knowledge of his former lives. He is also able to adjust his actions knowing that certain things lead to his death.

READ: Some other great 2016 anime you may have missed!

Palmer Luckey, founder of the virtual reality company OculusVR Inc. (maker of the Oculus Rift) is a huge fan of the show. Back in March, he tweeted out interest in an anime adaptation for several ‘What-If’ chapters. This ignited the interest of fans who’ve read those special light novels. He reaffirmed that tweet late Wednesday with renewed interest.

This tweet must've gotten reposted somewhere, because I have a bunch of people contacting me now. Time to make it happen! From zero! https://t.co/7GjnuxEtCn

The chapters detail a storyline that could have happened but was erased due to an untimely death or a major antagonist killing Subaru. These particular chapters stem from a scene between Subaru and a character named Rem. The plot involves the two of them essentially abandoning the original plot and running off together to live a life of happiness. For many of the show’s fans (myself included), Subaru’s romantic choices can be frustrating, especially given that he can just die and undo any mistakes he makes. This sort of frustration is what inspired the creation of these alternate storylines in the first place.

Will a Project Actually Happen?

A season 2 release date for RE:ZERO has yet to be announced, and it’s doubtful a side story would be released ahead of the actual show. Regardless, the option of outside funding raises some excellent possibilities. Given the show’s concept, there are plenty of incredible plot arcs that could have been extremely interesting. Similar to the alternate endings included in popular movie DVD sets, the idea of alternate endings for an anime sounds incredible. A fan can have their favorite two characters who didn’t end up together get some screen time as a couple.

Other known anime such as NARUTO have released movies in the past around this what-if concept, so it would be no surprise if it becomes a regular part of anime releases. Popularity catalyzed the initial RE:ZERO anime adaptation, so it’s possible heavy interest will justify production. As of yesterday, Luckey has confirmed that he is in contact with people about the project. Whether we will see the adaptation anytime soon remains unclear, but the prospect of projects based on such a great series is incredibly exciting for any fan.

CLICK: Here are 5 obscure anime you need to check out!