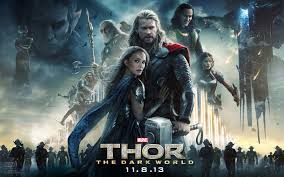 After the moderate success of the first Thor movie and the huge blockbuster of The Avengers, Thor returns in a world-jumping, dark-elf-battling sequel!

“Some believe that before the universe, there was nothing. They’re wrong. There was darkness… and it has survived.”

The Comic Inspiration of Thor: The Dark World

Summary of Thor: The Dark World

A millennia ago, Odin’s father, Bor, clashed with the Dark Elf Malekith, who seeks to destroy the universe using a weapon known as the Aether. After defeating Malekith and his forces on their home world of Svartalfheim, Bor safeguarded the Aether within a stone column. Bor was unaware that Malekith, his lieutenant Algrim, and a handful of Dark Elves escaped into suspended animation.

Flash-forward to present day, Loki is in Asgard waiting to receive his imprisonment for his crimes on Earth. In another realm, Thor fights alongside his warrior comrades in a final battle to pacify the Nine Realms, following the reconstruction of the “Rainbow Bridge” which had been destroyed by Thor two years ago.  The Asgardians soon learn that the Convergence, a rare alignment of the Nine Realms, is coming. As the event approaches, portals linking the worlds begin to appear at random.

Meanwhile in London, Dr. Jane Foster and her intern Darcy find an abandoned factory where portals linking to other worlds have appeared. Through one of these portals, Jane finds herself teleported to another world where she is infected by the Aether that was stored away by Bor. The return of the Aether awakens Malekith, and he turns Algrim into a Kursed, an enhanced warrior.  They prepare to attack Asgard. Heimdall informs Thor that Jane has vanished from his nearly omniscient sight, which prompts Thor to go back to Earth. After Jane inadvertently uses the power of the Aether, Thor brings Jane back to Asgard. While there, Malekith and Algrim attack Asgard in search for Jane, sensing that she contains the Aether. Thor’s mother Frigga is tragically killed protecting Jane. Malekith and Algrim leave without Jane. Thor reluctantly decides to seek the help of Loki, who knows a secret portal to Svartalfheim. They plan to use Jane to lure and confront Malekith, away from Asgard. In return, Thor promises Loki vengeance on Malekith for killing their mother. With the help of Thor’s comrades, he, Loki, and Jane head to Svartalfheim.

Loki tries to trick Malekith into drawing the Aether out of Jane, and Thor attempts to destroy it. He ultimately fails and Malekith merges with the Aether and mortally wounds Loki. The two brothers share a touching last moment before Loki dies. Then Thor and Jane discover another portal in a nearby cave which takes them to London, where they reunite with Darcy and Jane’s mentor Dr. Erik Selvig. He was in a mental hospital due to the mental trauma he suffered when he was mind controlled by Loki in the Avengers. Together, they defeat Malekith by having Thor battle him through various portals, eventually leaving Malekith unopposed on Earth. Thor returns to help the two scientists (and the two interns) use their scientific equipment to transport Malekith back to Svartalfheim, where he is crushed by his own damaged ship.

When all is done, Thor returns to Asgard and he declines Odin’s offer to take the throne. But as he leaves, Odin transforms, revealing himself as Loki.

In a post-credits scene, Volstagg and Sif visit The Collector. They give him the Aether while commenting that, with the Tesseract already in Asgard, having two Infinity Stones so close together would be dangerous. After the two leave, The Collector says, “One down, five to go.” There was another post-credits scene; Thor and Jane reunite on Earth. But, during the battle with Malekith, a frost monster was accidentally transported to Earth, and is still running around somewhere in London.

The best moment was the fight between Thor and Malekith jumping from world to world. The battle was both exciting and hilarious. How could anyone not laugh when Thor took the subway to get back to his fight?  Or his hammer being constantly drawn all over the universe to try to return to its other? 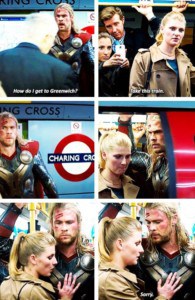 When Dr. Erik Selvig  was institutionalized at the mental hospital, he explained the science behind the Convergence using shoes. Stan Lee was one of the patients who requested that Erik give him his shoe back.

Thor: The Dark World was released in the fall of 2013, a few weeks after Agents of S.H.E.I.L.D (AoS) had only just begun. In the earlier episodes of AoS they were still trying to find their show’s identity. So the “connection” between the show and this film was the AoS crew cleaning up the mess Thor left after his battle with Malekith, which spoiled the ending for those who watched AoS but had not yet seen Thor: The Dark World. In that episode, they were tracking down tech that had been left behind by Asguardians.  Later on in the first season Sif appears on AoS and this after they figure what kind of show they want to be, so she is utilized to her full capabilities.  She has appeared since then, as well.

This movie is an excellent blend of humor, fantasy, science fiction, and action. Being able to pull off all those genres is no simple feat, and doing it in under 2 hours is pretty impressive. The common complaint for this film is that it had a weak villain, but if I’m being honest I didn’t come to see Dark Elves, I came to see Loki. Loki has quickly become a fan favorite, and Tom Hiddleston plays the character perfectly. This movie worked as a continuation for Thor and Loki’s relationship from the first Thor movie. They are at odds with one another after everything Loki did to Thor and his loved ones in both Thor and The Avengers. I loved that this movie forced the two to put their differences aside in order to work together to stop Malekith. 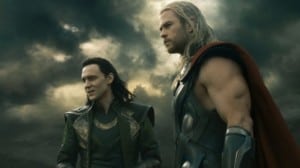 This film has a much wider scope than the previous Thor movie; the last film took place really in only two locations. Having several worlds for the characters to use in this film just made the movie feel bigger. The vastness of this of the world wasn’t the only aspect of this movie that was different from the previous movie; it was a much darker film. Despite the overall dark tone of this film, it still managed to be very amusing. This was mostly due to Hiddleston’s Loki performance; his one-liners are delivered so well. Another aspect that was different from this film when compared to its predecessor is the presence of SHIELD, or lack thereof. They were nowhere in this film, but they weren’t really needed. Overall, the film had good snappy dialogue with characters that got more fleshed out this second time around. The film managed to balance several different genres beautifully without taking itself too seriously, which is something I feel every superhero movie should do. Thor: The Dark World was an excellent follow-up to Thor and The Avengers.

“My life. Father, I cannot be King of Asgard. I will protect Asgard and all the realms with my last and every breath, but I cannot do so from that chair. Loki for all his grave imbalance understood rule as I know I never will. The brutality, the sacrifice, it changes you. I’d rather be a good man than a great King.”

Thor: The Dark World’s Impact on the Marvel Cinematic Universe

Similar to the previous Thor movie, Thor: The Dark World gave audiences another infinity stone, the Aether. The Aether is the reality gem/stone. Its main use in the film was changing matter into dark matter, thus altering the laws of physics. This film also introduced audiences to the Collector, a Marvel supervillian who collects several artifacts to keep them away from Thanos.