So… remember almost eight months ago when I wrote, “rehiring James Gunn back to the GUARDIANS franchise would invite a press storm that would certainly make things far worse before they got better.” Yeah. So I was wrong. Wrong about the firestorm and wrong about thinking there was no way on Earth Gunn would get a second shot at directing GUARDIANS OF THE GALAXY VOL. 3. So now we know a psychic I am not.

Having admitted my failings, I will now share my opinions on the matter. That’s the beautiful thing about being a writer. When you are right, you can brag. When you are wrong? You can write about it. 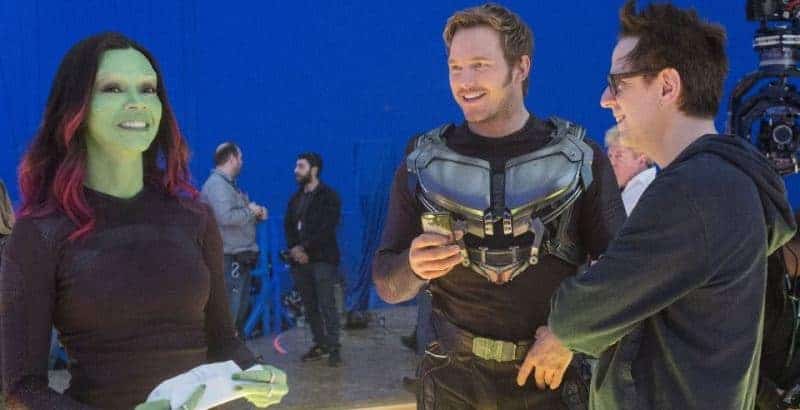 If Zoe Saldana and Chris Pratt were happy back then, I imagine the news of rehiring James Gunn has them thrilled! (Courtesy of Digital Trends)

How Did We Get to Rehiring James Gunn?

The decision to go ahead with rehiring James Gunn undoubtedly gained popularity based on two categories of events. Both of these events could be further reduced down to “did not spark controversy.”

Disney, Marvel Studios’ parent company, is an organization that has little interest in engaging in controversy. They rarely, if ever, seek to ride it out. Instead, they address it quickly, arguably too quickly, and move on. That reaction formation probably explains why most people can name all the Disney controversies that took place since they were about five. However, almost all the controversies failed to derail nearly all those projects’ eventual successes.

The apparent penis castle on the VHS copy of LITTLE MERMAID? The man responsible fired, cover quickly altered, massive hit on the VHS market. The racial issues in ALADDIN? Denied, then apologized for, incredible success in theatres and in the home video market.

Disney’s approach is not foolproof. Feelings that HUNCHBACK OF NOTRE DAME was too dark and too sexualized probably did hurt the project, for instance. However, overall, Disney’s deny, fire, apologize approach has served them well. So the more you can do to show them that the capacity to generate controversy is dead or fleeting, the more likely they are to welcome you back into the fold.

The first of these came, ironically enough, via Marvel Studios’ main superhero-movie-making rival Warner Bros. Warners decided to bring Gunn on to write and direct a SUICIDE SQUAD sequel. As Marvel, and the rest of us, watched, no one raised hell when he got the writing job. Nor when he was promoted to writer-director. And then, when a tentative list of characters was released? A similar silence on the man’s past.

Along the same lines, BRIGHTBURN was announced. While Gunn only produces the film, written by two of his brothers, his name was raised early and often in promotional materials. Again, no pitchforks at the gate. In addition to being, in my opinion, evidence that the outrage was fully doctored in the first place, it showed that Gunn had lost whatever radioactivity he briefly had. 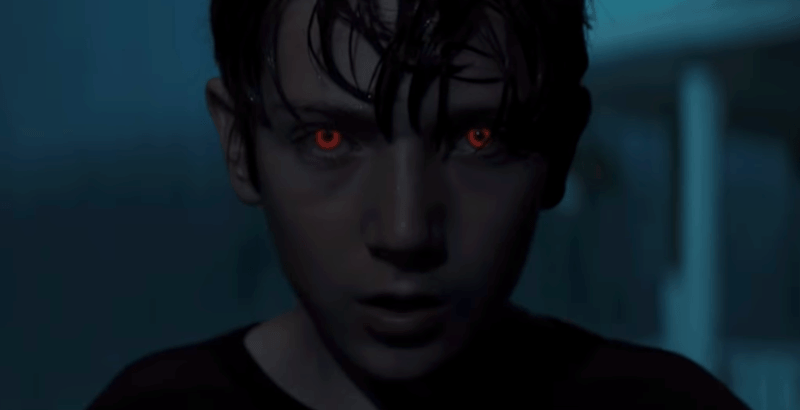 BRIGHTBURN seems like it is about an evil Superman, but I’m sure that can’t be it. (Courtesy of Sony Pictures)

It is not news to anyone, I hope, that a dedicated group of people went in hard on CAPTAIN MARVEL before its release. These individuals and those that screamed for Gunn’s firing probably have several members in common.

However, despite the apparent show of force before CAPTAIN MARVEL opened, it did not translate into results. The trolls have dispersed by the film’s substantial box office. Either that or they left to create new conspiracies to make it seem like they only lost because Disney and Marvel cheated.

This told Marvel Studios something. Those angry voices online? They are not as legion nor as persuasive as they seem. And once a corporation knows that what they thought might hurt their bottom line won’t? Well, they’ll do just about whatever they darn well please.

Simply put, yes, I think it is. To express it with a bit more complexity: yes, but with caveats. Let’s explore that, shall we?

It qualifies as a good thing because Gunn should not have been fired in the first place. As I outlined back in July in the article linked above, Mike Cernovich is a wildly disingenuous figure. He uses bad or controversial jokes from a person’s past to harm them. However, he does not actually care about those who may have been harmed. He only cares about political point-scoring. James Gunn spoke badly about the president so he had to be taken down. Feigning hurt on behalf of marginalized groups for old tweets that Gunn had already apologized for won Cernovich that battle.

You will note, however, when Gunn got hired by Warner Bros. to helm the sequel to SUICIDE SQUAD, Cernovich raised not a peep. If that conservative “lawyer” really gave a damn, he would have been all over that. 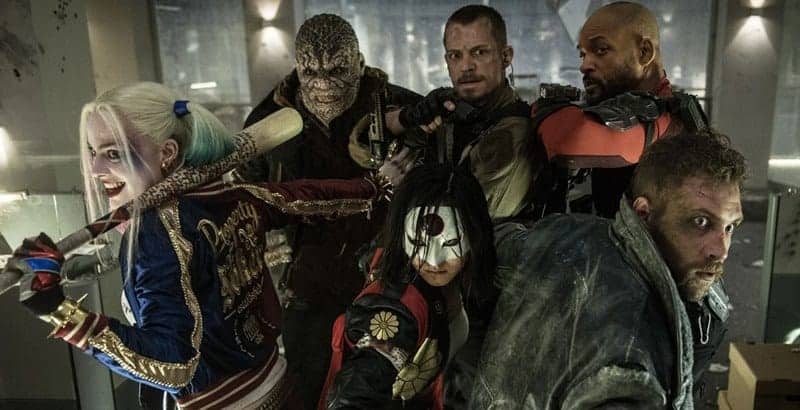 What Does the Past Count?

However, Gunn did still make those jokes. Does he not deserve some kind of punishment? Then, as now, I concluded that we have to allow for people to change. We have to acknowledge people’s changes by not holding them responsible for words — especially words intended not to incite but to bring dark chuckles — that no longer reflect who they are. I will note that this an easier thing for me to say in light of the objecting parties, however.

If Marvel and Disney had responded to that variety of left-of-center groups that first objected to the tweets, would I feel differently? Yes, probably.

Part of that is the groups are authentic in their objections. I will always take the time to consider someone’s point of view who truly feels that they say they feel. I cannot stomach rewarding attempts to silence someone dressed up as outrage, but real outrage? That at least deserves some level of consideration.

The other part is the vast difference between not hiring someone and firing them. To not get a job because of your past is one thing. It can often still prove unfair, but it is part of the hiring process. Prospective employers have options and need ways of drawing distinctions.

However, to have had a job and done it well, much better than many expected, and enriched your employer? That demands a certain level of respect and consideration from your corporate master. Firing someone for things it knew about all along, things that had already been discussed and debated in a public space, things it had to decided to accept? That represents a breach, a refusal to protect someone who has helped the entity immensely out of a fear of some vague controversy.

Waiting Around Just Passing the Time

I did admit that as glad as I am to see Gunn back in the saddle, I feel some disappointment about Marvel Studios seeming lack of interest in hiring someone else. I liked the first two GUARDIANS movies quite a bit. However, a different director with a different sensibility could have also made a GUARDIANS film I really enjoyed.

Once the mistake of forcing Gunn out was made, I wish the studio had pursued women directors, directors of color, or LGBTQIA+ directors to fill his slot. It would have been a great opportunity for another director on the cusp. Additionally, it would be a chance to make amends to the community that first objected to the tweets years earlier — if that’s what anyone really cared about here. 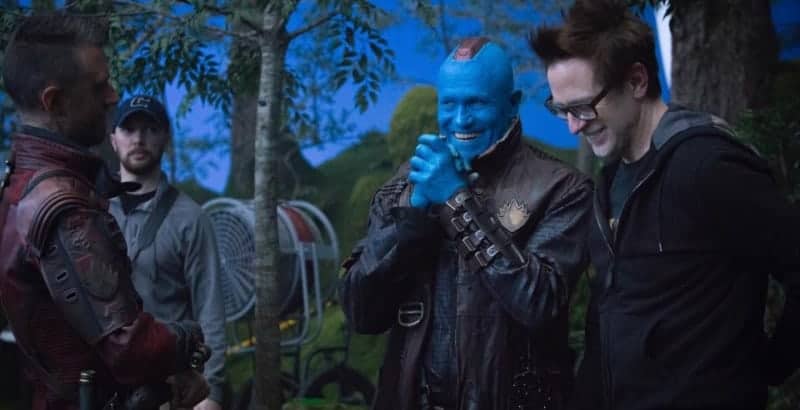 Sean Gunn and Mike Rooker get giddy with James Gunn on the GUARDIANS OF THE GALAXY VOL. 2 set. (Courtesy of Yahoo)

Could You Imagine Rehiring James Gunn If He Was Not White?

One of the things we always must acknowledge when a white man gets a second chance is the reality that a second chance would be a lot less likely for a person of color or a woman. Some have pointed to Roseanne Barr as an example of this. I would argue Roseanne proved a wildly different situation given she espoused beliefs she actually had and did so right up to the moment she lost her job.

However, the point in and of itself is not unfair. When Penny Marshall directed RIDING IN CAR WITH BOYS and it flopped, she disappeared from the film industry. When PAY IT FORWARD forced Mimi Leder into the darkness, she did not get to direct another film for nine years. In reality, it would take another nine after that for her to really get the work she deserved. If not for her role in the new Golden Age of Television, who knows if people would have remembered her skills.

It is wrong and it sucks for sure. However, rehiring James Gunn does not make things worse in this area. A rehiring to erase an unjust firing is a good thing, period. Saying it is bad because he is a white man is a bit like working in the private sector and getting pissed that public workers are treated well while your corporation slowly grinds you to dust. The corporation is wrong, absolutely, but your beef is with them, not with the public sector. The treatment of women and people of color in Hollywood is wrong, certainly. Still, that wrongness lies with the system itself. That’s where the anger should be directed.

What Happens After Rehiring James Gunn?

After being rehired, Gunn will write and direct SUICIDE SQUAD 2 — or whatever it ends up being called. Then he’ll move on to direct GotG 3 from his already written script.

And that’s pretty much it.

Look, I do not want to be cynical here. I would love if this marked a real turning point. It would be stupendous if rehiring James Gunn signals the breaking of Troll Nation’s back. Or that people like Cernovich will now slink into the darkness never to be heard from again. I would love to think that Hollywood’s willingness to forgive Gunn is a sign of things to come. Of a Hollywood that does not rush to soothe conservative objections quickly so they do not become controversies. I would especially enjoy if it led to a fairer sake of directors of color and women directors and that one bad movie would not lead to being exiled. If all that proves true, what a happy day it shall be.

However, ultimately, I do think this is but a drop in the ocean. It does not mean one cannot be excited for the upcoming resulting art or happy to see someone’s work they really like delivering another film in that saga. If one chooses to think of it in the political sense, it doesn’t mean one can’t celebrate a bad decision being reversed.

Alas though, I do not think this spells a trend.

Of course, that does not mean one couldn’t make it the first step.