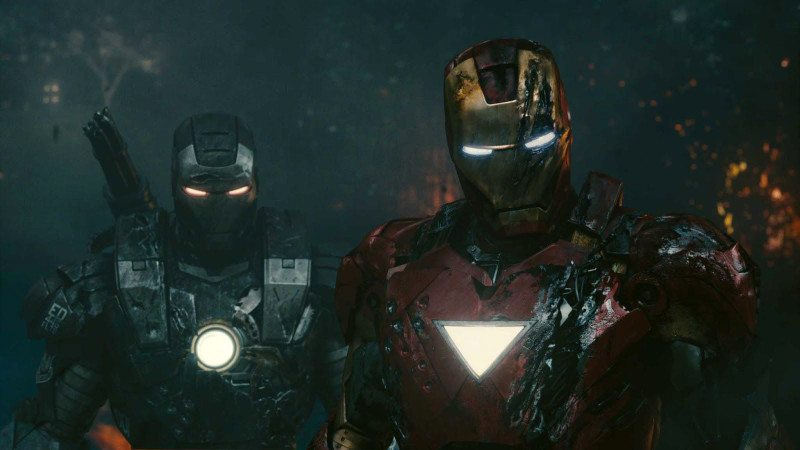 The success of ‘Iron Man’ made it inevitable that Robert Downey Jr. would get a second solo film, even if Marvel were building towards their Avengers epic.  And so Marvel produced a film that served two purposes – both to tell its own story, and to continue to weave the threads of the Avengers franchise.

I’m your nuclear deterrent.  It’s working.  We’re safe.  America is secure.  You want my property?  You can’t have it.  But I did you a big favour.  I’ve successfully privatised world peace.

The Comic Inspiration of Iron Man 2

In a sense, ‘Iron Man 2’ is a strange story, in that it lifts so many elements from so many different Avengers plots.  The character of Whiplash is taken and completely reinvented, bearing no relation whatsoever to versions of Whiplash we’d seen in the comics up till then (comics debuted a redesigned Whiplash in tandem with the film).  James Rhodes debuts, not as an Iron Man replacement, but as War Machine; and the classic ‘Demon in a Bottle’ arc is alluded to, but never explored.  Justin Hammer, a noted industrialist enemy of Tony Stark, plays a key role, while popular Avenger Black Widow makes her debut, played by Scarlett Johansson.

Tony Stark’s life is in turmoil.  The palladium core of his arc reactor – the thing that keeps his heart beating – is slowly killing him.  And the fame he’s acquired as Iron Man is turning against him, when inventor Ivan Vanko seeks an insane revenge and attacks him at the Monaco Grand Prix.  Impressed by Vanko’s performance, Stark’s rival Justin Hammer has Vanko freed from prison, and gives him the chance to build Hammer his own technology.

If you could make God bleed, people will cease to believe in Him.  There will be blood in the water, the sharks will come.  All I have to do is sit back and watch as the world consumes you.

Stark is going increasingly out-of-control, right down to getting drunk while in the Iron Man armour, and his friend James Rhodes is furious.  Rhodes dons a spare set of armour, and the two duke it out, with Rhodes flying off and approaching the military.  There, he becomes War Machine. 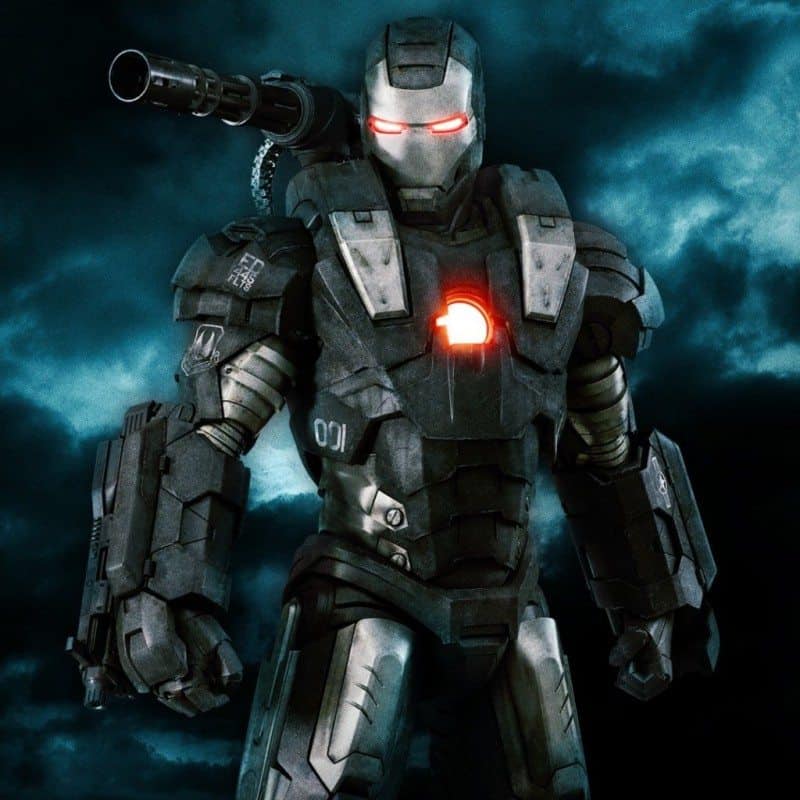 It’s Nick Fury who plays the key role in this film, revealing to Stark that his father – who first designed the arc reactor – was a founder of S.H.I.E.L.D., and that Stark and Vanko’s parents had worked together.  Greed had affected Vanko’s father, who had been deported at the elder Stark’s request.  Fury reveals that a beautiful redhead working at Stark’s company is actually undercover agent Black Widow, and provides the clues for Stark to fix the problems with his arc reactor.

Matters come to a head at a Stark Expo, a major technological fair, which Hammer intended to use to reveal his tech – and which Vanko uses to cause chaos in Stark’s name.  Iron Man and War Machine work together to neutralise Vanko, while Black Widow shows off her skills!

In the aftermath, Stark is told he is not suited to the Avengers due to his (many) character defects.  In a post-credits scene, Agent Coulson reports discovery of a fallen hammer at the bottom of a crater in the New Mexico desert…

This is undoubtedly the moment when Scarlett Johansson struts her stuff, fighting her way through waves of guards.  In the time it takes Happy Hogan to deal with one guard, she’s cut a swathe through the lot! 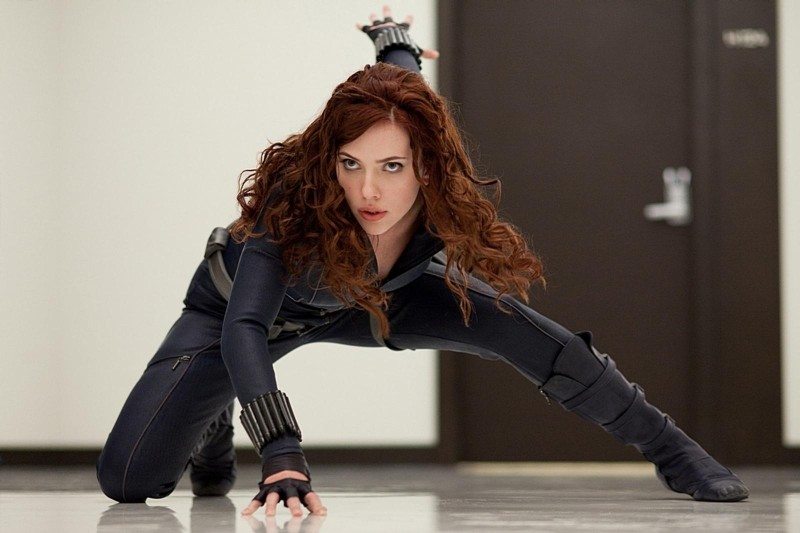 In another case of mistaken identity, Tony Stark mistakes him for Larry King!

When watching the movie first, Nick Fury demoting Tony Stark to “Consultant” makes very little sense.  However, the One-Shot “The Consultant” explains the reasons for this decision and expands upon Incredible Hulk’s post-credits scene.

The One-Shot “Something Funny Happened on the Way to Thor’s Hammer” shows a bit of Coulson’s trip to Thor’s Hammer, and was one of the first showcases of Coulson being a true badass.  While the story of SFHotWtTH isn’t necessary to help your understanding of the MCU, it certainly did bring a new level of appreciation for a character who has since become a fan-favorite (and the head of S.H.I.E.L.D. in Fury’s absence).

Although ‘Iron Man 2’ performed well at the Box Office, to me this was a weaker instalment in the Marvel Cinematic Universe.  There’s simply too much going on; the film borrows from too many themes and concepts in the comics, and, while it knits them all together into an overall enjoyable ride, it’s hard not to feel that the film is more than a tad too ‘busy’.

Robert Downey Jr. excels in his portrayal of Tony Stark, as always, but the character feels a tad off-note when compared to ‘Iron Man’ – as though some of his character development has been regressed in order to tell the tale.  That said, it’s in this movie that I feel Gwyneth Paltrow’s Pepper Potts really starts to shine, and the relationship between Tony Stark and Pepper felt far richer in potential.

Don Cheadle took over the role of James Rhodes, in place of ‘Iron Man’s Terrence Howard, and it’s a wise choice; he seems far more at home in the role, and, by ‘Iron Man 3’, you’ve forgotten Howard ever played the part.

Where this film is most intriguing, though, is in the depth of involvement to the wider Marvel Cinematic Universe.  We learn that Howard Stark was one of the founding members of S.H.I.E.L.D., and there’s a screwy glimpse of a prototype Captain America shield that heavily hints at his involvement in ‘Captain America: The First Avenger’.  Black Widow makes a striking and memorable debut, although the sexy spy is handled in a fairly superficial way; and Thor’s hammer makes a landing, seeding the ground for ‘Thor’.  Unfortunately, in a film that I already feel is too busy, this seems an awkward fit.

Stark’s character flaws are the one arc that really jump from here to ‘The Avengers’.  His S.H.I.E.L.D. assessment is superb, and really sets the scene for the character tension that Joss Whedon would exploit so effectively.

I told you I don’t want to join your super-secret boy-band.

And yet, I think one concept that’s easily overlooked is the discomfort between the U.S. Senate and Tony Stark.  There’s a scene in which Stark refuses to hand over his tech, and it’s eerily reminiscent of a Black Widow scene in ‘Captain America: The Winter Soldier‘.  I suspect those strands will tie together in ‘Captain America: Civil War‘.